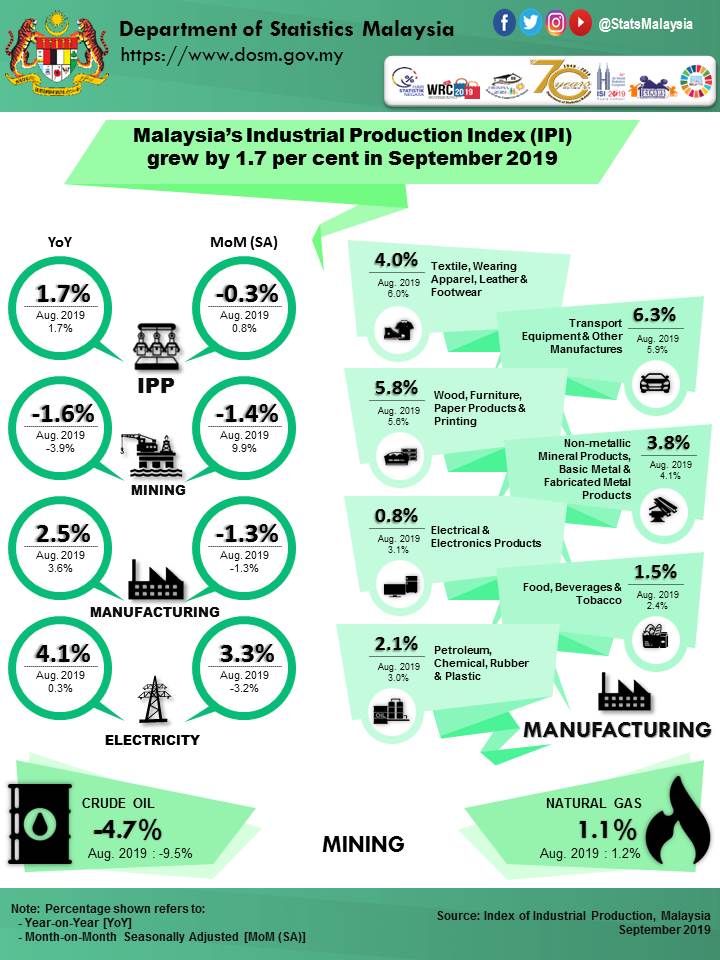 On year-on year basis, the Manufacturing sector output rose by 2.5 per cent in September 2019 after recording a growth of 3.6 per cent in August 2019. The major sub-sectors contributing to the increase in September 2019 were Transport Equipment and Other Manufactures (6.3%), Non-metallic Mineral Products, Basic Metal and Fabricated Metal Products (3.8%) and Petroleum, Chemical, Rubber and Plastic Products (2.1%).

The Mining sector output dropped 1.6 per cent in September 2019 as compared to the same period of the previous year. The decline was due to the decrease in the Crude Oil and Condensate index (-4.7%). Meanwhile Natural Gas index increased by 1.1 per cent.

The Electricity sector output increased by 4.1 per cent in September 2019 as compared to the same month of the previous year.

The IPI of Malaysia for the third quarter 2019 recorded a growth of 1.6 per cent as compared to the same period of 2018. The increase was contributed by the positive growth of Manufacturing index (3.4%) and Electricity index (2.1%). Meanwhile, Mining index declined to 4.7 per cent.

The full publication of the Industrial Production Index, September 2019 can be downloaded through eStatistik portal.

Data for September 2019 is provisional. The data will be updated based on the latest available figures and subsequently published in the October 2019 publication.