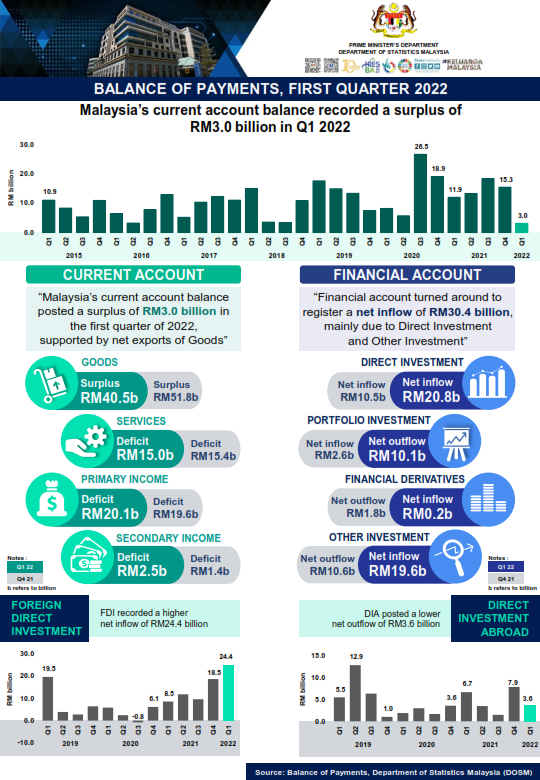 Looking at the performance of services trade, it was observed that exports of Services grew faster than imports. As a result, this account recorded a lower deficit of RM15.0 billion in the first quarter of 2022 compared to a deficit of RM15.4 billion last quarter, supported by higher receipts in Telecommunication, computer and information services and lower payments in Other business services. Based on quarter-on-quarter comparison, exports of Services increased by 2.2 per cent to RM24.0 billion, while Imports rose slightly by 0.2 per cent to RM39.0 billion. The main contributors to services export this quarter were Manufacturing services on physical inputs owned by others, Maintenance and repair; and Telecommunication, computer and information services. Meanwhile, services components that led to the higher imports were Transport, Construction and Travel. However, the deficit in Services account has remained high since the second quarter of 2020, as Travel was hit hard by the pandemic. During January to March 2022, Malaysian residents spent RM4.2 billion abroad, which was higher than the RM0.2 billion spent by foreign travelers in Malaysia, resulting in Travel logged a deficit of RM4.0 billion. In addition, Transport posted a higher deficit of RM9.2 billion owing to the increase in payments for freight activities, in line with the imports of goods.

On the other hand, Primary income account recorded a deficit of RM20.1 billion as compared to RM19.6 billion in the previous quarter. In the first quarter of 2022, foreign companies in Malaysia generated income of RM35.5 billion compared to RM56.9 billion last quarter, mainly through Direct Investment. These companies were largely engaged in Manufacturing and Mining & quarrying sectors with income mostly channeled to the USA, Singapore and the Netherlands. Meanwhile, earnings of Malaysian companies from their activities abroad amounted to RM15.3 billion from RM37.3 billion in the preceding quarter, especially in Direct Investment. Most of these companies were based in Singapore, the USA and Australia, principally in Mining & quarrying sector and Financial activities.

The Financial account recorded a net inflow of RM30.4 billion this quarter compared to RM0.7 billion in the previous quarter. This was mainly contributed by Other Investment which turned around to a net inflow of RM19.6 billion from an outflow of RM10.6 billion in the preceding quarter, due to higher interbank borrowings by financial institution abroad. In addition, net inflows of RM20.8 billion in Direct investment was attributed by higher settlement of exports and loans from abroad which also led to the inflows in Financial account.

In terms of investment, Foreign Direct Investment (FDI) expanded by RM5.9 billion to record a net inflow of RM24.4 billion for the first quarter. As observed in Direct investment, the inflow was mainly contributed by higher settlement of trade credits by affiliates abroad and injection of equity. Manufacturing sector remains the main attraction for foreign investors in Malaysia, followed by the Services primarily in Financial and Wholesale & retail trade activities. The main sources of FDI came from Switzerland, the USA and Hong Kong. In the meantime, Direct Investment Abroad (DIA) recorded a lower net outflow of RM3.6 billion compared to RM7.9 billion in the preceding quarter, which was due to higher inflow in debt instruments. The major contributors to the outflows were Services, particularly in Financial activities, followed by Manufacturing and Agriculture sectors. The top three DIA destinations were Indonesia, Singapore and Brazil.

Moving forward, the economy will likely perform better than last year in the coming months after the transition to the endemic phase of COVID-19. With the reopening of the nation’s borders starting from 1 April 2022 to travelers from all countries, it is expected to boost the Travel component and subsequently will revive the Services sector. This is also anticipated to have a direct impact on the Transport, especially in the form of higher receipts from air passengers.

The full publication of  Quarterly Balance of Payments, First Quarter 2022 can be downloaded through eStatistik portal. 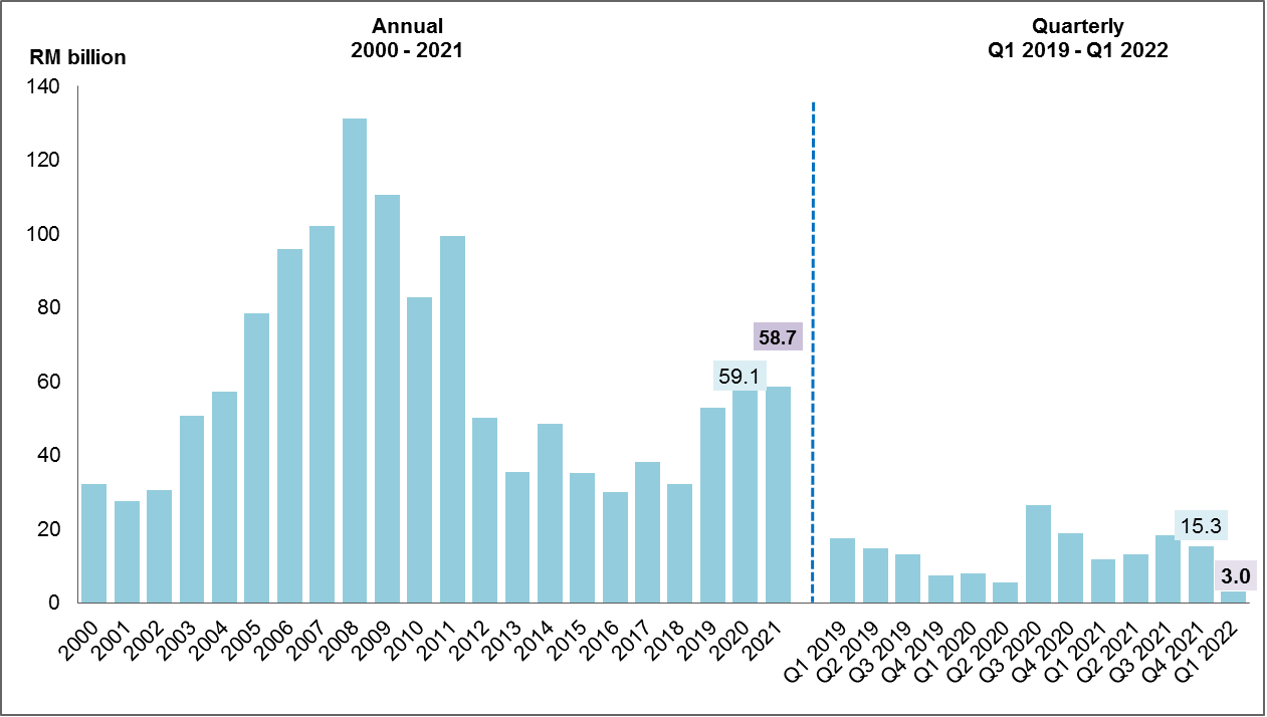 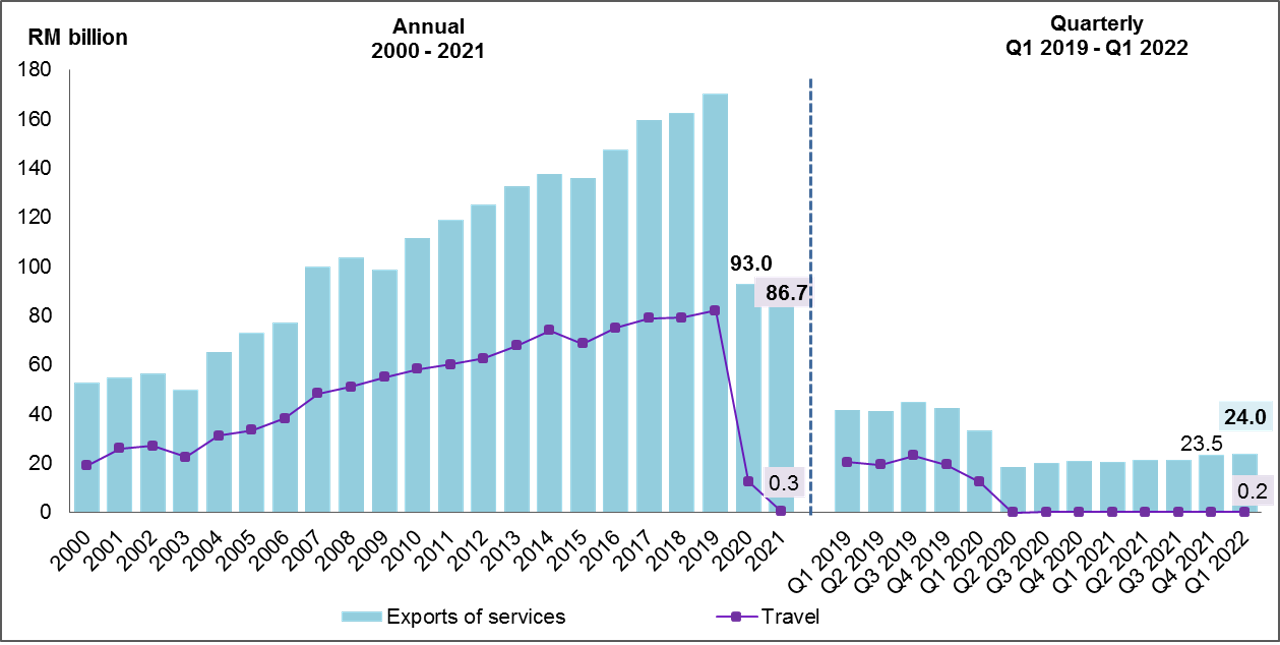