The current account surplus in this quarter was led by higher net exports of goods at RM42.9 billion. Exports of goods which contributed 91.4 per cent to overall Malaysia’s exports recorded RM217.5 billion from RM204.9 billion in the previous quarter. The increase was supported by exports of Palm oil, Rubber and Chemicals based products; primarily to China, Singapore and USA. Similarly, imports of goods surged by 6.9 per cent quarter-on-quarter to record RM174.6 billion. The higher imports contributed by the increase in intermediate, capital and consumption goods mainly from China, Singapore and Japan.

The current account surplus in the final quarter was also driven by the lower deficit in Primary income. The net deficit of Primary income narrowed to RM7.1 billion as compared to RM9.2 billion in third quarter of 2020. Malaysian companies abroad earned higher income of RM14.6 billion, an increase of 28.5 per cent from the preceding quarter. Companies located in Indonesia, Singapore and USA were the major contributors and mainly in Financial, Manufacturing and Information & communication sectors. Meanwhile, foreign companies in Malaysia also earned higher income of  RM21.7 billion and mainly from Manufacturing and Financial sectors.

Nonetheless, Services logged a higher deficit of RM14.2 billion as compared to earlier quarters in 2020 due to Transport, Construction and Travel. Both exports and imports of Services increased by RM0.7 billion and RM1.7 billion to record RM20.5 billion and RM34.7 billion respectively.

Services registered a deficit of RM48.0 billion in 2020, the highest deficit ever recorded. This was the repercussion of border closure and travel restrictions in response to contain the COVID-19 virus, thus Travel being the key component of Services was hit severely. The Tourism related activities in Malaysia are still grappling to find ways to sustain their businesses since number of international tourists has nosedived. As such, Travel logged a deficit of RM7.8 billion for the first time in thirty years.

Transport, the second largest contributor in Services recorded a higher deficit of RM27.5 billion compared to RM25.9 billion in 2019. Exports of transports accounted for RM13.4 billion, a decrease of RM8.2 billion from the previous year due to the decline in air passengers. In line with the decrease in tourist arrivals, exports of air passenger declined to RM1.6 billion in 2020 from RM9.8 billion in the preceding year. Meanwhile, lower payments were recorded for freight activities in transport conforming to the decline in imports of goods. Nevertheless, during this pandemic, the rising demand for online shopping and businesses have led to the increase in exports of courier services under Transport. Apart from that, the new norm of working from home and higher subscriptions of online movies via streaming has increased the imports of Telecommunication, computer and information services.

On the Financial front, this account marked a higher outflow of RM79.1 billion in 2020 as against RM33.8 billion a year ago. This owing to higher outflows in Portfolio assets and Other investment. FDI showed a net inflow of RM13.9 billion as against RM31.7 billion. Although, the FDI flow decreased, the FDI position surged by RM14.4 billion to record RM703.5 billion in 2020. Meanwhile, DIA recorded a net outflow of RM14.1 billion as compared to RM26.1 billion in the previous year.

The full publication of  Quarterly Balance of Payments, Fourth Quarter 2020 can be downloaded through eStatistik portal. 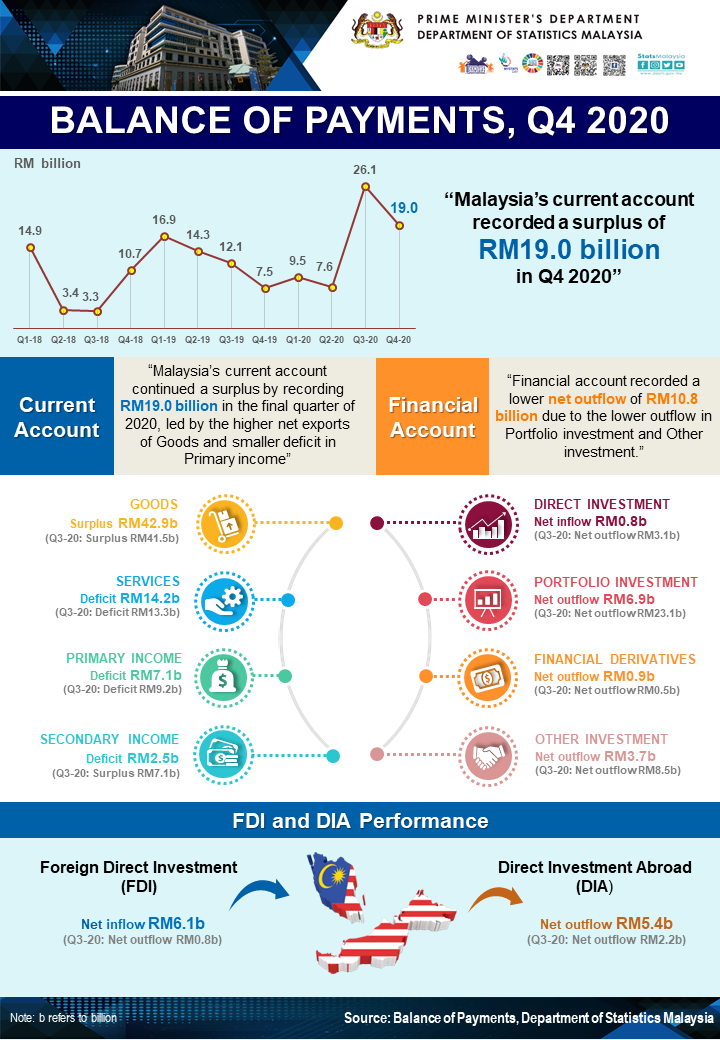