Malaysia’s Current Account Balance (CAB) recorded a surplus of RM12.3 billion in the first quarter of 2021 as against RM18.6 billion in the previous quarter. Goods account registered net exports of RM36.6 billion as compared to RM42.6 billion in the previous quarter. Exports of goods increased to RM225.5 billion from RM217.2 billion in the fourth quarter of last year. The main exports were Electrical & Electronics, Rubber and Chemicals based products; principally to China, Singapore and USA. Concurrently, the imports of goods surged by RM14.3 billion to record RM188.9 billion as against the preceding quarter. The increase in intermediate and capital goods which were mainly from China, Singapore and Japan resulted to the higher imports of goods in this quarter.

The current account surplus in the first quarter was also supported by the lower deficit in Primary income. The net deficit of Primary income narrowed to RM5.7 billion as compared to RM7.2 billion in fourth quarter of 2020. This was mainly contributed by Malaysian companies abroad earning higher income of RM17.3 billion, an increase of 19.1 per cent from the preceding quarter. Most of the sectors were Financial, Mining and Manufacturing which primarily located in Singapore, Indonesia and USA.

Nevertheless, Services logged a higher deficit of RM15.0 billion as compared to the fourth quarter of 2020 due to Travel, Construction and Other Business Services. The continuous closure of border caused by the pandemic has led Travel, the major contributor of Services, to remain in the negative trend by recording a deficit of RM3.4 billion.  Adding to this, the higher deficit in Services was further attributed by Other Business Services which recorded a deficit of RM0.8 billion especially for payments in technical and trade related services, as well as Construction at a deficit of RM0.7 billion owing to new projects. Exports of Services declined by 1.9 per cent quarter-on-quarter to RM20.3 billion in the first quarter of 2021 while imports increased by 1.4 per cent to record RM35.2 billion.

In the first quarter of 2021, financial account turned around to register a net inflow of RM16.0 billion from a net outflow of RM10.2 billion in the previous quarter. This was credited by higher inflow in Other investment at RM13.9 billion, mainly contributed by interbank borrowing from abroad. Meanwhile, Foreign Direct Investment (FDI) recorded a net inflow of RM9.1 billion as compared to RM6.8 billion last quarter. The FDI inflow was primarily channelled into Manufacturing, Financial and Wholesale & retail trade sectors; particularly from Singapore, United Kingdom and Netherlands. Simultaneously, Direct Investment Abroad (DIA) also registered a higher outflow of RM7.8 billion as against RM5.2 billion in the final quarter of last year. Financial, Mining and Manufacturing were the major sectors for DIA while the main destinations were Canada, Indonesia and Singapore.

The full publication of  Quarterly Balance of Payments, First Quarter 2020 can be downloaded through eStatistik portal. 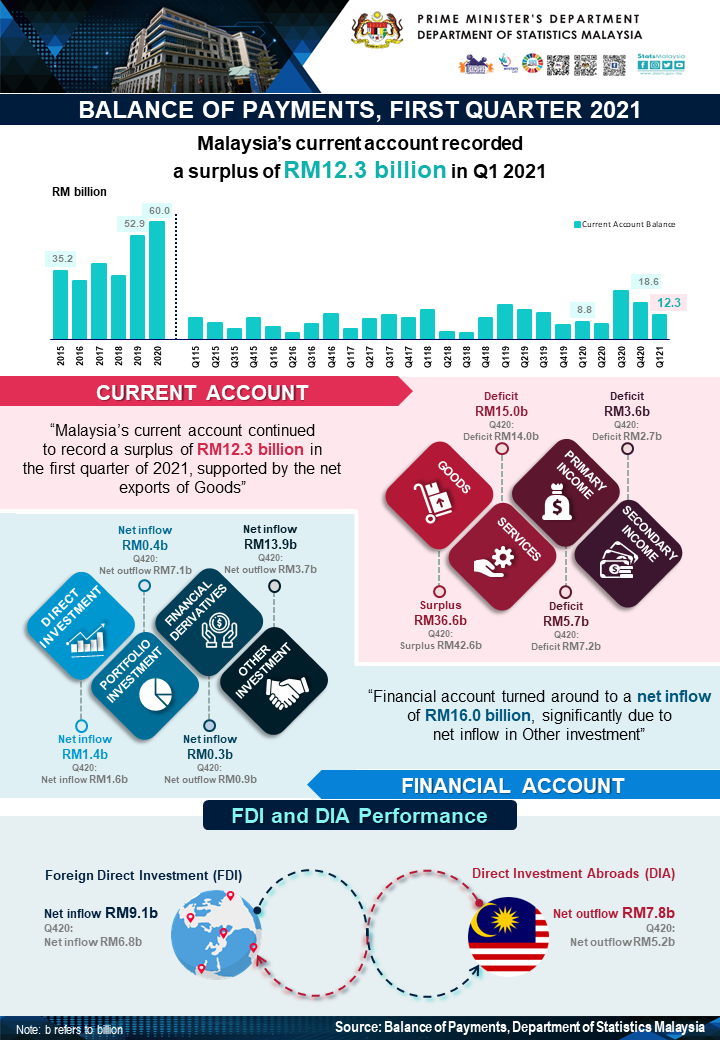