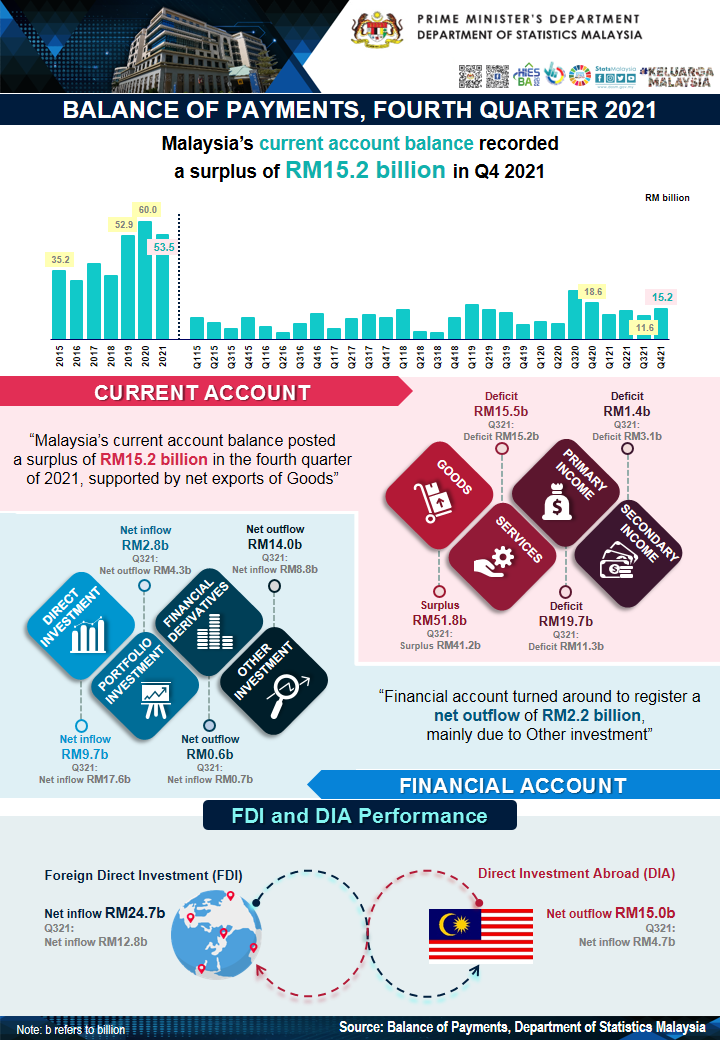 Malaysia’s Current Account Balance (CAB) continued to record a surplus of RM15.2 billion in the final quarter of the year 2021. The current account surplus in the fourth quarter of 2021 was driven by the exceptionally high net exports of goods with the double-digit growth in prices of commodities. The Goods account registered a net exports of RM51.8 billion, the highest since the third quarter of 2008 (RM50.9 billion). Exports of goods with a contribution of 92.0 per cent to overall Malaysia’s exports grew at a faster rate to log RM271.3 billion from RM236.6 billion in the previous quarter. The increment of 14.7 per cent was a result of the higher exports of Electrical & Electronics (E&E), Palm oil and Chemicals based products; predominantly to China, Singapore and the USA. Concurrently, imports of goods went up 12.3 per cent quarter-on-quarter to record RM219.5 billion. In this quarter, Intermediate, Capital and Consumption goods were imported mainly from China, Singapore and Taiwan.

Besides Goods account, the current account surplus in the final quarter also backed by the lower deficit in Secondary income account at RM1.4 billion as against RM3.1 billion deficits last quarter. The receipts ascended by 47.6 per cent to post RM6.4 billion as compared to the preceding quarter following higher inflow of remittances by Malaysian residents working abroad. Meanwhile, payments also increased to RM7.8 billion from RM7.4 billion in the third quarter of 2021.

The Services account recorded a higher deficit of RM15.5 billion in the fourth quarter of 2021 from a deficit of RM15.2 billion last quarter. Exports of Services rose by 10.1 per cent to record RM23.6 billion, while Imports also increased by 6.6 per cent to RM39.1 billion. This was due to higher deficit in Transport, Telecommunication, computer and information as well as continuous deficit in Travel. Transport posted RM8.8 billion deficits, higher by 0.8 billion as opposed to the preceding quarter mainly contributed by the increased imports of freight activities. As for Travel, inbound expenditure rose to RM209.3 million as against RM58.8 million in the previous quarter. This was following the government’s efforts by introducing the Langkawi International Travel Bubble programme and the reconnection initiative between Malaysia and Singapore through Vaccinated Travel Lane (VTL) to fully vaccinated travelers which contributed to the increase in tourist arrivals in this quarter. However, the higher deficit of RM3.8 billion in Travel was a result of outbound expenditure which valued at RM4.0 billion, exceeding the inbound expenditure.

Similarly, the Primary income account recorded a higher deficit of RM19.7 billion as against RM11.3 billion in the previous quarter. This was mainly owing to higher income earned by foreign companies in Malaysia which amounted to RM53.8 billion, particularly in Direct Investment. These companies were largely involved in the Financial activities and Manufacturing sector where the income was mostly channelled to the USA, Singapore and the Netherlands. Meanwhile, Malaysian companies abroad also earned higher income of RM35.6 billion as compared to RM16.4 billion in the preceding quarter, especially in Direct Investment. Most of these companies were located in the Netherlands, Singapore and Indonesia that principally engaged in Financial activities and Agriculture sector.

Financial account turned around to register a net outflow of RM2.2 billion in this quarter, from a net inflow of RM22.8 billion in the previous quarter. This was mainly contributed by net outflow in Other Investment of RM14.0 billion which was reflected by higher interbank lending and placement of deposits by residents with financial institutions abroad.

Meanwhile, Foreign Direct Investment (FDI) expanded by RM11.9 billion to record a net inflow of RM24.7 billion for this quarter, the highest since COVID-19 outbreak. The inflows were mainly contributed by higher reinvestment of earnings. Manufacturing sector remained as the main attraction for foreign investors in Malaysia, followed by Financial and Mining & quarrying. The main FDI sources were from the USA, the Netherlands and Republic of Korea. In the meantime, Direct Investment Abroad (DIA) switched to net outflow of RM15.0 billion from a net inflow of RM4.7 billion in the preceding quarter driven by debt instruments. The major sectors which contributed to the outflows were Services particularly in Financial activities, followed by Construction and Manufacturing. The top three DIA destinations were the Netherlands, Switzerland and Canada.

Although Malaysia has faced economic uncertainties due to the prolonged COVID-19 crisis which spread around the world starting 2020, the country’s CAB was persistently recording a surplus of RM53.5 billion. The CAB contributed 3.6 per cent to Gross National Income (GNI) which exceeded the earlier official forecast by Ministry of Finance (MOF) at 1.3 per cent. This was largely buoyed by net exports of goods at RM170.2 billion. Exports of goods recorded RM977.4 billion mainly in E&E, Chemicals and Petroleum based products. Meanwhile, imports of goods posted RM807.2 billion primarily in E&E products. The main destinations for both exports and imports were China, Singapore and Taiwan.

Nevertheless, the Services registered the highest deficit of RM61.1 billion in 2021 as Travel deficit has widened to RM14.6 billion. Exports of Travel nosedived 96.8 per cent to log RM0.4 billion, aptly owing to the inevitable ramification of border closure for international tourist arrivals as measures to contain the spike in COVID-19 cases during the month of January to October 2021. Moreover, Transport recorded a higher deficit of RM32.5 billion as compared to RM27.4 billion in the previous year. Both exports and imports of this component increased to RM15.4 billion and RM47.9 billion respectively, in line with the surge in Goods trade and higher freight cost in 2021. On a positive note, there were services components that showed better performance in 2021 such as Construction whereby mega projects have started to show progress and; Personal, cultural and recreational services were particularly backed by a boost in online sports activities.

Financial account for the year of 2021 switched to net inflow of RM29.7 billion from a net outflow of RM76.2 billion in 2020, due to higher inflows in Direct investment and Portfolio investment. Meanwhile, FDI inflows in 2021 surged to RM54.9 billion as against RM14.6 billion recorded in the last year. Concurrently, DIA also recorded higher net outflow of RM22.1 billion as compared to RM11.9 billion in the preceding year.

As at the end of 2021, both FDI and DIA position expanded to RM796.3 billion and RM556.7 billion, respectively. Malaysia’s International Investment Position (IIP) registered a net asset of RM91.0 billion, while Malaysia’s international reserves stood at RM486.7 billion.

Based on the Malaysia’s Economic Outlook 2022 by Ministry of Finance Malaysia, the CAB is projected to record RM55.6 billion. Hence, the Malaysia’s economy in the year 2022 is expected to see a resilient recovery since all business activities have gradually return to pre-pandemic normalcy following the effective government’s initiatives such as fully vaccination roll-out programme and cautiously easing the border restrictions for fully vaccinated international passenger arrivals since November last year.

The full publication of  Quarterly Balance of Payments, Fourth Quarter 2021 can be downloaded through eStatistik portal. 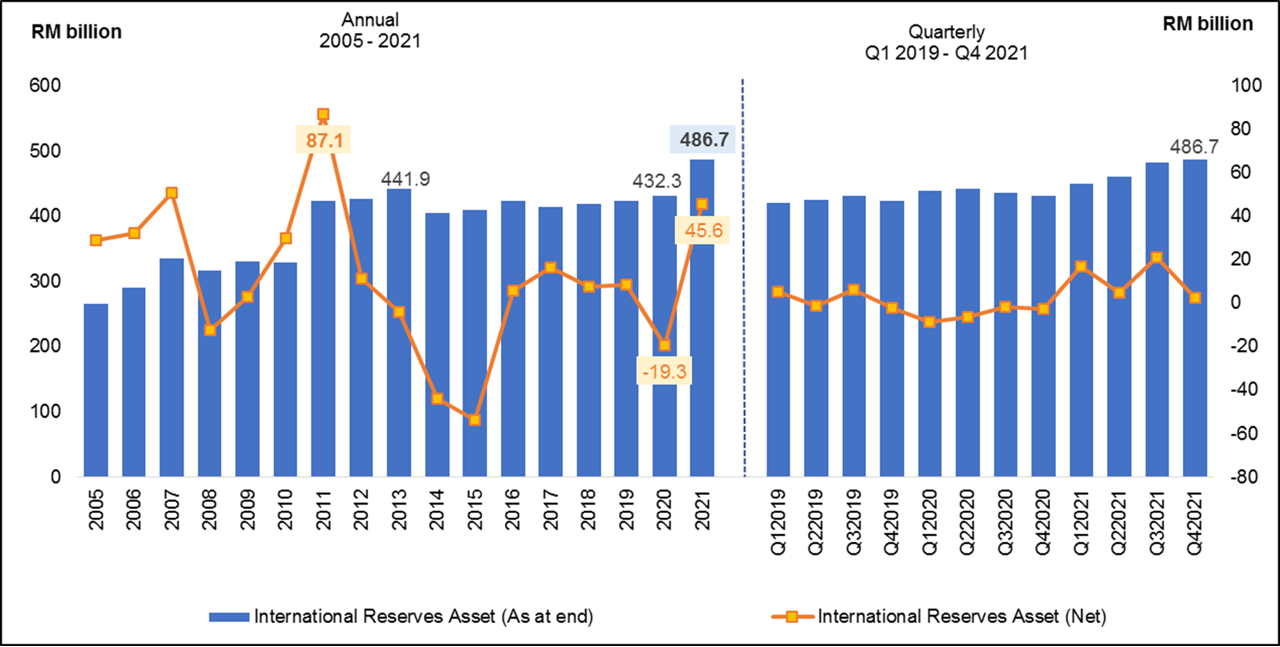