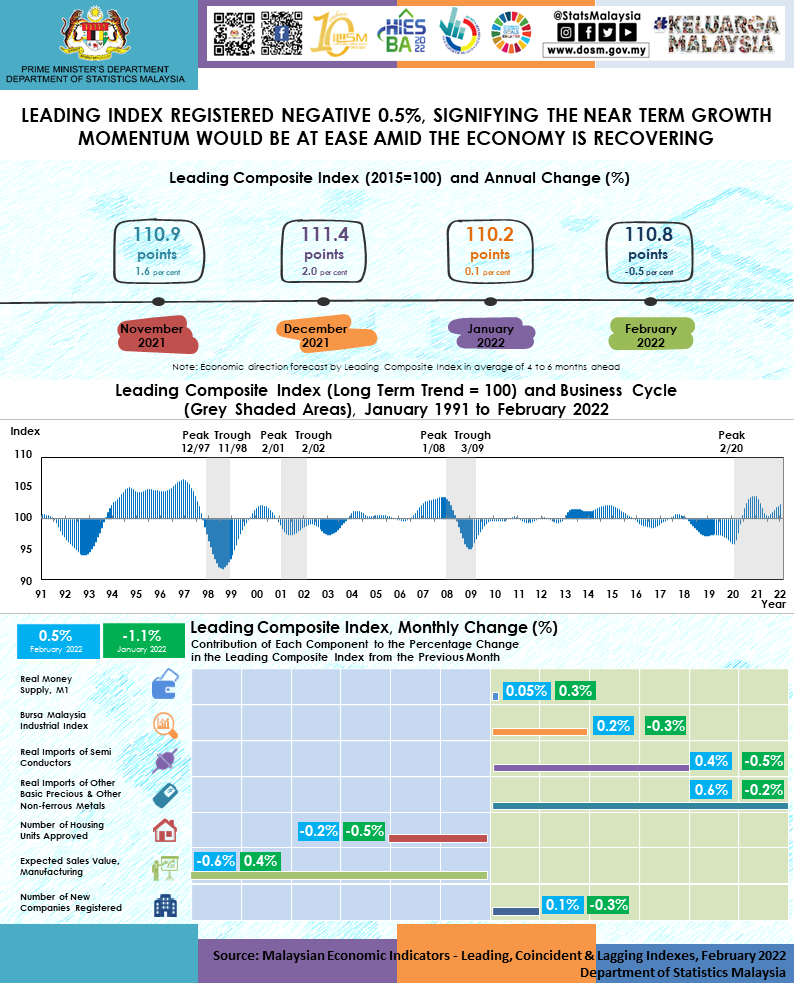 Leading Index registered negative 0.5%, signifying the near term growth momentum would be at ease amid the economy is recovering

The annual Leading Index (LI) showed a slower performance at negative 0.5 per cent in February 2022. This was influenced by cautious investor sentiment on stock markets which was reflected by the down trend of the Bursa Malaysia Industrial Index, backed by the Healthcare Index and Utilities Index during the month. However, in view of direction, a healthier trend was observed in LI by reaching 110.8 points in February 2022 from 110.2 points recorded in January 2022. The month-on-month LI increased to 0.5 per cent during the reference month (January 2022: -1.1%), mainly determined by the significant contribution from Real Imports of Other Basic Precious & Other Non-ferrous Metals (0.6%), Real Imports of Semi Conductors (0.4%) and Bursa Malaysia Industrial Index (0.2%). The smoothed growth rate of LI is consistent above the trend, indicating that the Malaysian economy is bound to continue its journey to recovery although the growth momentum would be at ease in the near term. The international crises that happened currently had exerting further pressure on global economic growth through trade, inflation and financial markets, which in turn could disrupt the growth prospects of the Malaysian economy.

Pertaining to current economic perspective, the Coincident Index (CI) sustained its growth by expanding 6.4 per cent to 120.4 points in February 2022 as opposed to 113.2 points during the same month of the previous year. In view of monthly performance, the CI rose by 0.1 percentage point to 2.6 per cent in February 2022 as compared to 2.5 per cent in the preceding month. The growth was primarily buoyed by the increment in Capacity Utilisation in Manufacturing sector (0.9%) and Volume Index of Retail Trade (0.9%).

The full publication of the Malaysian Economic Indicators: Leading, Coincident & Lagging Indexes, February 2022 can be downloaded through eStatistik Portal.