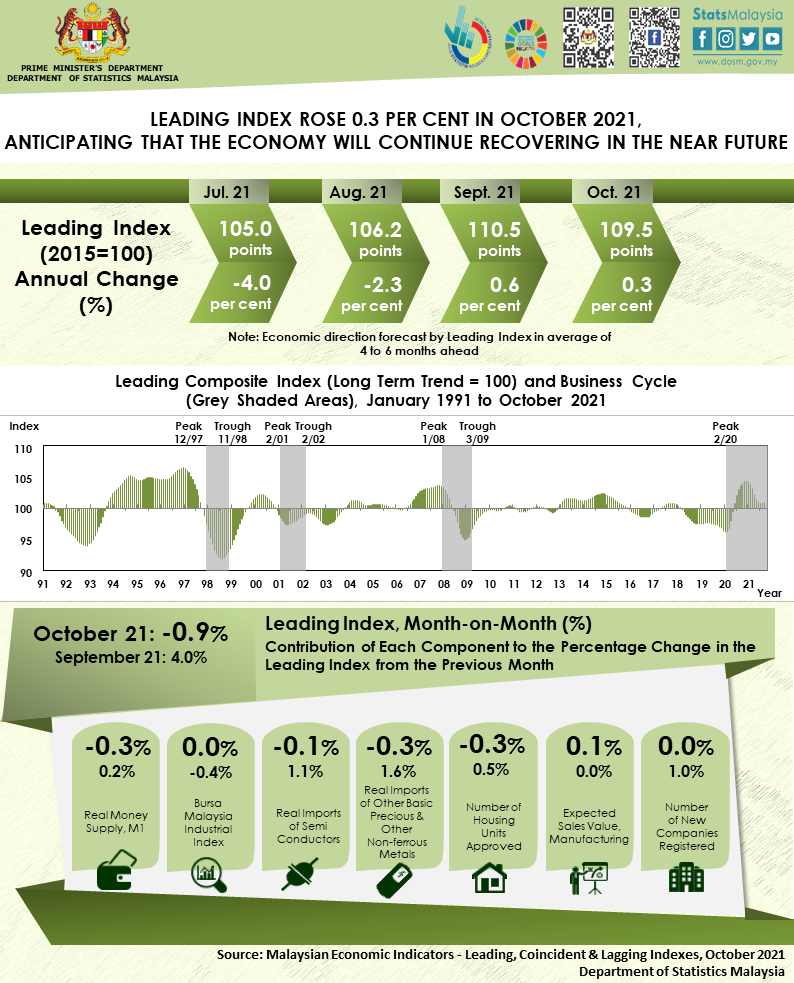 Leading Index rose 0.3 per cent in October 2021, anticipating that the economy will continue recovering in the near future

The annual Leading Index (LI) posted an increase of 0.3 per cent to attain 109.5 points in October 2021 after registering 0.6 per cent in September 2021. Real Imports of Semi Conductors remained as the major contributor to the increase in LI with positive demand for electronic integrated circuits. In the meantime, LI contracted by 0.9 per cent in the reference month as against the previous month. Real Money Supply, M1, followed by Real Imports of Other Basic Precious & Other Non-ferrous Metals and Number of Housing Units Approved attributed primarily to the decline of LI with each component recorded a negative 0.3 per cent. The performance of LI in October 2021 remained positive with the smoothed LI continued above the long-term trend and moving upwards. Based on the scenario, a more promising outlook is anticipated in the near term if gradual normalcy of economic activities persists. In addition, the progressive lift of the restrictions in mitigating the economic impact, together with the resumption of inter-state travelling brought positive vibes to the economy in regaining its growth momentum.

Throughout October 2021, the economy continued to improve as more states had moved into the next phases of the National Recovery Plan (NRP). Correspondingly, the current economic performance through the Coincident Index (CI) showed a better momentum by further increased to 2.1 per cent in October 2021 (September 2021: 0.3 per cent) to reach 113.3 points as opposed to 111.0 points recorded in October 2020. Furthermore, CI continued to record a positive month-on-month growth of 0.8 per cent in the reference month. This growth was significantly attributed by the increase in Volume Index of Retail Trade (0.4%) and Total Employment in Manufacturing sector (0.3%).

The full publication of the Malaysian Economic Indicators: Leading, Coincident & Lagging Indexes, October 2021 can be downloaded through eStatistik Portal.