In 2020, the world has been hit by the unprecedented event of COVID-19, causing the worst economic downturn in Malaysia since the last declined in 1998. The implementation of various Movement Control Order (MCO) to contain the spread of COVID-19 has led to the increase in the number of job losses and subsequently rise in the country’s number of unemployment by 200 thousand to record 718.1 thousands persons in 2020. New entrants to the labour markets especially fresh graduates are no exception, affected by the pandemic. Competition of getting jobs among the graduates are getting more challenging with the presence of more unemployed persons who lost their jobs during the pandemic.

To mitigate the impact of COVID-19 pandemic, various initiative has been rolled out by the Government. For instance, National Economic Recovery Plan (PENJANA) amounted to RM35 billion. Among the initiatives in PENJANA are Wage Subsidy Programme which promote employee retention and reduce layoffs; Hiring and Training Assistance for Businesses in order to encourage hiring of employees by providing financial incentives to employers; and Reskilling and Upskilling Programmes which aimed to enhance employability among youth and unemployed persons. Additionally, PENJANA KPT-CAP Programme covered three sub-programmes namely Place and Train, Entrepreneurship and Gig Economy intended to address the challenges of graduate employability and unemployment.

Graduates Statistics 2020 presents the statistics of graduates in and outside labour force as well as graduate’s earning in Malaysia. Various data sources were used in compiling the statistics namely Labour Force Survey, Higher Education Statistics, Graduate Tracers Study, Graduate Tracers Study TVET and Salaries & Wages Survey. Graduates are defined as individuals with the highest certificate obtained from universities, colleges, polytechnics, recognised bodies or equivalent, in which the duration of study is at least two years. Graduates are classified into two categories of certification namely Diploma and Degree. 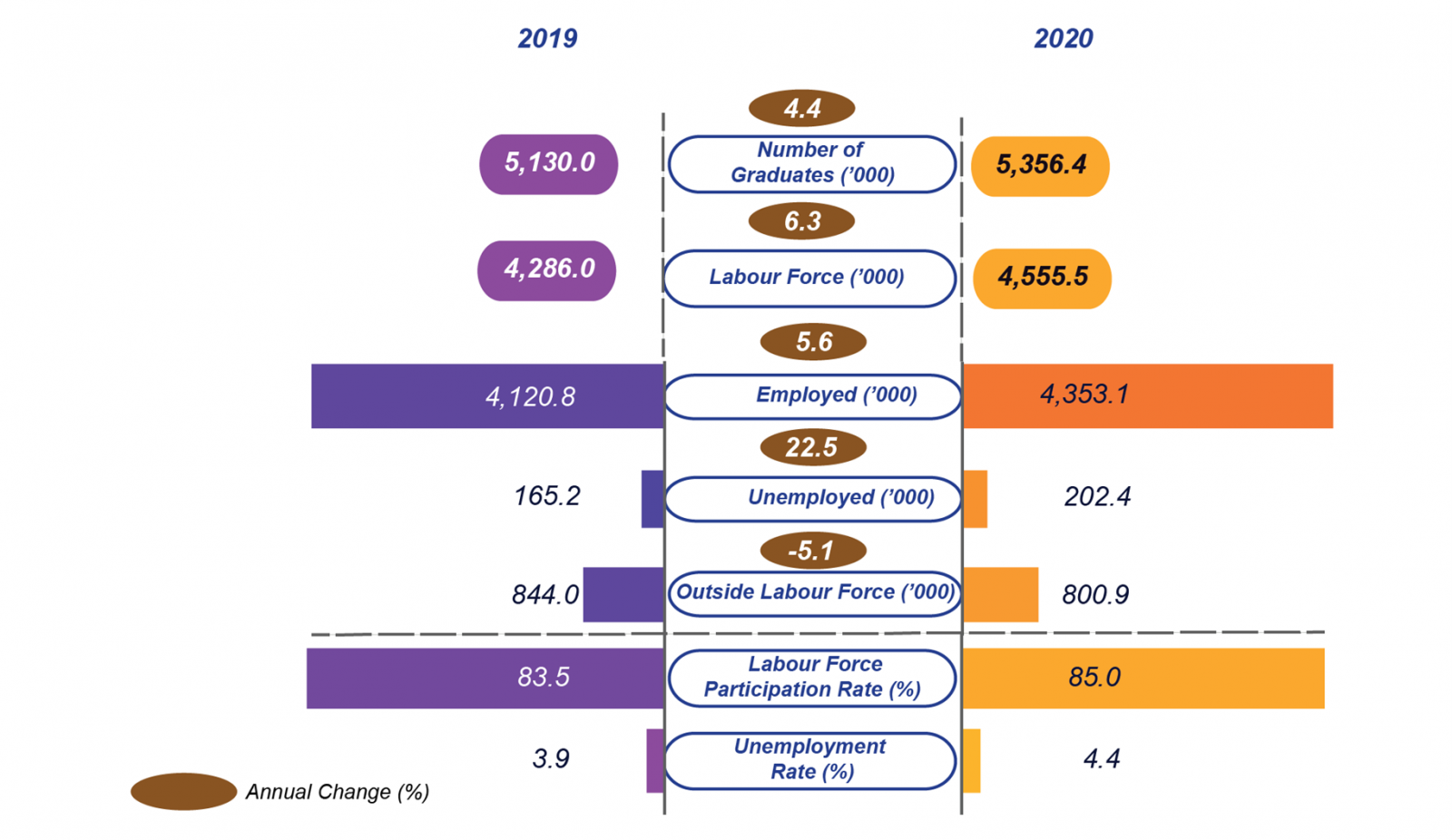 From the occupation perspective, 68.8 per cent or 3.00 million employed graduates were in skilled category with 40.8 per cent of them worked in Professional occupations (1.78 million persons), followed by Technicians and associate professionals at 17.2 per cent (749.5 thousand persons).

Graduates who worked in semi-skilled and low-skilled occupation categories comprised of 31.2 per cent. This group of graduates could be classified as mismatch in occupation as they did not fully utilise their education and skills. Employed graduates in semi-skilled category accounted for 28.9 per cent or 1.26 million persons and were largely in Service and sales workers (11.9%), followed by Clerical support workers (9.6%) and Craft and related trades workers (3.4%). The remaining of 2.3 per cent were employed in low-skilled category with 98.1 thousand persons.

Apart from unemployment indicator to reflect the inefficiency of the labour market, indicators on underemployment were used to identify underutilised labour in terms of time and skills. Graduates who were in time-related underemployment category which worked less than 30 hours per week and able and willing to work more hours increased in 2020, reflected by limited working hours during the year correspond to the MCO. The number of graduates in this category was 83.8 thousand persons with a rate of 1.9 per cent (2019: 35.6 thousand persons; 0.9%).

Deep dive into skill-related underemployment situation, which are indicated by the graduates who worked in semi-skilled and low-skilled category. The rate increased to 31.2 per cent recorded 1.36 million persons in 2020 (2019: 1.10 million persons; 26.7%). Skill-related underemployment could be classified as structural issue of labour market as the number of employed graduates in this category was high even before the COVID-19 pandemic.

Analysis on the reasons for not seeking work found that more than 35 per cent who were outside labour force due to Housework/ family responsibility accounted for 315.7 thousand persons in 2020. 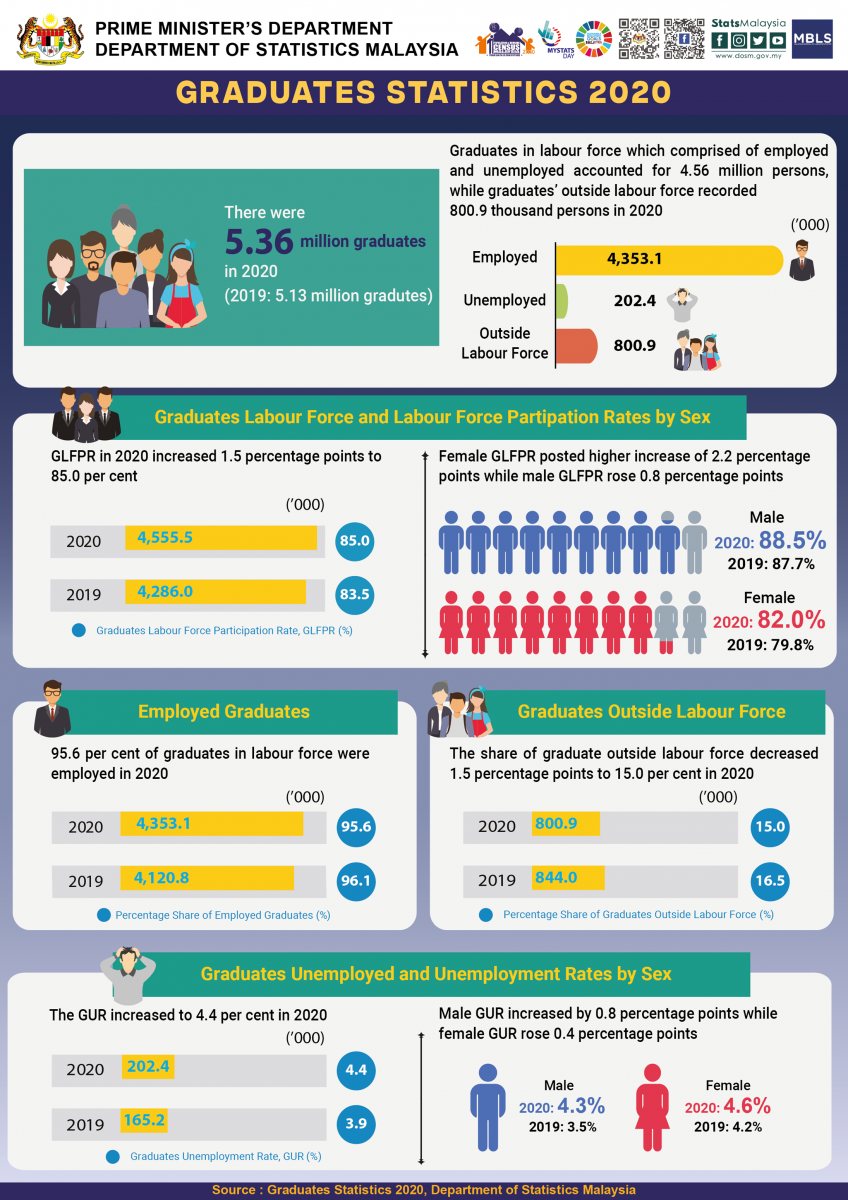 The detailed information and technical notes are published in the publication of Graduates Statistics, 2020. This publication is accessible and downloadable free of charge through the eStatistik application in DOSM web page, www.dosm.gov.my.