The year 2021 had observed the unprecedented COVID-19 public health crisis prolonged in the second year after the World Health Organisation announced the virus as a global pandemic in March 2020. The continuously high number of daily cases and deaths posted challenges to countries around the world in executing strategies and initiatives towards social and economic recovery. Since Malaysia too was no exception to the challenging situation in 2021, a more targeted and strategic mechanism was exercised throughout the year to protect lives, reduce the burden of the public health system and ensure the livelihood of the nation.

Numerous initiatives were rolled out by the Government to cushion the impact of COVID-19 pandemic towards multiple groups including employers & employees, micro, small & medium enterprises (MSMEs), graduates and youths. The overarching stimulus package namely National Economic Recovery Plan (PENJANA) which encompassed an allocation of RM35 billion was an inclusive and holistic approach for supporting Malaysia’s economic recovery. Among the initiatives in PENJANA were The Hiring Incentive Programme, an economic recovery initiative to promote job creation among employers while increasing employment prospects. Additionally, PENJANA KPT-CAP Programme covered three sub-programmes namely Place and Train, Entrepreneurship and Gig Economy intended to address the challenges of graduates’ employability and unemployment.

Graduates Statistics 2021 presents the statistics of graduates within and outside the labour force as well as the salaries & wages of graduates in Malaysia. Various data sources were utilised in compiling the statistics namely the Labour Force Survey, Higher Education Statistics, Graduate Tracers Study and Salaries & Wages Survey. Graduates are defined as individuals aged 15 years and above with highest certificate obtained from universities, colleges, polytechnics, recognised bodies or equivalent, in which the duration of study is at least two years. Graduates are classified into two categories of certification namely Diploma and Degree. 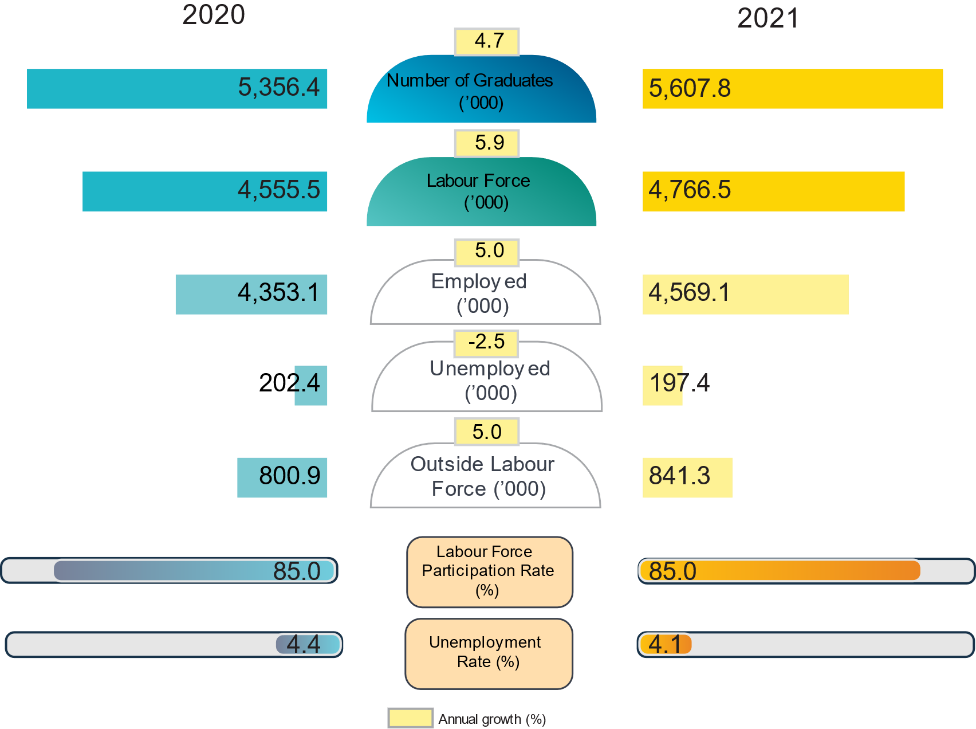 Analysis by occupation category, around two-third of employed graduates (64.8%) were in the skilled occupations category, accounting for 2.96 million persons. The highest share of 41.1 per cent (1.88 million persons) were employed in Professional occupation, followed by Technicians and associate professionals with 16.6 per cent (758.2 thousand persons). On the contrary, another 35.2 per cent of graduates worked in semi-skilled and low-skilled occupation categories. These groups could be identified as occupation mismatch considering their educations, knowledge and skills could not be fully utilised to their current work. Employed graduates in semi-skilled category which accounted for 32.9 per cent (1.50 million persons) were largely employed as Clerical support workers (14.4%), followed by Service and sales workers (10.8%) and Craft and related trades workers (4.2%). The remaining of 2.3 per cent (106.0 thousand persons) were employed in low-skilled category.

The compositions of male and female unemployed graduates across age groups were similar whereby approximately half was concentrated in the age group of 25 to 34 years, followed by about one-third in the age group of 24 years and below which can be associated with new entrants into the labour market 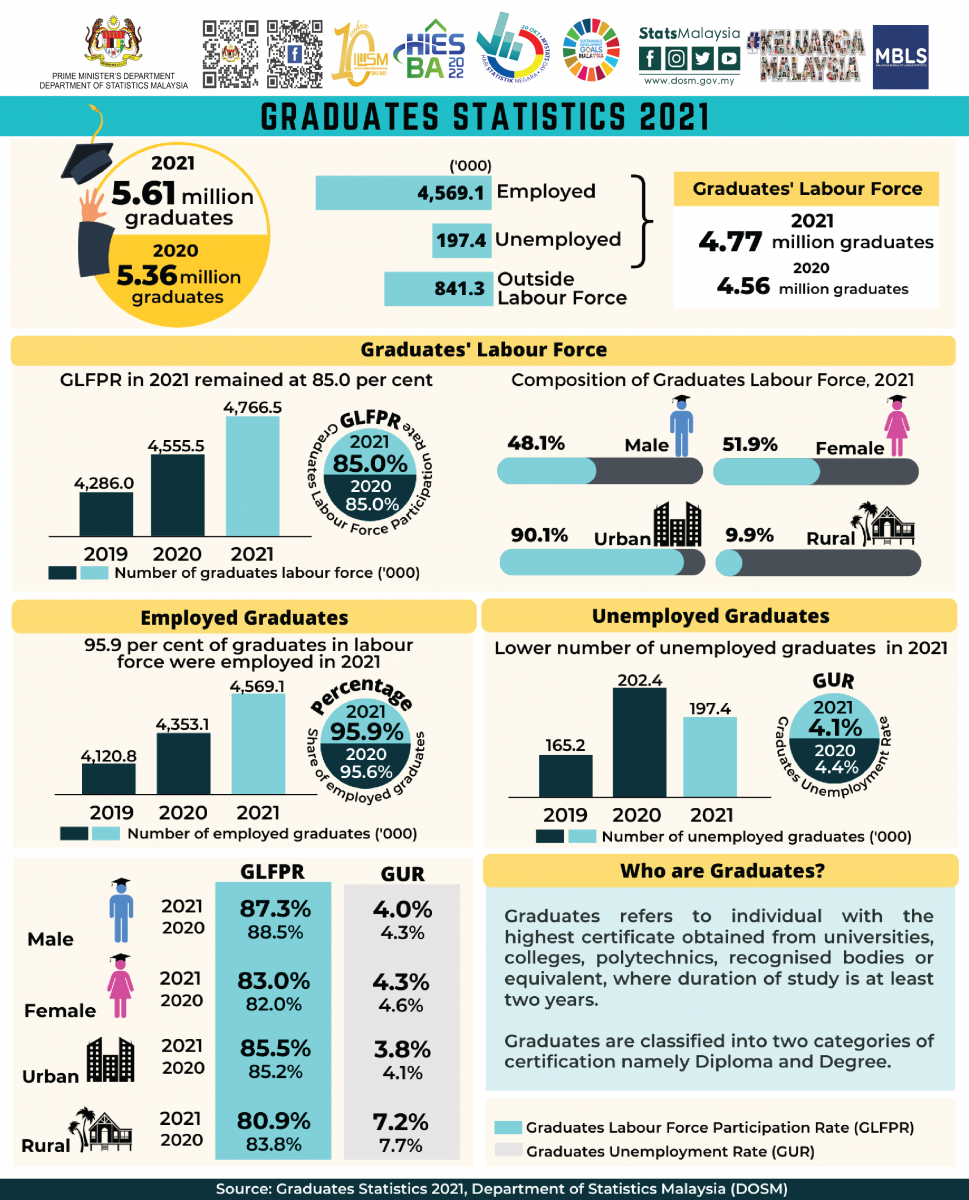 The detailed information and technical notes are published in the publication of Graduates Statistics, 2021. This publication is accessible and downloadable free of charge through the eStatistik application in DOSM web page, www.dosm.gov.my.