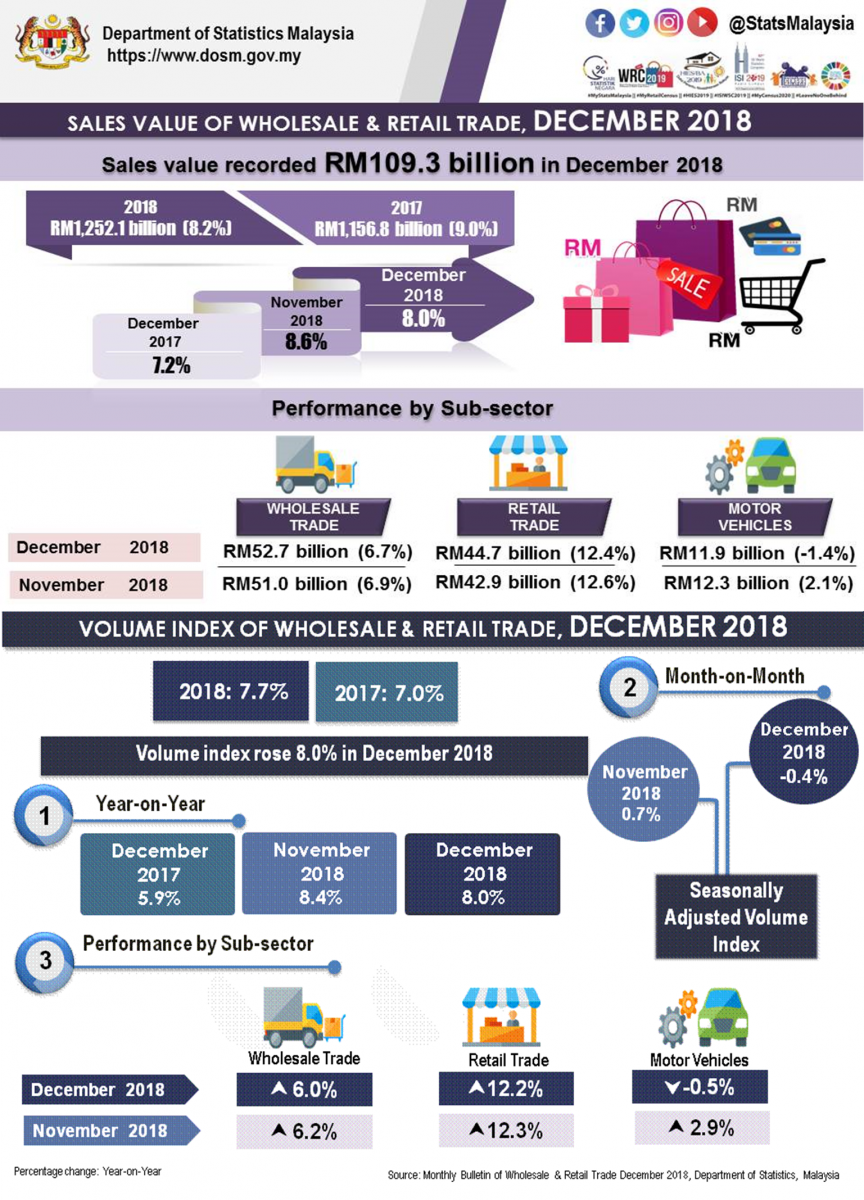 SALES OF WHOLESALE AND RETAIL TRADE SUB-SECTOR AMOUNTED TO RM109 BILLION,
STRENGTHENED AT 8.0 PER CENT

Volume index of Wholesale & Retail Trade rose  8.0 per cent to 175.7 points as against the same month a year ago. The increase was mainly driven by  Retail Trade (12.2%).  Meanwhile,  seasonally  adjusted  volume  index  decreased  0.4 per cent  over  the preceding month. For annual comparison, the volume index strengthened  7.7 per cent to  168.9 points compared to 2017.

Sales of Wholesale Trade registered a  year-on-year growth of  6.7 per cent to RM52.7 billion. The  increase  was  supported  by Other Specialised Wholesale, Wholesale of Food, Beverages & Tobacco and Wholesale on a Fee or Contract Basis which grew  9.0 per cent, 8.0 per cent and 7.6 per cent respectively. For monthly basis, sales of this sub-sector increased  3.3 per cent. Volume index of Wholesale Trade grew  6.0 per cent to 180.7 points in December 2018 as compared to the same month of the preceding year.

For the reference month, sales of Retail Trade sustained its double-digit growth to record  12.4 per cent as compared to the same period of the previous year. The expansion was propelled by Retail Sale in Non-Specialised Stores (15.9%) and Retail Sale of Other Goods in  Specialised Stores (14.8%). In  terms of volume index, Retail  Trade also recorded  a  double-digit  growth  of  12.2 per cent to  190.1 points in December 2018. As for seasonally adjusted index, it increased  0.2 per cent.

For this month, sales value of Motor Vehicles amounted to RM11.9 billion, decreased  1.4 per cent as against December 2017. This  was  attributed  by  Sales  of  Motor  Vehicles which  recorded  a  negative growth of  5.1 per cent. Month-on-month,  sales  value also contracted  3.2 per cent. Volume index of Motor Vehicles declined  0.5 per cent to  125.1 points compared to a year ago. For  month-on-month  comparison,  seasonally  adjusted  volume  index  of  this  sub-sector  decreased  4.7 per cent.

The details report are as shown in Bulletin of Wholesale & Retail Trade and Table.

Data for December 2018 is provisional. The data will be updated based on the latest available figures and subsequently published in the bulletin of January 2019.