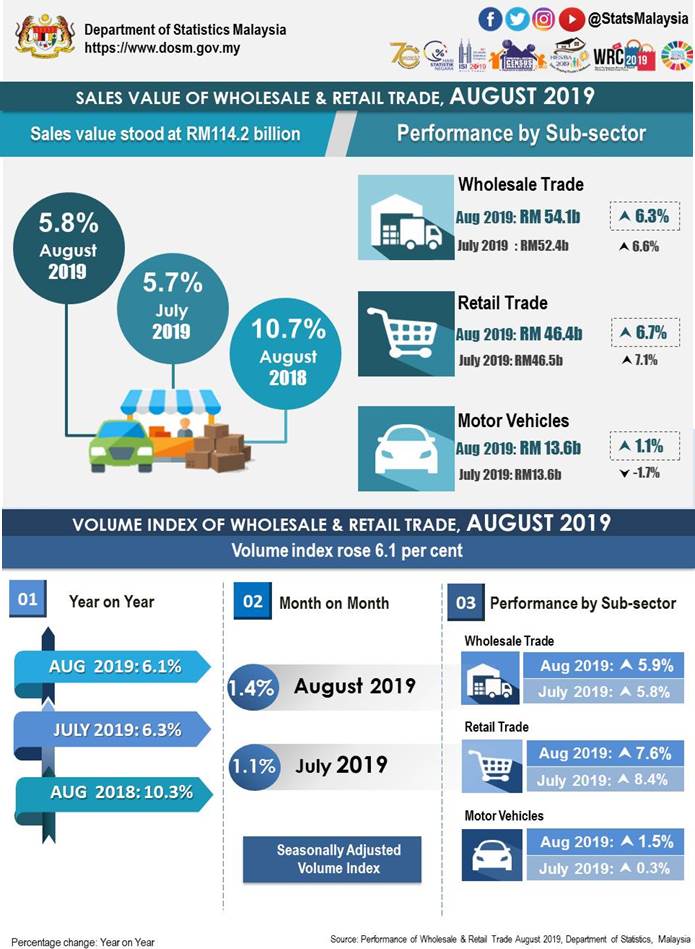 Volume index of Wholesale & Retail Trade posted a growth of  6.1 per cent to reach  133.5 points as compared to the same month of the previous year. The key contributor for this growth was Retail Trade with  7.6 per cent. As for seasonally adjusted volume index, it increased  1.4 per cent as against a month ago.

For performance across sub-sector, Retail Trade sub-sector led the other sub-sectors with year on year growth of  6.7 per cent. Within the same period, Wholesale Trade expanded  6.3 per cent. Likewise, Motor Vehicles were up  1.1 per cent.

The growth of  6.1 per cent in the volume index of Wholesale & Retail Trade was lifted by Retail Trade (7.6%) and followed by Wholesale Trade (5.9%). Motor Vehicles climbed up to  1.5 per cent within the same period.

Volume index of Wholesale Trade expanded  5.9 per cent to  132.5 points in August 2019 as compared to the same month of the preceding year. Wholesale of Agricultural Raw Materials & Live Animals recorded the highest growth of  9.4 per cent. This was followed by Wholesale of Food, Beverages & Tobacco  (7.3%) and  Other Specialised Wholesale (7.1%).  Seasonally  adjusted volume index of this sub-sector rose  1.5 per cent as against a month ago.

In terms of volume index, Retail Trade rose  7.6 per cent to  142.6 points in August 2019. Retail Sale in Non-Specialised Stores posted a growth of  9.3 per cent. This  was  followed  by  Retail  Sale  of  Food,  Beverages  & Tobacco in Specialised Stores and  Retail  Sale  of  Automotive  Fuel  in   Specialised   Stores  which  registered   8.4 per cent respectively. As for seasonally adjusted volume index, it edged up  0.6 per cent as against July 2019.

As for volume index, it increased  1.5 per cent to  111.4 points compared to a year ago. The marginal increment was off set by Sales of Motor Vehicles which declined to  1.0 per cent in August 2019. For monthly comparison, seasonally adjusted volume index decreased 1.5 per cent.

The details report are as shown in Performance of Wholesale & Retail Trade and Table.

Data for August 2019 is provisional. The data will be updated based on the latest available figures and subsequently published in the performance of September 2019.