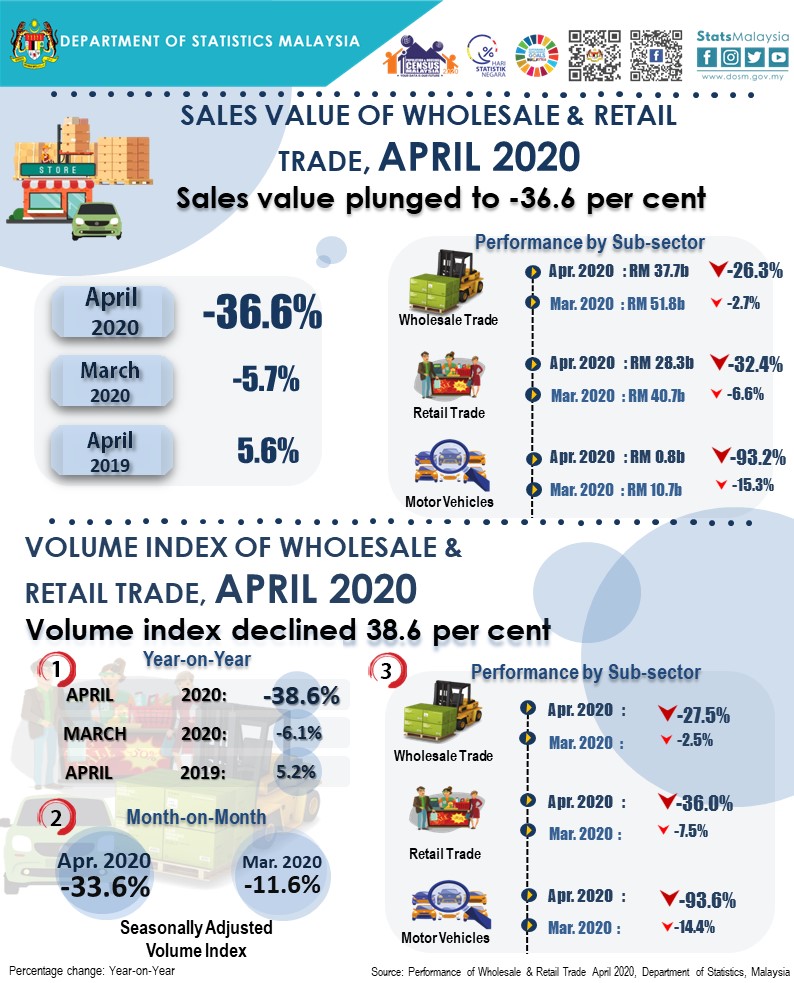 For performance across sub-sector, in April 2020, sales of Motor Vehicles declined  93.2 per cent as compared with the same period of the previous year.  Retail Trade and Wholesale Trade also declined to register  -32.4 per cent and   -26.3 per cent respectively.

Wholesale  Trade  generated  sales  value  of  RM37.7 billion  in  April  2020, down  RM13.5 billion  (-27.2%)  as  against the corresponding month of the previous year. Non-specialised Wholesale Trade and  Other Specialised Wholesaleas recorded the biggest fall of  45.2 per cent and  39.4 per cent as against April 2019. For monthly comparison, sales of this sub-sector also registered a negative growth of  27.2 per cent.

Volume index of Retail Trade went down  36.0 per cent to  82.6 points in April 2020 as against the same month of previous year. Inline with the sales value, the decline was depicted in Retail Sale of Automotive Fuel in Specialised Stores and sales related to non-essential product namely Retail Sale of Other Goods in Specialised Stores and Retail Sale of Cultural & Recreation Goods. As for seasonally adjusted volume index, it decreased to  -29.8 per cent as compared to March 2020.

The volume index registered  6.3 points, decreased  93.6 per cent compared to a year ago. All groups under Motor Vehicles recorded a negative double digit growth led by Sale of Motor Vehicles with  -93.9 per cent in April 2020. For monthly comparison, seasonally adjusted volume index slumped  26.1 per cent.

The full publication of the Performance of Wholesale & Retail Trade, April 2020 can be downloaded from eStatistik portal.

Data for April 2020 is provisional. The data will be updated based on the latest available figures and subsequently published in the performance of May 2020.