This report presents statistics on domestic tourism which covered Malaysian residents in urban and rural areas aged 15 years and above. The statistics presented are based on Domestic Tourism Survey conducted in 2015. 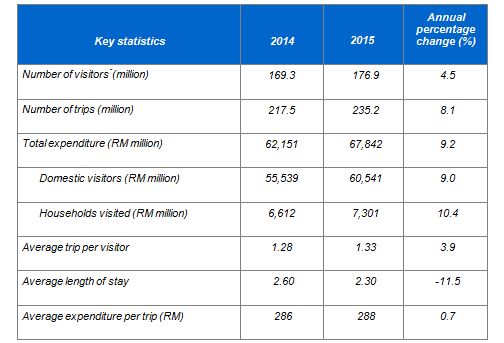 Note: * This number includes the same visitor who makes a trip or multiple trips in a year

A total of 176.9 million domestic visitors were registered in 2015 of which 114.2 million were excursionists, while the remaining 62.7 million were tourists.The number of excursionists and tourists increased by 5.2 per cent and 3.3 per cent respectively compared to the previous year (Chart 1).

The detailed information regarding this report can be accessed through the eStatistik application in the portal of Department of Statistics Malaysia.