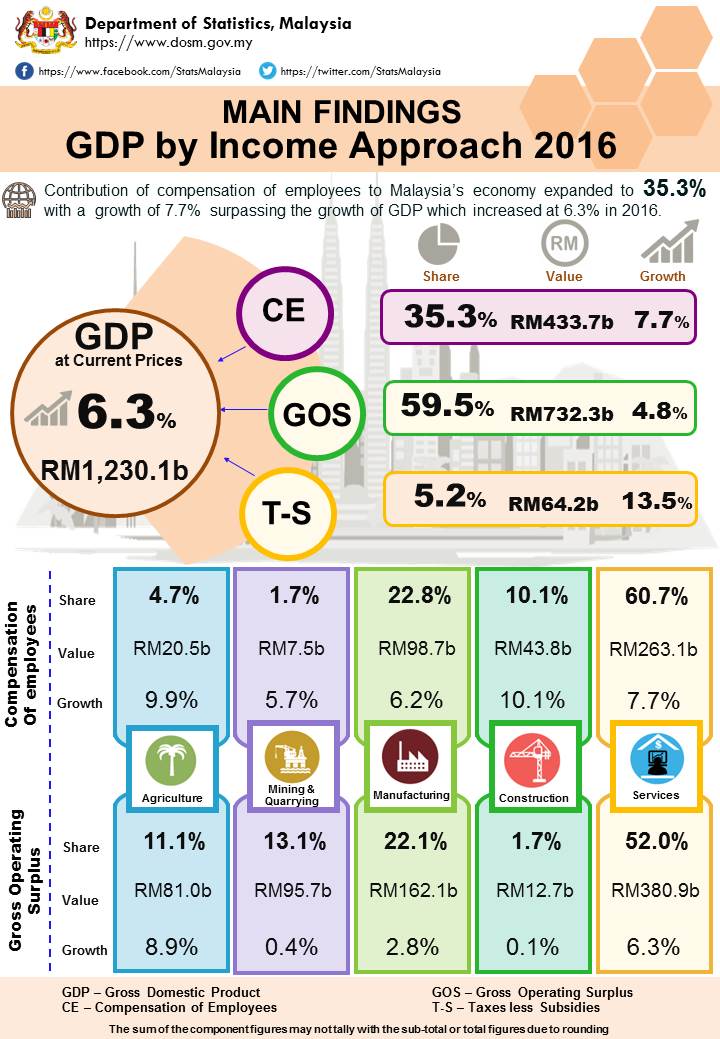 Malaysia’s economy increased in 2016 as the value of GDP at current prices expanded further to register RM1,230.1 billion and grew 6.3 per cent as depicted in Chart 1. The expansion in GDP was propelled by the higher performance of all income components spearheaded by Gross Operating Surplus (GOS) which recorded RM732.3 billion while Compensation of Employees (CE) has reached a value of RM433.7 billion. Taxes less Subsidies on Production and Imports stood at RM64.2 billion.

In 2016, GOS maintained its position as the largest income components with a share of 59.5 per cent and posted 4.8 per cent growth (2015: 0.6%) which was backed by Services, Agriculture and Manufacturing sectors. The share of CE to Malaysia’s economy expanded to 35.3 per cent and rose to 7.7 per cent (2015: 6.2%) which was largely led by Services and Manufacturing. Taxes less Subsidies on Production and Imports formed 5.2 per cent of overall income and registered a double-digit growth of 13.5 per cent (2015: 71.1%).

Services was the largest contributor to the total CE with a share of 60.7 per cent followed by Manufacturing which accounted for 22.8 per cent in 2016 as illustrated in Chart 2. Construction expanded to 10.1 per cent as compared to 9.9 per cent in the previous year. Moreover, Agriculture and Mining & Quarrying recorded a share of 4.7 per cent and 1.7 per cent respectively.

CE expanded to 7.7 per cent largely boosted by Services which strengthened to 7.7 per cent. The momentum of Other Services (including Government Services) which rose to 6.5 per cent has spearheaded the Services. The CE performance for Manufacturing recorded at 6.2 per cent was underpinned by Electrical, Electronic & Optical Products which registered a growth of 7.6 per cent.

Construction continued to record a double-digit growth for six consecutive years by registering 10.1 per cent in 2016. Agriculture rebounded to 9.9 per cent from negative 0.2 per cent last year due to turnaround in all segments. In addition, Mining & Quarrying elevated to 5.7 per cent as compared to 0.8 per cent in the previous year.

As the largest contributor to the economy, Services accounted for 52.0 per cent to total GOS in 2016 followed by Manufacturing at 22.1 per cent as shown in Chart 3. Mining & Quarrying and Agriculture contributed 13.1 per cent and 11.1 per cent respectively. Meanwhile, Construction recorded a contribution of 1.7 per cent.

As GOS forms the substantial share to GDP, the growth of this component was inline with the economic performance. In 2016, GOS augmented to 4.8 per cent as compared to 0.6 per cent registered in the preceding year. Services strengthened to 6.3 per cent propelled by Wholesale & Retail Trade, Food & Beverage and Accommodation. Agriculture rebounded to 8.9 per cent following a positive growth in all segments.

The momentum of GOS in Manufacturing increased 2.8 per cent supported mainly by Electrical, Electronic & Optical Products which grew at 9.1 per cent. In addition, Mining & Quarrying rebounded to 0.4 per cent while Construction posted a growth of 0.1 per cent supported by the performance of civil engineering and residential activities.