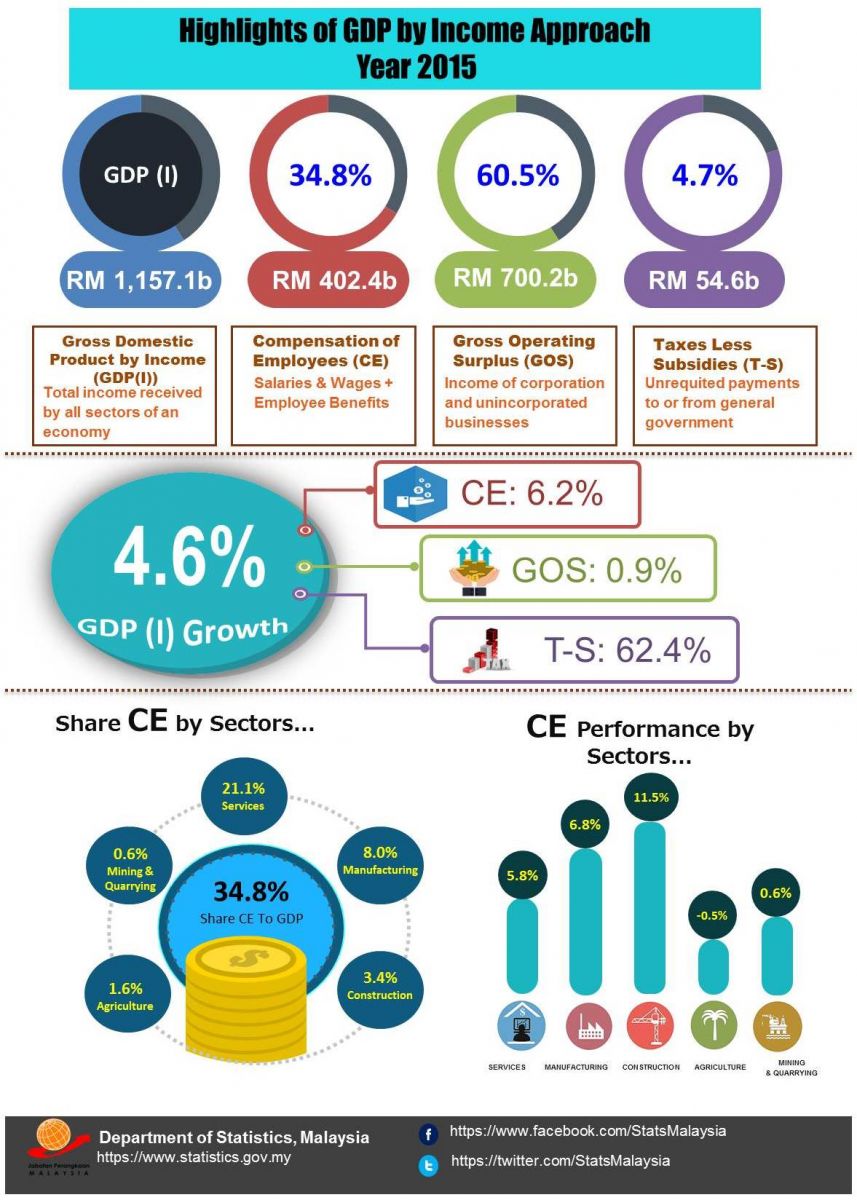 This publication presents the statistics of Gross Domestic Product (GDP) by Income Approach for the period of 2010 to 2015. The statistics are presented by kind of economic activity at current prices which covers income components namely Compensation of Employees (CE), Gross Operating Surplus (GOS) and Taxes less Subsidies on Production and Imports.

As depicted in Chart 1, GOS holds the largest share in income components at 60.5 per cent while Compensation of Employees contributed 34.8 per cent to the Malaysia’s economy. The remaining 4.7 per cent was contributed by Taxes less Subsidies on Production and Imports.

The overall economy recorded a growth of 4.6 per cent in 2015 supported by the positive performance in Services, Manufacturing and Construction sectors. Compensation of Employees grew 6.2 per cent as compared to 9.7 per cent in the previous year, while Gross Operating Surplus slower to 0.9 per cent (2014: 6.4%). Conversely, Taxes less Subsidies on Production and Imports escalated to 62.4 per cent contributed by the rationalisation of subsidy and implementation of Goods and Services Tax (GST) by the government in 2015.

As the prime mover of the economy, Services sector contributed the largest share to the total CE at 60.6 per cent while share of Manufacturing sector accounted for 23.1 per cent in 2015 (Chart 2). Following the labour intensive characteristic in Construction, this sector was the third largest contributor which expanded to 9.9 per cent from 9.4 per cent in the last year. Moreover, Agriculture and Mining & Quarrying hold 4.6 per cent and 1.8 per cent of share respectively.

Compensation of Employees recorded a growth of 6.2 per cent largely impelled by Services and Manufacturing sectors. Compensation of Employees for Services sector grew at 5.8 per cent propelled by the sturdy growth of Wholesale & Retail Trade, Food & Beverage and Accommodation at 10.4 per cent. Manufacturing sector posted a growth of 6.8 per cent supported by the robust momentum of Electrical, Electronic & Optical products at 12.3 per cent.

For year 2015, GOS was led by Services with a share of 51.3 per cent followed by Manufacturing at 22.5 per cent as shown in Chart 3. Mining & Quarrying and Agriculture sectors contributed 13.6 per cent and 10.8 per cent respectively. Meanwhile, Construction accounted for 1.8 per cent to the total GOS.

Gross Operating Surplus posted a growth of 0.9 per cent after recording a growth of 6.4 per cent in the previous year. Services registered a growth of 3.9 per cent bolstered by the strong momentum in Wholesale & Retail Trade, Food & Beverage and Accommodation (7.0%). Manufacturing recorded a marginal growth of 0.1 per cent supported by the double-digit growth in Electrical, Electronic & Optical products at 11.6 per cent.

Construction posted a growth of 0.3 per cent supported by residential and non-residential buildings activities performance. Nevertheless, Agriculture contracted 1.7 per cent while Mining & Quarrying recorded a negative growth of 5.9 per cent (2014: 4.9%).