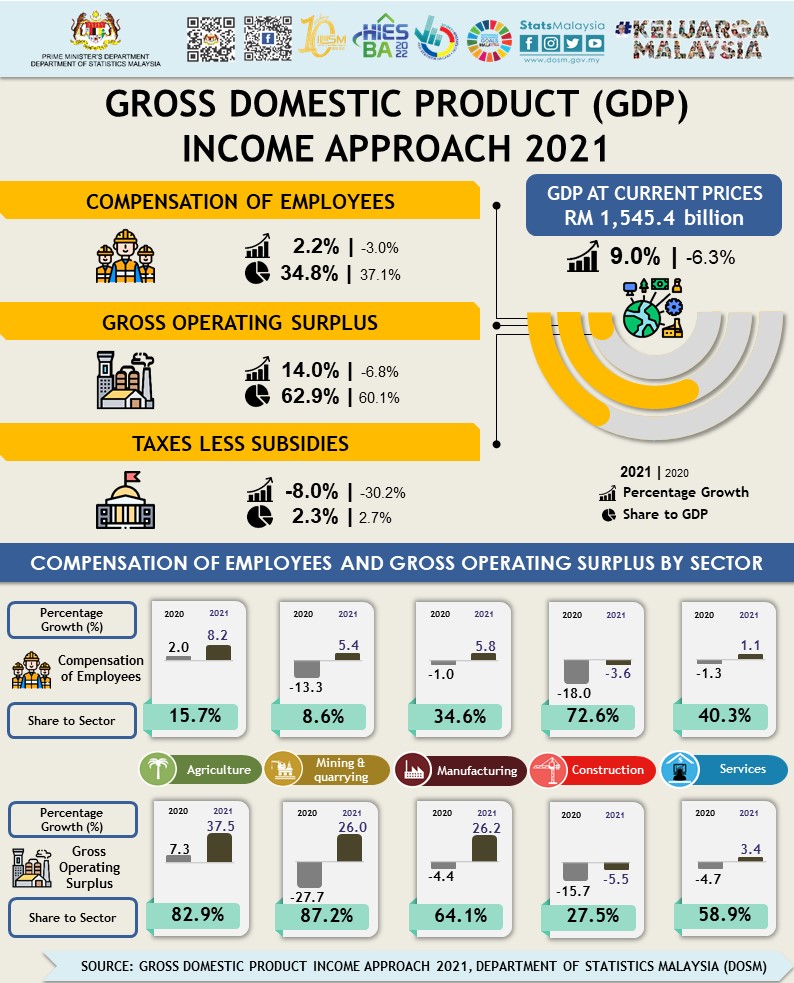 Malaysia’s economy has gradually recovered in 2021 despite the reimposition of the Movement Control Order (MCO) during the second quarter to curb the spread of the new COVID-19 variant. During the year, more businesses were allowed to operate with strict standard operating procedures, which has led to the uptick in the economy.

Furthermore, higher commodity prices, mainly crude oil and fresh fruit bunches, have partly contributed to the performance of Malaysia’s GDP in current terms, whereby GDP rebounded to 9.0 per cent as compared to a decrease of 6.3 per cent in 2020. Therefore, GDP was above 2.2 per cent from the pre-pandemic in 2019. Out of the three income components, GOS has outperformed CE and Net taxes with a double-digit growth of 14.0 per cent (2020: -6.8%) attributed to the elevated commodity prices and better production. The GOS was above the pre-pandemic in 2019 with 6.3 per cent. Likewise, the share of GOS to GDP has increased to 62.9 per cent (RM971.7 billion), which was the largest share recorded since 2015.

Meanwhile, CE grew 2.2 per cent as compared to a decline of 3.0 per cent in the previous year. Nevertheless, CE contracted marginally 0.9 per cent compared to the pre-pandemic in 2019. In terms of share to GDP, the CE contributed 34.8 per cent which amounted to RM537.9 billion. Nonetheless, Net taxes remained decline 8.0 per cent as against a negative 30.2 per cent in the previous year. The moderate contraction was attributed to the higher Taxes on production and imports, which rebounded to 5.8 per cent (2020: -7.0%). Meanwhile, Subsidies expanded by 28.7 per cent (2020: 108.2%) following the various economic stimulus packages announced by the Government to boost the domestic economy. Net taxes formed 2.3 per cent (RM35.7 billion) to the GDP in 2021, as illustrated in Chart 1.

CE includes remuneration, in cash or in kind, payable by an enterprise to an employee in return for work done during the accounting period. Following the economic recovery in 2021, CE has turnaround to record a positive growth of 2.2 per cent from a decrease of 3.0 per cent in the previous year.

Almost all economic sectors showed positive growth in CE except for the Construction sector in 2021. The CE in the Services sector grew 1.1 per cent from a decline of 1.3 per cent in the preceding year, which was attributed to Transportation & storage and information & communication sub-sector with a growth of 2.3 per cent (2020: -7.1%). Meanwhile, Wholesale & retail trade, food & beverage and accommodation sub-sector increased marginally by 0.1 per cent (2020: -1.7%)  in 2021. Furthermore, Other services (including government services) sub-sector recorded a growth of 2.5 per cent against 1.7 per cent in the previous year.

CE in the Manufacturing sector increased 5.8 per cent, compared to a 1.0 per cent decrease in 2020. The growth was mainly supported by Electrical, electronic & optical products at 7.9 per cent (2020: -0.2%). Furthermore, Petroleum, chemical, rubber & plastic products and Non-metallic mineral products, basic metal & fabricated metal products also contributed to the momentum in this sector by registering a growth of 7.6 per cent and 4.4 per cent, respectively.

GOS formed a substantial share to GDP and the growth of this component was in line with the economic performance. Thus, GOS surged to 14.0 per cent surpassing the economic growth of 9.0 per cent, supported by the expansion in all sectors. In 2021, the Manufacturing, Agriculture and Mining & quarrying sectors recorded a double-digit growth of GOS.

GOS of the Manufacturing sector strengthened to 26.2 per cent, from a decrease of 4.4 per cent in the previous year. The growth was propelled by Petroleum, chemical, rubber and plastic products with double-digit growth of 44.3 per cent (2020: -10.9%). Meanwhile, Electrical, electronic and optical products remained its double-digit growth of 15.2 per cent (2020: 13.6%). Furthermore, Food, beverages & tobacco expanded to 17.5 per cent against 11.0 per cent in 2020.

Momentum of GOS in Agriculture sector stepped up to 37.5 per cent from 7.3 per cent in the previous year, spearheaded by Rubber, oil palm, livestock and other agriculture sub-sector which further expanded to 44.9 per cent (2020: 14.0%) in 2021. Mining & quarrying sector recorded a sturdy growth at 26.0 per cent (2020: -27.7%) owing to higher petroleum prices in 2021. However, Construction sector recorded a slower declined of 5.5 per cent as compared to negative 15.7 per cent in the preceding year (Chart 5). 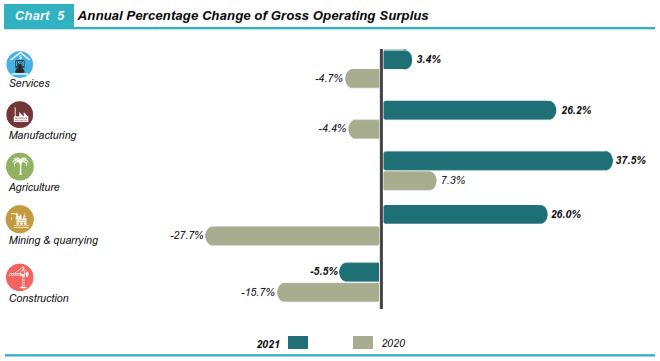 The full publication of Gross Domestic Product Income Approach 2021 can be downloaded through  eStatistik portal.