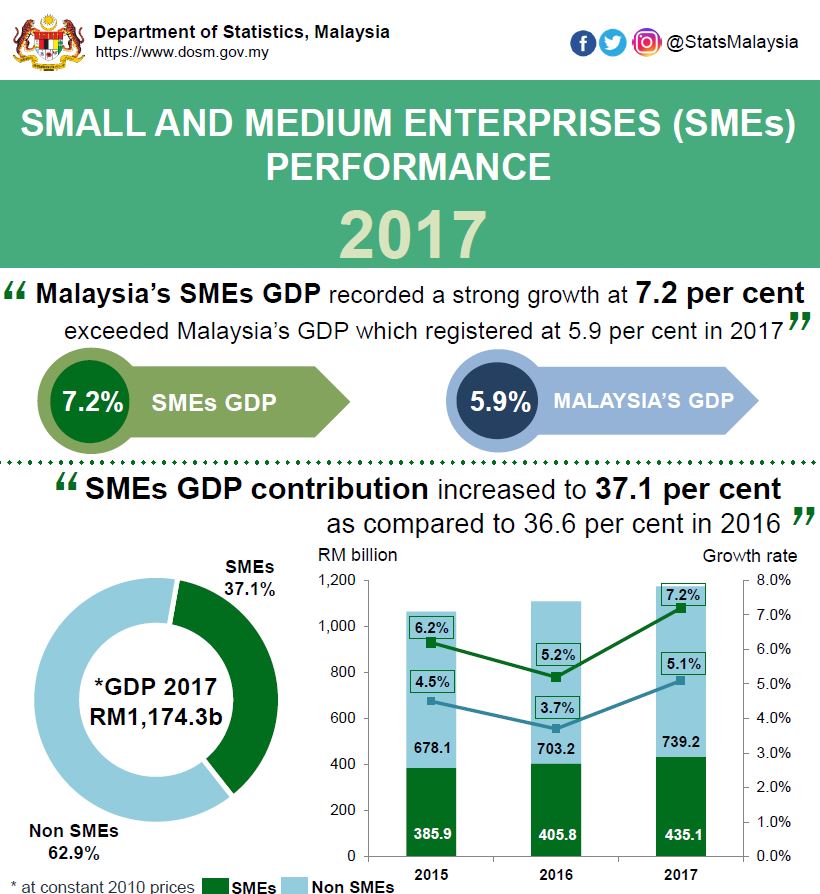 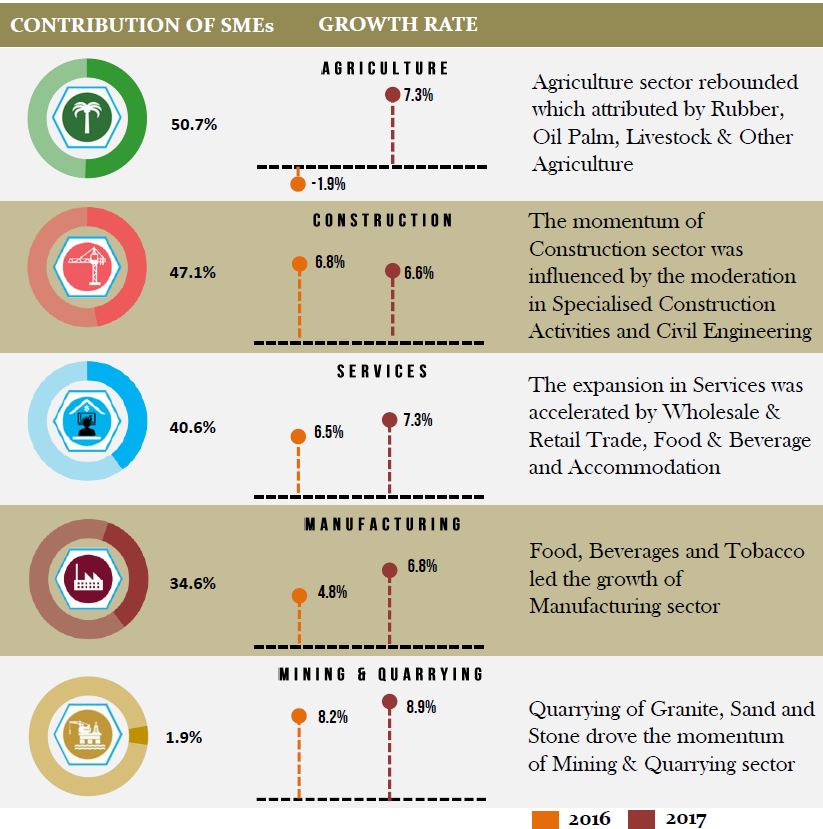 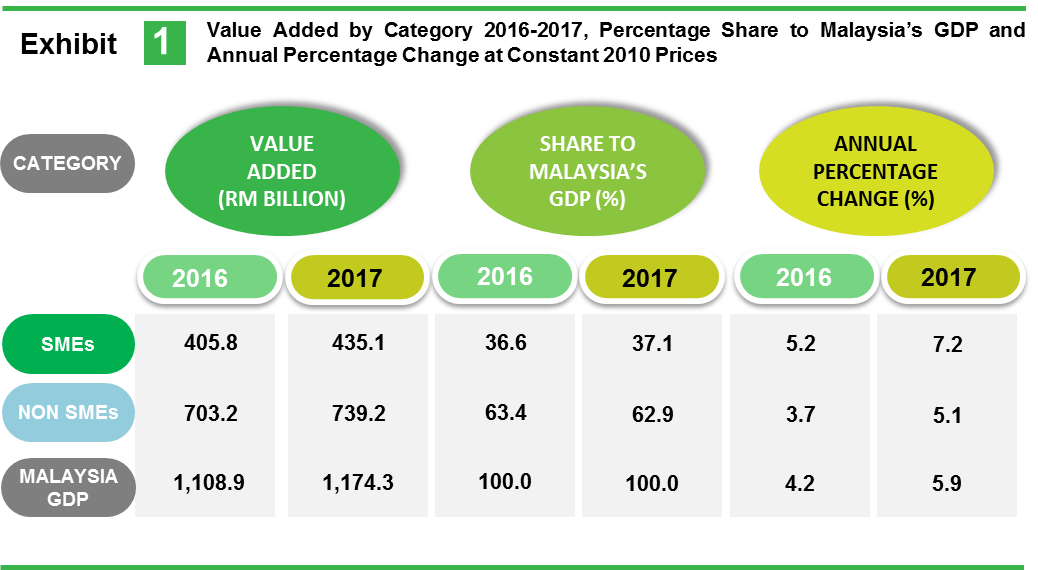 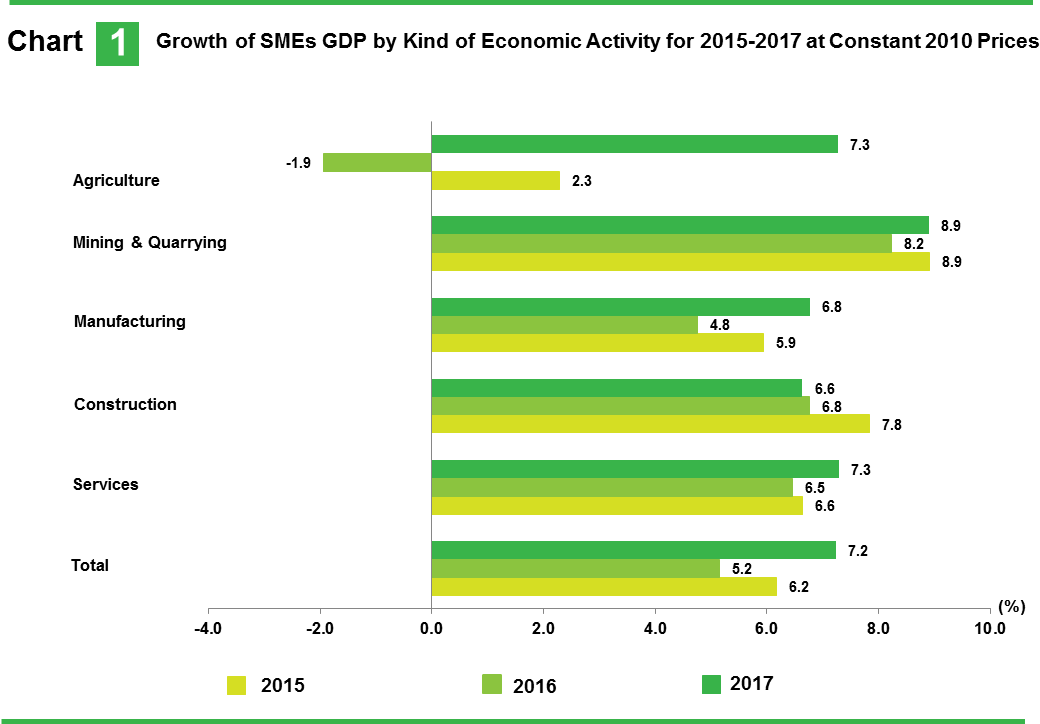 SMEs value added for Services sector registered a growth of 7.3 per cent as compared to 6.5 per cent in 2016 as shown in  Chart 1. The growth momentum was accelerated by Wholesale & retail trade, food & beverage and accommodation subsector which grew to 7.5 per cent (2016: 6.8%) attributed by retail and motor vehicle segments. Moreover, the growth of Finance, insurance, real estate and business services subsector increased at 7.4 per cent (2016: 5.9%) and Transportation & storage and information & communication subsector which expanded to 6.8 per cent (2016: 5.9%) has supported the growth momentum.

The value added of SMEs Agriculture sector rebounded to 7.3 per cent from a negative 1.9 per cent in the previous year. This was attributed by Rubber, oil palm, livestock & other agriculture subsector which expanded to 10.3 per cent (2016: -2.6%) following an increase in production of rubber and oil palm.

SMEs in Construction sector recorded a slower growth of 6.6 per cent (2016: 6.8%) with a value added of RM25.3 billion in 2017. This was due to the moderation in Specialised construction activities and Civil engineering. In addition, slower growth in Residential buildings has pulled down the overall performance of this sector. Meanwhile, value added of SMEs in Mining & quarrying sector grew 8.9 per cent from 8.2 per cent in 2016.

COMPOSITION BY KIND OF ECONOMIC ACTIVITY 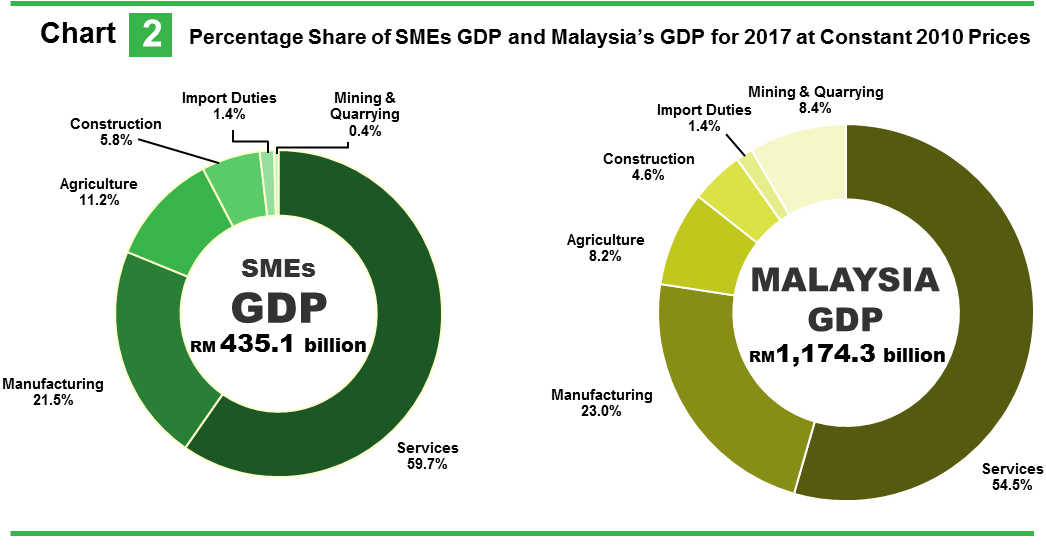 CONTRIBUTION OF SMEs GDP BY KIND OF ECONOMIC ACTIVITY

From the perspective of SMEs GDP contribution by kind of economic activity, all sectors recorded a higher contribution in 2017 except for Construction sector. SMEs GDP led by the Agriculture sector with a share of 50.7 per cent sustained from 2016 as portrayed in Chart 3. This contribution was impelled by Rubber, oil palm, livestock and other agriculture subsector.

The contribution of SMEs GDP in Construction sector posted 47.1 per cent from 47.2 per cent in the preceding year. This was reflected by the lower contribution in Civil engineering activities.

SMEs GDP of Services sector expanded to 40.6 per cent as compared to 40.2 per cent in 2016 which was dominated by Wholesale & retail trade, food & beverage and accommodation subsector. Subsequently, Finance, insurance, real estate and business services subsector has also supported the Services sector. 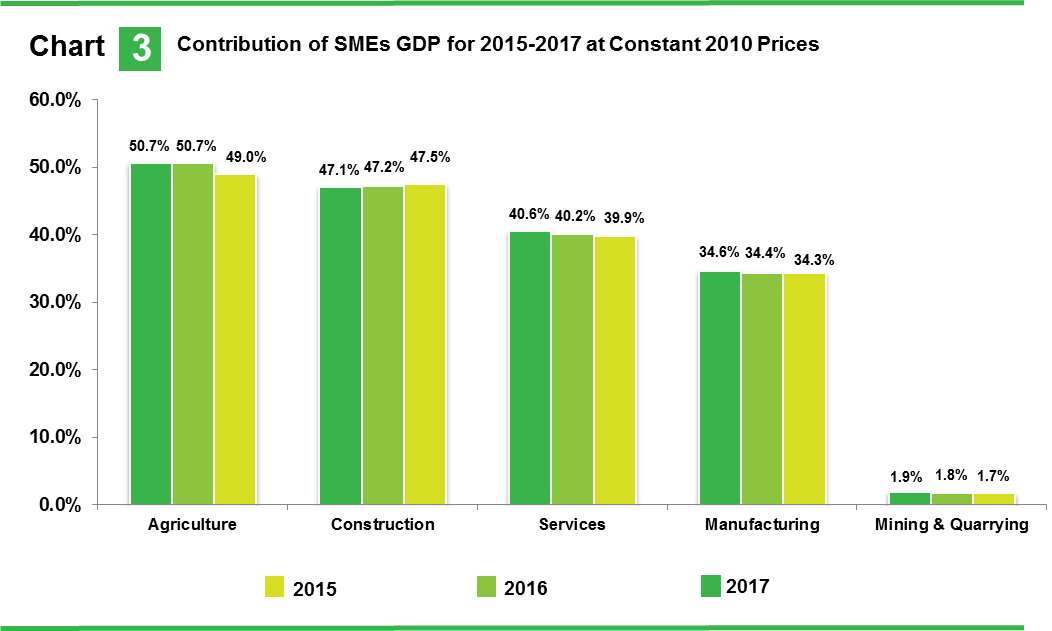 SMEs GDP in Manufacturing sector recorded a marginal increase to 34.6 per cent (2016: 34.4%) attributed by Food, beverages and tobacco products. In addition, Non-metallic mineral products, basic metal & fabricated metal products also contributed towards the increment of SMEs GDP contribution in this sector. Meanwhile, the SMEs GDP in Mining & quarrying sector recorded a share of 1.9 per cent (2016: 1.8%) mainly in quarrying of granite, sand and stone. 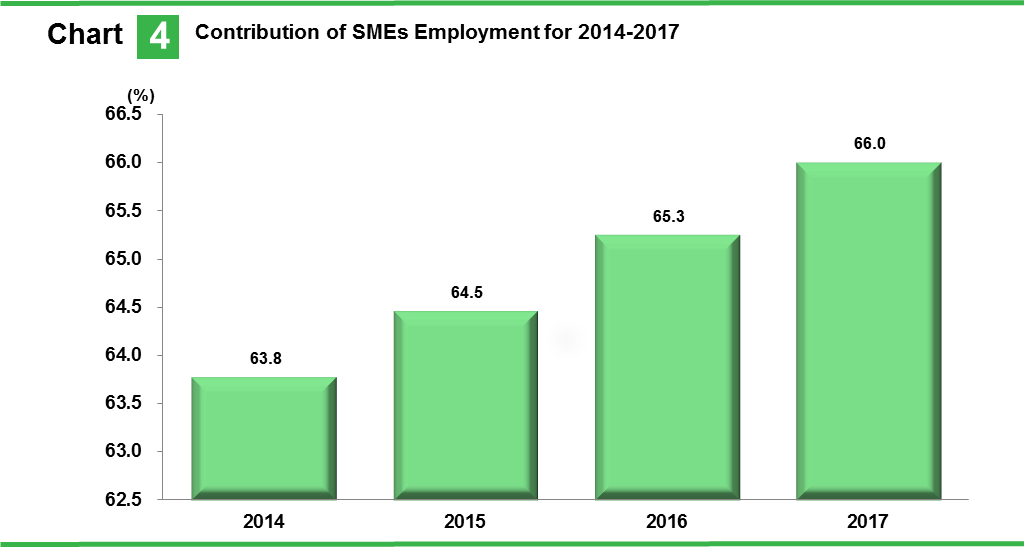 Statistics on SMEs are important in measuring the performance of small and medium scale firms for assisting the government in future developments on SMEs. Furthermore, these statistics are relevant since SMEs formed as the backbone in supporting the overall economy.