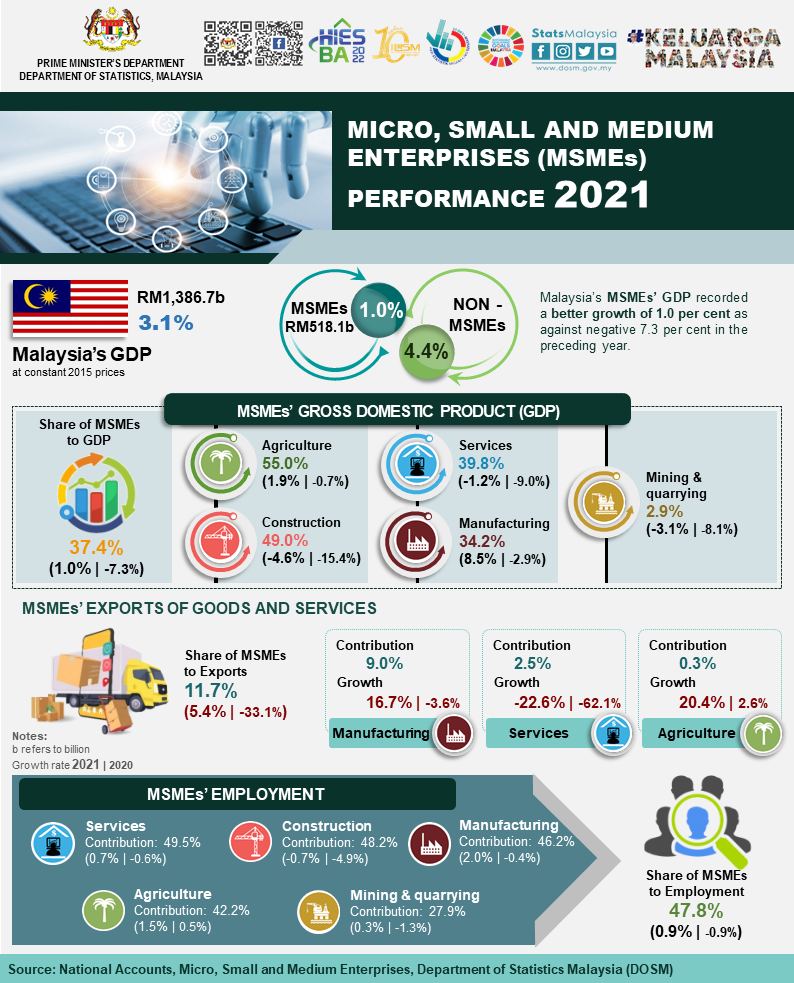 Malaysia’s economy regained its momentum in 2021, where the country has transitioned to Phase 4 of the National Recovery Plan (NRP) and inter-state travel restrictions were lifted. The gradual recovery will enable entrepreneurs to pick up business momentum, thus fueling Malaysia's economic recovery. Nevertheless, Malaysia’s economic performance in 2021 is still lower than pre-pandemic levels in 2019. Subsequently, the share of Micro, Small & Medium Enterprises (MSMEs) in terms of Gross Domestic Product (GDP), Exports, and Employment remained to decline in 2021. 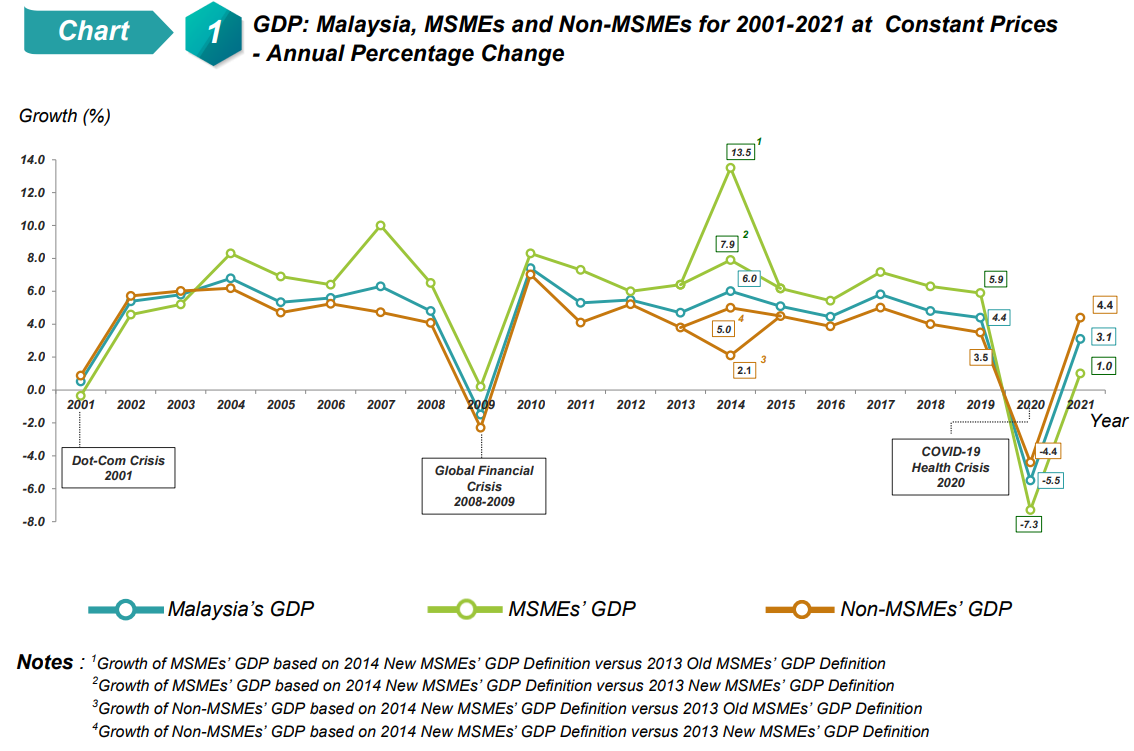 The contribution of MSMEs to GDP declined to 37.4 per cent in 2021 with a value added of RM518.1 billion as compared to 38.1 per cent (value added: RM512.9 billion) in the previous year as presented in Chart 2. The Services and Manufacturing sectors uphold its position as the main contributors of MSMEs’ GDP activities, which both sectors represent more than 80.0 per cent of MSMEs’ GDP. Furthermore, MSMEs’ GDP registered RM572.6 billion in nominal terms this year (2020: RM547.3 billion). 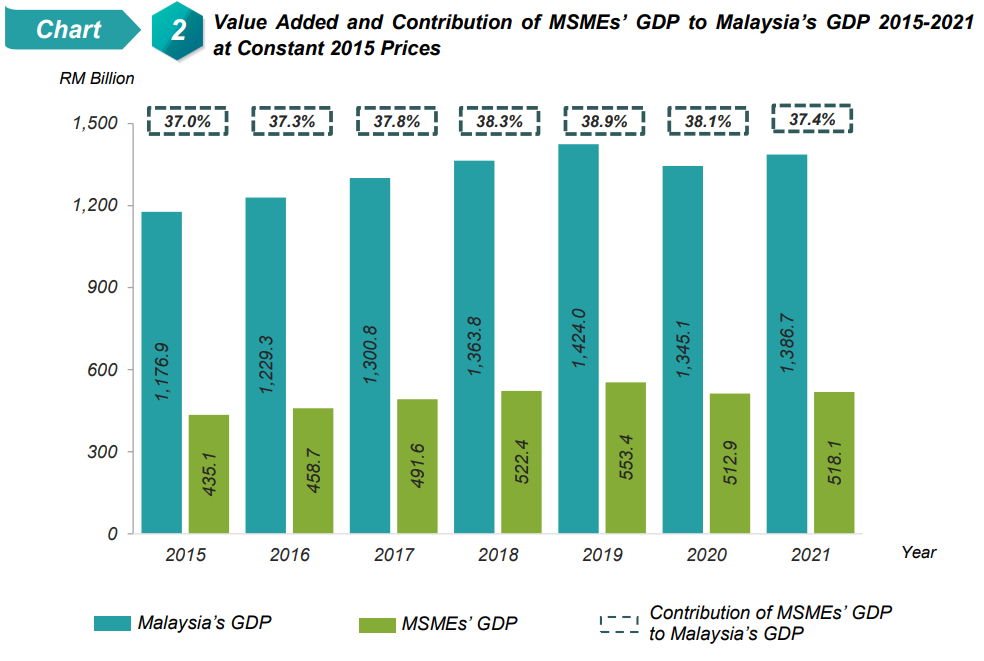 MSMEs’ value added for the  Manufacturing sector rebounded to 8.5 per cent from a decrease of 2.9 per cent in the preceding year as shown in  Exhibit 1. This favourable performance was driven by a positive growth in all sub-sectors, which was reflected in a strong growth particularly in Petroleum, chemical, rubber and plastic products, which surged by 14.4 per cent (2020: 3.2%). Meanwhile, the Food, beverages and tobacco also strengthened to 4.6 per cent as compared to the previous year (2020: 1.9%).

Likewise, the value added of MSMEs in Agriculture sector expanded to 1.9 per cent from negative 0.7 per cent in the preceding year. The performance was supported by the Rubber, oil palm, livestock and other agriculture sub-sector which flourished to 2.5 per cent in 2021 (2020: 1.0%). On the other hand, the Fishing sub-sector continued to record negative growth this year.

Nevertheless, value added of MSMEs in the Mining & quarrying sector contracted 3.1 per cent (2020: -8.1%) while the Construction sector narrowed 4.6 per cent from negative 15.4 per cent in the previous year.

Moreover, MSMEs in the Services sector recorded a smaller decrease of 1.2 per cent as against to negative 9.0 per cent in the preceding year. The decline was influenced by the 5.8 per cent drop in the Finance, insurance, real estate and business services sub-sector (2020: -10.3%) and offset by performance in Wholesale & retail trade, food & beverages and accommodation sub-sector which rebounded to 0.5 per cent (2020: -7.7%). Besides that, Transportation & storage and information & communication sub-sector registered an expansion of 2.9 per cent (2020: -11.2%).

DISTRIBUTION BY KIND OF ECONOMIC ACTIVITY

The Services sector continued to be the main contributor in MSMEs’ activities, which constituted 60.8 per cent, followed by the Manufacturing sector with 22.3 per cent (Exhibit 2). The Agriculture sector contributed 10.5 per cent to MSMEs’ GDP. In the meantime, the Construction and Mining & quarrying sectors contributed 4.8 per cent and 0.5 per cent, respectively. 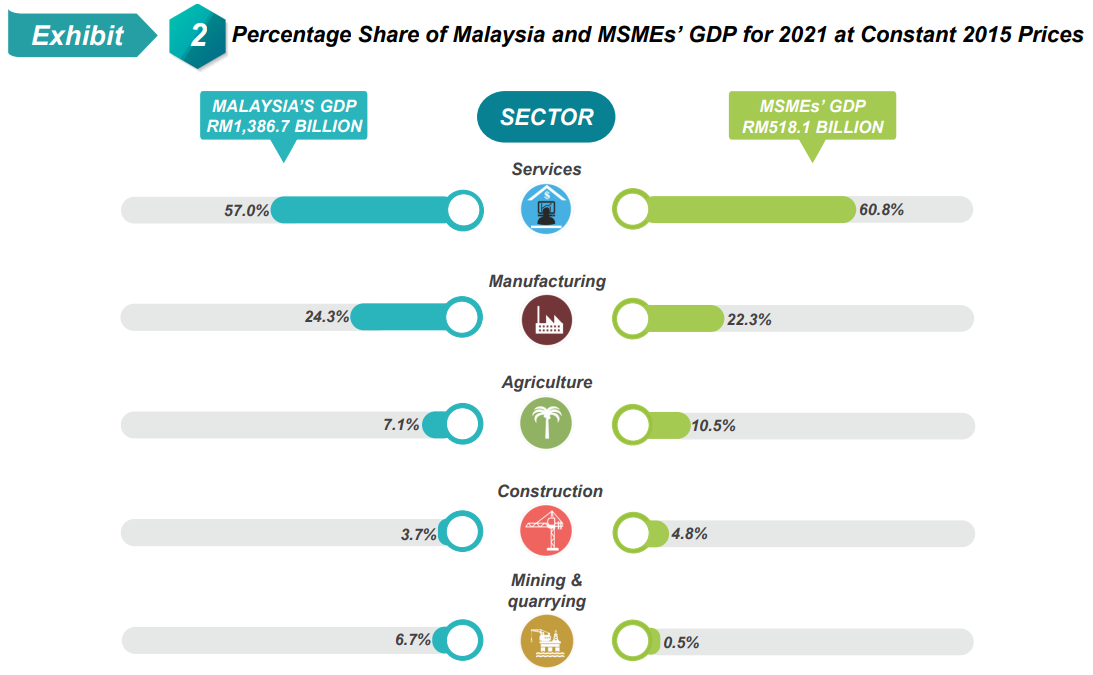 CONTRIBUTION BY KIND OF ECONOMIC ACTIVITY

In terms of MSMEs’ GDP contribution by kind of economic activity, the Services, Manufacturing and Mining & quarrying sectors recorded a decline in 2021. However, this performance was partially offset by the expansion in the share of the Agriculture and Construction sectors. MSMEs’ GDP was led by the Agriculture sector with a share of 55.0 per cent (2020: 53.9%), attributed to Rubber, oil palm, livestock and other agriculture sub-sector as portrayed in Exhibit 3. The MSMEs’ GDP share for the Construction sector rose to 49.0 per cent as compared to 48.7 per cent in 2020. 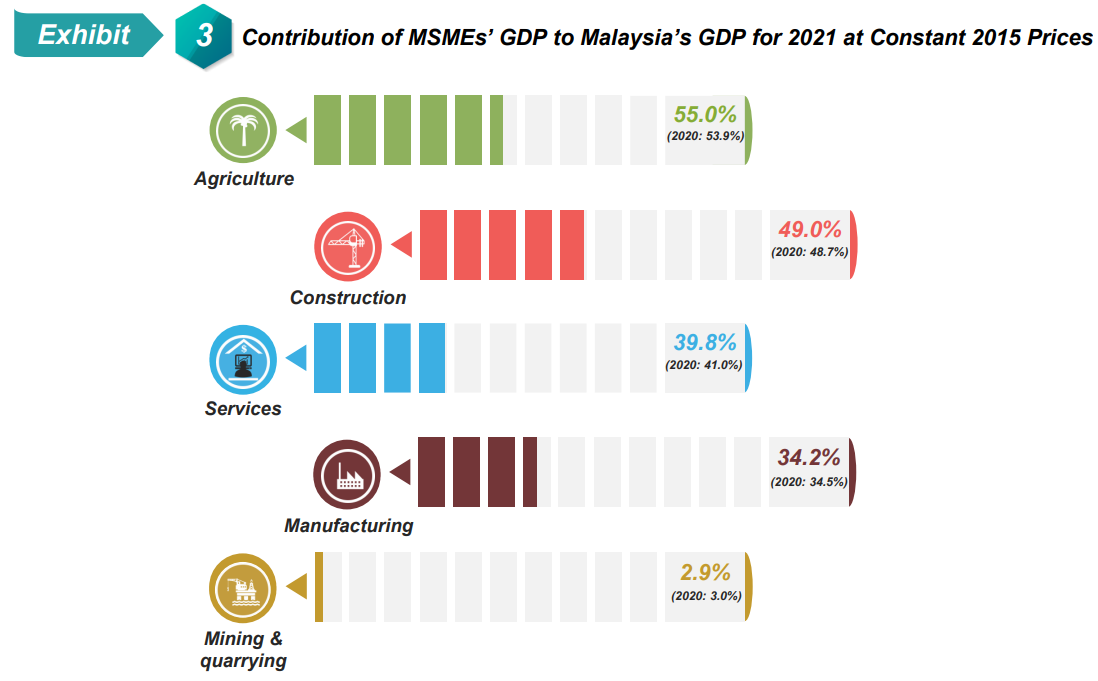 MSMEs’ GDP share of the Services sector fell to 39.8 per cent from 41.0 per cent in the preceding year. The sector was dominated by Wholesale & retail trade, food & beverage and accommodation sub-sector. In addition, the Manufacturing sector registered a share of 34.2 per cent (2020: 34.5%) to MSMEs’ GDP supported by Petroleum, chemical, rubber and plastic products. Meanwhile, MSMEs’ GDP in the Mining & quarrying sector recorded a share of 2.9 per cent (2020: 3.0%), slightly lower than in the previous year.

Exports of MSMEs valued at RM124.3 billion in 2021, consequently recorded an increase of 5.4 per cent as compared to a decline of 33.1 per cent in 2020, driven by Manufacturing (16.7%) and Agriculture sector (20.4%) as in Chart 3. Manufacturing sector dominated overall MSMEs’ exports with a contribution of 76.6 per cent in 2021, stimulated by miscellaneous manufactured articles, manufactured goods and chemicals. The major destination for MSMEs’ exports for Manufacturing sector was Singapore, which constituted 18.8 per cent, followed by China (16.5%) and the United States (10.3%). 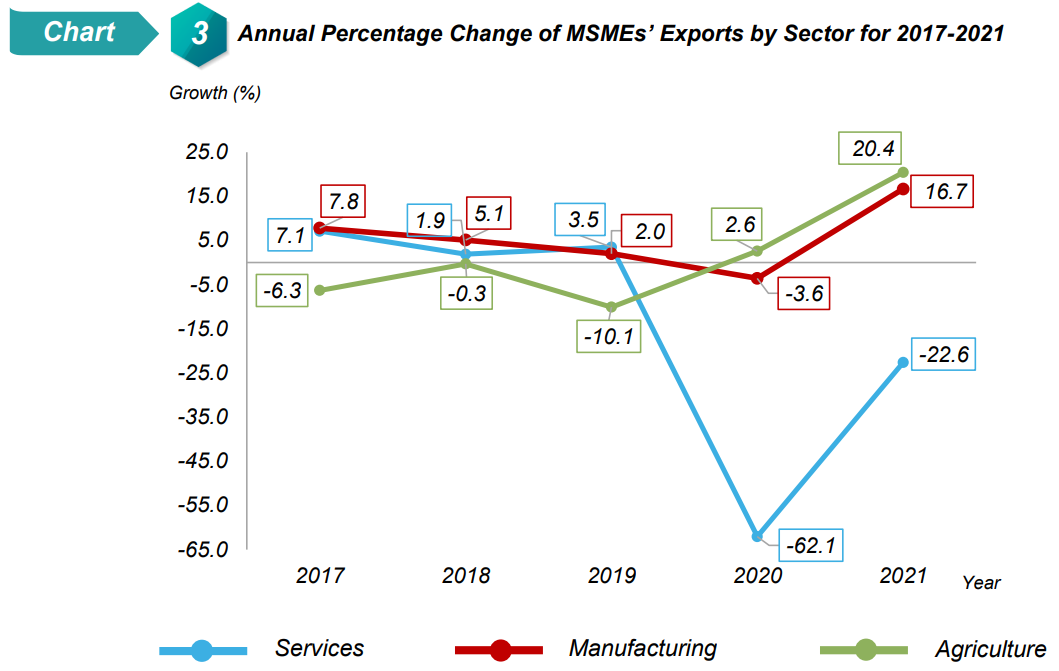 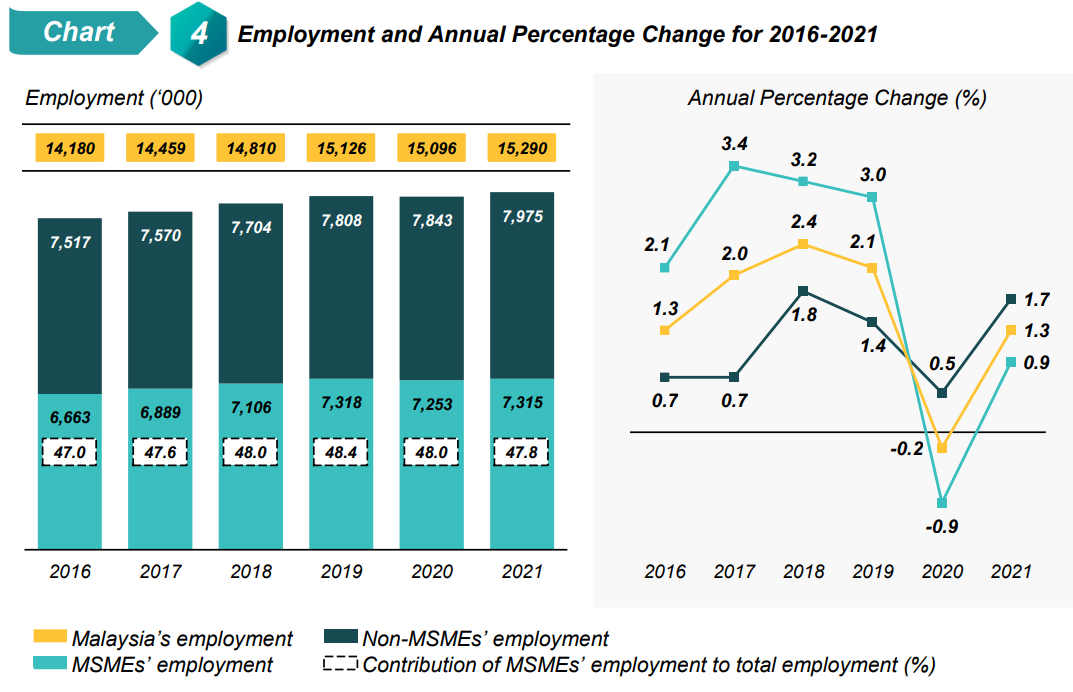 The number of MSMEs’ employment for the Services sector accounted for 4.62 million persons, contributing 49.5 per cent of overall employment in this sector. In terms of annual change, MSMEs’ employment in Services sector grew marginally by 0.7 per cent as compared to negative 0.6 per cent in 2020. The increase was largely contributed by two sub-sectors namely Wholesale & retail trade, food & beverage and accommodation (1.2%) and Other services (2.0%). 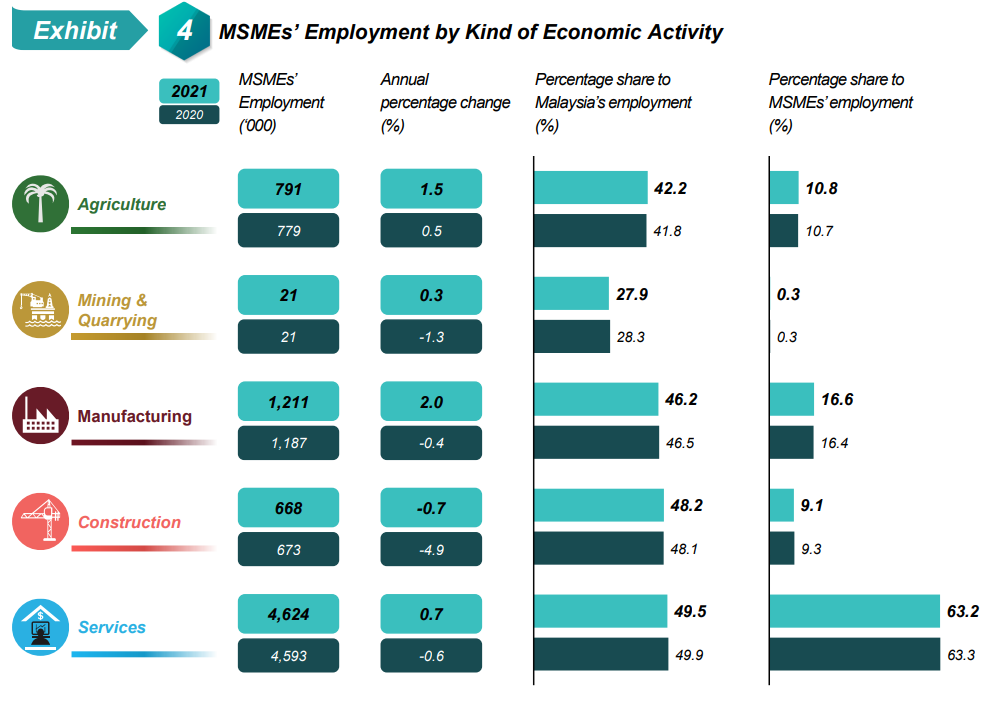 Malaysia’s economy and labour market regained momentum in 2021. MSMEs’ labour productivity as measured by value added per employment grew marginally by 0.1 per cent as compared to negative 6.5 per cent in 2020 to record a productivity value of RM70,827 per person (2020: RM70,723 per person) as shown in Chart 5. The MSMEs’ productivity value was still lower compared to 2019, hence indicating that it has yet to return to the pre-pandemic level. 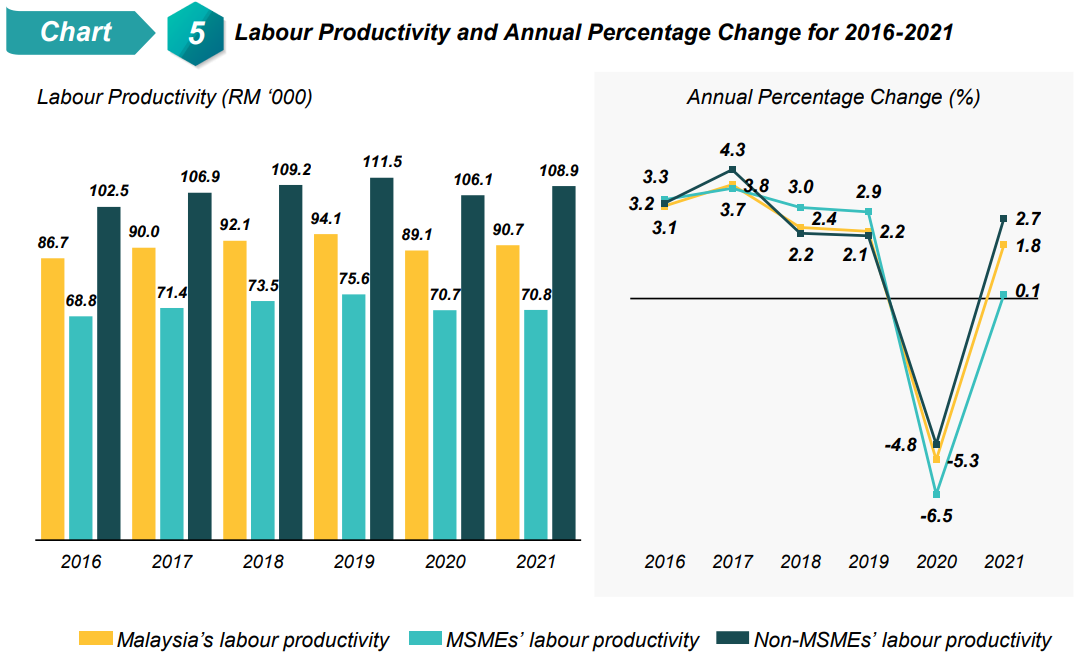 MSMEs’ labour productivity by economic activity showed that Agriculture and Manufacturing were the sectors which recorded increase in productivity during 2021 with the growth of 0.4 per cent and 6.3 per cent, respectively. Meanwhile, MSMEs’ labour productivity in Mining & quarrying (-3.4%), Construction (-3.9%) and Services (-1.8%) sectors remained in a downward trend with a slower rate compared to the previous year (Exhibit 5).

The full publication of Micro, Small & Medium Enterprises (MSMEs) 2021 can be downloaded through  eStatistik portal.