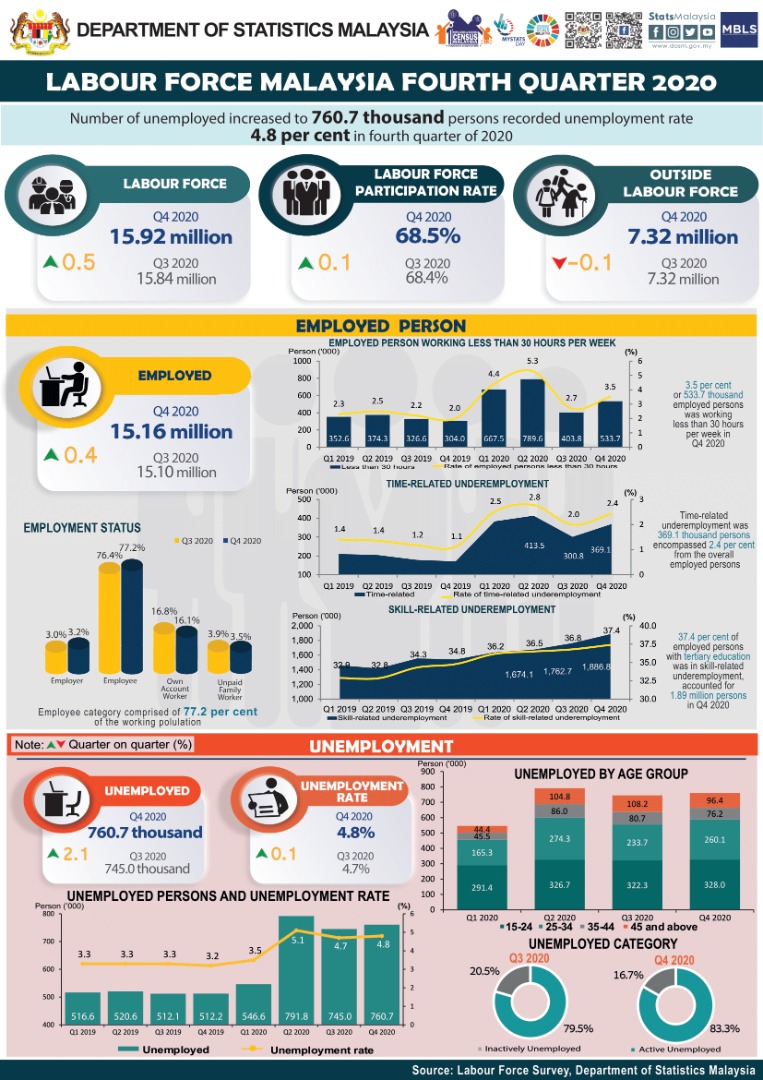 In the fourth and last quarter of 2020, the COVID-19 pandemic heightened, resulting in the implementation of the Conditional Movement Control Order (CMCO) in phases. The CMCO started with Wilayah Persekutuan Kuala Lumpur, Putrajaya and Selangor in October 2020. Later, the CMCO extended to all states until the end of the year, although travel restrictions were relaxed in December 2020. Nevertheless, with the growing number of cases of COVID-19 in this quarter, the labour market was also affected.

The Labour Force Report for Fourth Quarter 2020 presents statistics of labour force based on the Labour Force Survey (LFS) for the fourth quarter of 2020. The survey is carried out using probability sampling through household approach comprising of Malaysian citizens and noncitizens to obtain data on the structure of labour force, employment and unemployment. The principal statistics are presented according to selected demographic and socioeconomic characteristics such as sex, age group, educational attainment, status of employment and occupation.

Labour force participation rate (LFPR) in the fourth quarter of 2020 improved 0.1 percentage point to 68.5 per cent (Q3 2020: 68.4%). The employment-to population ratio which indicates the ability of an economy to create employment, remained at 65.2 per cent (Q3 2020: 65.2%). Meanwhile during this quarter, outside labour force stood at 7.32 million persons or 31.5 per cent from the total working age population. [Exhibit 1] 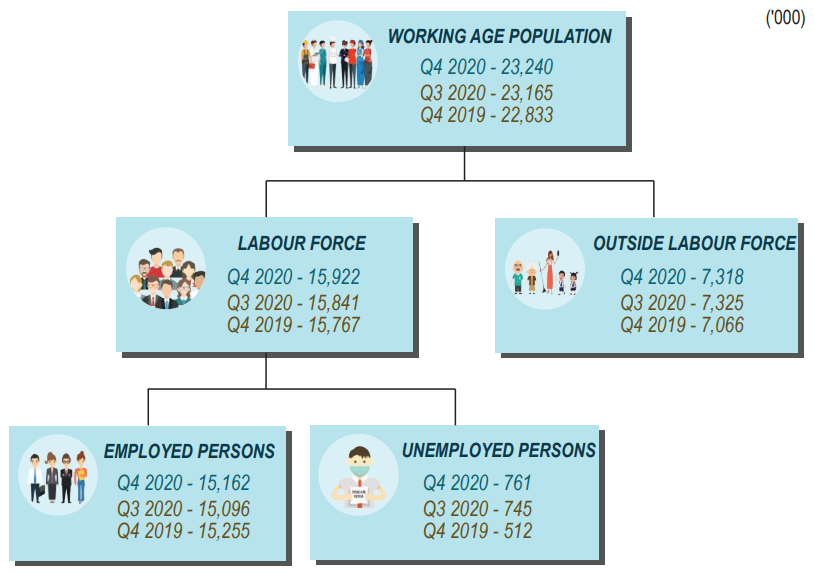 In this quarter, the employment to population ratio for male increased 0.2 percentage points to 76.9 per cent, whereas the ratio for female stayed at 52.7 per cent as compared to the third quarter of 2020. [Exhibit 3] 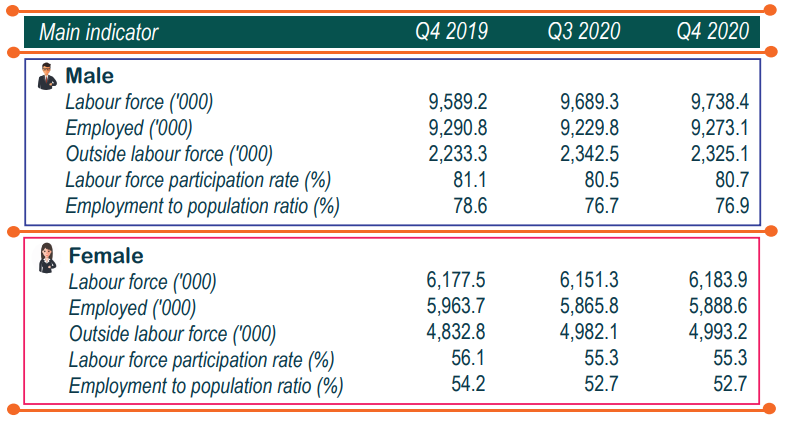 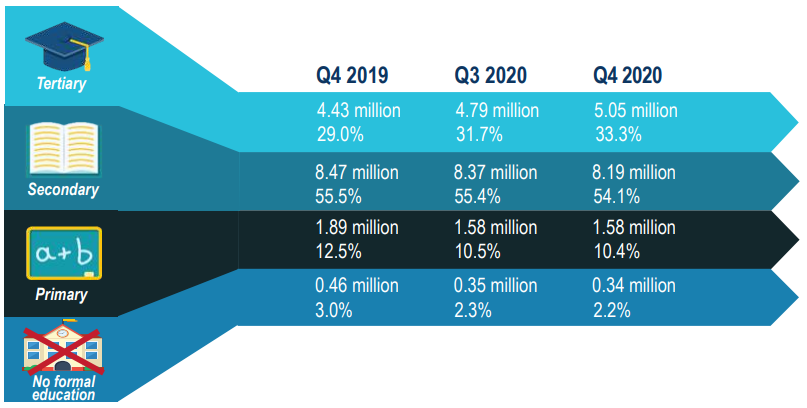 As observed for the time series of Q1 2019 to Q4 2020, the percentage share of those working less than 30 hours per week to the total employed persons was within the range of 2.0 per cent to 2.5 per cent during the year of 2019. However, the share increased began in the first quarter of 2020 at 4.4 per cent and continued to increase at a high rate of 5.3 per cent in the second quarter of 2020 due to the adversely impact of the MCO in the mid of March 2020.[Exhibit 8]

Time-related underemployment which refer to a group of people who employed less than 30 hours per week during the reference week due to the nature of their work or because of insufficient work and were able and willing to accept additional hours of work.

During the fourth quarter of 2020, time-related underemployment increased to 369.1 thousand persons from 300.8 thousand persons recorded in third quarter of 2020. Out of the total employed person, time-related underemployment encompassed 2.4 per cent, went up by 0.4 percentage points as against previous quarter (Q3 2020: 2.0%). This was due to the reopening of more businesses with longer operation hours following the implementation of various phases of MCO during the quarter.[Exhibit 9] 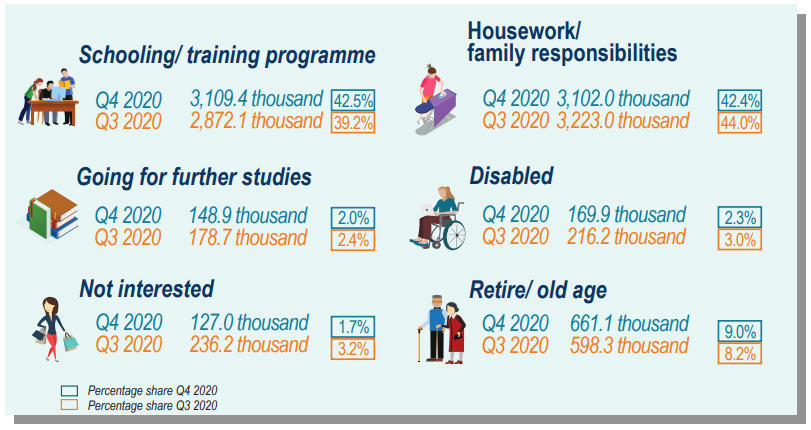