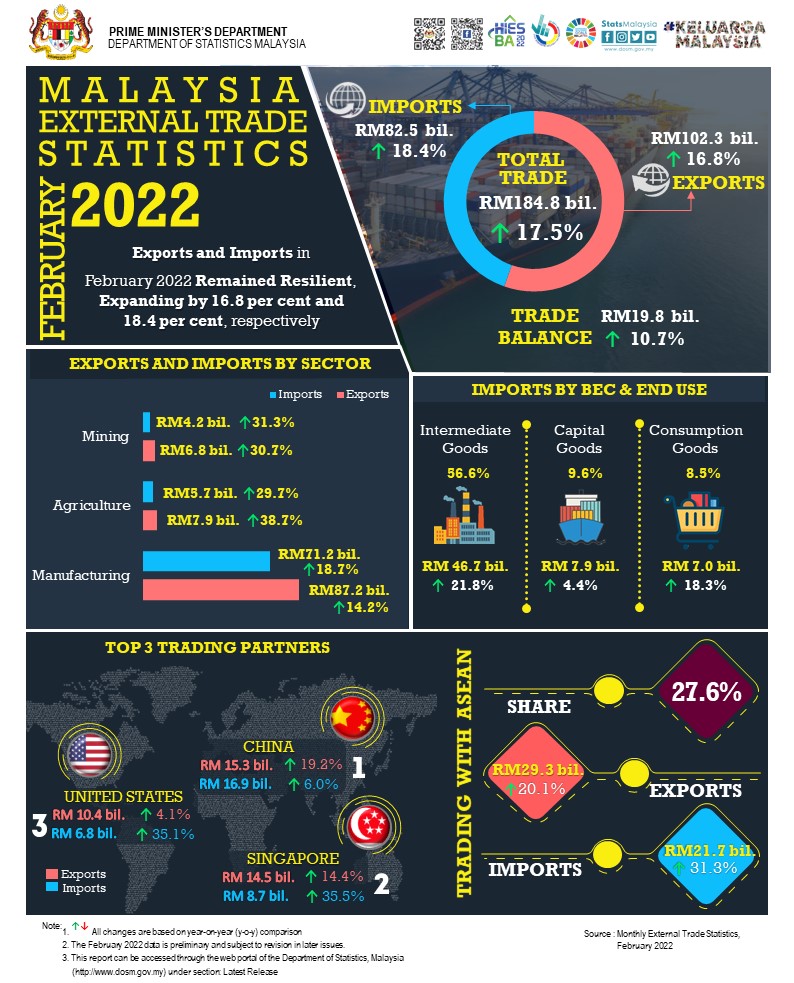 In comparison to January 2022, total trade, exports and imports decreased by 9.2 per cent, 7.9 per cent and 10.8 per cent, respectively. In contrary, trade balance recorded a positive growth of 6.6 per cent.

For the period of January to February 2022, the performance of total trade, exports, imports and trade balance remained resilient with double-digit growth. The total trade went up by 21.4 per cent supported by the expansion in exports (+20.4%) as well as imports (+22.6%). Consequently, trade balance recorded a higher value of RM38.3 billion.

Malaysia’s exports was recorded at RM102.3 billion, increased by 16.8 per cent as compared to February 2021. The increase was driven by both domestic exports and re-exports. Domestic exports stood at RM84.2 billion and contributed 82.4 per cent to total exports, grew by 17.9 per cent. On the same note, re-exports with a value of RM18.0 billion, grew by 11.7 per cent y-o-y. Meanwhile, for monthly comparison, exports fell by 7.9 per cent or RM8.8 billion. Analysis of the seasonally adjusted terms m-o-m, exports increased by 5.2 per cent or RM5.7 billion to RM115.2 billion.

Malaysia’s imports in February totaled RM82.5 billion, continued to register a growth of 18.4 per cent or RM12.8 billion. On a m-o-m basis, imports dropped by 10.8 per cent or RM10.0 billion. Analysis of the seasonally adjusted terms m-o-m, imports rose by 0.9 per cent to reach RM92.3 billion.

Imports by end use for three main categories namely intermediate goods, consumption goods and capital goods stood at RM61.6 billion, an increase of 18.9 per cent.

1. The February 2022  data is preliminary and subject to revision in later issues.
2. This report can be accessed through the web portal of the Department of Statistics, Malaysia (https://www.dosm.gov.my) under section: Latest Release.