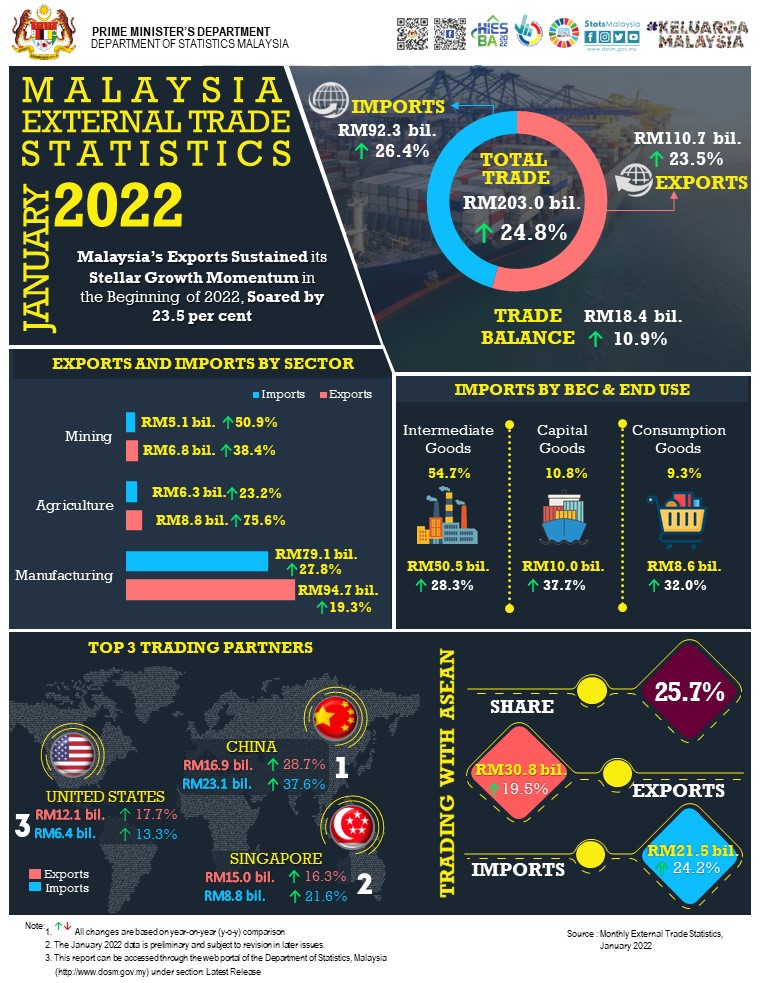 Malaysia’s total trade performance continued its growth momentum in January 2022, expanded by 24.8 per cent, reaching RM203.0 billion as compared to RM162.6 billion in the previous year. Exports grew by 23.5 per cent to RM110.7 billion in January 2022, the 17th consecutive month of year-on-year (y-o-y) expansion since September 2020. This was the fifth consecutive months of export value exceeded RM100 billion. Imports totalled RM92.3 billion, continued to register a growth of 26.4 per cent from the preceding year. Trade value continued to record a surplus, with a value of RM18.4 billion, an increase of 10.9 per cent from the previous year.

Malaysia’s exports in January 2022 maintained its double-digit growth for six consecutive months, registering an increase of 23.5 per cent to RM110.7 billion compared to January 2021. The expansion was supported by both domestic exports and re-exports. Domestic exports totalled RM90.9 billion and contributed 82.1 per cent to total exports, increased by 26.1 per cent. On the same note, re-exports with a value of RM19.8 billion, grew by 13.2 per cent y-o-y. In comparison to December 2021, exports shrank by 10.6 per cent or RM13.1 billion. Analysis of the seasonally adjusted terms m-o-m, exports decreased by 7.3 per cent or RM8.6 billion to RM109.1 billion. 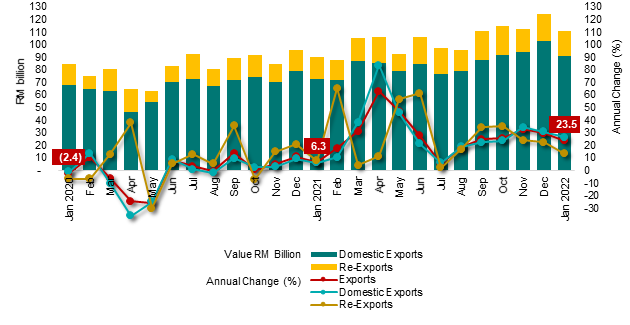 Malaysia’s imports in January 2022, expanded by 26.4 per cent from RM73.0 billion in the preceding year to RM92.3 billion. In comparison to December 2021, imports decreased marginally 0.6 per cent or RM538.2 million. Based on seasonally adjusted terms, imports rose 1.4 per cent to RM91.3 billion.

On a y-o-y basis, imports by end use registered a positive growth with the increases in the intermediate goods, capital goods and consumption goods.

1. The January 2022  data is preliminary and subject to revision in later issues.
2. This report can be accessed through the web portal of the Department of Statistics, Malaysia (https://www.dosm.gov.my) under section: Latest Release.