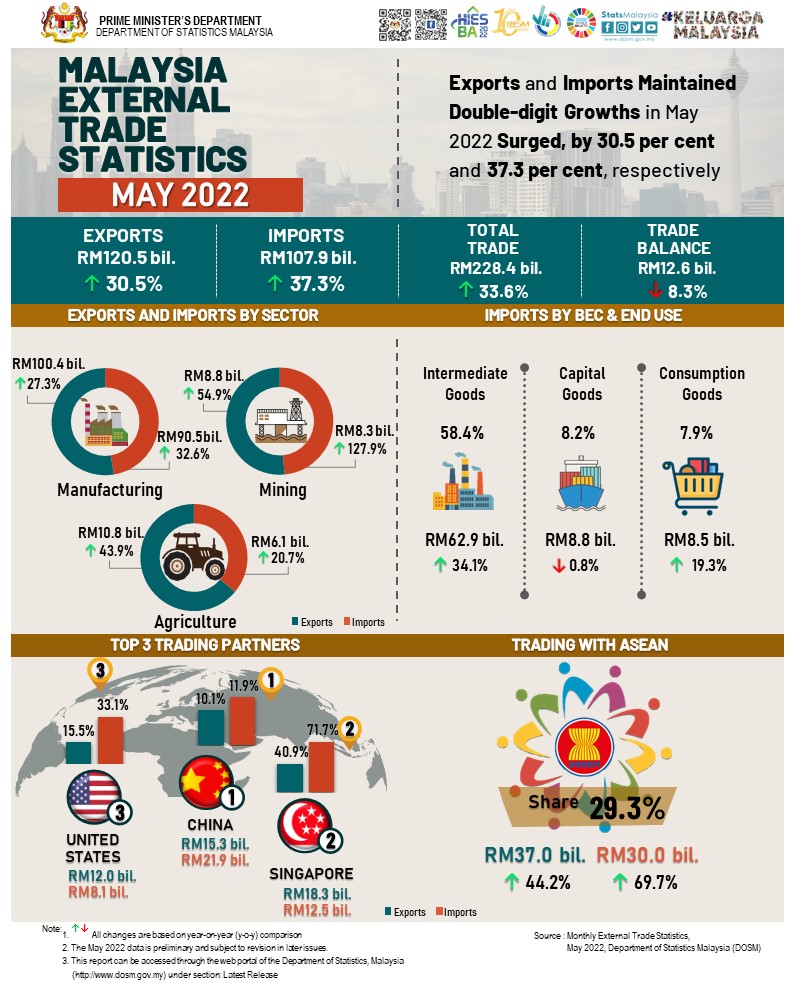 Malaysia’s trade performance remained resilient and maintained its upward momentum in May 2022. Total trade increased by 33.6 per cent from RM170.9 billion in the preceding year to RM228.4 billion, the 16th consecutive month of double-digit growth since February 2021. Consistent with the trade’s performance, exports and imports also registered double-digit growths of 30.5 per cent and 37.3 per cent, respectively as compared to May 2021. Malaysia’s imports recorded all-time high at RM107.9 billion, in line with the surge in intermediate goods by 34.1 per cent, signified a positive sign of domestic economic activity. Trade value continued to record a surplus, with a value of RM12.6 billion, decreased by 8.3 per cent from the previous year.

In comparison to April 2022, the performance of total trade, exports and trade surplus showed declines of 1.4 per cent, 5.6 per cent and 46.3 per cent, respectively. Meanwhile, imports increased by 3.6 per cent.

For the period of January to May 2022, total trade, exports, imports and trade surplus continued to record positive growths. Total trade went up by 25.1 per cent, supported by the expansion in exports (+23.5%) as well as imports (+27.0%). Consequently, trade surplus recorded a higher value of RM101.1 billion.

Malaysia’s exports in May 2022 widened to RM120.5 billion, registering a double-digit growth of 30.5 per cent year-on-year (y-o-y) and maintained the positive growth for 21st consecutive months since September 2020. Export value growth in May 2022 was supported by both, domestic exports and re-exports. Domestic exports was valued at RM96.0 billion contributed 79.7 per cent to total exports, grew by 22.1 per cent, y-o-y. Meanwhile, re-exports registered RM24.4 billion, increased by 79.1 per cent as compared to the previous year. In comparison to April 2022, exports posted a decrease of 5.6 per cent or RM7.1 billion. Analysis of the seasonally adjusted terms m-o-m, exports rose by 1.1 per cent or RM1.3 billion to RM125.4 billion.

Malaysia’s imports recorded all-time high at RM107.9 billion in May 2022, expanded by 37.3 per cent as compare to the same month previous year. In comparison to April 2022, imports also posted an increase of 3.6 per cent or RM3.8 billion. Based on seasonally adjusted terms, imports rose 6.5 per cent to RM108.4 billion. On a y-o-y basis, imports by end use registered a positive growth with the increases in the intermediate goods and consumption goods.

1. The May 2022  data is preliminary and subject to revision in later issues.
2. This report can be accessed through the web portal of the Department of Statistics, Malaysia (https://www.dosm.gov.my) under section: Latest Release.