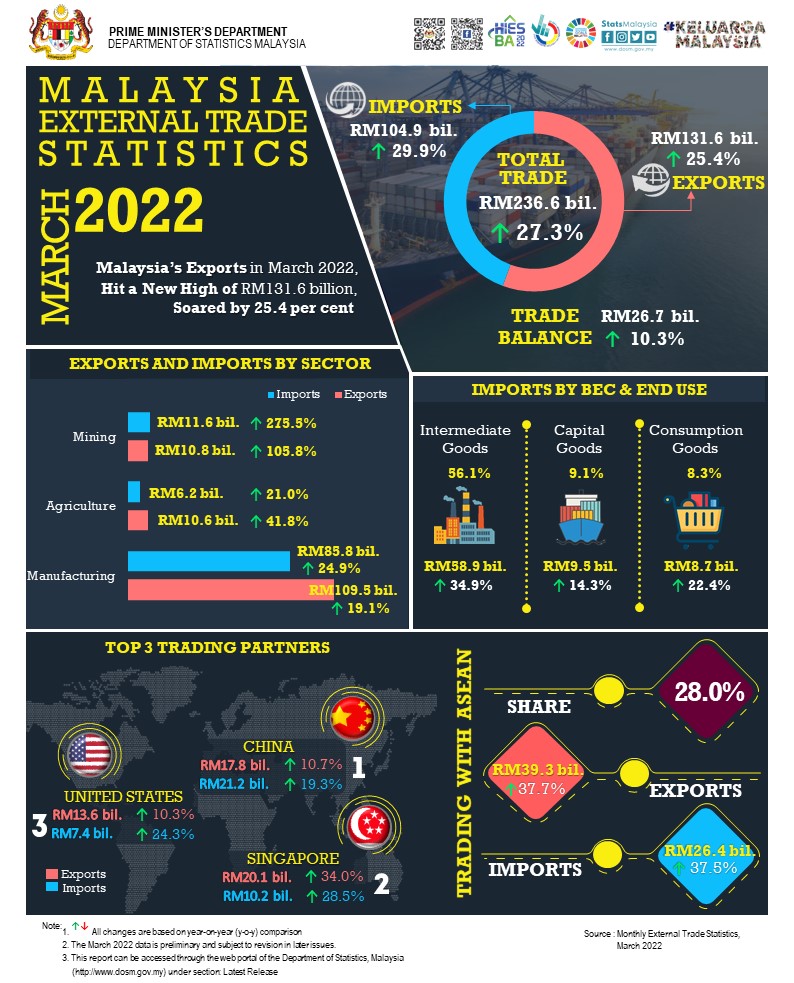 Malaysia’s total trade performance remained resilient in March 2022 with a favorable growth of 27.3 per cent, reaching RM236.6 billion as compared to RM185.8 billion in the preceding year. Exports and imports value recorded the highest monthly amount in history with RM131.6 billion and RM104.9 billion respectively. Exports growth continued to expand with 25.4 per cent, while imports accelerated by 29.9 per cent. Subsequently, trade balance registered a surplus of RM26.7 billion, grew by 10.3 per cent from the previous year.

Malaysia’s exports registered an increase of 25.4 per cent which amounted to RM131.6 billion as compared to March 2021. This performance was primarily led by domestic exports with a value of RM106.9 billion. On the other hand, re-exports grew 38.0 per cent to reach RM24.7 billion. Exports increased 28.7 per cent or RM29.4 billion as compared to previous month. Analysis of the seasonally adjusted terms m-o-m indicated that exports increased 10.8 per cent to reach RM127.6 billion.

Malaysia’s imports value in March 2022 reaching RM104.9 billion and further registered a substantial growth of 29.9 per cent. A double-digit growth of 27.3 per cent was also recorded on m-o-m basis. Based on seasonally adjusted terms m-o-m, imports rose by 13.8 per cent to RM105.0 billion.

Imports by end use for three main categories namely intermediate goods, consumption goods and capital goods posted a strong growth of 30.5 per cent to RM77.1 billion. 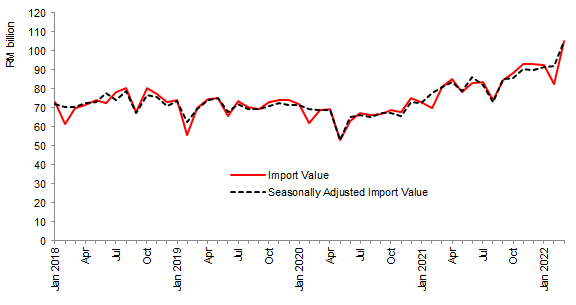 1. The March 2022  data is preliminary and subject to revision in later issues.
2. This report can be accessed through the web portal of the Department of Statistics, Malaysia (https://www.dosm.gov.my) under section: Latest Release.