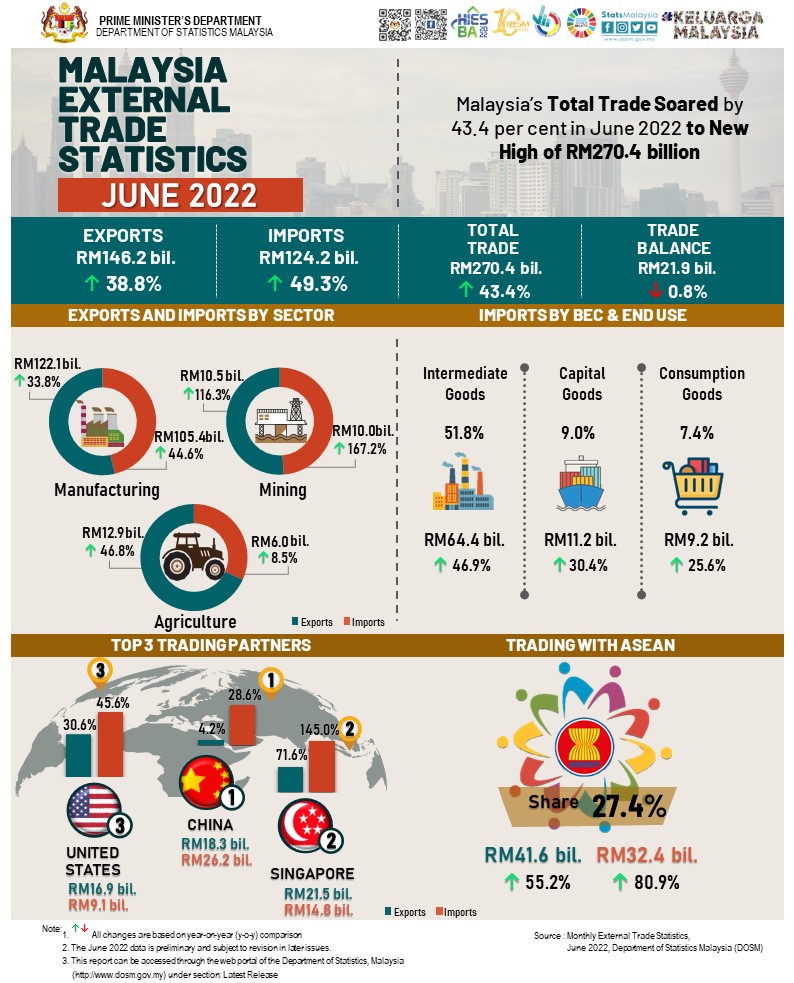 Malaysia’s total trade continued its strong performance in June 2022, with a value of RM270.4 billion and subsequently recorded a growth of 43.4 per cent from RM188.5 billion in the same period of preceding year. Exports and imports reached a new high value of RM146.2 billion and RM124.2 billion, respectively. In terms of growth, exports expanded 38.8 per cent while imports surged 49.3 per cent. Trade surplus amounted to RM21.9 billion, decreased 0.8 per cent as compared to June 2021.

From a monthly comparison perspective, trade surplus posted an outstanding performance with 72.7 per cent. Exports grew 21.3 per cent, while total trade 18.4 per cent and imports 15.2 per cent.

For the first half of 2022, total trade, exports and imports remained double-digit growth momentums. Total trade expanded 28.2 per cent, supported by the increases in exports (+26.1%) and imports (+30.9%). Meanwhile, trade surplus rose by 6.7 per cent.

Malaysia’s exports remained strong with a new high value of RM146.2 billion, went up by 38.8 per cent in June 2022. The performance was driven by increases in domestic exports 30.6 per cent and accelerated growth of re-exports with 72.2 per cent. Domestic exports dominated total exports with an amount of RM110.6 billion and thus contributed 75.7 per cent, while re-exports totalled RM35.6 billion with a share of 24.3 per cent. On the other hand, exports recorded an increase of 21.3 per cent as compared to May 2022. Analysis of the seasonally adjusted terms month-on-month (m-o-m), exports rose by 19.5 per cent (+RM24.4 billion) to RM149.8 billion. 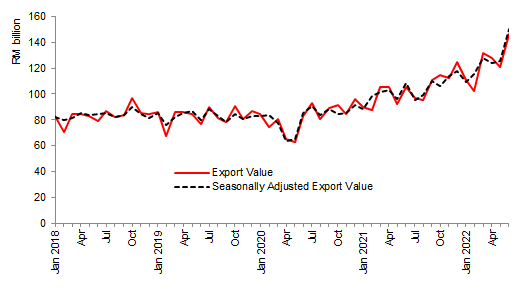 1. The June 2022  data is preliminary and subject to revision in later issues.
2. This report can be accessed through the web portal of the Department of Statistics, Malaysia (https://www.dosm.gov.my) under section: Latest Release.