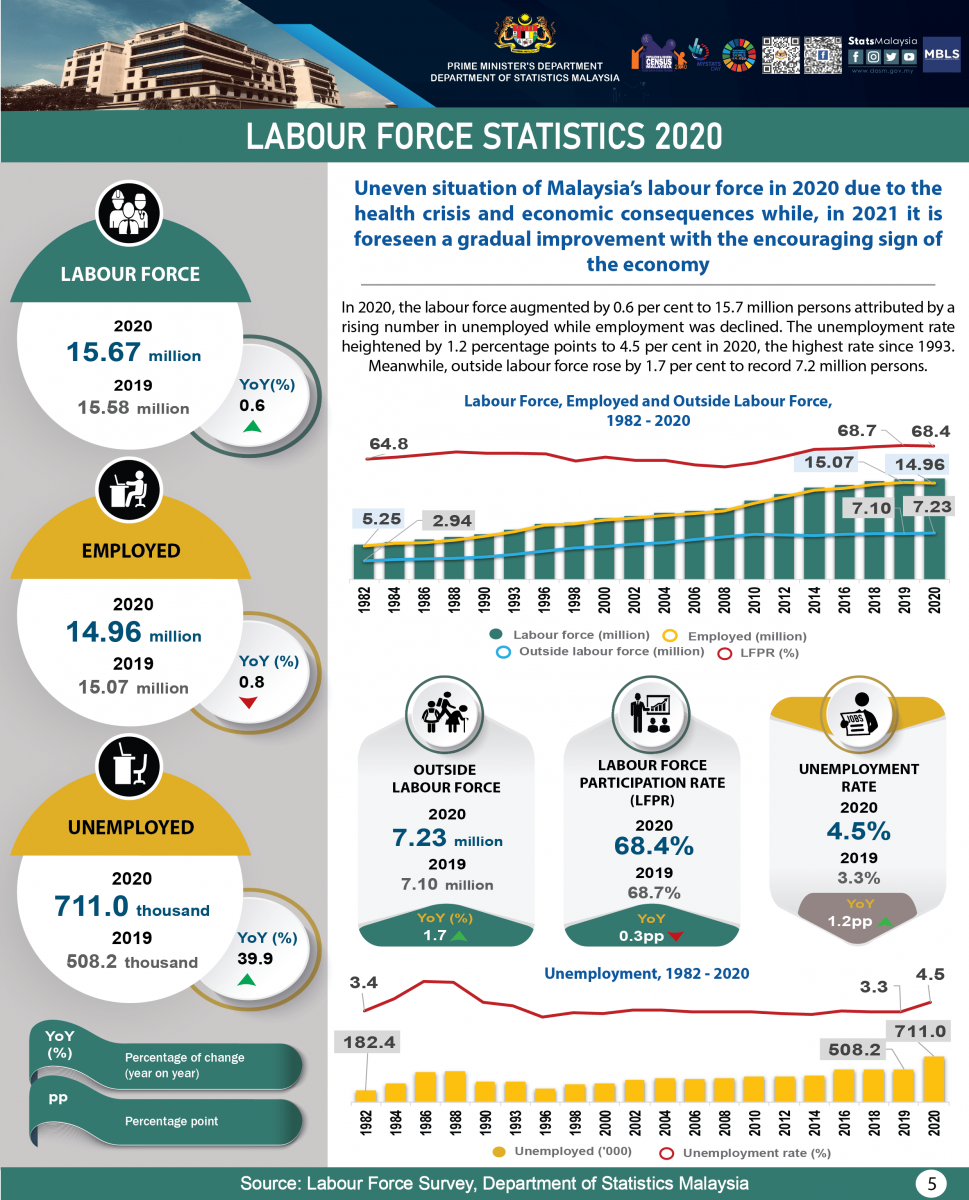 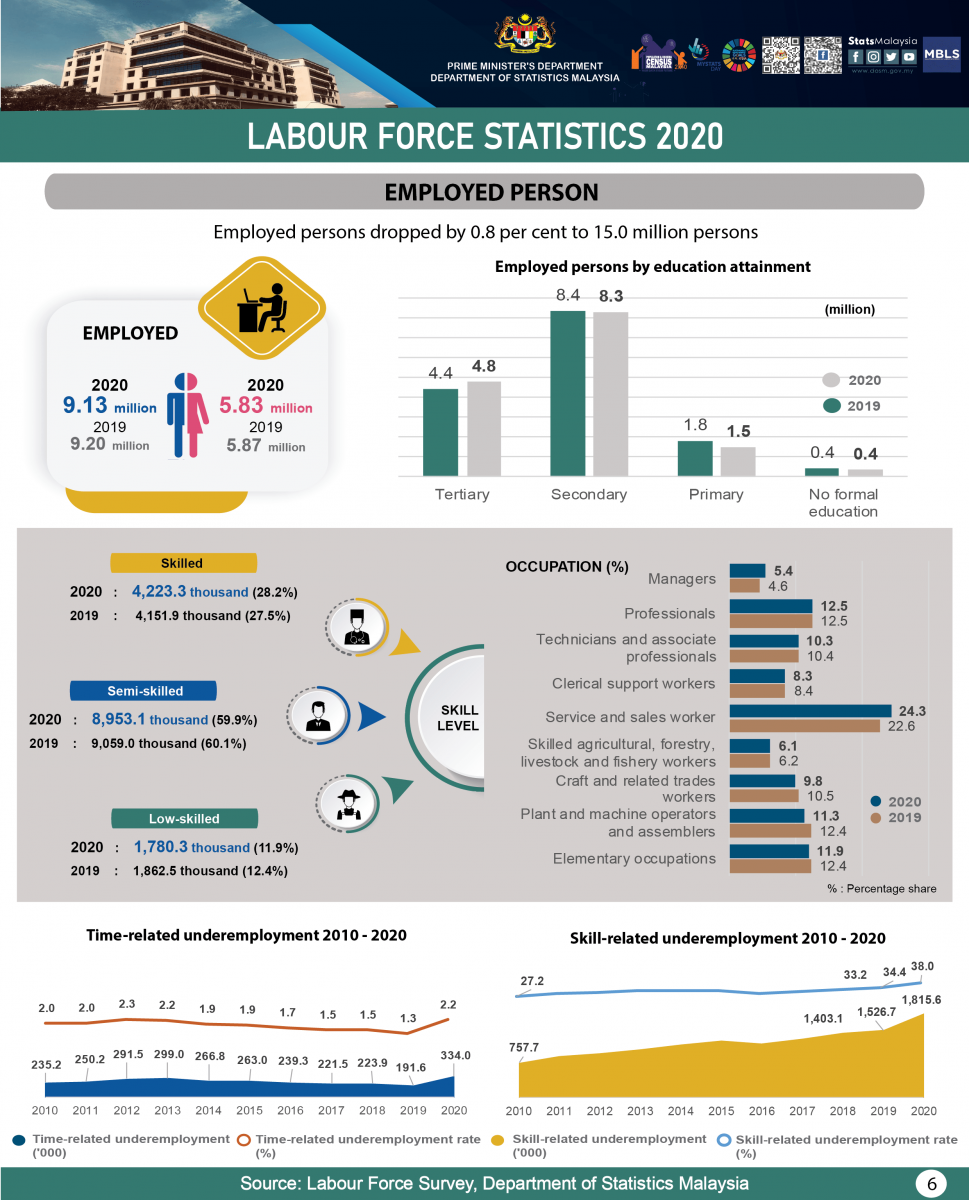 The COVID-19 outbreak was first discovered on November 2019 in Wuhan, China which had spread all over the world. To curb the pandemic, strict containment measures were adopted by many countries in the world throughout 2020. This had caused changes in the global economy. The International Monetary Fund (IMF) described that it was the worst global economy declined since the Great Depression of the 1930s. They estimated that global economy shrunk by4.4 per cent in 2020 (BBC, 2021)[1]. Similarly, the global labour market thrown into disarray that resulted in job losses and reductions in working hours.

In Malaysia, the first containment measure known as Movement Control Order (MCO) was imposed starting from 18 March 2020. In the early stages of MCO, only essential services were allowed to operate while non-essential activities; comprising of major parts of the economy including manufacturing and education services were restricted, thus affecting working hours and businesses revenue. Traveling activities were also banned, impacting transportation and tourism related activities. As the number of COVID-19 daily new cases started to reduce, Conditional MCO (CMCO) took place beginning on 4 May 2020. During this period, more economic activities started to resume with strict standard operating procedures (SOP) while both inter-state and inter-district travel was remained prohibited.

The last month of 2020 observed that the CMCO was lifted for almost all states except for Wilayah Persekutuan Kuala Lumpur, Selangor and Sabah. The businesses continued to operate with adherence to strict SOP while traveling activities were permitted again, hence encouraging domestic tourism activities during the month. Meanwhile, heavy rain which caused flood disaster in several states, Terengganu, Johor, Pahang, Sabah and Sarawak had affected businesses operations and traveling activities.

To cushion the impact of COVID-19 pandemic to people, businesses and economy, the government had rolled out several policies and initiatives. One of the main initiatives was the National Economic Recovery Plan (PENJANA) amounted to RM35 billion. Apart from this initiative was the Wage Subsidy Programme (PSU) with an allocation of RM13.8 billion, benefiting over 2.64 million employees from 322,177 employers. In addition, there were also the implementation of Hiring Incentive Programme and Training Assistance as well as Reskilling and Upskilling Programme. To assist businesses, the government executed various grant and financing programmes among others were PRIHATIN Special Grant, PENJANA small and medium enterprises (SMEs) Financing, PENJANA Tourism Financing, Bumiputera Relief Financing, Agrobank Micro Credit Financing, Technical and Digital Utilisation Support initiative and TEKUN Business Recovery Scheme. These initiatives had assisted many affected individuals and business especially SMEs in the pandemic.

LFPR edged down by 0.3 percentage points to 68.4 per cent

In 2020, the number of Malaysia’s labour force which comprised of the employed and unemployed persons augmented by 0.6 per cent or equivalent to 86.1 thousand persons to 15.7 million persons as against in the previous year (2019: 15.6 million persons). Nevertheless, unlike thepre-crisis period, the increased in labour force during the year was attributed by a rising number of unemployed persons. The labour force participation rate (LFPR) in 2020 edged down by 0.3 percentage points to 68.4 per cent (2019: 68.7%). [Exhibit 1] 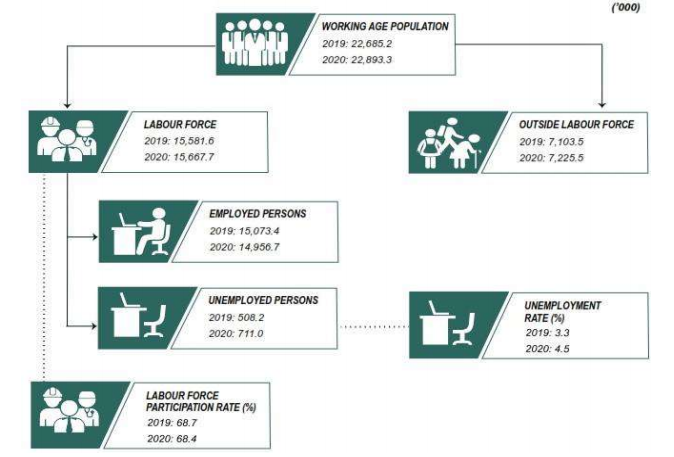 Employed persons dropped by 0.8 per cent to 15.0 million persons

In line with this, the rate of time-related underemployment in 2020 heightened by 0.9 percentage points to 2.2 per cent (2019: 1.3%), registering an addition of 142.4 thousand persons to334.0 thousand persons. Time-related underemployment is defined as those who were employed less than 30 hours per week due to the nature of their work or because of insufficient work; and were able and willing to work additional hours of work. [Chart 4]

Generally, overeducation job mismatch refers to a situation where a person had to accept a job that requires skills lower than his educational achievement. In this context, it can be portrayed through the indicator of skill-related underemployment which measures those with tertiary education and working in the category of semi-skilled and low-skilled jobs.

The health crisis of COVID-19 which had been surrounded the country for a year had deteriorated the overall jobs demand in the country. This led to a higher competition in labour market which became one of the reasons for jobseekers especially graduates to take any jobs for living regardless their qualification. In 2020, skill-related underemployment increased by 18.9 per cent (+288.9 thousand persons) to record 1.8 million persons (2019: 1.5 million persons). Thus, the rate of skill-related underemployment to employed persons with tertiary education was augmented from 34.4 per cent in 2019 to 38.0 per cent in 2020. [Chart 5]

In addition, the number of employed persons who were temporarily not working recorded a sharp increase of 614.3 per cent or 879.6 thousand persons in 2020 (2019: 123.1 thousand persons). As the unprecedented event occurred during the year led to the workplace closure and reduction in working hours, this had caused the number to increase much higher than a pre-crisis period.

Unemployment rate heightened by 1.2 percentage points to 4.5 per cent in 2020

Housework/ family responsibility was the largest share of outside labour force

Chart 7: Share of outside labour force by reasons for not seeking work, Malaysia, 2019 and 2020

Throughout 2020, the COVID-19 pandemic that has engulfed the world including Malaysia has had a massive impact on the economy and social. The pandemic had changed the economic and social landscape of the country as well as the labour market. This situation caused many job losses and sources of income. In addition, business activities had to be temporarily halted and some had undergone business closure. Consequently, unemployment rate of the country reached a rate of 4.5 per cent in 2020, the highest in almost three decades.

Various phases of MCOs had been implemented to curtail the health crisis until the end of 2020 to fight the uneven pandemic situation coupled with a continuous spike of new daily cases. However, towards the year end, most business activities were permitted to reopen with adherence to a strict SOP and continues practicing a new norm except for cinemas and entertainment & recreational activities as well social gathering which remained prohibited. This containment measures were crucial to balance between economic recovery and the health situation. Thus, the labour force condition portrayed a modest improvement towards the end of 2020.

Moreover, various initiatives introduced by the government to support the survival of the businesses. With various efforts and initiatives implemented, it is hoped that they will relieve and reduce the burden of the businesses especially small businesses and in turn it could assist in restoring and accelerate the reviving of the labour market. With all initiative programmes coupled with the continuous economic recovery path and the rolled-out of vaccination programme in 2021, it is foreseen that Malaysia’s labour market will grow marginally and albeit in a challenging environment due to the uncertainty of the health crisis situation in Malaysia.

The detailed information and technical notes are published in the Force Survey Report, Malaysia, 2020. This report is accessible and downloadable through the application eStatistik in DOSM web page, www.dosm.gov.my.