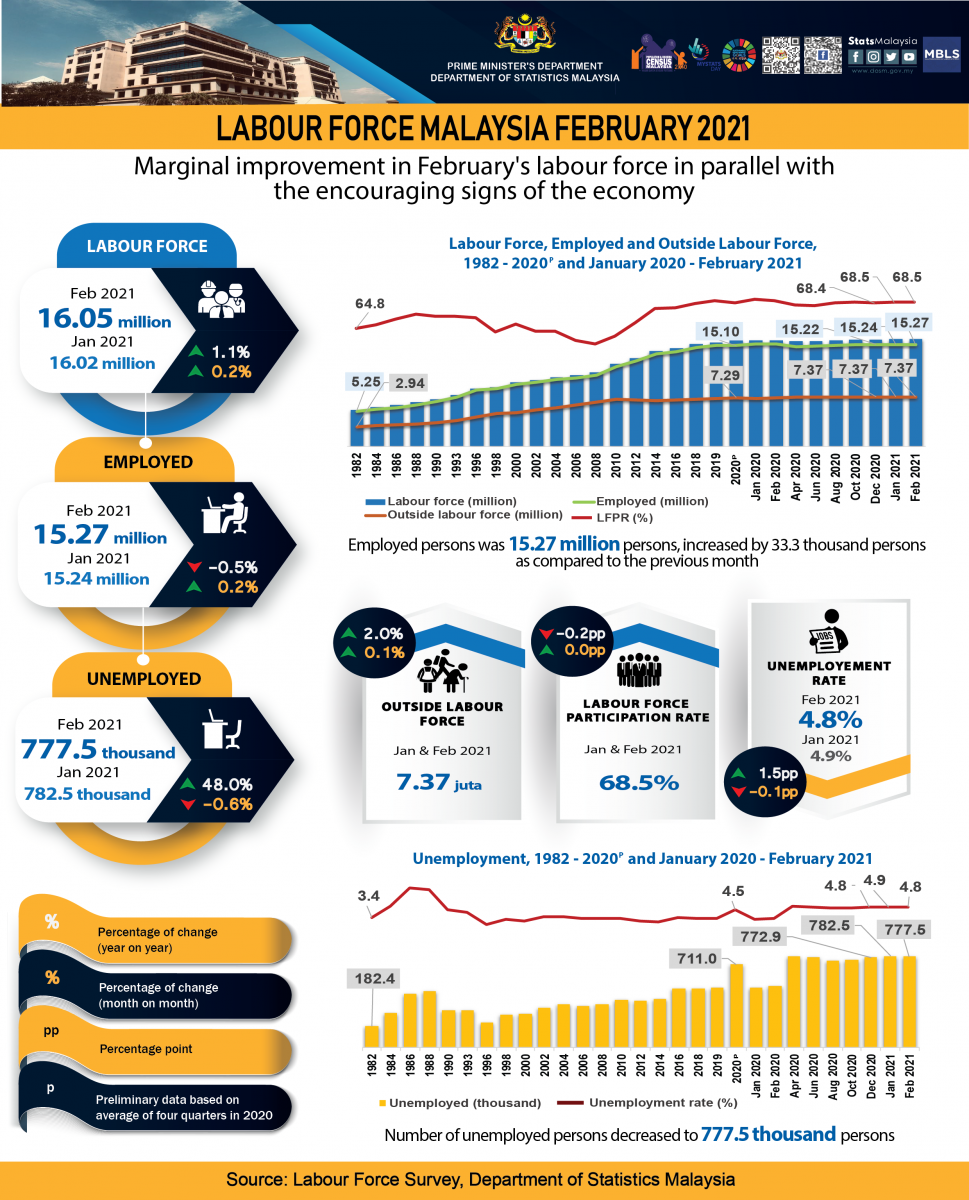 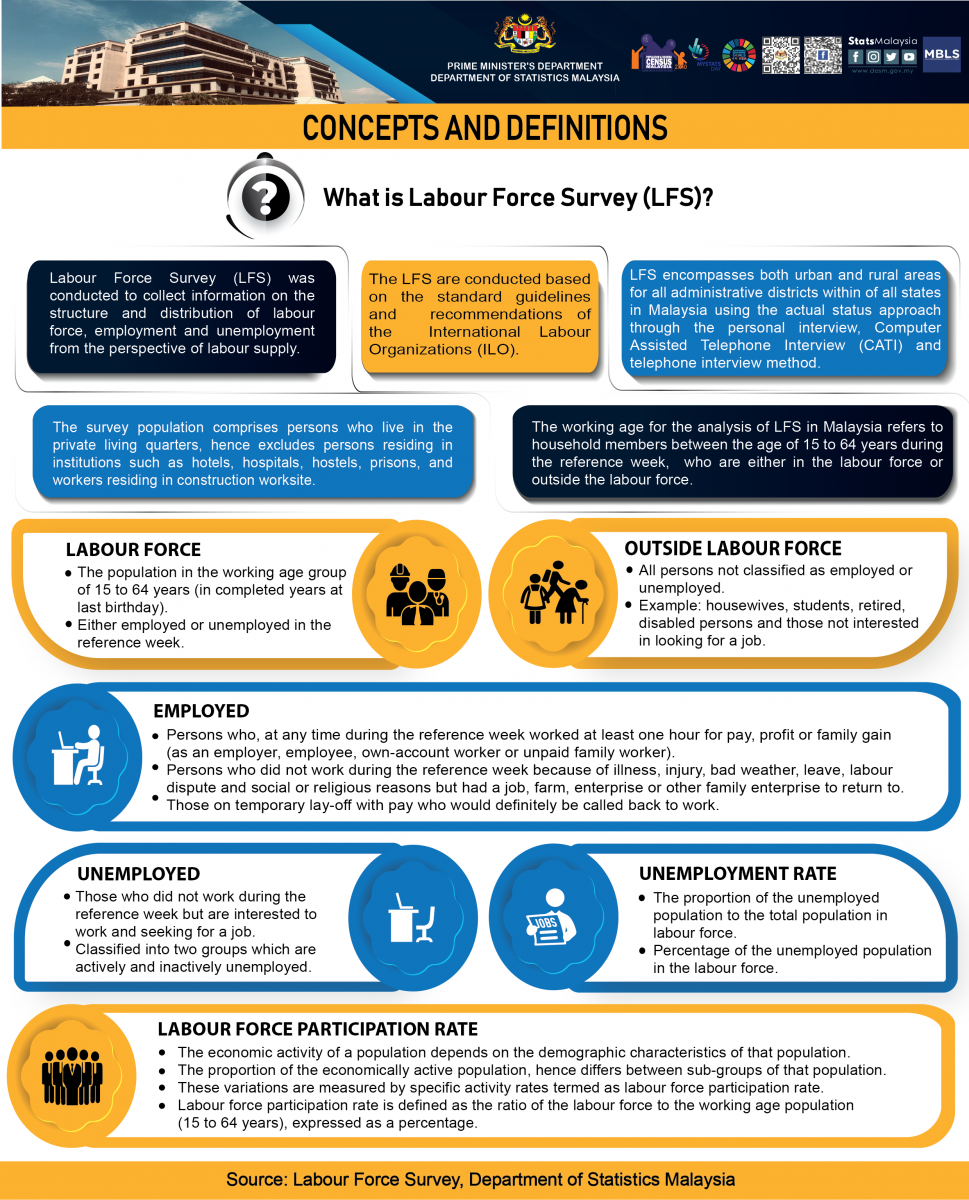 The Malaysia’s near-term economic prospects are foreseen to be optimistic in line with the deployment of COVID-19 vaccination programme. The latest release of Leading Index for January 2021 posted  year-on-year increase of 8.2 per cent. Thus, the labour market continued to experience recovery with the encouraging signs of the economy.

Although the Movement Control Order (MCO) had been extended to 18 February 2021 in all states except for Sarawak, three additional businesses were allowed to operate namely night market, hair salon and car wash with strict standard operating procedures (SOP). On 10 February 2021, the remaining retail sectors were permitted to resume operations which include clothing, fashion & accessory, and shoe stores as well as photography equipment and services to ensure economic sustainability especially among small businesses. Later, more sports and fitness activities were allowed including gym activities, golf, motorsports, tennis and badminton. In addition, the first phase of vaccination programme which started on 24 February 2021 provided some relief to the businesses and community.  February 2021 also witnessed the Chinese New Year was celebrated modestly with adherence to SOP where only  15 immediate family members living within the same districts were allowed to gather for the traditional reunion dinner.

Additionally, the short-term economic indicators in February 2021 showed that exports and imports registered a decrease of 2.3 per cent and 4.5 per cent respectively. On the contrary, trade surplus increased by 7.6 per cent as compared to the previous month.

The Labour Force Report for February 2021 describes the labour supply situation as the country entered the twelfth month of various phases MCO. The report will elaborate on the month-on-month changes to examine the immediate effects of the MCO to contain the spread of COVID-19. Users are advised to interpret the monthly statistics with caution since they are non-seasonally adjusted. In addition, annual changes from the same month of the previous year are also reported.

Employed persons rose by 0.2 per cent to 15.27 million persons

By economic sector, the number of employed persons in the Services sector remained on an upward trend month-on-month mainly in Wholesale & retail trade; Education and Human health & social work activities. Meanwhile, the employment in tourism related industries persisted on a declining trend as a consequence of COVID-19 containment measures. Employed persons in the Manufacturing and Construction sectors continued to register a positive growth while Agriculture and Mining & Quarrying sectors recorded reductions in the number of employed persons.

The employment-to-population ratio which indicates the ability of an economy to create employment remained stagnant at 65.2 per cent in February 2021. However, year-on-year basis, the ratio lessened by 1.2 percentage points as against 66.4 per cent (February 2020). [Chart 1]

This group comprised mostly of daily income earners working as small business operators such as small retailers; hawkers; sellers in markets and stalls as well as smallholders. The increase in own-account workers could partly be due to the initiatives provided by the government to help the micro as well as small and medium enterprises (SMEs) namely the PRIHATIN Special Grant 2.0 (GKP 2.0). As of  5 February 2021, a total of RM155 million has been credited to about 52,000 SMEs4. [Chart 2]

Chart 2: Employed person by status in employment, January 2021 and February 2021

As compared to the previous month, the number of employed persons who were temporarily not working in February 2021 reduced to 150.8 thousand persons (January 2021: 158.9 thousand persons). During the month, most of the business activities were permitted to resume operation including night markets, florists and nurseries, handicraft shops, antique stores, carpet stores, sports equipment shops, cosmetic stores and vehicle accessories store. Furthermore, starting on 18 February 2021, all restaurants were allowed to accept dine-in customers with more than two persons per table5.

In the meantime, year-on-year, the number of employed persons who were temporarily not working increased by 81.2 thousand persons (116.6%) as compared to 69.6 thousand persons in February 2021. This group of persons, who were most likely not able to work was not categorised as unemployed as they had work to return to.

Unemployment rate dropped to 4.8 per cent in February 2021

In February 2021, the number of inactively unemployed who believed that there were no jobs available rose by 3.8 per cent to 130.1 thousand persons (January 2021: 125.3 thousand persons).

Chart 4: Unemployed category and duration of unemployment, January 2021 and February 2021

LFPR was unchanged at 68.5 per cent

Chart 8: Share of outside labour force by reasons for not seeking work, January and February 2021

The Wage Subsidy Programme (PSU) 1.0, had benefited a total of 322,177 employers and 2.64 million registered employees as of the closing date for registration of this programme on 30 September 2020.  As of 26 February 2021, a total of RM12.77 billion was distributed through this programme. In the meantime, for the Wage Subsidy Programme (PSU) 2.0, a total of RM808.31 million had been distributed to 66,591 employers to assist them in safeguarding their operation and sustaining jobs for  554,876 employees. Additionally, there were 131,568 employees who secured employment through the Recruitment Incentive Programme and Training Assistance with Manufacturing and Wholesales & retails trade were the major industries in hiring workers. Besides, there were 7,536 apprentices and  494 Persons with Disabilities (PWD) successfully secured jobs through this programme. Moreover, a total of 136,927 individuals had been approved to participate in Reskilling and Upskilling Programme offered by various ministries and agencies with the intent to enhance capacity and capability for employability.

As for the PENJANA SME Financing, a total of 6,973 SME applications had been approved with a total loan value of RM1.32 billion to empower the SMEs’ businesses. Under the PENJANA Tourism Financing there were 579 applications with 282 approved financing applications amounting to RM57.1 million. In addition, through the PENJANA Micro Credit Financing under Bank Simpanan Nasional (BSN),  11,708 Micro SMEs had benefited with a total distribution value of RM391.9 million. In the meantime, to assist Bumiputera SMEs who were affected by the pandemic, a total of RM182.8 million through the Bumiputera Relief Financing (BRF) was disseminated to 671 SMEs.

Furthermore, to continue supporting the businesses through the SMEs Soft Loans funds, there were 24,628 SMEs assisted involving RM11.63 billion. This value comprised of Special Relief Facility (SRF), Automation & Digitalisation Facility (ADF), All-Economic Sector Facility (AES) and Agrofood Facility (AF) funds. Moreover, to support the Agriculture and Food Industry, under the Agrobank Micro Credit Financing, a total of RM85.1 million had been channelled to 7,723 Agricultural Micro SMEs. Furthermore, to support the SMEs and Mid-Tier Companies (MTCs), 8,584 businesses were benefited through the grants and loans for subscription to digitalisation services involving RM38.7 million under the Technical and Digital Utilisation support initiative.

Therefore, with a continuous and various supports through the government’s initiatives, the labour market may sustain its recovery momentum and subsequently may lead the labour market to be on a right track towards a sustainable path.

This situation coupled with the resumption of more economic activities since February 2021 might encourage more demand in economy and consequently would contribute to a positive impact in the labour market. In line with this, there will be more job opportunities as more labour would be needed to support the business operations.

In addition, starting on 10 March 2021 the domestic tourism activities were allowed within the green zone states albeit with certain restrictions imposed. The travelling activities between RMCO states must hire a registered tour agency and need to obtain an approval from the police prior to travel. These efforts were aimed to help the domestic tourism related activities to recover.

On 17 March 2021, the government launched a new stimulus package namely Strategic Programme to Empower the People and Economy (PEMERKASA). The RM20.0 billion initiative is focused to restore and empower the economy based on five focus areas encompassing to control the spread of COVID 19; to accelerate economic recovery; to strengthen the country’s competitiveness; to implement the regional and community inclusion agenda; and to transform the economy. Among the initiatives that could assist labour market recovery are a RM1,000 PRIHATIN Special Grant 3.0 to the micro and SME businesses and RM700 millions of Wage Subsidy 3.0 targeted towards 400,000 employees and 37,000 employers. In addition, the PEMERKASA package also emphasised on rejuvenating the domestic tourism by extending the exemption for tourism tax and services tax for hotel accommodation. To support cash flow, companies in the tourism related industries also were allowed to delay their payment for monthly income tax for the period of April until December 2021.

Overall, with the continuous economic recovery path and the subsequent positive impact to labour market improvement, it is foreseen that the labour demand may continue to expand marginally and the labour supply will remain competitive.

The full publication of the Labour Force Report, February 2021 can be downloaded through eStatistik Portal. Free Download

For more details, please refer to the Department’s portal: www.dosm.gov.my