Key Statistics of Labour Force in Malaysia, May 2021 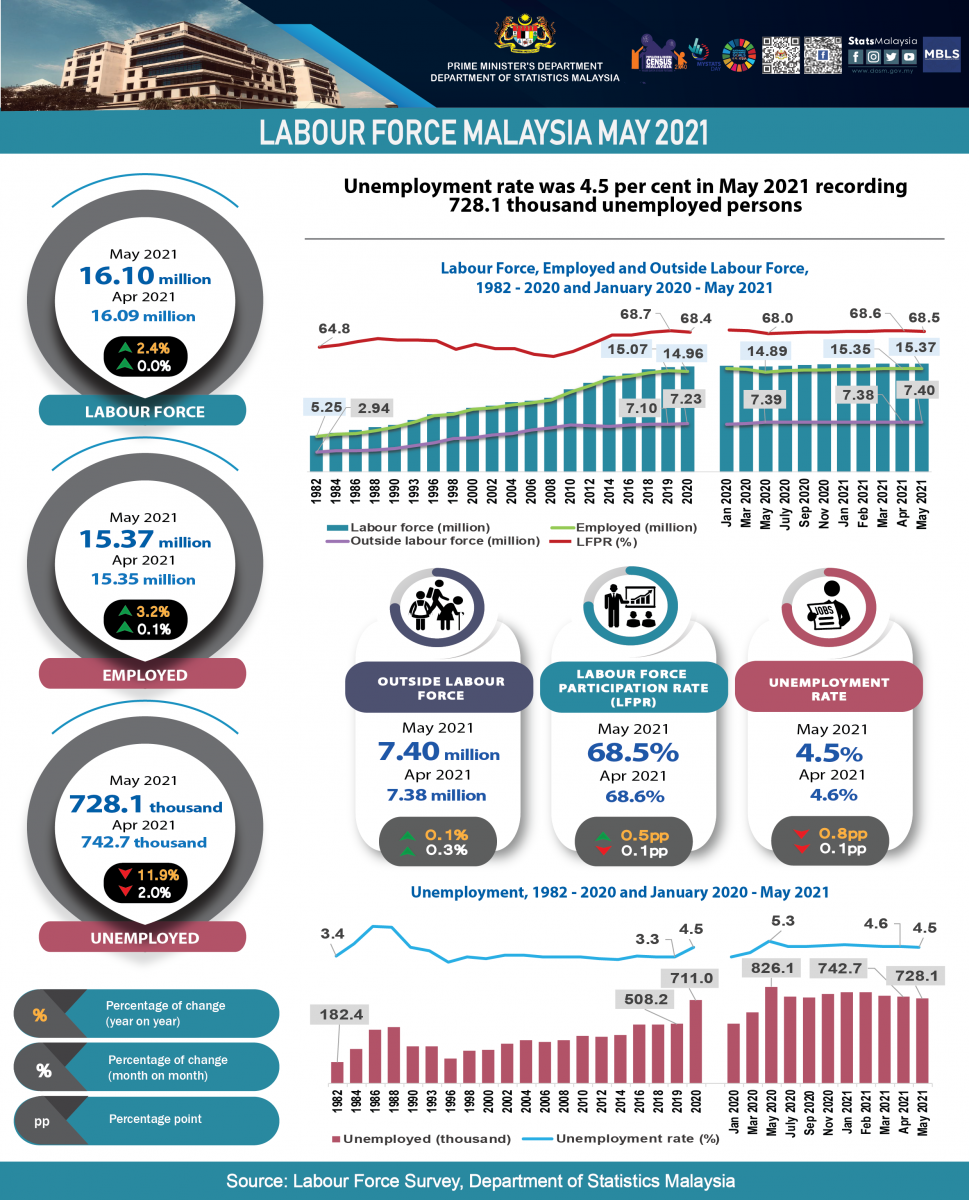 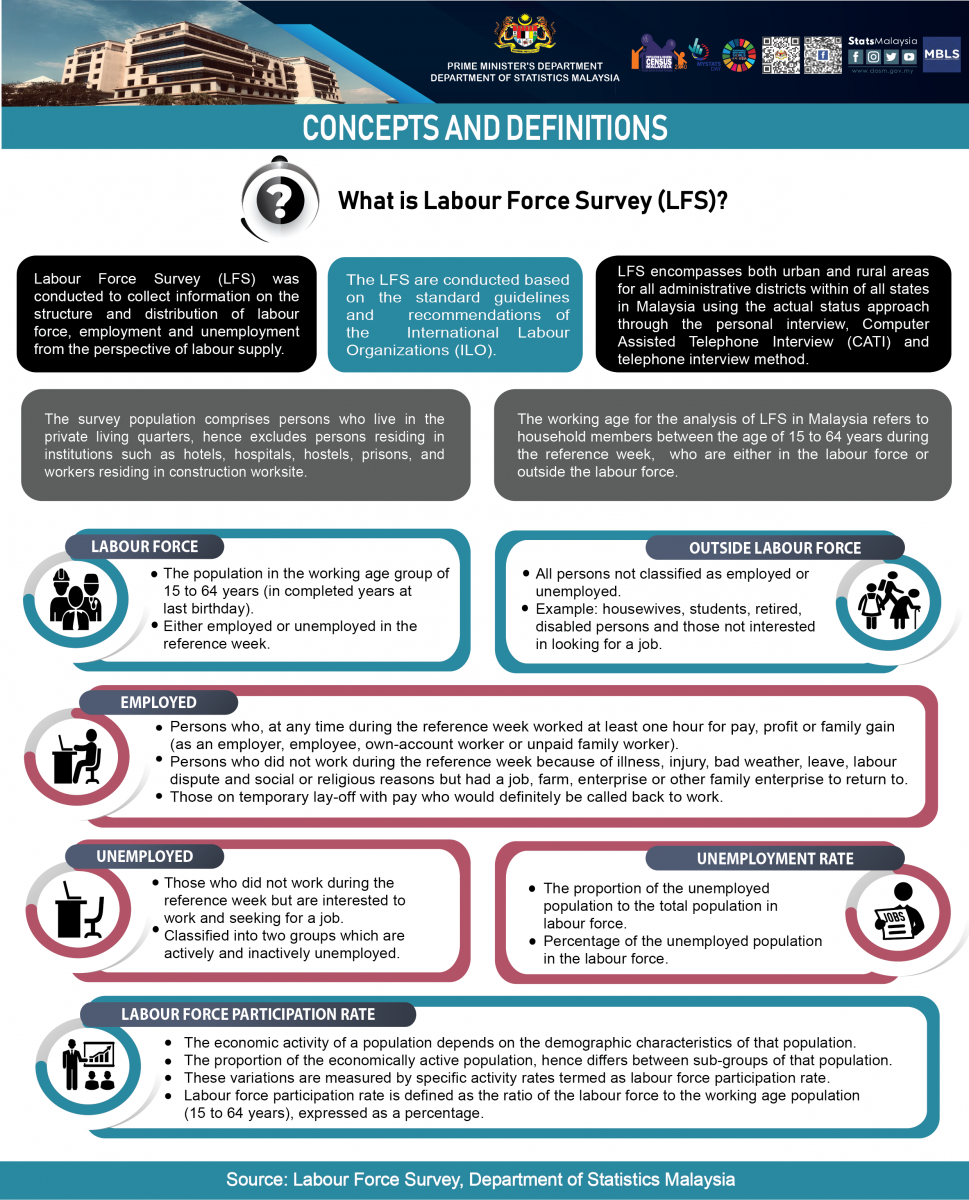 Early May 2021, economic activities including bazaar and micro businesses continued to operate in adherence to standard operating procedures (SOP). Nevertheless, beginning mid of the month, another wave of COVID-19 was observed in the country as new daily infections reached 6,000 cases. In response to this, the Movement Control Order (MCO) were implemented in a few states since 3 May; namely Kuala Lumpur, Pulau Pinang, Selangor, Johor and Sarawak. Particularly in Kelantan, the restrictions were extended from 29 April to 17 May 2021. During this period, educational institutions were closed, while social and religious gathering activities were prohibited.

MCO which was implemented nationwide since 12 May has become more strict beginning on 25 May. The tightened standard operating procedures (SOP) includes limited visiting hours for shoppers, in addition to shortened operating hours for shopping malls and eateries. During this period, most economic activities were still allowed to operate with restrictions to inter-state and inter-district travelling, as well as dine-in for eateries. Meanwhile, social visits were not allowed during the Eid festival which fell in mid-May following travel and social gathering restrictions.

Looking at the labour force performance in May 2021, the labour for situation improved with a marginal increased in the number of employed persons and lower unemployment rate. Furthermore, the performance of the Malaysia’s Leading Index (LI) for April 2021 continued to post a double-digit growth of 15.7 per cent year-on-year which also demonstrated an improve business stance (March 2021:  17.2 per cent). The LI foresees improved economic performance if the pandemic subsides. Meanwhile, the monthly indicators of exports and imports posted negative month-on-month growths of 12.6 per cent and 7.8 per cent respectively.

The Labour Force Report for May 2021 describes the labour supply situation as the country entered the fifteenth month of various MCO phases. The report will elaborate on the month-on-month changes to examine the immediate effects of the MCO to contain the spread of COVID-19. Users are advised to interpret the monthly statistics with caution since they are non-seasonally adjusted. In addition, annual changes from the same month of the previous year are also reported.

Employed persons increased marginally in May 2021

In May 2021, the employment-to-population ratio which indicates the ability of an economy to create employment stood at 65.4 per cent. Nevertheless, year-on-year basis, the ratio up by  1.0 percentage point from 64.4 per cent (May 2020). [Chart 1]

Employee’s category which made up the largest composition of employed persons at 77.9 per cent, improved by 0.6 per cent month-on-month to 11.98 million persons (April 2021:  11.96 million persons). Likewise, own-account workers continued to increase for four consecutive months by 2.4 thousand persons to 2.49 million persons in May 2021 (April 2021: 2.49 million persons). The addition of employed person in this category was partly due to the permission of economic sector to continue their businesses during the MCO in order to ensure sustainability of small businesses. This group comprised mostly of daily income earners working as small business operators such as small retailers; hawkers; sellers in markets and stalls as well as smallholders. [Chart 2]

Chart 2: Employed person by status of employment, April and May 2021

Unemployment rate was slightly lower in May 2021 at 4.5 per cent

The unemployment rate was slightly lower in May 2021 by 0.1 percentage point to 4.5 per cent as against 4.6 per cent in April 2021. Accordingly, fewer number of unemployed persons were registered at 728.1 thousand persons or by negative 2.0 per cent (April 2021: 742.7 thousand persons) and it was on a downward trend since February 2021.

Chart 4: Unemployed category and duration of unemployment, April and May 2021

Housework/ family responsibilities was the major category of outside labour force

Chart 8: Share of outside labour force by reasons for not seeking work, April and May 2021

As of 18 June 2021, the approved wage subsidy applications under PRIHATIN and PENJANA have reached a value of RM12.90 billion through Wage Subsidy Programme (PSU) 1.0 from  322,177 employers and 2.64 million registered employees. Subsequently, for the Wage Subsidy Programme (PSU) 2.0, a total of RM1.28 billion has been disbursed to 75,262 employers to continue to operate and retain employment for 659,066 employees. Additionally, a total of 137,659 employees had secured employment through the Hiring Incentive Programme and Training Assistance whereby the most common industries were the Manufacturing and Wholesale and retail trade. Moreover, a total of  143,309 persons had been approved to take part in Reskilling and Upskilling Programme.

Meanwhile, through soft loans funds by Bank Negara Malaysia (BNM), a total of RM12.14 billion of soft loan fund has been approved by local banks which benefited 25,711 SMEs comprising of Special Relief Facility (SRF), Automation & Digitalisation Facility (ADF), All-Economic Sector Facility (AES) and Agrofood Facility (AF) funds. In addition, under PENJANA Tourism Financing, RM600 million has been allocated for the affected SMEs and micro-SMEs by the COVID-19 pandemic involving 671 applications with  332 applications were approved totalling RM66.1 million. Next, to assist Bumiputera SMEs affected by  COVID-19, a total of RM226.8 million had been disbursed to 749 SMEs under the Bumiputera Relief Financing (BRF). In the meantime, through the PENJANA Micro Credit Financing, there were 12,667 Micro SMEs including in the Retail and Services sectors had been benefitted involving RM421.2 million.

A total of RM71.3 million was distributed to 13,872 businesses in the form of grants and loans for digitalisation services subscriptions to support the Technical and Digital Mid-tier Companies (MTCs) and Digital Adaption. Additionally, through the CENDANA initiative which aims to support the Arts, Culture and Entertainment activities, 519 recipients including artists, collectives and organisations which were actively involved in the Malaysian arts and culture industry had been benefitted with a total value of RM4.09 million.

Therefore, with the continuous implementations of various government’s initiatives focusing on each layer of the targeted group, it is hoped that labour market momentum will recover in the upcoming months despite the massive shift caused by the COVID-19 pandemic to the labour market in the previous year.

As the country entered the second half of year 2021, the Full Movement Control Order (FMCO) or 'total lockdown' were implemented in order to flatten the COVID-19 infection curve resulting in a nationwide shutdown of all social and economic sectors except those deemed as an essential economic and services sector with limited number of employees at sites. With the latest health-containment measures, the economic sectors are anticipated to face challenges in maintaining their recovery momentum while tourism-related industries may continue to be impacted.

With new daily infections were persistently above 6,000 cases towards the end of June 2021, the Enhanced MCO (EMCO) has been implemented in certain localities in Kuala Lumpur and Selangor starting from 3 to 16 July onwards in mitigating the spike of new cases in those areas. Consequently, the labour market may be facing uneven situation in the ensuing months depending on the stage of the pandemic.

However, efforts are underway to ensure more people are vaccinated under the National COVID-19 Vaccination Programme to guarantee that the country reach the objective of herd immunity by the end of the year. Moreover, the Malaysia's National Recovery Plan (NRP) has been announced on 15 June 2021, which comprised of four (4) phases of the exit strategy from the COVID-19 crisis, whereby the country will be moved into the second phases when the daily COVID-19 cases were below than 4,000 cases. A few states namely Kelantan, Terengganu, Pahang, Perak dan Perlis have entered the Phase 2 of NRP starting on 5 July onwards due to improving conditions with more economic activities allowed and less restrictions will be implemented. Furthermore, various initiatives were introduced under the Pakej Perlindungan Rakyat dan Pemulihan Ekonomi (PEMULIH) to support businesses and sustain employees in the labour market such as Prihatin Special Grants (GKP) 4.0 to the eligible micro SME entrepreneurs especially to those who were still not allowed to operate, Wage Subsidy Programme (PSU) 4.0 to aid the employers to pay their employees’ salaries, the exemption of HRD Corp levies for a period of two months will be automatically assigned to employers who were unable to operate during MCO, Program Pemerkasaan Pendigitalan Usahawan Kecil (PUPUK), PenjanaKerjaya 3.0 and others. Therefore, it is hoped that these measures will help the economic activities to gain its recovery momentum, thereby sustaining the labour market situation in the forthcoming months.

Seasonally adjusted
Malaysian economic time series data are affected by major religious festivals such as the Eid-ul Fitr, the Chinese New Year and the Deepavali. The major festivals in this country are usually related to the religious activities and such as, the dates are determined by the respective religious calendar. The dates of these holidays are not in line with the Gregorian calendar. Hence, they tend to move along the Gregorian calendar and has strong seasonal influence on many economic time series data.
Since these non-fixed holidays have large impact on the time series data, they need to be taken into account when performing seasonal adjustment process so as to avoid confusion in seasonally adjusted data and trend estimates. Furthermore, the presence of the non-fixed holidays effects may complicate the interpretation of the data.
Seasonal adjustment is a process of removing the estimated effects of normal seasonal variation from the original series so that the effects of other influences on the series may be more clearly recognized.
Seasonal adjustment can be derived by various methods and the results may vary according to the procedure adopted. The approach used for seasonal adjustment in Malaysia is the  Seasonal Adjustment for Malaysia (SEAM).
SEAM is a procedure to remove moving holiday effect on the selected Malaysian economic time series data by introducing steps that can be used to overcome the limitations of the existing seasonal adjustment procedure. To apply the SEAM procedure, the X-ARIMA program in Statistical Analysis Software (SAS) is used.
This seasonal adjusted rate will be revised when a complete 12 months time series for the particular year are obtained.
Population Benchmarks

The full publication of the Labour Force Report, May 2021. This report is accessible and downloadable through the application eStatistik Portal, Free Download

For more details, please refer to the Department’s portal: www.dosm.gov.my