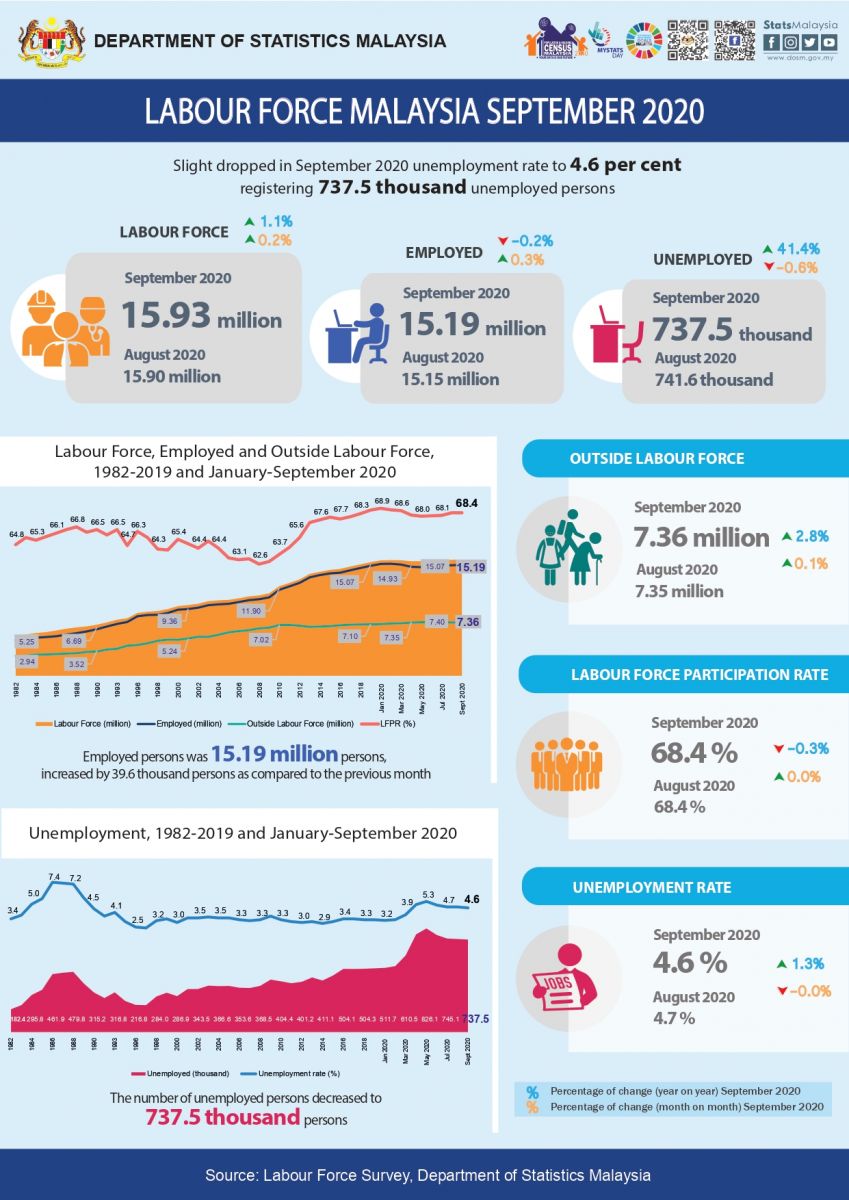 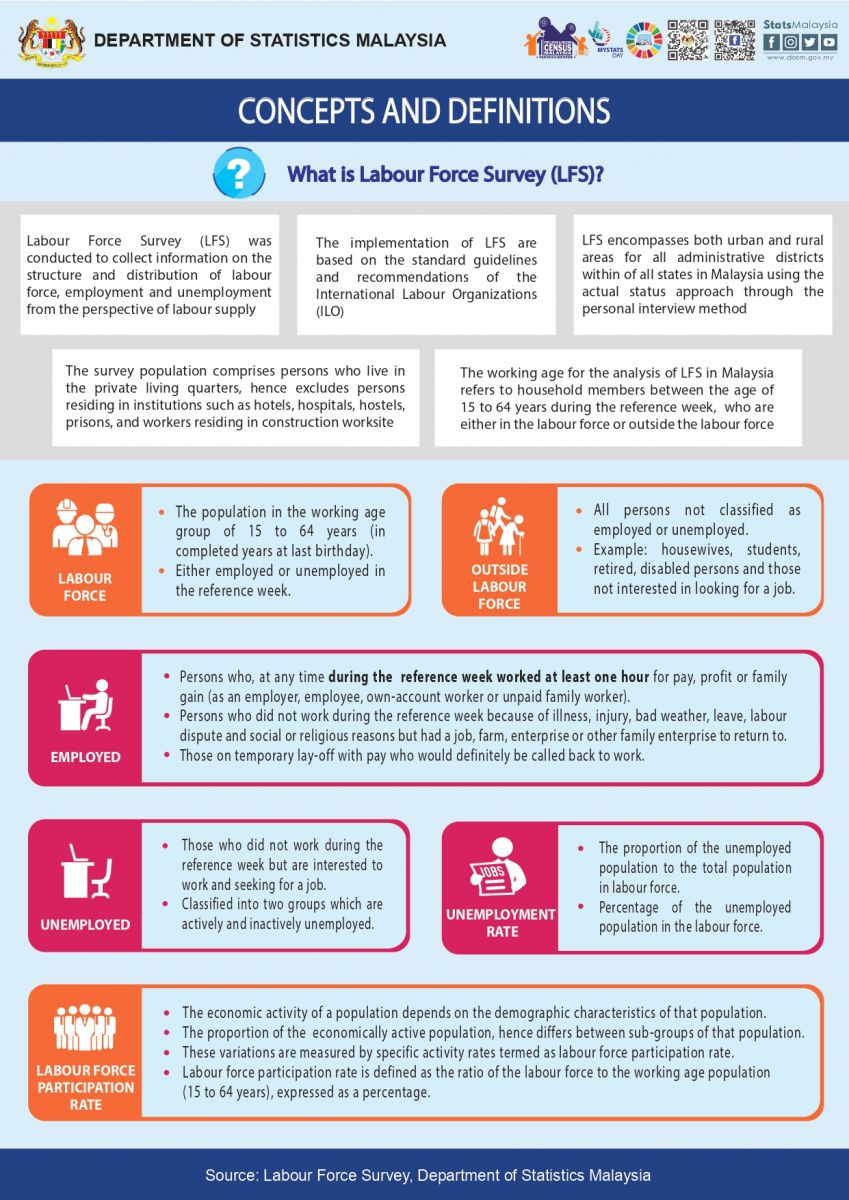 SLIGHT INCREASE IN THE MALAYSIA’S LABOUR FORCE IN SEPTEMBER 2020


The country had undergone seven months of Movement Control Order (MCO) to contain the spread of  COVID-19 pandemic. Since 10 June 2020, the Recovery MCO allowed more economic sectors to operate although businesses were not operating at optimum level. In the meantime, various stimulus packages provided by the Government were aided to cushion the negative impact of the pandemic to the economy including labour market. Thus, continuous improvement albeit at a moderate pace was observed in labour force situation. This has reflected by the positive month-on-month growth in employment since June 2020, as well as by the unemployment rate which showed a declining trend. Hence, the recovery of labour force situation may continue unless there is another wave of COVID-19 new cases impacting business activity and consumer demand.

In September 2020, it was reported that the number of new cases began to rise again for several administrative districts mainly in Kedah and Sabah. Consequently, Administrative Enhanced MCO had been implemented in these areas and had successfully curbed the spread while mitigated the negative impact to the labour market. As a result, the number of labour force during the month continued to increase with a marginal growth.

Based on the economic performance in September 2020, the Industrial Production Index (IPI) posted a positive growth of 0.5 per cent month-on-month to record 115.3 supported by IPI for Manufacturing which was increased by 2.1 per cent. In addition, the total export recorded a double-digit month-on-month growth  of 13.6 per cent, while import declined by 3.6 per cent.

The Labour Force Report for September 2020 describes the labour supply situation as the country entered the seventh month of MCO. The report will elaborate on the month-on-month changes to examine the immediate effects of the MCO to contain the spread of COVID-19. Users are advised to interpret the monthly statistics with caution since they are non-seasonally adjusted. In addition, annual changes from the same month of the previous year is also reported.

Additionally, for the first time, new quarterly indicators on working of less than 30 hours per week and underemployment are introduced in the report to provide more insight on the country’s labour supply situation. In this report, the underemployment indicators were measured in the form of time-related and  skill-related. Time-related underemployment is defined as those who were employed less than 30 hours per week due to the nature of their work or because of insufficient work and were able and willing to accept additional hours of work. Meanwhile, skill-related underemployment which was generally defined as those who wanted to change their current employment situation in order to use their occupational skills more fully and were available to do so, is measured as those with tertiary education working in semi-skilled and low-skilled occupations.

A box article on Assessment of Underemployment Situation in Malaysia which has been published in Malaysia Economic Statistical Review (MESR) Vol. 6/2020 is also included in this report to assist users in understanding the underemployment statistics.

Services and Manufacturing sectors which were the main contributors of the economy, recorded an increase in the number of employment as against the previous month. For Services sector, the increase was largely in wholesale & retail trade and accommodation and food & beverages as well as education activities.

In terms of status of employment, the employee’s category rose by 14.9 thousand persons to record 11.73 million persons as against the previous month. Own-account workers continued to increase by 0.7 per cent to register 2.43 million persons (August 2020: 2.42 million persons). The positive growth of own-account workers may be reflected by the various government initiatives to boost up the businesses such as PENJANA SME Financing which continue to assist the Small Medium Enterprises (SMEs) as well as a Special Grant of RM3,000 to each eligible micro-SME. [Chart 2]

Chart 2: Employed person by status in employment, August and September 2020

In the meantime, there were 100.7 thousand of employed persons who were temporarily not working as against 102.0 thousand persons recorded in August 2020. This group of persons, who were most likely not able to work was not categorised as unemployed as they had work to return to.

For the series of Q1 2017 to Q4 2019, the time-related underemployment averaged of 1.4 per cent from the total of employed persons equivalent to 212.4 thousand persons. The implementation of MCO in the mid of March 2020 has caused the number increased further to 383.2 thousand persons (2.5%) in Q1 2020. Subsequently, the continuous phases of MCO and several economic activities were allowed to operate with strict standard operating procedures in Q2 2020, had led to the increase in time-related underemployment to 413.5 thousand persons (2.8%). Nevertheless, the number reduced to 300.8 thousand persons (2.0%) in Q3 2020 following the implementation of Recovery MCO with longer business operation hour during the period. [Chart A1]

Unemployment rate dropped to 4.6 per cent in September 2020

Meanwhile, persons who were in long-term unemployment for more than a year accounted for  58.0 thousand persons or 9.5 per cent. However, the inactively unemployed or discouraged group whom believed there were no jobs available during the month registered an increase of 0.1 percentage points to record 127.1 thousand persons as against 126.5 thousand persons in August 2020. [Chart 4]

Chart 4: Unemployed category and duration of unemployment, August and September 2020

LFPR remained at 68.4 per cent

The labour force participation rate remained at 68.4 per cent in September 2020 after recorded an increase of 0.3 percentage points in the previous month. During the month, the number of labour force increased by 35.5 thousand persons month-on-month to 15.93 million persons  (August 2020: 15.90 million persons).

Comparing with the same month of the previous year, the number of labour force rose by  179.4 thousand persons from 15.75 million persons while the LFPR declined by 0.3 percentage points (September 2019: 68.7%). [Chart 6]

In the meantime, both male and female LFPR remained at 80.6 per cent and 55.2 per cent respectively.  It was observed that the number of the male labour force increased 18.3 thousand persons to record 9.74 million persons. Meanwhile, the number of female labour force was 6.20 million persons, increased 17.2 thousand persons from August 2020. Year-on-year, both male and female LFPR dropped by 0.3 and 0.5 percentage points respectively. [Chart 7]

In September 2020, the number of persons outside labour force increased slightly by  8.3 thousand persons to record 7.36 million persons as against August 2020. Meanwhile,  year-on-year, outside labour force rose by 2.8 per cent (+200.0 thousand persons) as compared to September 2019. Housework/ family responsibility contributed 45.1 per cent followed by schooling/ training with 40.2 per cent. [Chart 8]

Chart 8: Share of outside labour force by reasons for not seeking work, August and September 2020

The KITA PRIHATIN Economic Stimulus Package, which prioritised three direct-assistance initiatives namely, Bantuan Prihatin Nasional 2.0 (BPN 2.0), Wage Subsidy Programme 2.0, and PRIHATIN Special Grant (GKP) announced by the government were aimed to benefit the nation. Apart from this package, the government approved an additional allocation of RM11.93 billion under the Wage Subsidy Programme as of 25 September 2020 targeted to aid over 2.6 million employees as well as 321,633 employers. Furthermore, a total of 43,998 employees earned jobs, comprising of 284 persons with disabilities and 3,782 apprentices through the Hiring Incentive Programme and Training Assistance.

The Reskilling and Upskilling Programme also were implemented to provide the workforce to satisfy the demand of the industry while boosting employment opportunities. In the meantime, 11,383 micro, small, and medium-sized enterprises benefited from TEKUN Business Recovery Scheme amounted to  RM75.5 million. The PENJANA SME Financing (PSF) were also given to the eligible SMEs to assist the SMEs who are adversely impacted by COVID-19 in order to sustain business operations. In addition, the SME Soft Loans Funds as supervised by Bank Negara Malaysia (BNM), supplied facilities to 22,984 SMEs amounting to RM10.7 billion, thereby supporting the recovery of the labour market in September 2020.

Although the COVID-19 pandemic continued to be a difficult challenge in September 2020, the Malaysia’s labour force situation was further improved as the progress of the economic sector continued to grow. However, looking at the current situation with a spike of new COVID-19 cases especially in certain parts of the nation beginning at the end of September 2020, it is foreseen some challenges will be faced by the labour market in the forthcoming months.

Hence, the government has taken proactive measures among others by introducing Bantuan Prihatin Nasional 2.0 (BPN 2.0) amounted to RM10 billion in September this year. In addition, to mitigate the effects of this pandemic towards graduates, the Higher Education Ministry (KPT) had introduced the Graduates Reference Hub for Employment and Training (GREaT) to offer services on jobs matching and reskilling & upskilling programmes as well as in providing assistance to those who need to pursue tertiary education through PENJANA Career Advancement Programme (PENJANA KPT-CAP).

Meanwhile, the Global Online Workforce Programme (GLOW) works with international and local platform partners to reinforce the supporting ecosystem for GIG employees, thus assuring Malaysian freelancers to bid for jobs and projects in a safe and secure digital environment. Overall, these  government-implemented policies and programmes may contribute to the stabilisation and recovery of the Malaysia’s labour market.