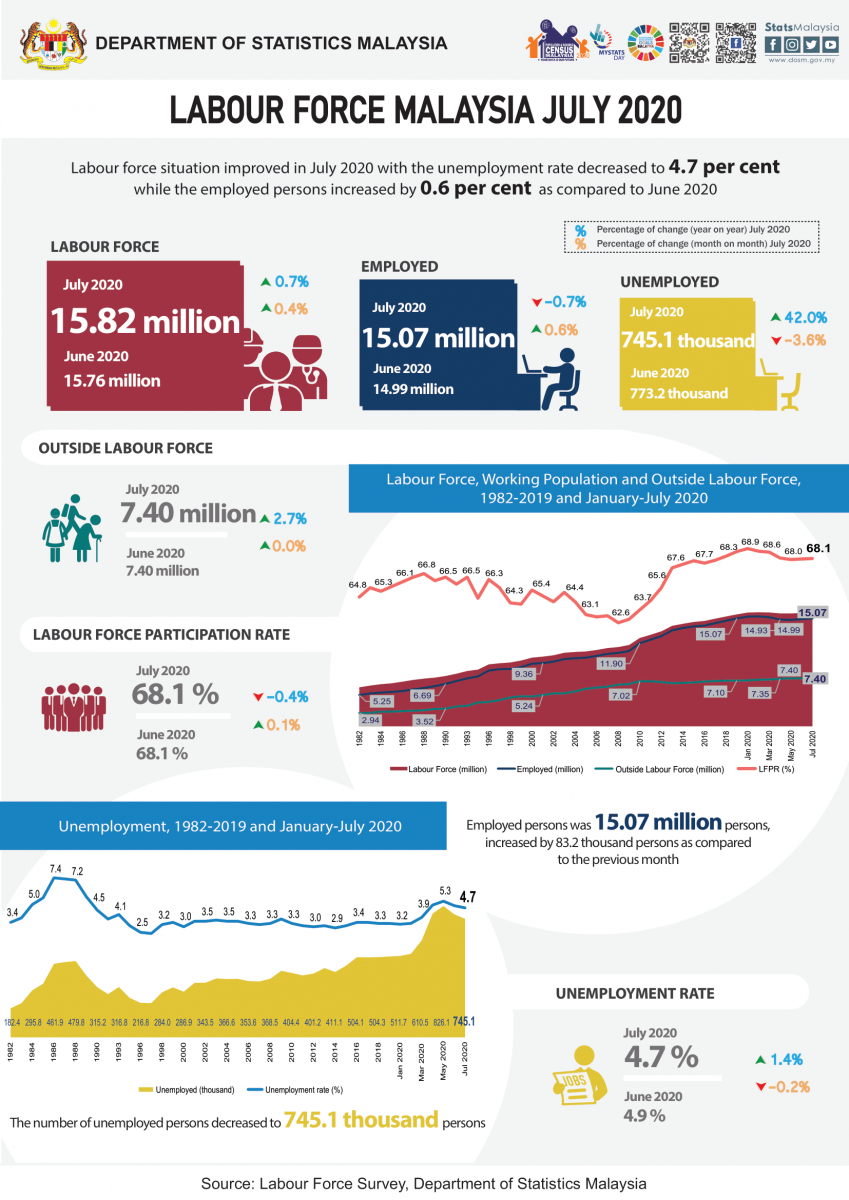 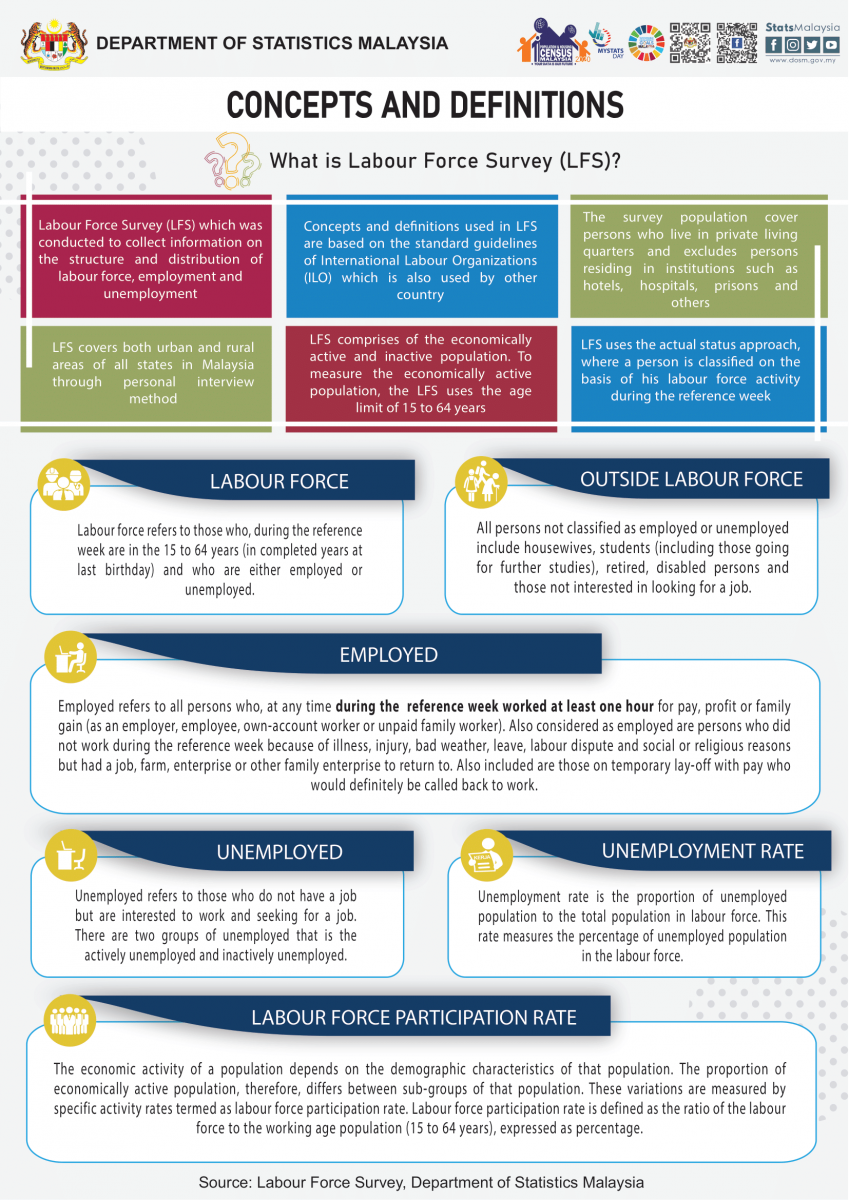 LABOUR FORCE SITUATION CONTINUED TO IMPROVE DURING THE RMCO PHASE

The RMCO implemented since 10 June 2020 had allowed more economic sectors to resume. As the country move to a recovery stage with low number of new COVID-19 cases in July 2020, the education sector was allowed to reopen for students to return to schools and learning institutions. Hence, in mid July 2020, the education sector began reopening in stages resulting in positive impact on related activities such as school bus services, school canteens and tuition centres. In addition, university and college students were allowed to return to their campuses and higher learning institutions are expected to be fully reopen by October 2020. At the same time, childcare centres started to operate early July 2020, allowing more parents to return to work.

During the month, it was also observed that there were more travelling activities following the Aidiladha and the school holiday. Many took the opportunity to travel within the country after tourism activities came to a halt in the previous stage of the MCO. Subsequently, there were more demand in accommodation, food & beverages and entertainment & arts, recreational services which encourage businesses to retain or even to increase job opportunities. In other words, the resumption of economic activities had resulted in revival of the labour force situation.

The Labour Force Report for July 2020 describes the labour supply situation as the country entered the second month of RMCO. The report will elaborate on the year-on-year changes in addition to the short-term changes from the previous month to examine the immediate effects of the MCO to contain the spread of COVID-19. Users are advised to interpret the monthly statistics with caution since they are non-seasonally adjusted.

Most economic sectors posted an increase in employed persons since June 2020 as the first month of RMCO took effect. The significant increase was in the Services sector mainly in accommodation, food & beverages and transport & storage activities. There was also slight increase in art, entertainment & recreational activities.

In term of status in employment, own-account workers decreased by 36.9 thousand month-on-month to 2.38 million persons in July 2020. This group which continued to decline since April 2020, comprised mostly of daily wage earners working in farmers’ markets, night markets and stalls; freelancers; as well as smallholders. They were the most affected group due to COVID-19 pandemic. [Chart 2]

Chart 2: Employed person by status in employment, June and July 2020

During the month, there were only 104.3 thousand employed persons who were temporarily not working as compared to 908.9 thousand persons in June 2020. This group of persons, who were most likely not able to work was not categorised as unemployed as they had work to return to. The decline in the total number of employed persons who were temporarily not working among others was due to the positive effect of the resumption of the education sector such as schools, pre-schools, childcare centres, tuition centres and private colleges as well as other activities namely cafeterias/ canteens.

Meanwhile, the inactively unemployed or discouraged group whom believed there were no jobs available lessened by 30.3 per cent (-54.3 thousand persons) to 124.9 thousand persons in July 2020. [Chart 4]

Chart 4: Unemployed category and duration of unemployment, June and July 2020

LFPR remained at 68.1 per cent

As the permission to operate extended to more sectors including tourism, education, entertainment & recreational activities, the total labour force grew by 55.0 thousand persons to 15.82 million persons compared to June 2020. Year-on-year, labour force registered an increase of 113.9 thousand persons (0.7%) from 15.70 million persons (July 2019). The LFPR in July 2020 remained at 68.1 per cent. However, it was lower by 0.4 percentage points as against the same month of the previous year. [Chart 6]

The male LFPR posted an increase of 0.1 percentage points to 80.4 per cent as against June 2020 (80.3%). During the month, the number of male labour force rose by 42.7 thousand persons to 9.6 million persons. Meanwhile, the female LFPR was unchanged at 55.1 per cent with the number of female labour force increased by 12.3 thousand persons to record 6.2 million persons. Year-on-year comparison, both male and female LFPR dropped 0.4 percentage points from 80.7 per cent and 55.5 per cent respectively. [Chart 7]

In July 2020, outside labour force increased slightly by 0.02 per cent (+1.3 thousand persons) to 7.40 million persons while year-on-year rose 2.7 per cent (+192.1 thousand persons). The largest share of outside labour force was due to housework/ family responsibility with 45.4 per cent, followed by schooling with a share of 38.4 per cent. [Chart 8]

Chart 8: Share of outside labour force by reasons for not seeking work, June and July 2020

Apart from the stimulus packages of PRIHATIN, PRIHATIN Plus and Short-Term Economic Recovery Plan (PENJANA) introduced by the government, an additional of RM5.3 billion was allocated by the government for the Wage Subsidy Programme extension. This package covered wage subsidies, reskilling and upskilling programmes, hiring and training assistance as well as gig economy social protection which led to recovery of the labour market since June 2020.

According to the Ministry of Finance Malaysia, as of 24 July 2020, a total of 7,543 employees gained jobs including 66 persons with disabilities and 963 apprentices through the Hiring Incentive Programme (PenjanaKerjaya). In addition, Wage Subsidy Programme aided over 2.6 million employees as at end of July through an approved allocation of RM8.99 billion to 318,258 employers. Meanwhile, a total of RM6.8 million has been disbursed to Tekun Business Recovery Scheme which would be beneficial to 900 micro, small, and medium enterprises.

Malaysia’s economy is showing signs of gradual recovery in the upcoming months, unless there is another spike in COVID-19 cases. As the economic activities reopened continuously coupled with more travelling activity, domestic demand may uplift and subsequently increase jobs opportunities. In line with this, labour market is foreseen to revive as employment picks up its pace while unemployment continues to fall. In the second half of the year, potential labour supply will enter the labour market, particularly new graduates. This would impact the jobseekers as the labour market is becoming more competitive for traditional jobs. Thus, new emerging job opportunities largely driven by technology advancement and automation could be alternatives for the new graduates. Optimistically, the new entrants in the labour market who leverage such opportunities may in turn become job creators for others.

As the pandemic continues to change the economic landscape, the business models continued to be reinvented; subsequently causing shift in job trends. In relation to this, the government initiatives on strategic investments may become a catalyst of innovation to encourage the use of technology in cross-sectoral businesses. Among others, an allocation of RM25 million for the Global Online Workforce (GLOW) Programme which aims to provide training for income generation through an online platform. In addition, the government’s initiatives for reskilling, upskilling and cross-skilling programmes provided by various agencies will give positive impact by preparing future workforce with the most in-demand skills.