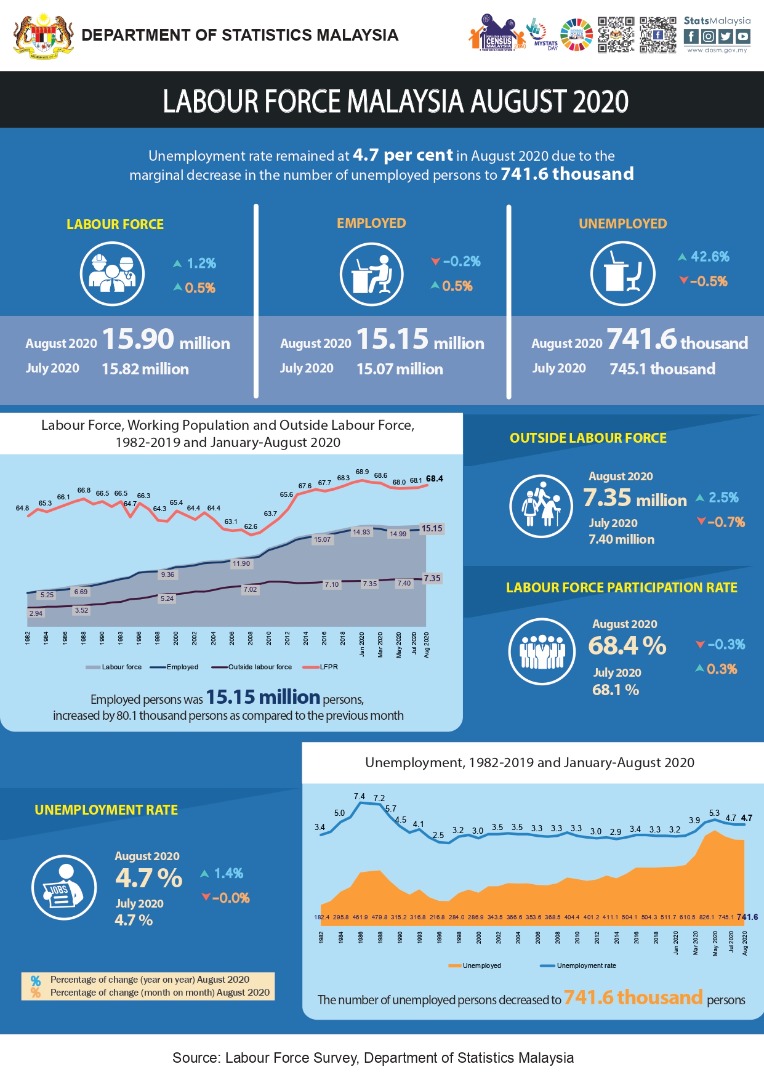 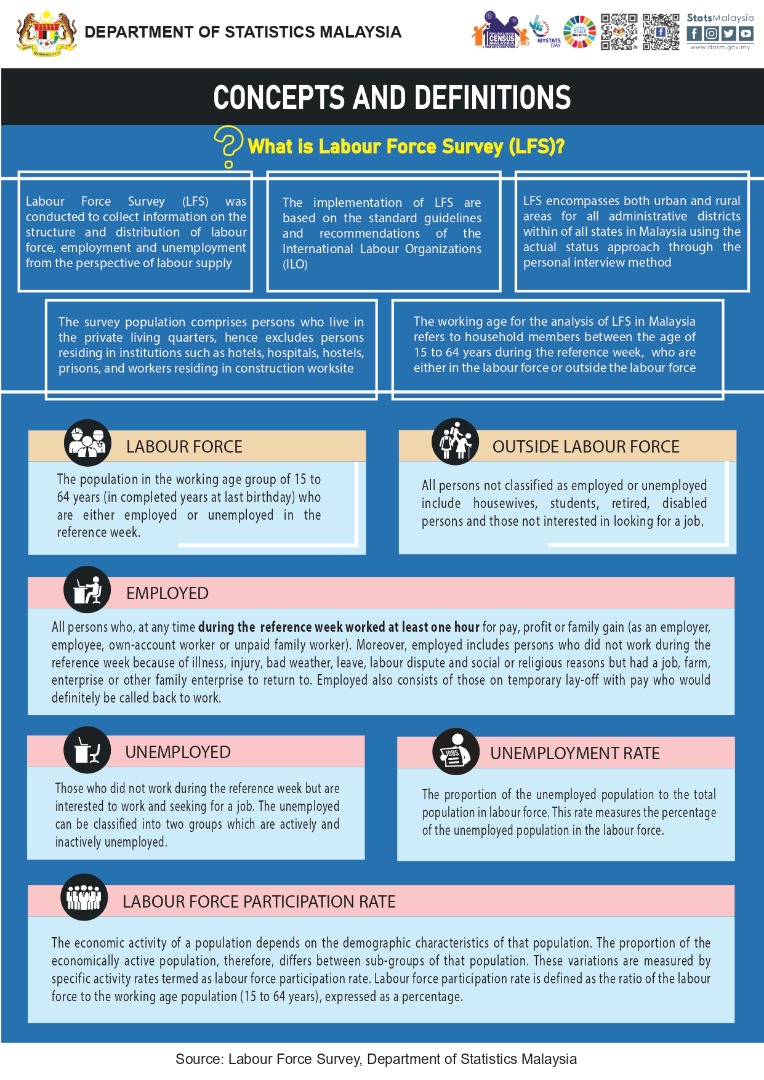 
The Government has driven the country in fighting the COVID-19 pandemic by implementing six key steps: Resolve, Resilience, Restart, Recovery, Revitalize and Reform. The first three stages have passed and now the country was in the Recovery stage which focused on completing the journey from Restart to Recovery by launching strategic initiatives to drive the economic growth1. During this stage, the labour force situation improved further following the continued resumption of economic activities after being hit by the unprecedented event.

In August 2020, the lifting up of restriction led almost all sectors to regain momentum including tourism industry due to higher demand. Hence, businesses related to this industry such as accommodations, food & beverages, transportations & entertainments also has experienced the positive impact. Subsequently, the businesses offered gradual rehiring including for those who were unemployed or laid offs. Allocation of RM1 billion in the PENJANA Tourism Financing Scheme also benefitted the businesses particularly Small and Medium Enterprises (SMEs) as well as micro companies to rejuvenate the tourism industry.             The Labour Force Report for August 2020 describes the labour supply situation as the country entered the third month of RMCO. The report will elaborate on the year-on-year changes in addition to the  short-term changes from the previous month to examine the immediate effects of the MCO to contain the spread of COVID-19. Users are advised to interpret the monthly statistics with caution since they are  non-seasonally adjusted.

Linear growth in employment since RMCO

In August 2020, the number of employment in Services sector increased further largely in wholesale & retail trade; accommodation and food & beverages as well as information & communication activities. Besides, arts, entertainment & recreational activities also went up as compared to the previous month. Meanwhile, manufacturing sector which was the second largest contributor in economy recorded a decreased in employment. During August 2020, the Industrial Production Index for Manufacturing declined 1.9 per cent month-on-month as compared to the marginal growth of 0.2 per cent in the previous month. This slower momentum has impacted a declined of employed person in Manufacturing sector during the month.

Employees category increased 72.6 thousand month-on-month to 11.72 million persons in August 2020. Likewise, own-account workers accounted for 2.42 million persons, increased for the first time since April 2020 (July 2020: 2.38 million persons). The share of own-account workers rose  0.1 percentage points as compared to the previous month, registering 15.9 per cent (July 2020: 15.8%). The Special PRIHATIN Grant of RM3,000 which was introduced in May 2020 has shown a positive outcome in assist them to sustain and return to the labour market. [Chart 2]

Chart 2: Employed person by status in employment, June and August 2020

Unemployment rate remained at 4.7 per cent

Chart 4: Unemployed category and duration of unemployment, June and August 2020

Schooling contributed the largest share of outside labour force

Chart 8: Share of outside labour force by reasons for not seeking work, June and August 2020

Various initiatives have been formulated by the Government to stabilise the labour market. Among others, a total of RM10.38 billion has been approved under Wage Subsidy Programme which benefited more than 2.62 million employees and involves 320,440 employers as at 28 August 2020. Furthermore, for the second initiative, the Hiring Incentive and Training Assistance Programme involved 24,616 persons including 177 Persons with Disabilities and 2,818 apprentices. In addition, the Skills and Upskilling Programmes which involved several Ministries and agencies has been introduced to provide reskilling and upskilling programmes to participants to ensure that they can meet the needs and demand of the market. As for the TEKUN Business Recovery Scheme (TBRS) which aim to increase access to financing in recovering SMEs short-term cash flow burden, a total of RM 47.7 million was channelled to 6,908 SMEs.

To support the business community to continue to survive and operate during pandemic COVID-19 situation, the government also has given an electricity bill discount of RM181.7 million to 1.4 million companies from the commercial sector, representing 17 percent of the total electricity discount as at  31 August 2020. In addition, the government through Bank Negara Malaysia provides the Facility of the SMEs Soft Loans Funds to the 22,440 SMEs amounted to RM10.3 billion during this pandemic. Hence, it contributes to the improvement of the labour force situation in August 2020.

As the economic sector continues reopening, August 2020 saw the Malaysia’s labour force situation improved further. Nevertheless, looking at the current situation where the COVID-19 cases is on the increasing trend, it is foreseen that some challenges will hinder the labour market recovery in the upcoming months and could impact the potential of labour force to enter the labour market.

In these regards, the multiple initiatives by the Government are expected to cushion the impact of unprecedented event and consequently retain the jobs. To support the recovery of the economy, the Government through the Short-Term Economic Recovery Plan (PENJANA) provides several initiatives to ensure the welfare of the people and employees are preserved.

Among the initiatives is the PENJANA GIG which focusing on the social security for GIG workers, the Global Online Workforce Programme (GLOW), which initiate new career opportunities, by supervising the digital freelancers to offer their expertise and services globally through existing digital platforms as well as reskilling, upskilling and cross-skilling programmes. The initiatives and programmes by the Government, will lead the Malaysian labour market to remain stable and regain its momentum.