MYCENSUS 2020 RECORDED POPULATION OF 32.4 MILLION PERSONS TO BECOME A NEW BENCHMARK (BASELINE) TO DRIVE THE NATIONAL SOCIO-ECONOMIC PLANNING AND PROSPERITY 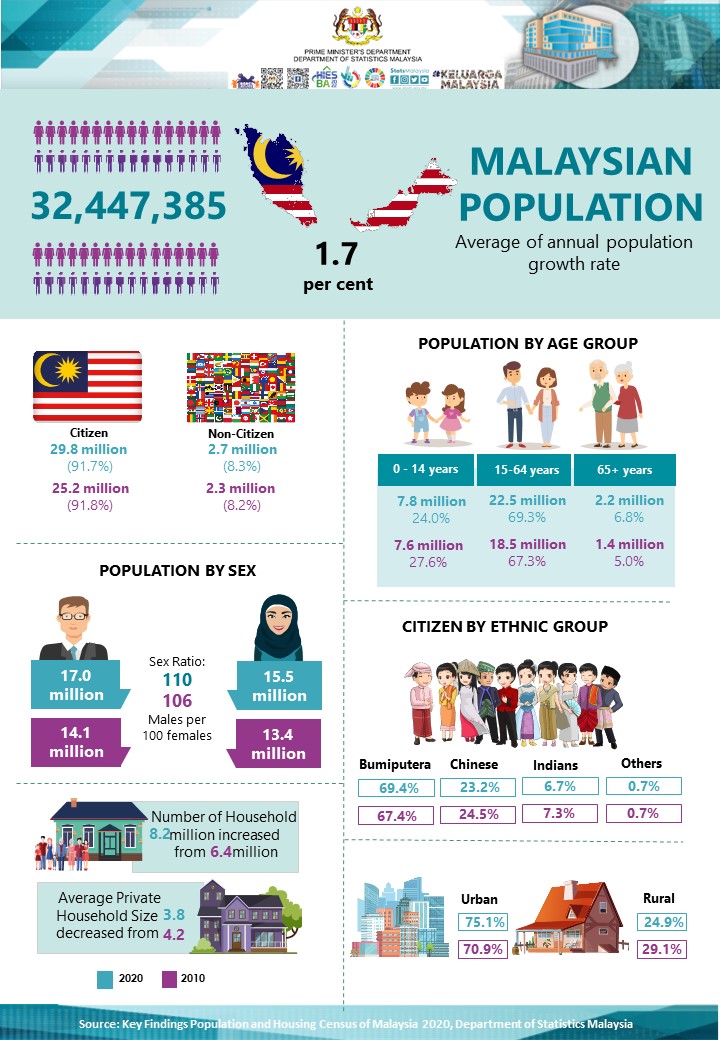 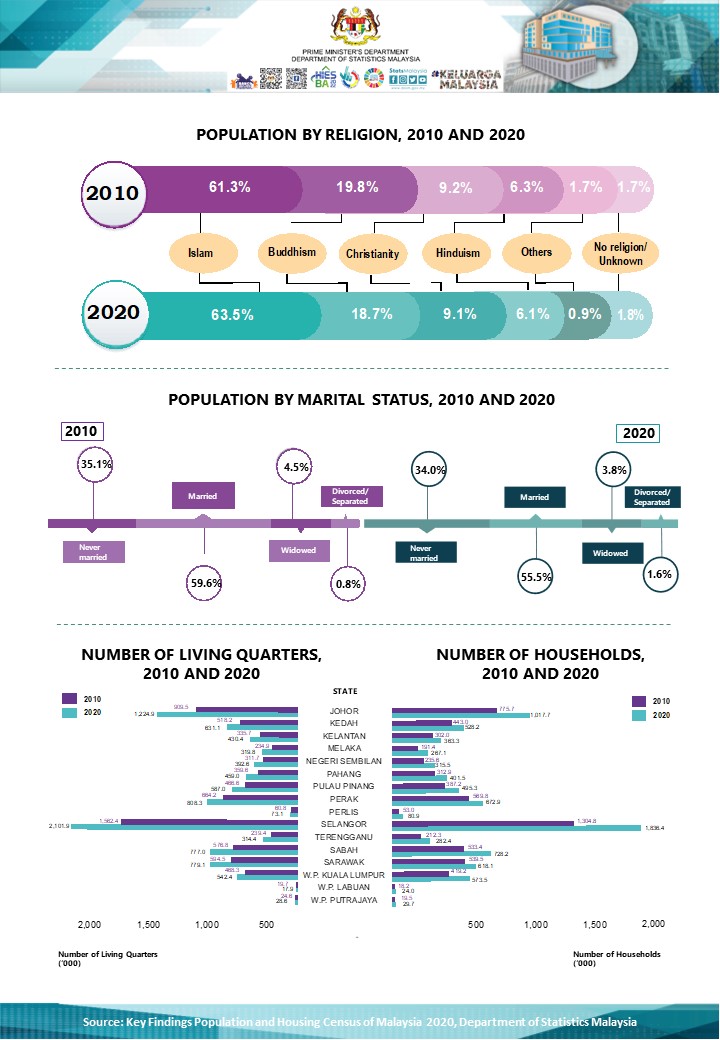 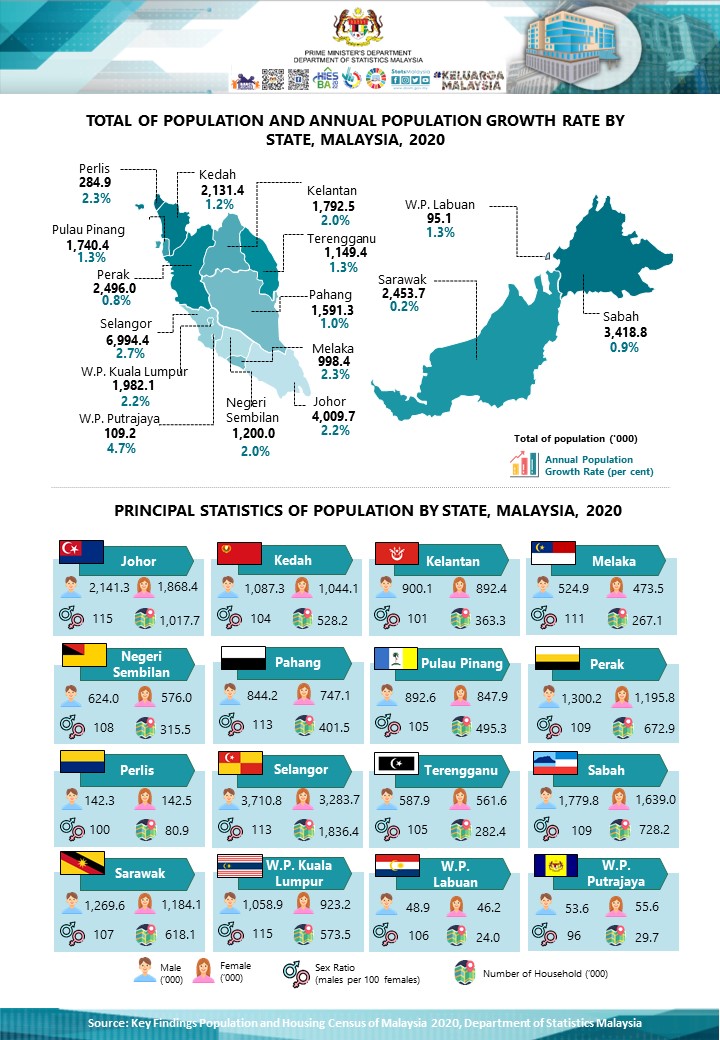 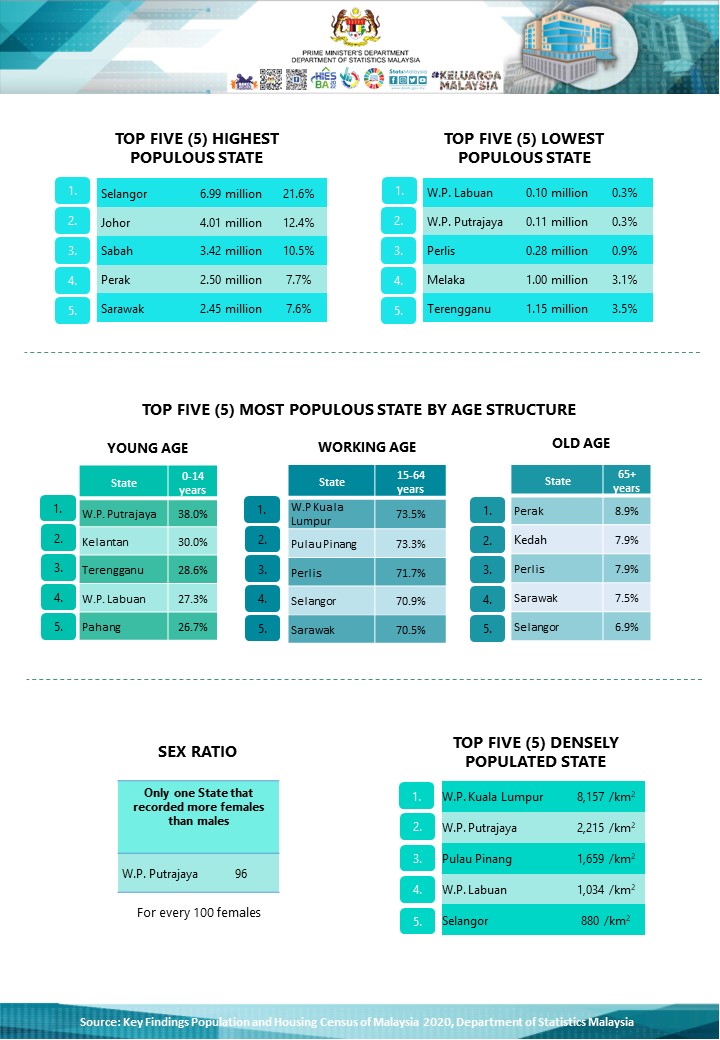 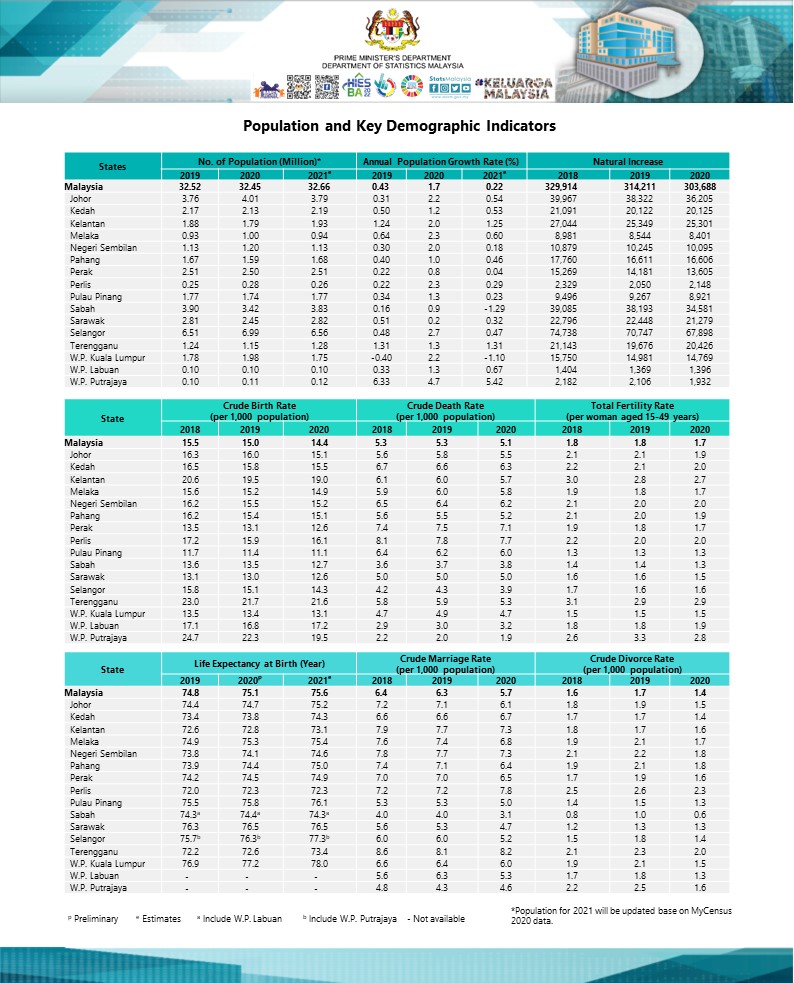 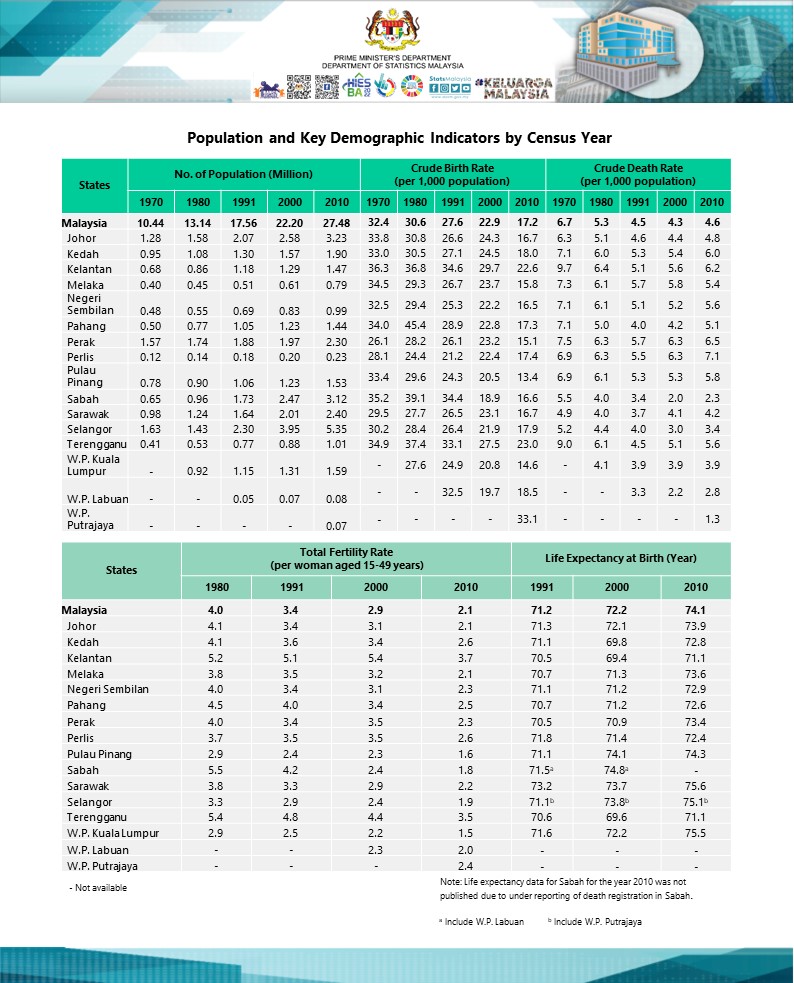 Implementation of MyCensus 2020 was approved through the Cabinet Meeting on 12 July 2017 is the sixth Census and it is implemented based on the Federal Constitution (Articles 74, 77, 109 and 112C), the Census Act 1960 (Revised 1969) and the Statistics Act 1965 (Revised 1989). Based on the Gazette of the Census Direction and Appointment of Commissioner of Census dated 11 February 2020, His Majesty the Yang di-Pertuan Agong agreed to direct the Population and Housing Census to be carried out throughout Malaysia.

The implementation of MyCensus 2020 is the sixth Census undertaken after the establishment of Malaysia in 1963. The undertaking of Census is based on the Federal Constitution (Articles 74, 77, 109 and 112C), the Census Act 1960 (Revised 1969) and the Statistics Act 1965 (Revised 1989). The Cabinet Meeting on
12 July 2017 has agreed for the Department of Statistics to carry out the Population and Housing Census in 2020. Based on the Federal Government Gazette of the Census Direction and Appointment of Commissioner of Census dated 11 February 2020, His Majesty the Yang di-Pertuan Agong has ordered that the Population and Housing Census to be undertaken throughout Malaysia while the Chief Statistician of Malaysia has been appointed as the Census Commissioner effective 1 April 2019.

De jure approach is used where the information of each population is collected according to their usual place of residence on census day 7 July 2020. His Majesty the Yang Di-pertuan Agong has agreed to be the first respondent to complete the Census online using e-Census platform. Following that, the Census began simultaneously throughout Malaysia on 7 July 2020. The Launching Ceremony of MyCensus 2020 was held on the same date. The governance of MyCensus  2020 consists of Census Steering Committee chaired by the Chief Secretary to the Government and Census Main Committee chaired by the Chief Statistician of Malaysia as the Census Commissioner, and involves various agencies at the federal and state levels including Deputy Commissioners, Assistant Commissioners and District Superintendents. In addition, nearly 8,000 Supervisors and 40,000 Enumerators have been appointed for the period 2017 to 2022.

The implementation of MyCensus 2020 utilises the usage of ICT through the modernisation and integration of the Malaysia Integrated Population Census System (MyIPCS). MyCensus 2020 data collection operation which started on 7 July 2020 has ended on 31 October 2021 using the mode of e-Census, Computer-Assisted Personal Interview (CAPI), Computer Assisted Telephone Interview (CATI), Paper & Pen Interview (PAPI) and Drop Off & Pick Up (DOPU). Based on MyCensus 2020 operation, 23.7 per cent of the population was enumerated online through e-Census and CATI modes and 76.3 per cent through face-to-face via CAPI, PAPI and DOPU modes. Of the 76.3 per cent face-to-face interview, 68.2 per cent were through CAPI (hybrid mode of online and face-to-face enumeration) and 8.1 per cent were counted via PAPI and DOPU. Thus, the current census is carried out by adapting the digital transformation and 91.9 per cent was electronic based (paperless). The challenge of conducting recent Census was the outbreak of COVID-19 situation. Thus, the Census data collection operations were rescheduled four times during the period of July 2020 to October 2021. Preliminary data was announced during the close of census operations on 1 November 2021.

An integrated management has been introduced by DOSM by developing a secured, comprehensive and interactive census portal (www.mycensus.gov.my) for the purpose of implementing the MyCensus 2020. This portal is an information gateway that provides various census information in the form of infographics, interactive visualizations and various online applications such as Stats Geoportal which provide census data in an interactive geospatial format for the smallest geographical area level up to the district level. A special platform, MyCensus 2020 dashboard has been developed to provide data at finger tips to fulfil stakeholders’ need in socio-economic development planning. Indirectly, it can bridge the digital divide in accessing diverse and complex data sources.

YAB Prime Minister said, “The findings of MyCensus 2020 will be used as a new benchmark for the Government to outline policies related to the development of people's well-being, in addition to providing comprehensive input in the implementation of existing policies such as Vision 2030 Common Prosperity, 12th Malaysia Plan, the 2030 Agenda for Sustainable Development Goals (SDGs)”. The findings of MyCensus 2020 also serve as a catalyst towards achieving the vision of the Keluarga Malaysia.

In producing population and demographic statistics through the implementation of the MyCensus 2020, collaboration and strategic cooperation between the Department of Statistics Malaysia (DOSM) with Ministries and Agencies, State Governments and Local Authorities as well as the private sector and the general public have been closely intertwined to ensure the integrity of data.

"DOSM would like to thank the Government for entrusting DOSM in leading the implementation of the sixth Census and I also express my highest appreciation for my appointment as the sixth Malaysian Census Commissioner in guiding the planning, operation, analysis and dissemination of Census findings," he said. YBhg. Dato’ Sri Dr. Mohd. Uzir Mahidin, Chief Statistician of Malaysia and Commissioner of the MyCensus 2020.

Brief report on Key Findings Population and Housing Census of Malaysia 2020 is per Appendix 1 and can be accessed on the MyCensus 2020 Dashboard on the MyCensus 2020 Portal (www.mycensus.gov.my). This dashboard will be updated from time to time. Meanwhile, a holistic interactive census portal is also being developed towards the dissemination of attractive and user -friendly census data.

The Department of Statistics Malaysia is conducting the Income, Household Expenditure and Basic Amenities Survey (HIES/BA) 2022 starting from 1 January 2022 to 31 December 2022. The department greatly appreciates the cooperation of the selected respondents to provide information to DOSM officers as well as the success of this survey. Please visit www.dosm.gov.my for more information.

Population by State and Administrative District

The composition of Malaysia's population consists of 17.0 million or 52.3 per cent males, as compared to 15.5 million (47.7%) females. Compared to a decade ago, the sex ratio increased to 110 males for every 100 females (2010: 106). The highest sex ratio was recorded in Johor and Kuala Lumpur at 115, followed by Pahang and Selangor (113) and Melaka (111). The lowest sex ratio was recorded in W.P. Putrajaya (96), which means females outnumbered males in W.P. Putrajaya. The highest sex ratio that showed more males than females at the administrative district level are in Bukit Mabong, Sarawak (157), Belaga, Sarawak (136), Cameron Highlands (132) and Bentong, Pahang (131).

The Department of Statistics Malaysia has made another history of producing comprehensive economic and social statistics with more targeted geographical details up to the Parliament and State Legislative Assembly (SLA) levels.

The availability of statistics at small areas which are Parliament and DUN level are important and beneficial, especially to the Members of Parliament and State Assemblymen. Such statistics are useful in improving the governance and the rakyat’s well-being.

The main findings of the Subnational Statistics Parliaments show that the three most populous parliaments located in Selangor namely Parliament of Bangi (P.102) having a total of 688 thousand persons followed by Kota Raja (P.111) with 523 thousand persons and Subang (P.104) with 478 thousand persons. Bangi also recorded the highest number of households and living quarters (LQ) at 182,471 persons and 200,957 LQ. The Parliament of Jelutong (P.050) has the highest population density of 33,287 per square kilometre, followed by Tanjong (P.049) with 26,963 populations and Pandan (P.100) with 24,229 persons per square kilometre.

Three parliamentary constituencies in Selangor recorded the highest number of business establishments, namely Petaling Jaya (P.105) at 33,902, followed by Bukit Bintang (P.120) at 31,784 and Damansara (P.106) at 31,559 business establishments. Parliament in Selangor also has the highest basic facilities such as petrol stations, car workshops and many more. The Parliament of Segambut (P.117), Kepong (P.114) and Seputeh (P.122) recorded the highest median monthly household income of RM13,357, RM11,274 and RM11,113, respectively.

The publication released today will continue to be updated and become an important reference in decision-making, input policy-formulation, monitoring and evaluation of the effectiveness of national development programmes as well as research.

This publication can be accessed and free download through the eStatistik on the DOSM portal, www.dosm.gov.my.