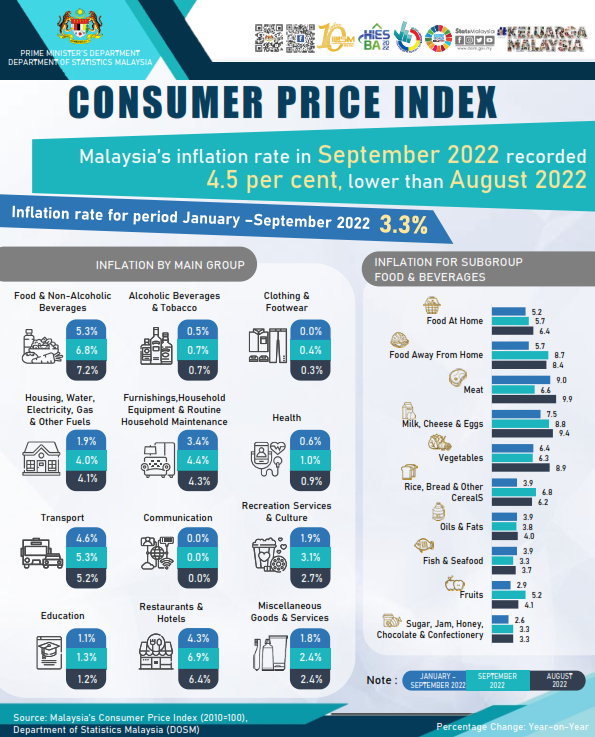 On a monthly basis, the inflation in September 2022 moderated to 0.1 per cent as compared to 0.2 per cent in August 2022. This was mainly contributed by the Food & Non-Alcoholic Beverages, Recreation & Cultural Services and Restaurants & Hotels groups which increased by 0.3 per cent respectively. A marginal increase in Transportation of 0.1 per cent also contributed to this moderate increase.

The inflation for the period of January to September 2022 was 3.3 per cent as compared to the same period of the previous year. The increase was mainly attributed by Food & Non-Alcoholic Beverages (5.3%), Transport (4.6%) and Restaurants & Hotels (4.3%).

Inflation for the third quarter of 2022 increased 4.5 per cent as compared to the same quarter of the previous year. Food and Restaurants & Hotels groups were the main contributor to the increase at 7.0 per cent and 6.4 per cent respectively.

Core inflation registered an increase of 4.0 per cent in September 2022 as compared to August 2022 (3.8%). Core inflation measures changes in the prices of all goods and services, excluding volatile items of fresh food as well as administered prices of goods by the government.

The full publication of the Consumer Price Index Malaysia, September 2022 can be downloaded from eStatistik portal.