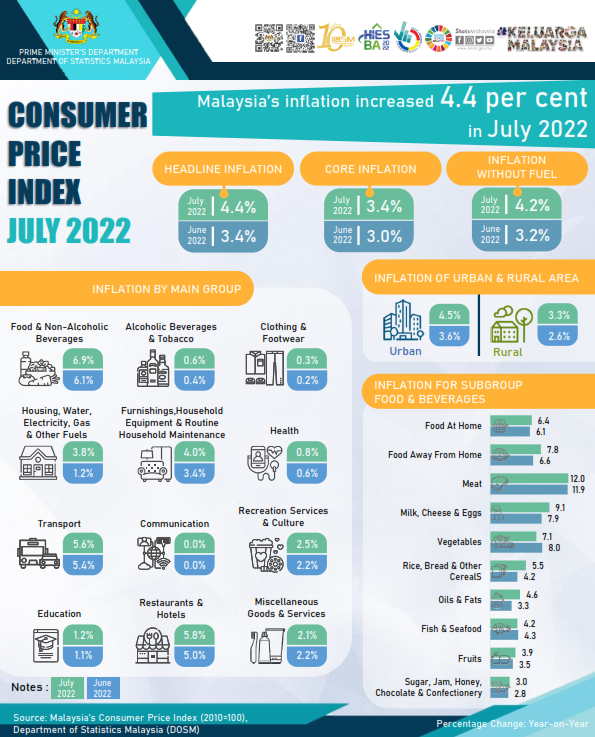 Malaysia’s inflation increased 4.4 per cent to 127.9 in July 2022 as against 122.5 in the same month of the preceding year. The Food index increased 6.9 per cent and remained as the main contributor to the rise in the inflation of this month. However, there are food items that showed a slower growth momentum as compared to June 2022. Among the subgroups were Fish & seafood (4.2%) and Vegetables (7.1%).

The increase in Malaysia’s inflation this month was also due to the lower base effect last year as a result of the electricity bill discount from five to 40 per cent according to total usage given to domestic consumers under the National People's Well-Being and Economic Recovery Package (PEMULIH) from July to September 2021.

Apart from the Food group, all other groups also continued to record increases except for Communication which remained unchanged as compared to the same month of the previous year. Restaurants & Hotels increased 5.8 per cent followed by Transport (5.6%); Furnishings, Household Equipment & Routine Household Maintenance (4.0%) and Housing, Water, Electricity, Gas & Other Fuels (3.8%). Meanwhile, Recreation Services & Culture also registered an increase of 2.5 per cent, Miscellaneous Goods & Services (2.1%) and Education (1.2%).

The inflation for the period of January to July 2022 increased 2.8 per cent as compared to the same period of the previous year. On a monthly basis, the inflation increased 0.4 per cent as compared to June 2022. The increase was mainly attributed by Restaurants & Hotels (0.8%) and Food & Non-Alcoholic Beverages (0.7%). This was followed by Furnishings, Household Equipment & Routine Household Maintenance (0.6%) and Transport (0.5%).

The core inflation and inflation without fuel registered an increase of 3.4 per cent and 4.2 per cent respectively in July 2022 as compared to the same month of the preceding year.

The inflation for all states registered increases in inflation while three states showed increases above the national inflation level of 4.4 per cent.

The full publication of the Consumer Price Index Malaysia, July 2022 can be downloaded from eStatistik portal.