Final National Accounts Statistics (FNAS) 2005 provides a new benchmark for Malaysia's economic statistics. The benchmarking includes the statistics that are used for the purpose of rebasing The Gross Domestic Product (GDP) and Producer Price Index (PPI).

Malaysia's economy as reflected by the GDP at purchaser's prices was estimated at RM540 billion in 2005. The FNAS enable GDP to be compiled by three approaches i.e. the production, expenditure and income approach as shown in Table A below: 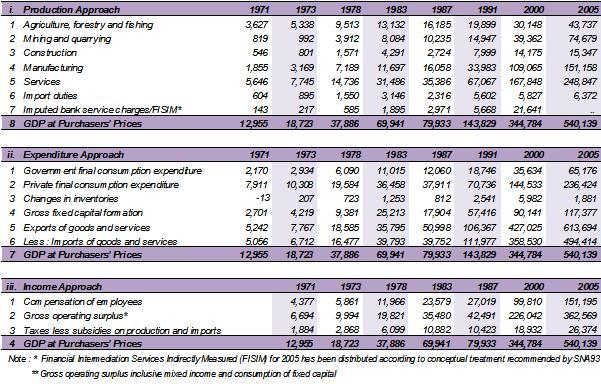 Overall, the GDP increased by 8.8 per cent annually at current prices for a period of five years from 2000 to 2005. Based on the production approach value added for each sector registered the average annual growth in the range of 1.4 per cent to 13.9 per cent as shown in Table B. The Mining and Quarrying Sector posted the highest growth over the five years, i.e. 13.9 per cent followed by Services Sector 11.1 per cent. Meanwhile, the Construction Sector recorded the smallest growth of 1.4 per cent .

The Services and Manufacturing Sectors continually gives significant contribution to the GDP by registering 46.1 per cent and 28.0 per cent respectively as reflected in Table C.

The economy in 2005 was driven by domestic demand recorded at 77.6 per cent as reflected in Table E. Private Final Consumption Expenditure in 2005 amounted to nearly RM236 billion. Exports showed a trade surplus of RM119 billion. Balance of Goods and Services also registered a high growth, i.e. by 11.7 per cent. The growth was supported by higher growth of exports. Thereby, Balance of Goods and Services showed a remarkable increase in 2005.

Table E : Expenditure on GDP by Type of Expenditure Based on Final National Accounts
Statistics (1971-2005)

From the income approach perspective the Gross Operating Surplus registered RM363 billion or 67.1 per cent from the GDP in 2005. Meanwhile, the Compensation of Employees recorded RM151 billion and Taxes less Subsidies on Production and Imports was RM26 billion that made up 28.0 per cent and 4.9 per cent respectively as shown in Table F and Table G.

The growth of Gross Operating Surplus was the highest of 9.0 per cent as shown in Table G. Taxes less Subsidies on Production and Imports grew 6.9 percent annually, while Compensation of Employees recorded 8.7 per cent annual growth.