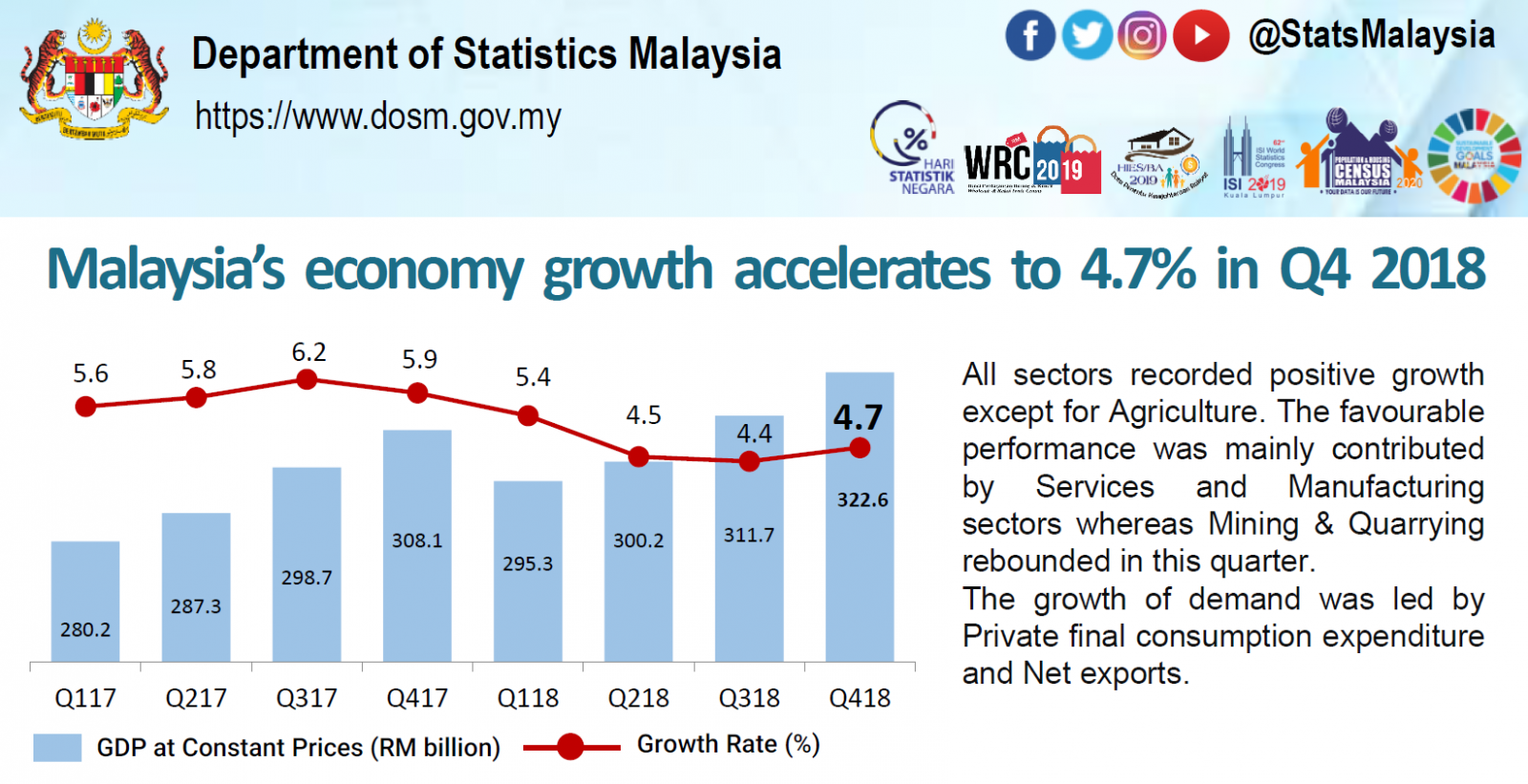 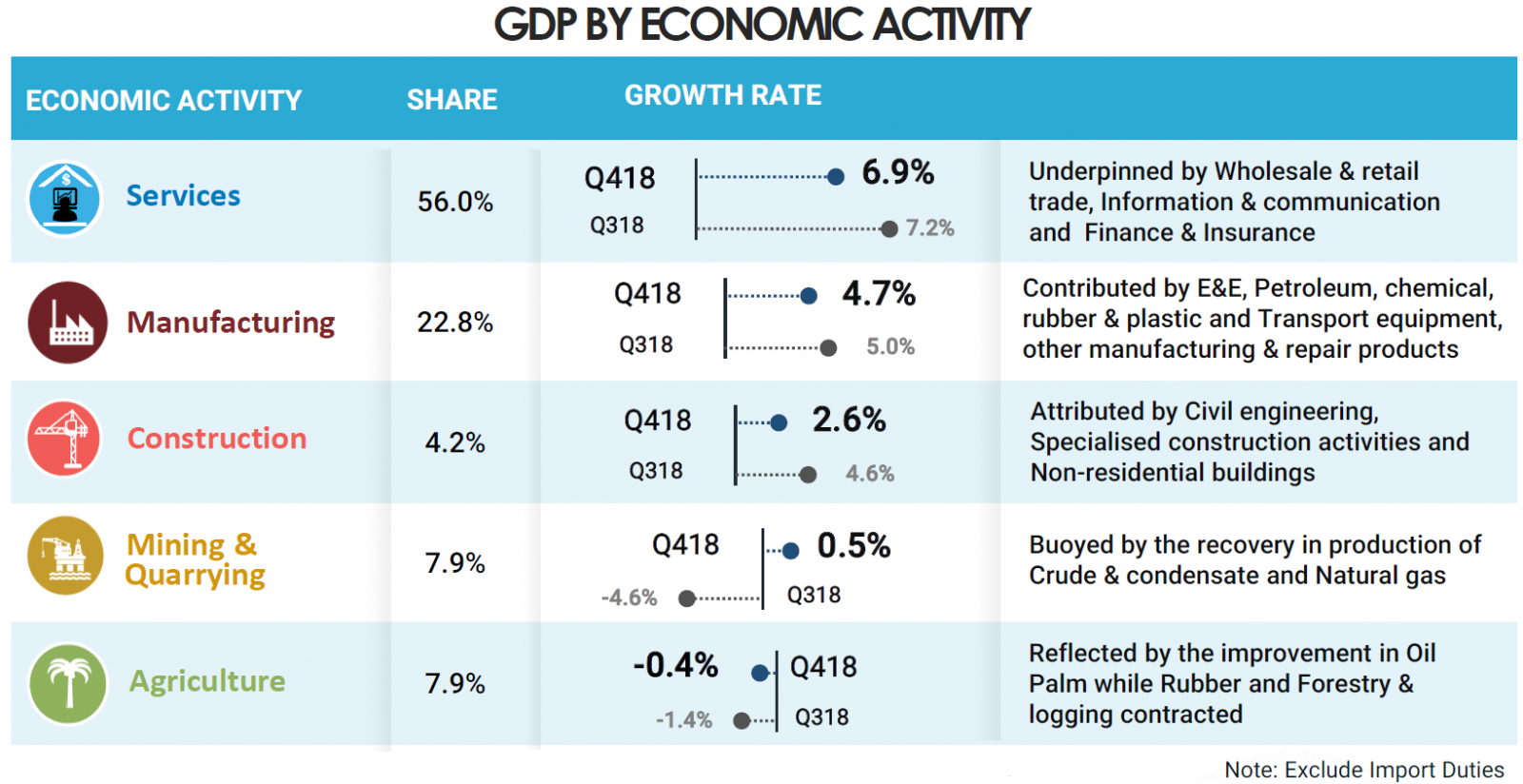 In the fourth quarter of 2018, Malaysia's economy recorded a better performance with a growth of 4.7 per cent after the moderation of two consecutive quarter in 2018. All key sectors recorded positive growth except for Agriculture. The favourable performance was mainly contributed by Services and Manufacturing sectors, whereas Mining & Quarrying rebounded in this quarter. The growth of demand was led by Private final consumption expenditure and Net exports.

2018 as a whole, Malaysia's economy grew at 4.7 per cent with a value of Gross Domestic Product (GDP) recorded RM1.23 trillion at constant prices and RM1.43 trillion at current prices. 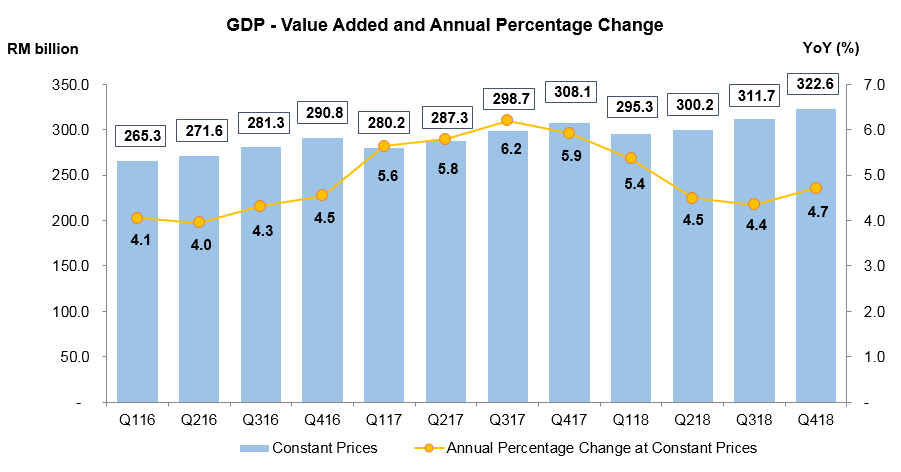 Services sector accounted 56.0 per cent of GDP grew 6.9 per cent against 7.2 per cent in the preceding quarter. The performance of Services sector was underpinned by Wholesale & retail trade and Information & communication sub-sector. Wholesale & retail trade grew 8.6 per cent backed by retail segment which remained a double-digit growth of 12.0 per cent. Furthermore, Information & communication remained strong by posting a growth of 8.1 per cent driven by communication and computer services activities. Finance & insurance moderated 4.5 per cent supported by Insurance which grew 8.4 per cent. For the annual performance of 2018, Services sector expanded 6.8 per cent as compared 6.2 per cent in 2017.

Manufacturing sector moderated 4.7 per cent against 5.0 per cent in the previous quarter. Electrical, Electronic & Optical products continued to be the main contributor in this sector expanded further 6.9 per cent backed by printed circuit board, electronic integrated circuit micro assembles and communication equipment. Meanwhile, Petroleum, Chemical, Rubber & Plastic products registered a growth of 3.6 per cent which attributed by refined petroleum, rubber and plastic products. The performance of Manufacturing in this quarter was further spurred by Transport equipment, other manufacturing & repair which augmented further to 8.7 per cent. The sturdy growth of this activity was induced by motor vehicles and transport equipment. Manufacturing sector grew 5.0 per cent in 2018 after registering 6.0 per cent in 2017.

Gross Fixed Capital Formation (GFCF) eased from 3.2 per cent to 0.3 per cent. The moderation of GFCF was due to the decline in Machinery & Equipment at 1.5 per cent and slower momentum in Structure which grew marginally at 0.8 per cent. Conversely, Other asset increased to 5.2 per cent from 0.1 per cent in the preceding quarter. Private sector grew at 4.4 per cent while Public sector registered a negative growth of 4.9 per cent. For the year 2018, GFCF grew at a slower pace of 1.4 per cent driven by Private sector.

Malaysia's current account surplus surged to RM10.8 billion in the final quarter of 2018. The favourable performance was spurred by the larger surplus in goods account at RM33.0 billion from RM26.6 billion in the previous quarter.

For the year 2018, the current account surplus reached RM33.5 billion contributed by higher surplus in goods account at RM121.4 billion and lower deficit in services account at RM19.7 billion. 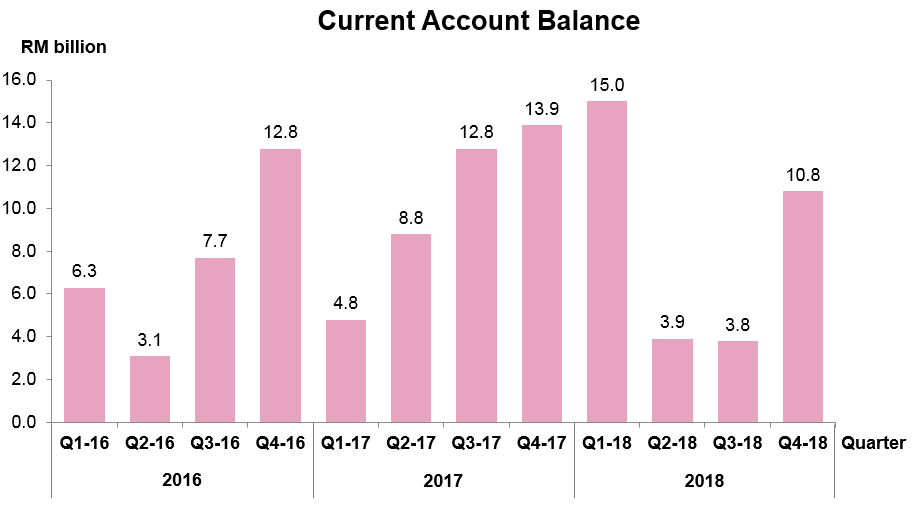 Foreign Direct Investment (FDI) accelerated to RM12.9 billion from RM4.3 billion in the previous quarter. The FDI flows were mainly from Netherlands, Japan and Hong Kong. The main contribution of FDI flows were Services and Manufacturing sectors in this quarter. Malaysia's Direct Investment in Abroad (DIA) also registered a higher net outflow of RM10.8 billion (Q3 2018: RM3.8 billion) with the main destinations to Canada, Indonesia and Singapore. In 2018, FDI in Malaysia recorded RM32.6 billion as compared to RM40.4 billion in the last year while DIA was RM21.3 billion (2017:RM24.2 billion).

The financial liabilities position in this quarter decreased to RM1,761.9 billion against RM1,793.1 billion in the previous quarter, while the total assets was RM1,684.2 billion. This translated to the lower net liabilities of RM77.7 billion as at end of fourth quarter 2018.

The international reserves of Bank Negara Malaysia stood at RM419.5 billion as compared to RM426.9 billion in the previous quarter.

Exports of goods in the fourth quarter of 2018 were valued at RM264.5 billion recorded the growth of 8.0 per cent. The main products which contributed to the increased were electrical and electronic products, that increased 11.8 per cent to RM102.4 billion followed by refined petroleum products (26.8%), liquefied natural gas (18.3%) and crude petroleum (23.0%).

Conversely, palm-oil & palm-oil based products which valued at RM16.5 billion declined 18.0 per cent in this quarter.

In the fourth quarter of 2018, imports valued at RM229.9 billion which grew at 5.7 per cent. Both intermediate goods and consumption goods increased while capital goods dropped.

Intermediate goods increased 1.2 per cent to RM119.1 billion has contributed with the share of 51.8 per cent to the total imports. The growth was mainly attributed by industrial supplies, processed and fuel & lubricants, primary.

While, consumption goods increased 4.7 per cent to RM19.6 billion and amounted 8.5 per cent to the total imports. The growth was underpinned by non durables, processed food & beverages and durables.

The employed persons recorded an increase of 2.4 per cent in fourth quarter 2018 to 14.9 million persons based on the Labour Force Survey.

The performance of fourth quarter 2018 was showed by the businesses expectations on the future economic prospect through Business Tendency Statistics which anticipated favourable performance in the fourth quarter of 2018. Approaching first quarter 2019, the Leading Index (LI) shows that the Malaysia's economic growth is expected to continue to growing on the coming quarter.