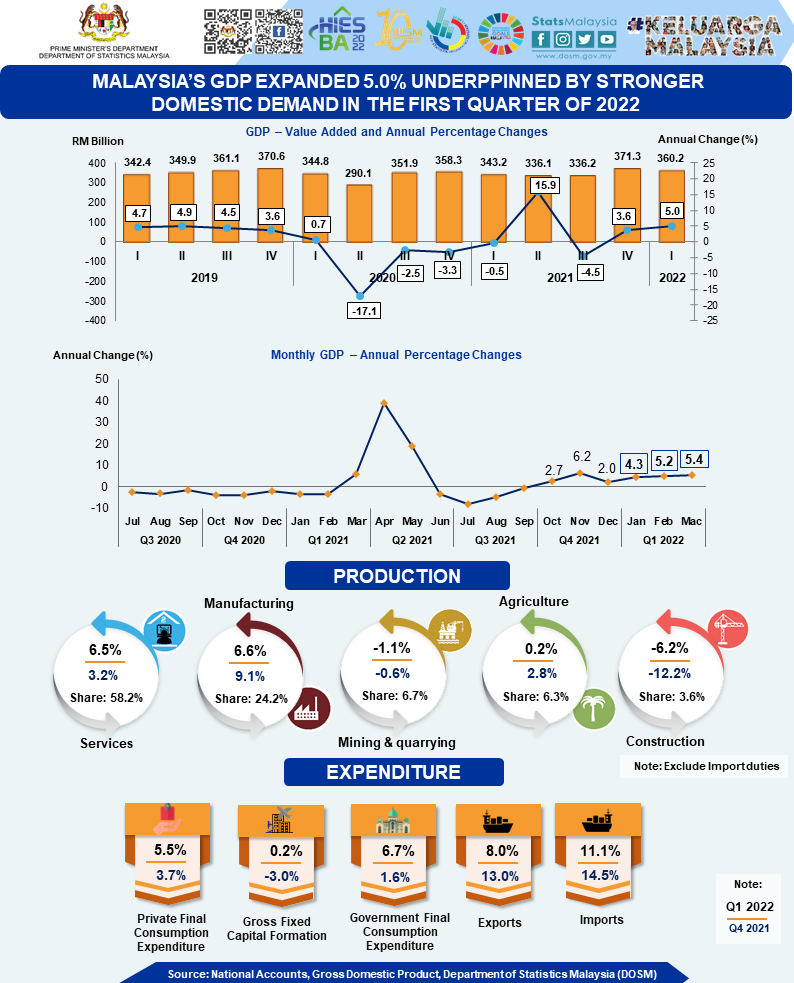 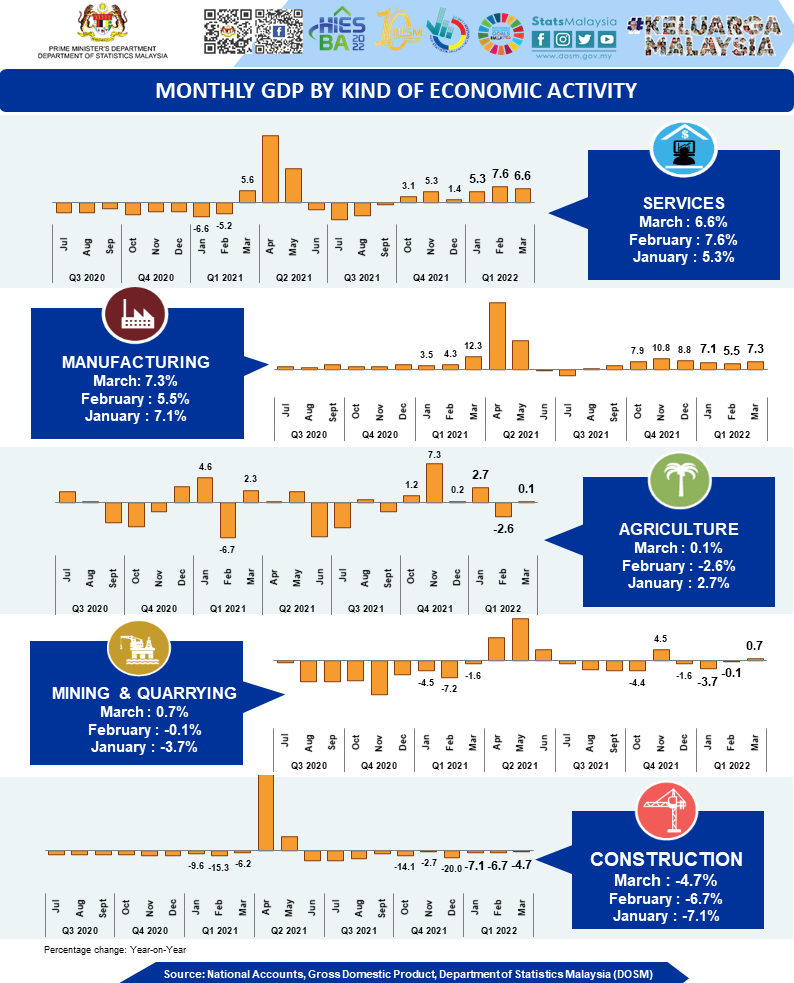 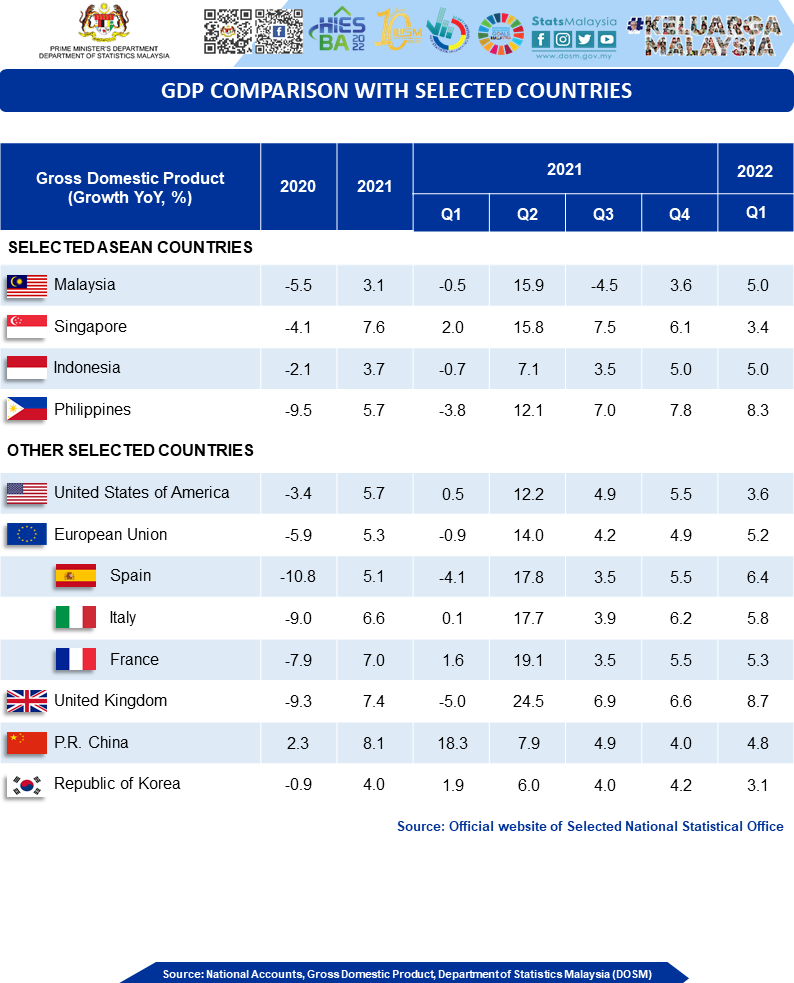 Malaysia’s GDP expanded further 5.0 per cent as compared to 3.6 per cent in the previous quarter. In terms of seasonally adjusted, GDP moderated at 3.9 per cent (Q4 2021: 4.6%) in this quarter. Correspondingly, the monthly economic performance showed a better growth  from January to March 2022. GDP performance in January 2022 grew 4.3 per cent, risen to 5.2 per cent and 5.4 per cent in February and March 2022 respectively. From the current economic standing, the economic performance for the first quarter of 2022 has surpassed the level of first quarter 2019 by 5.2 per cent or RM17.9 billion.

The economic performance increased further in this quarter in tandem with a robust growth in Services sector. This was supported by higher household consumption which reflected from the improvement of consumers’ confidence level. Moreover, further recovery in labour market and continued expansion on external front has led to the economic growth despite of challenging environment especially inflation and global supply chain disruption.

The economic performance in the first quarter of 2022 on the supply side was driven by the continuous growth of Services, Manufacturing and Agriculture sectors. On the demand side, the growth was underpinned by the expansion in the household consumption expenditure and a turn around in Gross fixed capital formation in this quarter.

Private final consumption expenditure posted a stronger growth of 5.5 per cent (Q4 2021: 3.7%) in the first quarter of 2022. In terms of seasonally adjusted, the overall performance of Private final consumption expenditure increased 4.6 per cent (Q4 2021: 4.3%). This growth was attributed to a double-digit growth in consumption for Communication (11.8%) and Restaurants & hotels (10.9%). Besides that, Transport (8.9%) and Food and non-alcoholic beverages (4.6%) also edged up in this quarter.

Gross fixed capital formation (GFCF) or investment on fixed assets recorded a marginal positive of 0.2 per cent (Q4 2021: -3.0%) in this quarter that was influenced by the double-digit growth in Machinery & equipment (12.0%). The gradual improvement of GFCF can be seen as a catalyst for higher economic capacity to uplift the production of the future output. Conversely, Structure and Other assets has weighed down the overall GFCF performance by registering a decline of 7.9 per cent and 0.9 per cent, respectively. GFCF by sector, indicates a marginal increase of 0.4 per cent in Private sector, whereas Public sector showed a  decrease of 0.9 per cent in the first quarter of 2022. In terms of seasonal adjusted, this sector registered an increase of 5.0 per cent (Q4 2021: 4.4%).

Overall, Malaysia's economy prospect is picking up momentum and anticipating to play a pivotal role in shaping the national economy in the coming months. Leading Index (LI) recorded an upward trend indicating that Malaysia's economic recovery remained intact. This is in line with the consistent growth rate of the key economic indicators such as employment and external trade.

Malaysia's overall economic performance is picking up momentum and is anticipated to recover gradually throughout 2022 as the country transitions to an endemic phase. Furthermore, the relaxation of restrictions and reopening of borders announced on 1 st April 2022, would encourage social engagement activities and expected to lead better impact on the economy. 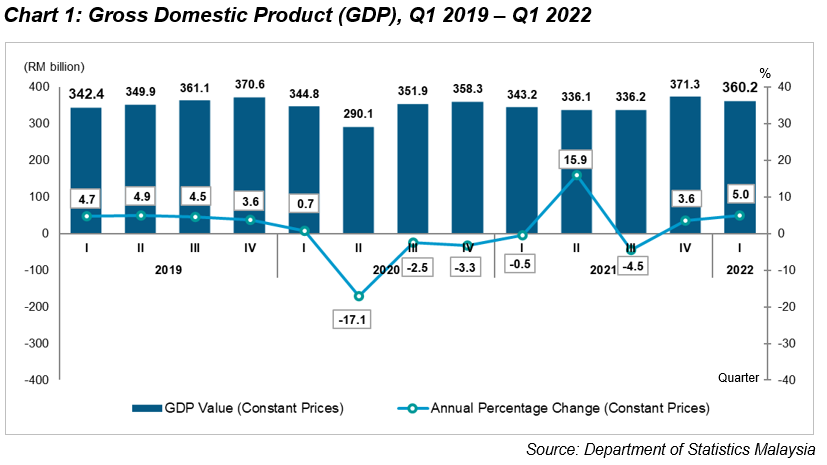 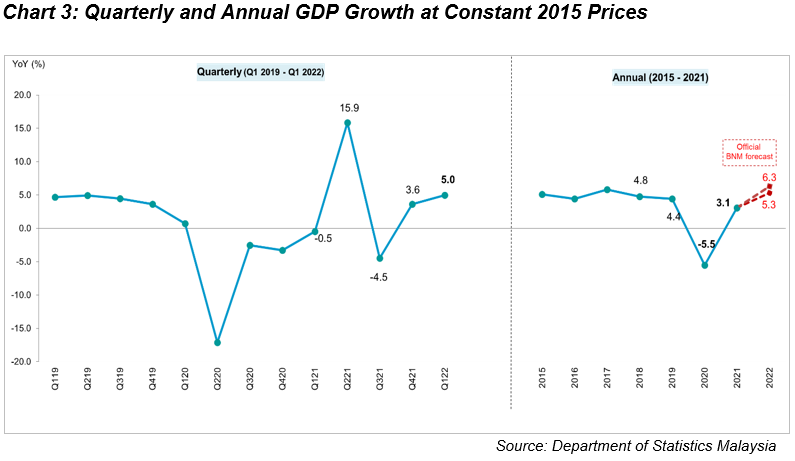 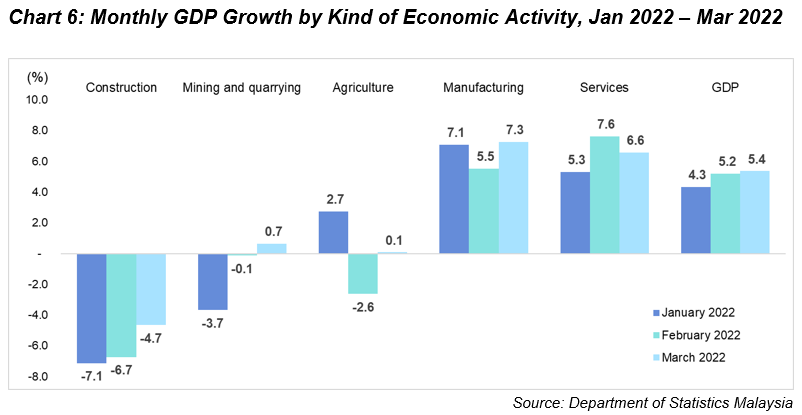 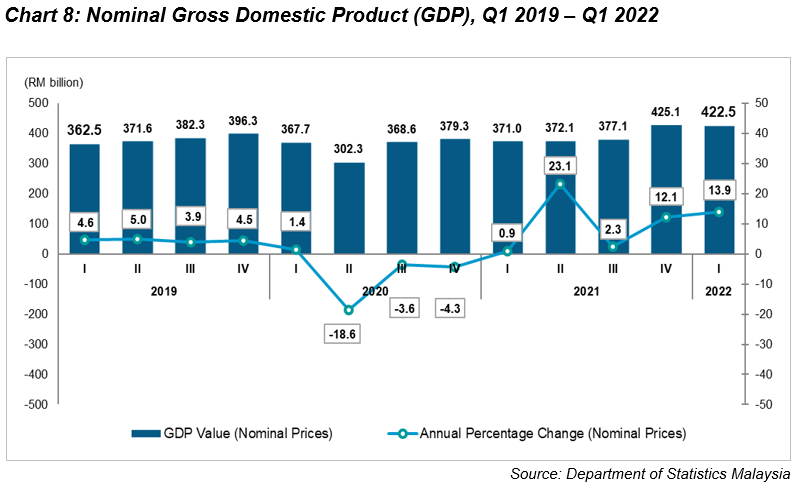 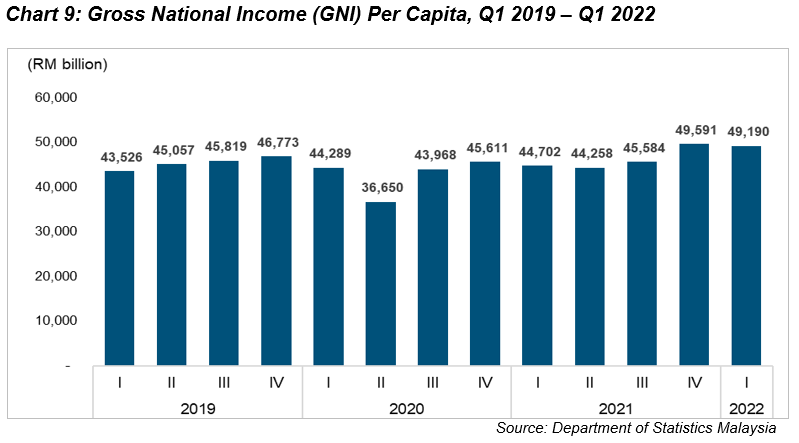 The full publication of  Gross Domestic Product, First Quarter 2022 can be downloaded through  eStatistik portal.

For more details, please refer to the Department's portal: www.dosm.gov.my.