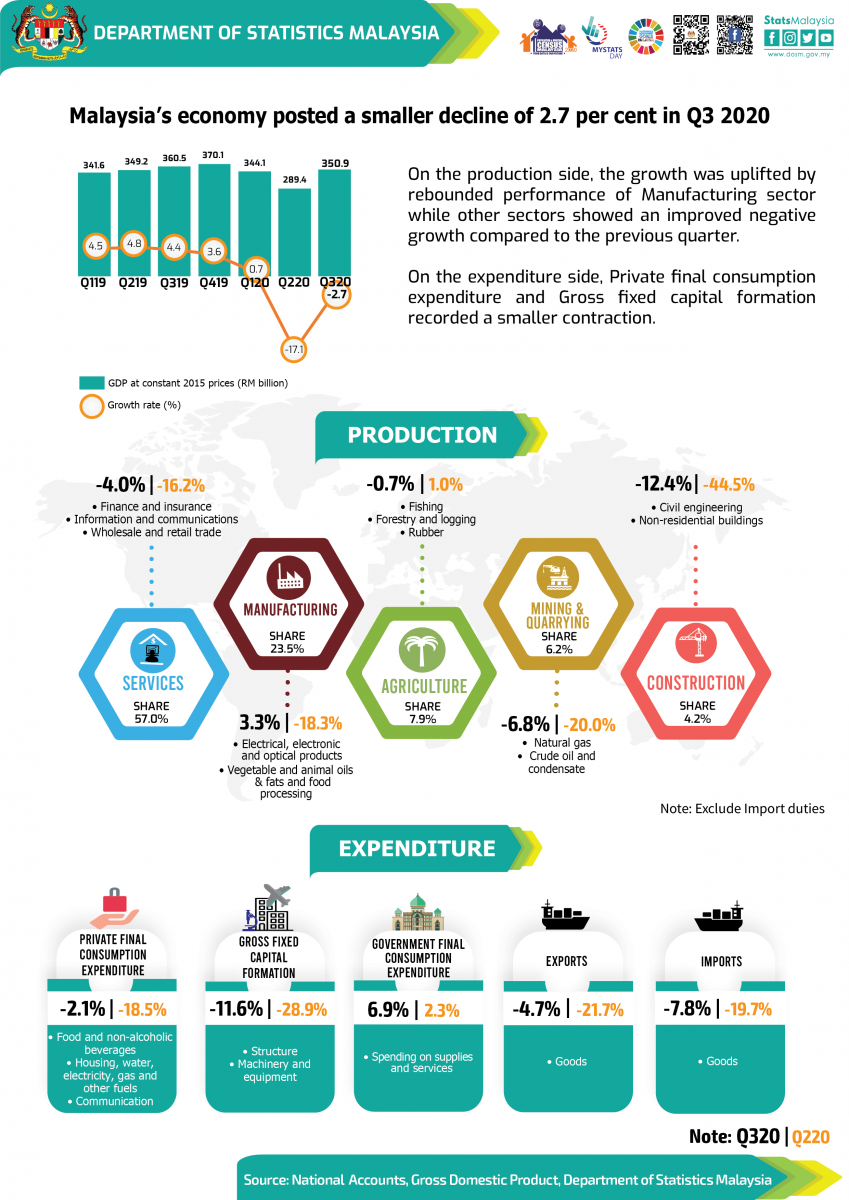 Malaysia’s GDP decreased at a slower pace of 2.7 per cent from the double-digit decline 17.1 per cent in the second quarter of 2020. The economic performance during this pandemic period is also measured on the monthly basis where July posted a lower decline 2.7 per cent, August contracted to negative 3.6 per cent while September improved to a smaller negative 1.6 per cent. On a quarter-on-quarter seasonally adjusted, GDP elevated to 18.2 per cent (Q2 2020: -16.5%).

The COVID-19 outbreak has changed the economic landscape in terms of production level, household spending, investment and labour market. In the third quarter of 2020, a continuous recovery is seen in the country’s economic performance amid the challenges to contain the spread of COVID-19 pandemic through various phases of Movement Control Order (MCO) effective from 10th June 2020 with the reopening of economic activities and lift the ban on interstate travel. As more economic sectors resumed, the unemployment rate slightly dropped to 4.7 per cent in this quarter as compared to 5.1 per cent in second quarter.

In the third quarter, the growth was uplifted by a rebounded performance of Manufacturing sector while other sectors showed an improved negative growth compared to the previous quarter. Overall, the performance in the third quarter was mainly driven by the Manufacturing sector which grew 3.3 per cent compared to the decline 18.3 per cent in the previous quarter, supported by Electrical, electronic & optical and Vegetable and animal oils & fats and food processing products. The favourable performance was attributed by exports-oriented industries which turnaround to 5.0 per cent (Q2 2020: -13.5%) and this was reflected in the performance of total exports in the month of September 2020 which recorded a positive double-digit growth.

The Agriculture sector slightly dropped 0.7 per cent due to the decrease in Fishing and Rubber sub-sectors. However, Other agriculture, Oil palm and Livestock sub-sectors have cushioned the smaller decline in this sector. In this quarter, Malaysia has benefitted from the strong increase of crude palm oil prices which grew by 37.5 per cent as compared to 15.0 per cent in the preceding quarter. The increase in crude palm oil prices was influenced by the higher global demand precisely from Malaysia’s major trading partners India and China.

The Services sector recorded a smaller negative 4.0 per cent, an improvement from negative 16.2 per cent in the second quarter of 2020. The better performance in Finance & insurance and Information & communications sub-sectors have contributed to the reduced contractions in this sector. The Wholesale and retail trade sub-sector recorded a smaller contraction of 2.5 per cent supported by the notable performance of the Motor vehicles which began to recover with a positive growth. This was in line with the exemption of sales tax for locally assembled car and lowering tax for imported car by the Government has boost up the motor vehicles sales in this quarter. Furthermore, as the country is still engulfed by the pandemic, sales of essential items were the driving factor of the wholesale and retail activities. Thus, this contributed for the retail segment to record a decreasing margin as the sales volume of businesses have decreased compared to the previous year. Nevertheless, Tourism-related industries such as Food & beverage and accommodation sub-sector registered a smaller decrease driven by the lift-up of interstate travel ban which boosts the domestic tourism activities. Transportation and storage sub-sector remained decreased due to the continuous double-digit negative in air transport, especially in the passenger segment.

The Construction sector fell 12.4 per cent due to the decline in all segments except for Specialised construction activities. This was reflected by the returned to normal operating hours at the construction sites during Recovery Movement Control Order. For this quarter, among the states which performed better were Sarawak, Pulau Pinang and Terengganu. In terms of performance by sector, both public and private sectors recorded an improved negative growth. Meanwhile, Mining & quarrying sector registered a smaller decline of 6.8 per cent from negative 20.0 per cent in the previous quarter. This performance was mainly attributed by improvement in the production of natural gas and crude oil & condensate.

The unprecedented period caused by the COVID-19 pandemic has affected the efficiency of production capacity whereby some industries had to bear fixed or higher expenses on inputs but experiencing a decline or slower outputs. This had caused an increase in the input-output ratio or production efficiency, which subsequently marginalising the value added. This is significantly experienced by the Accommodation, Restaurants, Retail Trade and Recreational & Sports sub-sectors. Besides that, there are also few industries facing challenges to sustain economies of scale due to the lack of demand, which will lead to unfavourable condition to the economic activities. The absence of foreign travellers’ spending in our country is also a loss of income to our businesses that eventually led to price disequilibrium in the market.

As for the demand segment, Private final consumption expenditure posted a smaller decrease 2.1 per cent (Q2 2020: -18.5%) backed by the expenditure on the essential items such as Food & non-alcoholic beverages; Housing, water, electricity, gas and other fuels and Communication. Moreover, Recreation services & cultural, Restaurants & hotels and Furnishing, household equipment and routine household maintenance which is non-essential expenditure showed better negative growth in this quarter. The lower price of automotive fuels and competitive prices offered by tourisms products has encouraged the domestic travel activities within states. In addition, active online shopping activities of households has also surged the performance in private consumption. Consumption on Transport has also lifted to smaller decline supported by the substantial growth on purchase of cars that consumers benefitted from the exemption of sales tax. Based on quarter-on-quarter performance, Private final consumption expenditure elevated to strong double-digit of 28.9 per cent in this quarter.

Government Final Consumption Expenditure expanded to 6.9 per cent from 2.3 per cent in the preceding quarter due to higher spending in supplies and services.

The investment on fixed asset or known as Gross Fixed Capital Formation (GFCF) decreased 11.6 per cent in the third quarter of 2020 due to the decline in all type of assets namely structure, machinery & equipment and other assets. He added that the declining trend in GFCF was observed since the first quarter of 2019 and this is a concern as investment plays a significant role in a country’s future output generation. The reduction in investment may cause a lower capacity for future production and subsequently will affect the potential output.

In the past few months, most firms have reviewed their business strategies to ensure business sustainability while adhering to standard operating procedures during MCO. This includes reducing operating hours and limiting number of employees working at one particular time. Subsequently, the number of employed persons working less than 30 hours per week went up during the first three quarters of 2020 which is known as underemployment. This refers to the situation of people working fewer than 30 hours per week that leads to the labour underutilisation.

The Leading Index (LI) which is used to predict the direction of economic movements in the future, soften to 108.5 points in August 2020 and remain at 7.6 per cent annual change. Given the direction of LI which continued above trend and moving upward, it indicates a sign of the economy will continue to recover in the coming months.

Nevertheless, the third wave of COVID-19 and the re-enforce of Conditional Movement Control Order in Peninsular Malaysia except for Perlis, Kelantan and Pahang imposed a challenge to the predicted economic direction given by the LI.  More detailed analysis of the current economic and social performance will be available on Malaysian Economic Statistics Review (MESR) vol. 7 that will be published by the end of November 2020. 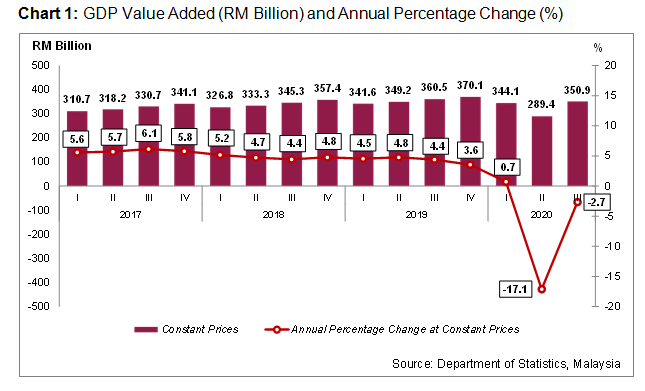