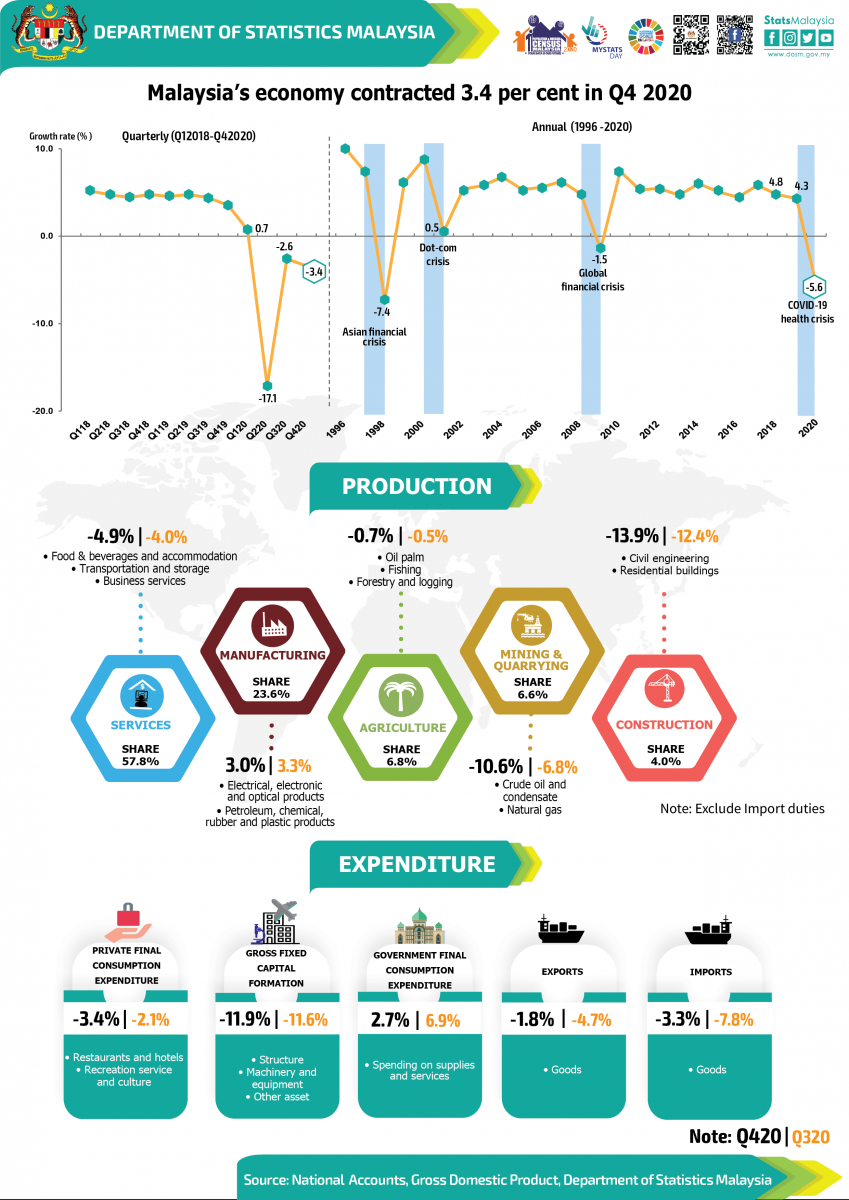 In 2020, various Movement Control Order (MCO) phases were implemented in the country since 18 March 2020 until now to curb the outbreak of COVID-19. Thus, the performance of economic activities following the domestic supply and demand factors and the influence of the external sector has led the Malaysian economy recorded negative growth for the three consecutive quarters for year 2020. Malaysia has experienced a negative growth for five consecutive quarters before recording a positive growth during the Asia Economic Crisis in 1998.

The performance of the fourth quarter of 2020 in terms of Malaysia's monthly GDP performance, the Malaysian economy recorded a contraction of 4.7 per cent in October, declining slower in November (-4.0%) and December (-1.7%). For the quarter-on-quarter seasonally adjusted was recorded at negative growth 0.3 per cent (Q3 2020: 18.2%) in this quarter.

Malaysia’s GDP for the fourth quarter of 2020 contracted 3.4 per cent influenced by the decline in all economic sectors except for Manufacturing sector which registered a positive growth in this quarter. Services sector was a major contributor to economic activity declined 4.9 per cent (Q3 2020: -4.0%) in this quarter. The decrease in Services sector was due to the contraction of sub-sectors for the tourism-related industries following travel restrictions which contributed to the lower foreign tourists arrival to Malaysia as well as movement restriction of domestic tourists in the country. In overall, for year 2020, a number of foreign tourists arrival has drastically dropped as compared to 2019. Among the worst affected sub-sectors were the Food & beverages and accommodation and Transportation and storage segments which dwindled to only 5.9 per cent compared to 7.3  per cent during normal years. The Wholesale and retail trade sub-sector showed a smaller decline of 1.5 per cent in this quarter supported by Wholesale and Motor vehicles segments. Meanwhile, Information & communication sub-sector further expanded which indirectly help to cushion the fall of the Services sector in the fourth quarter of 2020.

The Manufacturing sector for the fourth quarter 2020 maintained a positive growth at 3.0 per cent driven by Petroleum, chemical, rubber & plastics products followed by the Electrical, electronic & optical products. The continuous positive growth was contributed by the export-oriented industries which grew 3.4 per cent (Q3 2020: 5.0%) in line with the overall exports performance which recorded a positive growth of 5.1 per cent in the fourth quarter of 2020. Similarly, the performance of the domestic-oriented industries increased by 2.2 percent (Q3 2020: -0.2%) for the quarter.

In the fourth quarter of 2020, Agriculture sector slightly dropped 0.7 per cent due to the contraction in Oil palm, Fishing, Forestry & logging and Rubber sub-sectors. However, the Livestock sub-sectors increased in this quarter to a better positive trend as compared to previous quarter. Mining & quarrying sector continued to decline 10.6 per cent in this quarter attributed by the decline in production of Crude & condensate and Natural gas due to the lower market demand.

Construction sector contracted 13.9 per cent from negative 12.4 per cent in the preceding quarter. This is in line with average of value work done per project decreased in the fourth quarter of 2020. The contraction in the Construction sector was due by negative growth in Civil engineering, Non-residential buildings and Residential buildings. Nevertheless, Specialised construction activities posted a positive growth in this quarter.

All components of expenditure recorded negative growth except for Government final consumption expenditure which maintained a positive growth in this quarter. Private final consumption expenditure with a contribution of 58.0 per cent to GDP decreased 3.4 per cent (Q3 2020: -2.1%) attributed by the decline of Restaurants & hotels, Recreation services & cultural and Furnishing, household equipment & routine household maintenance. On the contrary, expenditure on the essential items such as Food & non-alcoholic beverages; Housing, water, electricity, gas and other fuels; and Communication registered a better growth during the quarter. Active online shopping activities of households has also supported the performance in private consumption.

The investment on fixed asset or known as Gross fixed capital formation (GFCF) contracted 11.9 per cent in the fourth quarter of 2020 due to the decline in all type of assets namely Structure, Machinery & equipment and Other assets. Trend of time series GFCF declined was observed since the first quarter of 2019. The GFCG plays a significant role in producing future national output. The reduction in GFCF may lead lower capacity for future production. The reduction in investments lead to a lower production capacity in the future and thus have implications for potential output. In the meantime, Government final consumption expenditure expanded to 2.7 per cent (Q3 2020: 6.9%) due to lower spending in supplies and services in fourth quarter 2020.

Referring to the international trade for this quarter, Net exports remained positive by registering 12.4 per cent which was stimulated by higher external demand where Exports recorded a better growth as compared to Imports. This has indirectly led to a trade surplus of RM184.8 billion in Malaysia’s economy for year 2020 with a total trade of almost RM2 trillion.

The implications of COVID-19 pandemic have affected economic activities which further contributed to the increase of the unemployment rate 4.8 per cent in the fourth quarter of 2020. Furthermore, the number of underemployed persons increased as compared to 2019. This scenario affects the disposable income which indicates a slowdown and indirectly led to a decrease of the Gross National Income (GNI) per capita from RM45,212 (2019) to RM42,531 in 2020. Meanwhile, movement control imposed by the government led to a reduction in domestic consumption expenditure.

The full publication of  Gross Domestic Product, Fourth Quarter 2020 can be downloaded through eStatistik portal. 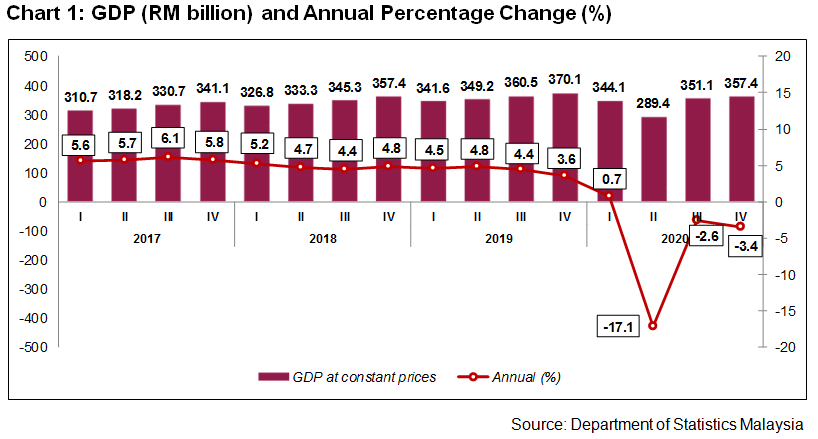 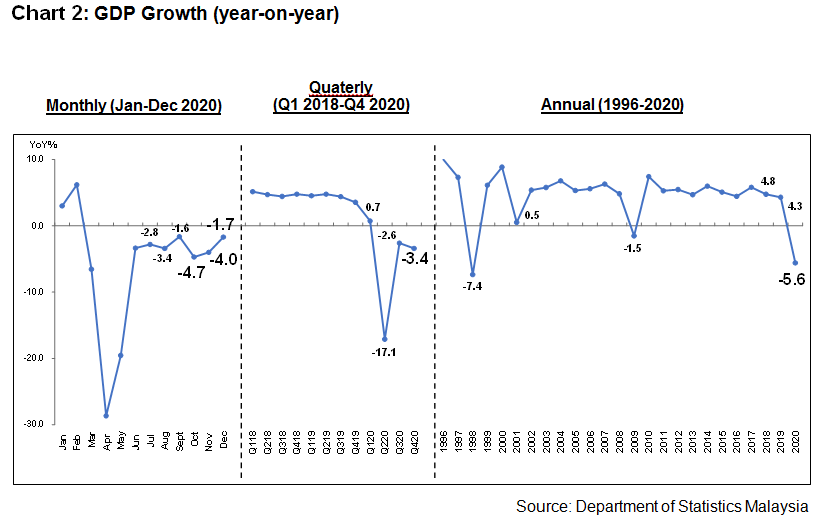 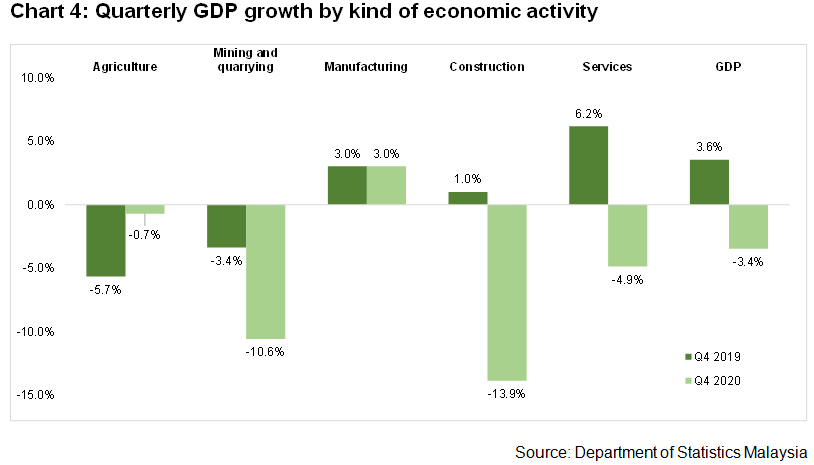 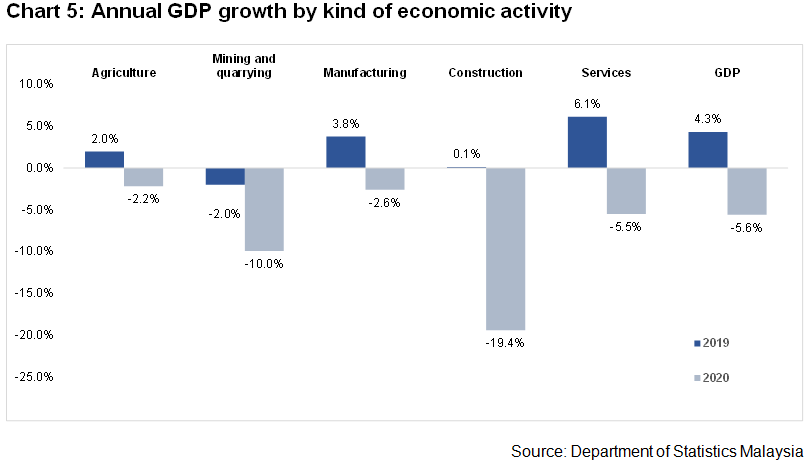 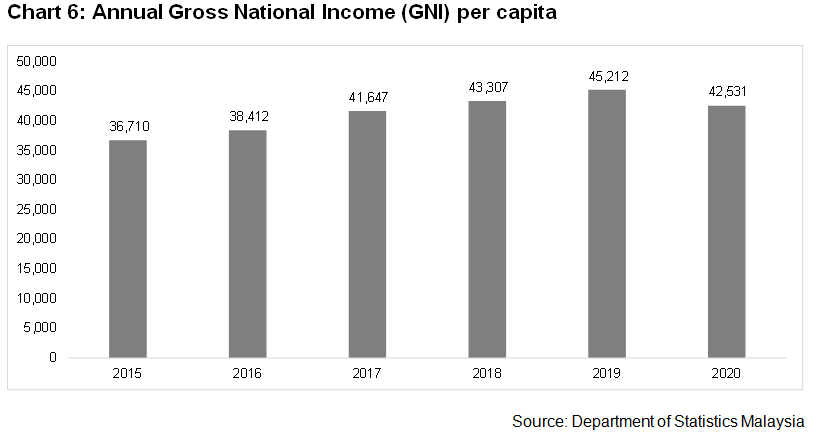