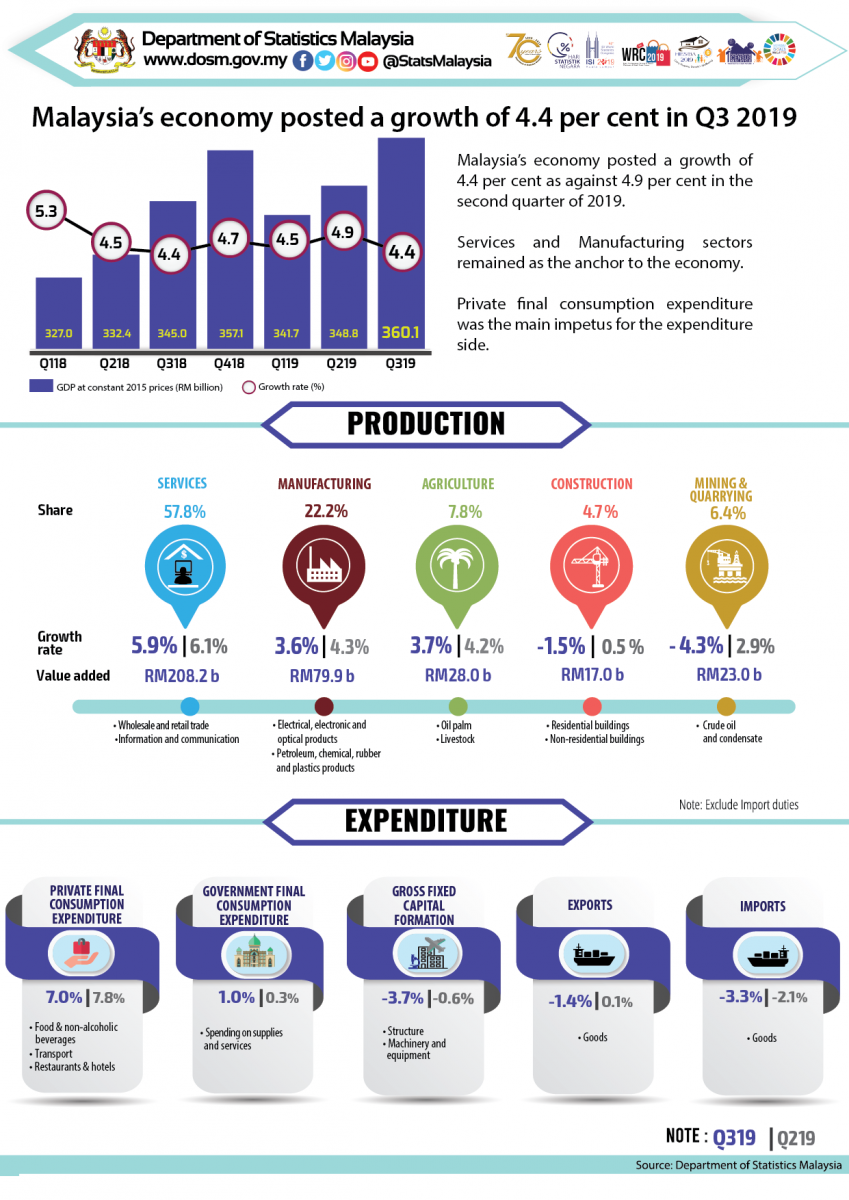 Performance of the economy

Services sector sustained by posting a growth of 5.9 per cent from 6.1 per cent in the previous quarter. The performance of Services sector was underpinned by Wholesale & retail trade and Information & communication sub-sectors.

Manufacturing sector grew at 3.6 per cent against 4.3 per cent in the previous quarter of 2019. The performance of this sector was supported by Electrical, electronic & optical products (3.1%), Petroleum, chemical, rubber & plastic products (2.9%) and Transport equipment, other manufacturing & repair (6.1%). Meanwhile, Agriculture sector registered a moderate pace at 3.7 per cent. The Oil palm which contributes the largest share in Agriculture grew 8.4 per cent slower than 9.5 per cent in the last quarter. Forestry & logging also slowed down the performance of Agriculture.

The Construction sector contracted 1.5 per cent in the third quarter of 2019, for the first time since the second quarter of 2011. The decreased was due to decline in Non-residential buildings (-12.0%) and Residential buildings (-3.2%). Mining and quarrying sector declined further to negative 4.3 per cent in this quarter, affected by reduction in production of crude oil & condensate and natural gas.

Private final consumption expenditure grew 7.0 per cent impelled by the consumption on Food & non-alcoholic beverages, Transport and Restaurants & hotels. Nevertheless, Gross fixed capital formation decreased to 3.7 per cent which remained in negative growth for three consecutive quarters. This is due to the deceleration in Structure and Machinery & equipment which fell to negative 2.4 per cent and negative 7.4 per cent respectively.

Malaysia’s current account recorded a surplus of RM11.5 billion as compared to RM14.3 billion in the previous quarter. This was led by surplus in Goods Account and lower deficit in Services Account, which was primarily backed by better performance in travel activities. Nevertheless, the overall narrower surplus was influenced by widening deficit in Primary Income due to higher dividend earned by foreign companies. For the period of January to September 2019, the surplus in current account reached RM42.1 billion.

Financial account in this quarter recorded net outflow of RM1.3 billion due to the higher outflow in portfolio investment.

The financial liabilities position in this quarter decreased to RM1,778.1 billion against RM1,800.3 billion in the previous quarter. At the same time, the total assets reduced to RM1,765.1 billion from RM1,780.8 billion in last quarter. This translated to the lower net liabilities of RM13.0 billion as at end of third quarter 2019.

The international reserves of Bank Negara Malaysia stood at RM431.2 billion as compared to RM425.4 billion in last quarter.

Malaysia’s exports of goods in the third quarter of 2019 recorded a decrease of 1.9 per cent to RM247.0 billion as compared to RM251.8 billion registered in the same period last year. The main products which attributed to the decrease were electrical & electronic products and crude petroleum that shrank by 4.9 per cent and 43.9 per cent respectively.

Leading Index which indicates the future direction of the economy in an average of four to six months anticipated that the Malaysia’s GDP will grow in fourth quarter of 2019.