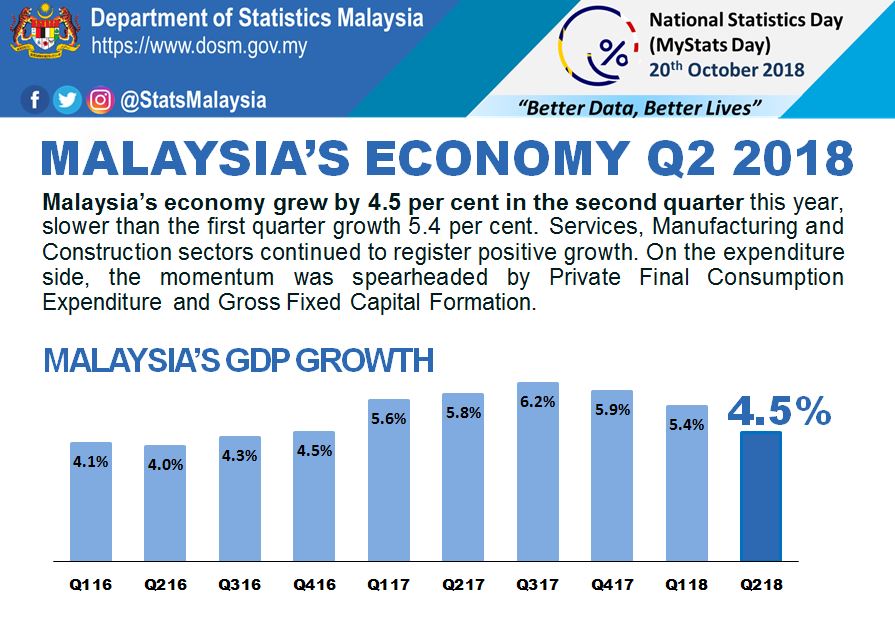 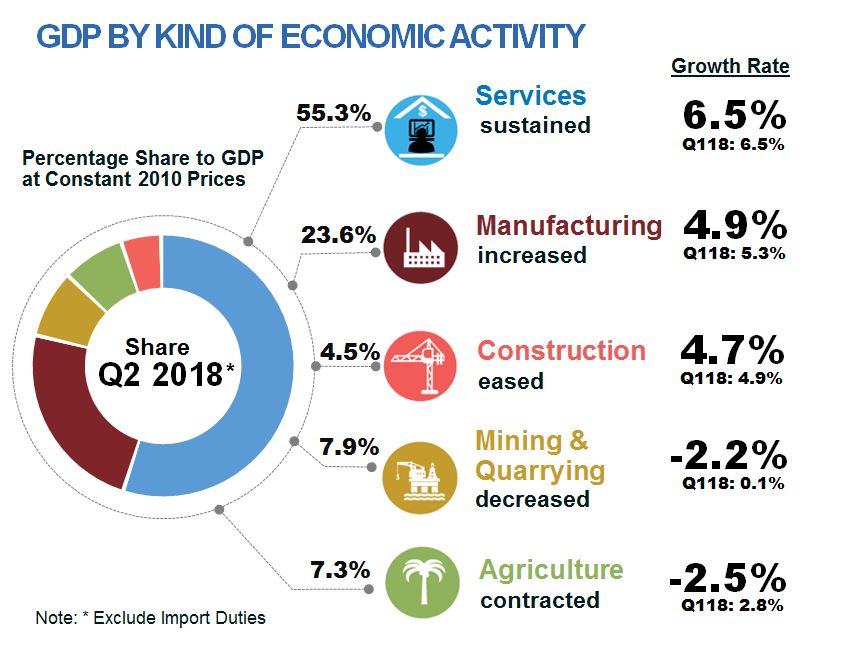 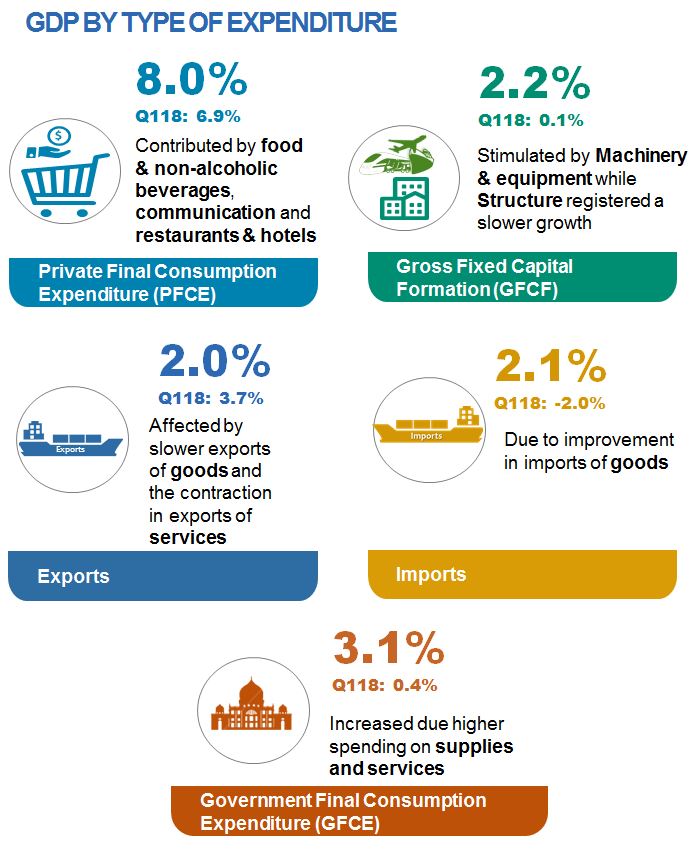 Malaysia’s economy grew by 4.5 per cent in the second quarter this year, slower than the first quarter growth 5.4 per cent. On a quarter-on-quarter seasonally adjusted, the GDP grew 0.3 per cent.

The declines in Agriculture and Mining & quarrying sectors have weighed down the overall performance of GDP. Nevertheless, the Services sector has supported the economic growth, while Manufacturing and Construction sectors continued to register favourable growth during the quarter. On the expenditure side, the momentum was spearheaded by the expansion in Private final consumption expenditure and Gross fixed capital formation. 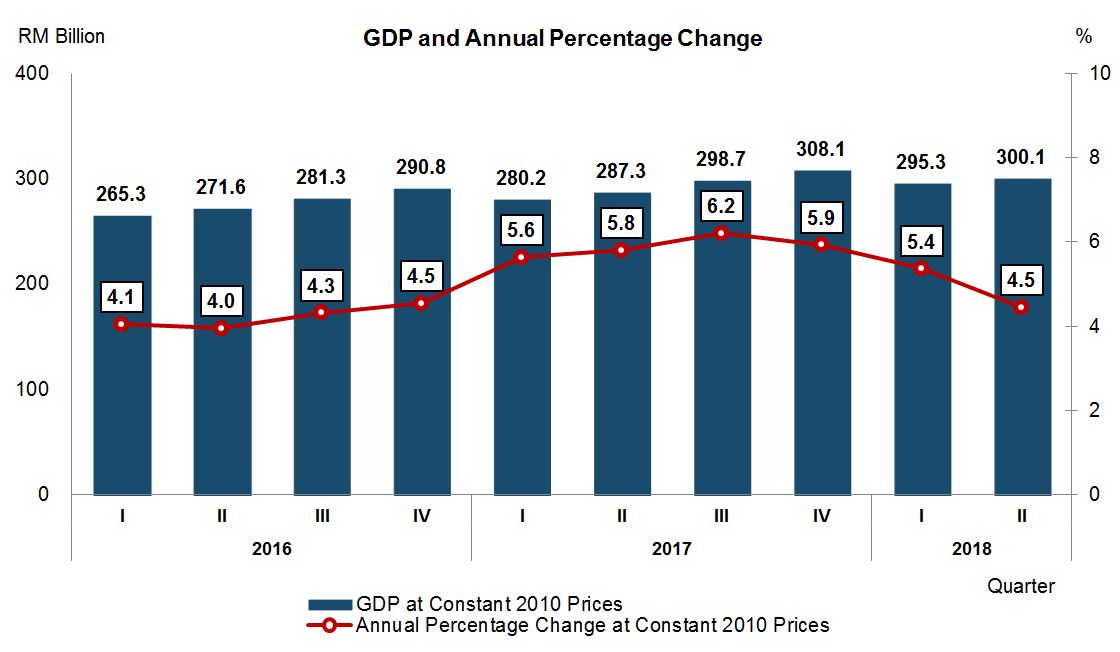 Services sector sustained at 6.5 per cent in this quarter. The growth in Services sector was underpinned by Wholesale & retail trade recorded a higher growth of 7.3 per cent fuelled by higher household’s spending. This was followed by the strong growth of Information & communication at 8.6 per cent, backed by data communication and computer services activities in line with 14th General Election and FIFA World Cup events. Meanwhile, Business services recorded a favourable performance at 9.1 per cent, the highest growth since the fourth quarter of 2014. The growth was supported by Professional services.

Manufacturing sector grew moderately at 4.9 per cent as compared to 5.3 per cent in the previous quarter. The growth for this sector was supported by Electrical, electronic & optical products which increased to 6.2 per cent. This was mainly contributed by electronics components, machinery & equipment and computer & peripheral equipment. Nevertheless, Vegetable and animal oils & fats and food processing registered a slower growth of 4.1 per cent due to the decline in oil palm production.

Private final consumption expenditure (PFCE) rose to 8.0 per cent driven by higher consumption on Food & beverages, Communication and Restaurants & hotels. Few key events such as fasting month, Hari Raya Aidilfitri and zerorization of Goods & Services Tax (GST) in this quarter have played a role in the expansion of PFCE.

Gross Fixed Capital Formation (GFCF) grew at 2.2 per cent from a marginal growth of 0.1 per cent in the previous quarter. The better growth in GFCF was stimulated by Machinery & equipment which rebounded to 3.6 per cent from negative growth in previous quarter. Meanwhile, Structure registered a slower growth of 2.1 per cent in tandem with the performance of the Construction sector. Overall, GFCF was mainly supported by Private sector instead of Public sector.

In line with GDP performance, Malaysia’s current account surplus narrowed to RM3.9 billion compared to RM15.0 billion in the previous quarter. The last lower surplus was recorded in Q2 2016 with a value of RM3.1 billion. The lower surplus was largely attributable to the lower net exports of goods as the imports strengthened by RM9.9 billion to record RM176.4 billion, while exports increased modestly from RM202.1 billion to RM202.4 billion in the current quarter. In addition, the larger deficit in primary income, due to higher dividend payments to foreign investments, also resulted to the lower surplus. 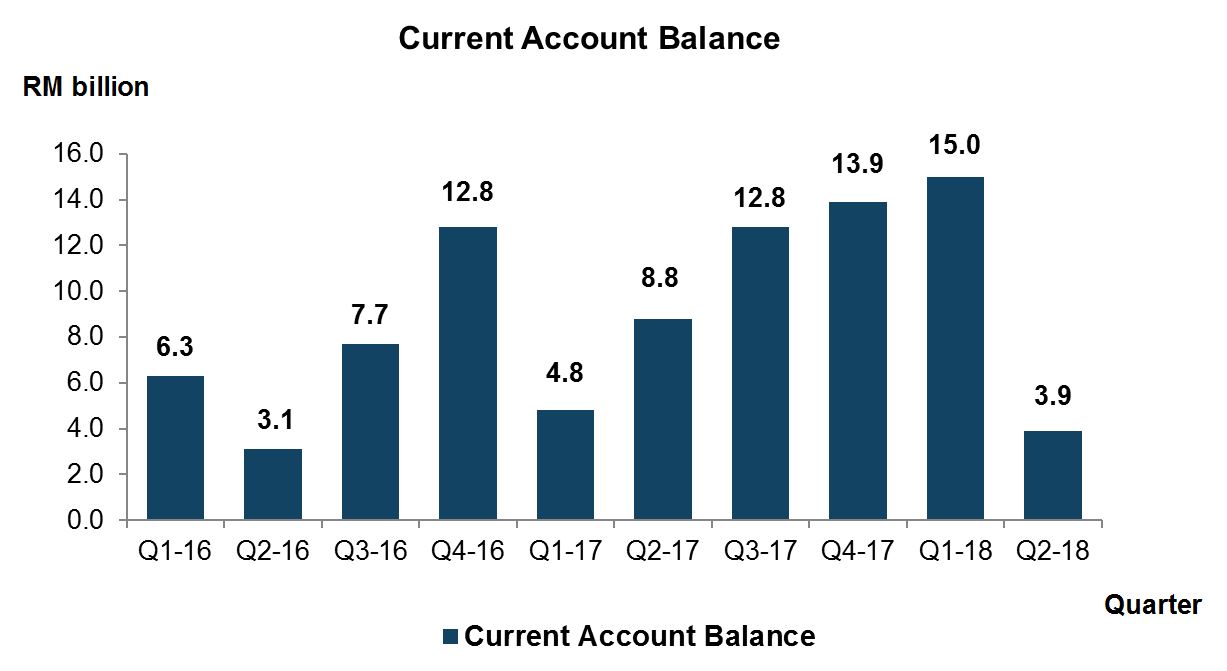 The financial account recorded a lower net inflow of RM9.2 billion from RM15.2 billion in the first quarter of 2018. Foreign Direct Investment (FDI) dropped from RM12.0 billion in the previous quarter to RM2.8 billion in Q2 2018. The FDI were mainly from Hong Kong, United Kingdom and United States of America. Meanwhile, Direct Investment Abroad (DIA) improved to RM3.6 billion from RM1.3 billion in Q1 2018, and the investments were mainly to Indonesia, Netherlands and India.

Portfolio investment registered a higher net outflow of RM38.3 billion from RM2.6 billion recorded in the previous quarter. This huge outflows was due to foreign net sell-off Malaysian debt securities of RM29.2 billion this quarter (Q1 2018: an inflow of RM0.9 billion). Meanwhile, other investment recorded a higher net inflow of RM48.4 billion from RM6.4 billion in last quarter.

The financial liabilities position in this quarter increased to RM1,762.7 billion as against RM1,741.4 billion in previous quarter. Meanwhile, total asset was RM1,683.0 billion from RM1,670.1 billion. This translated to the higher net liabilities of RM79.7 billion as at end of second quarter 2018.

The international reserves of Bank Negara Malaysia stood at RM423.3 billion compared to RM416.3 billion in the previous quarter.

Exports of goods in the second quarter of 2018 were valued at RM245.0 billion recording a growth of 8.2 per cent. The main products which contributed to the increase were electrical and electronic (E&E) products which advanced 9.8 per cent or RM8.1 billion to RM90.9 billion followed by refined petroleum products which rose strongly by 25.9 per cent and crude petroleum with a robust 31.2 per cent increase.

Meanwhile, two other major export products namely palm-oil & palm-oil based products which decreased by 12.0 per cent and LNG which fell 5.1 per cent.

In the second quarter of 2018, imports rebounded and grew 7.7 per cent to RM217.8 billion, after the contraction of 0.8 per cent in the preceding quarter. Capital goods recorded an increase while intermediate and consumption goods were both lower.

Capital goods which representing 12.7 per cent of total imports, rose RM1.5 billion or 5.7 per cent to RM27.7 billion due to the increase of RM2.4 billion or 95.6 per cent in industrial transport equipment.

Consumer Price Index (CPI) in second quarter eased to 1.3 per cent. The zerorization of GST and the Implementation of Price Control Scheme for 22 selected items have influenced the slower CPI growth.

Producer Price Index decreased to 0.4 per cent as compared 2.3 per cent in first quarter of 2018. The decrease was mainly due to the lower prices of goods in Agriculture, forestry & fishing (-8.8%). Average prices of Crude palm oil recorded RM2,386 per tonne as compared to RM2,462 per tonne registered in the previous quarter.

The employment for this quarter increased 2.4 per cent to 14.8 million persons which was dominated by Employees and Own account workers. Based on the Labour Force Survey, the rise of employment in this quarter was also contributed by those who worked less than 30 hours a week.

The Leading Index had indicated a lower growth of GDP for the second quarter of 2018 compared to the first quarter.