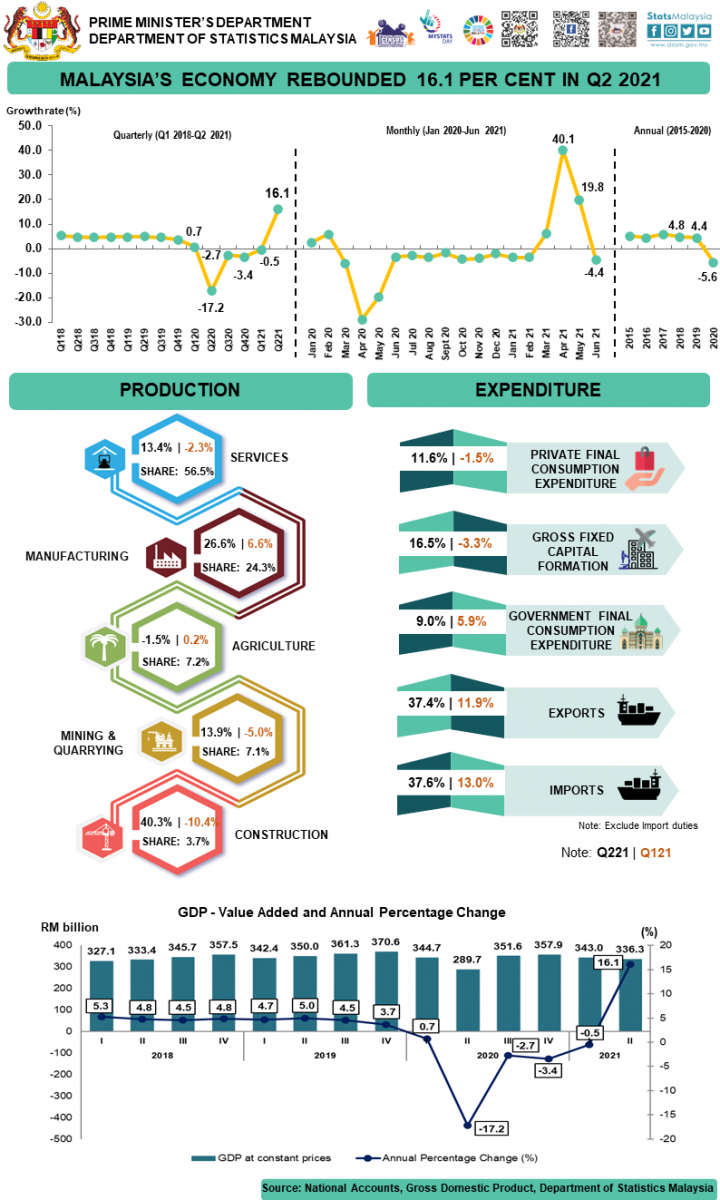 Malaysia’s GDP increased 16.1 per cent in the second quarter of 2021 after four consecutive quarters of contraction. However, the strong growth for this quarter was also attributed to the low base recorded in the second quarter of 2020. On a quarter-on-quarter seasonally adjusted basis, GDP contracted 2.0 per cent from 2.7 per cent in the preceding quarter. Based on growth recorded, the level of economic value in this quarter remained lower than the pre-pandemic level of fourth quarter 2019. In terms of monthly GDP performance, April and May rose to 40.1 per cent and 19.8 per cent respectively. As for June, GDP dropped 4.4 per cent influenced by a total lockdown nationwide with tightened Standard Operating Procedure (SOP) and only essential services were allowed to operate. Hence, Malaysia’s economy grew by 7.1 per cent in the first half of 2021 (1H 2020: -8.4%).

The economic performance in the second quarter of 2021 was supported by the continuous growth in Manufacturing sector and the rebound of Services sector on the supply side. Meanwhile on the demand side, the growth was influenced by the expansion in households consumption and favorable growth in net exports. Furthermore, fixed assets investment also rebounded in this quarter after recorded nine consecutive quarters of contraction.

The Services sector which was the main contributor to Malaysia’s economy, grew 13.4 per cent in the second quarter of 2021 compared to a decline of 2.3 per cent in the first quarter of 2021. The performance was driven by the Wholesale and retail trade sub-sector which continued to expand at a stronger pace of 21.0 per cent (Q1 2021: 1.2%) followed by the higher growth in Finance & insurance (23.3%) and Transportation & storage (37.2%) sub-sectors. Information and communications sub-sector grew 5.9 per cent as against 6.3 per cent in the previous quarter. Meanwhile, the Food & beverage and accommodation sub-sector expanded 9.1 per cent from a decline of 29.8 per cent in the preceding quarter. On a quarter-on-quarter basis, the overall Services sector declined 3.5 per cent (Q1 2021: -4.8%).

The Manufacturing sector grew at a faster rate of 26.6 per cent (Q1 2021: 6.6%) in the second quarter of 2021, but on a quarter-on-quarter basis this sector recorded a marginal declined 0.1 per cent. The growth of Manufacturing sector was driven by Petroleum, chemicals, rubber & plastics products (28.0%) and Electrical, electronic & optical products (26.3%) which also reflected in the strong growth in exports of goods recorded in this quarter. The higher growth was also attributed by the increased in Transport equipment, other manufacturing & repair (41.6%) and Non-metallic mineral products, base metals and fabricated metal products (33.5%).

The Mining & Quarrying sector recorded a double-digit growth of 13.9 per cent (Q1 2021: -5.0%) in the second quarter of 2021. The increase was supported by the improvement in Natural gas and Crude oil & condensate sub-sectors which registered a growth of 21.9 per cent and 4.9 per cent respectively. Meanwhile, the quarter-on-quarter performance recorded a decrease of 0.5 per cent.

On the other hand, the Agriculture sector dipped 1.5 per cent as compared to a marginal growth of 0.2 per cent in the first quarter of 2021. The decrease was mainly influenced by the decline in Oil palm (-10.9%) sub-sector. Meanwhile, the Other agriculture and Livestock sub-sectors expanded further at 6.0 per cent and 6.3 per cent respectively.

On the expenditure side, all components of expenditure registered positive growth in the second quarter of 2021 anchored by Private final consumption expenditure and Gross fixed capital formation.

Private final consumption expenditure which contributed 55.0 per cent of GDP in the second quarter of 2021, increased 11.6 per cent (Q1 2021: -1.5%) attributed to the higher consumption in Transport, Food & non-alcoholic beverages and Communication. The exceptionally higher consumption of Transport was attributed to the higher purchase of motor vehicles in the first two months of the quarter by households compared to the same period of last year. Furthermore, Furnishing, household equipment & routine household maintenance and Restaurants & hotels which were non-essential expenditure also registered positive growth during the quarter in line with the hitched up in Services sector. On a quarter-on-quarter basis, the overall performance of Private final consumption expenditure posted a decrease of 11.5 per cent.

Gross fixed capital formation (GFCF) or investment on fixed assets grew 16.5 per cent (Q1 2021: -3.3%) after recorded a contraction for the past nine quarters. The growth of GFCF was supported by a double-digit growth of Structure and Machinery & equipment in this quarter. The gradual improvement of GFCF can be seen as a catalyst for higher economic capacity to uplift the production of the future output. GFCF registered a decrease of 2.7 per cent on a quarter-on-quarter performance.

The Government final consumption expenditure further expanded to 9.0 per cent (Q1 2021: 5.9%) supported by higher spending on supplies and services attributed to the health-related expenditure in this quarter.

The short-term economic indicator, Leading Index (LI) for May 2021 signals that the Malaysian economy is anticipated to face challenges in preserving the recovery momentum. The acceleration of vaccination programme by the National COVID-19 Immunisation Programme (PICK) and the various initiatives such as Pakej Pelindungan Rakyat dan Pemulihan Ekonomi (PEMULIH) and National Recovery Plan announced by the Government may boost up the households and business confidence to stimulate economic activity and social stability. The transition and adaptation of technological advancement and digitalisation in businesses such as e-commerce is vital to steer up Malaysia’s economy and competitiveness. Recent data shows that, income from e-commerce transactions rose to 23.3 per cent in the second quarter 2021 with RM267.6 billion mainly driven by Manufacturing and Services sectors.

The full publication of  Gross Domestic Product, Second Quarter 2021 can be downloaded through  eStatistik portal. 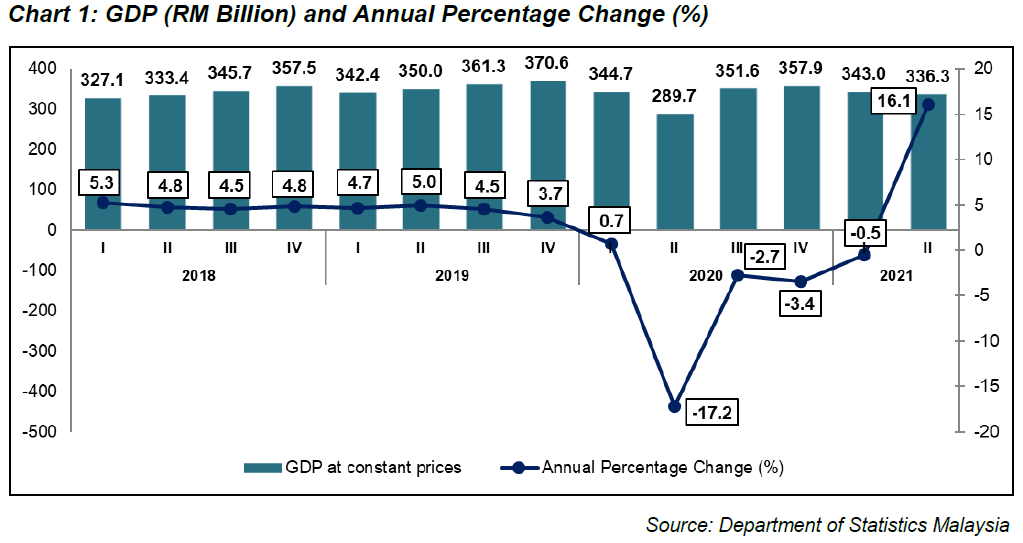 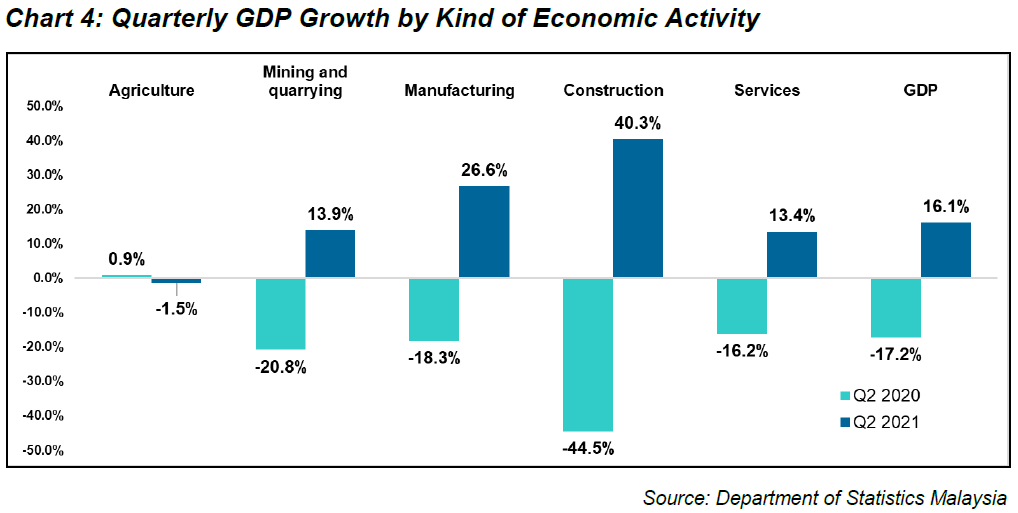