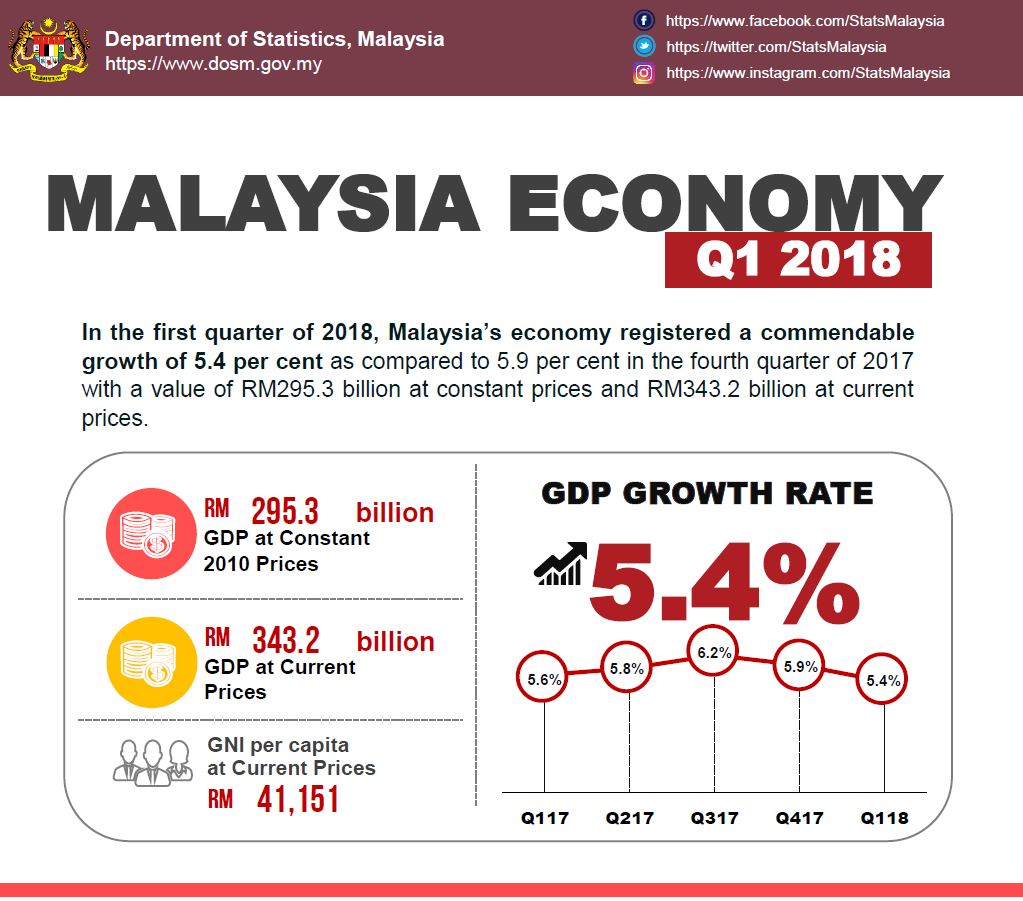 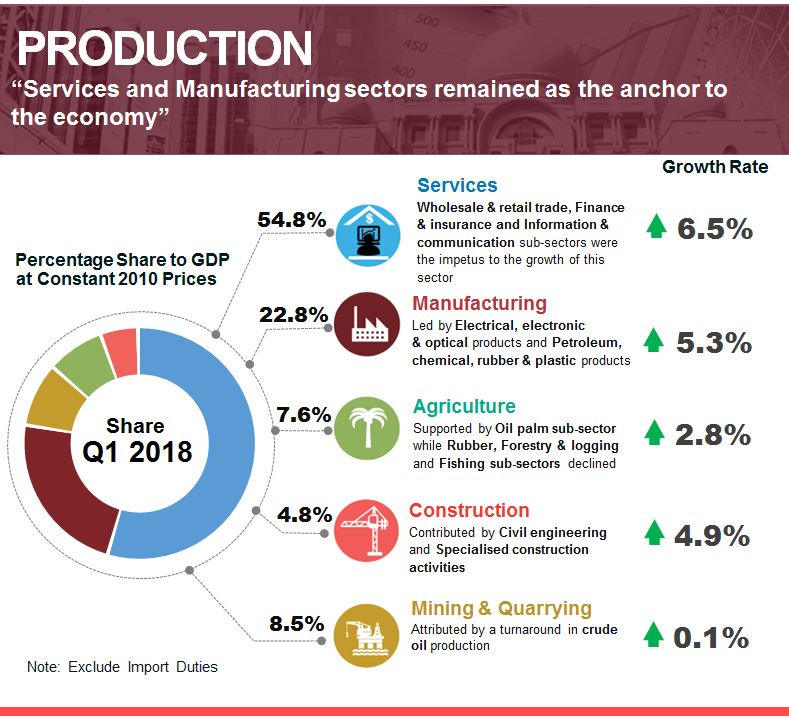 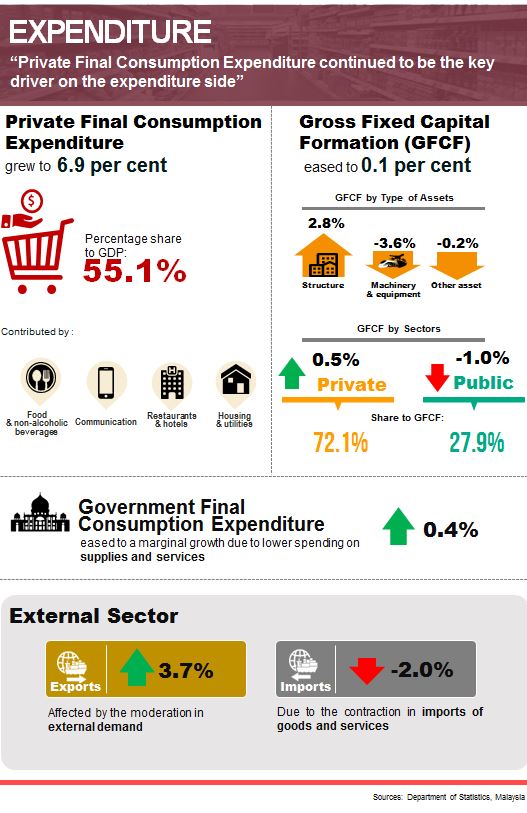 All sectors  posted  a positive  growth  with  a turnaround  in Mining  and  quarrying  sector.  Services  and  Manufacturing  sectors remained  as  the  anchor  to  the  expansion  in  the  first  quarter  of  2018. On the expenditure side, Private Final Consumption Expenditure and net exports were the key drivers.

During the period, Malaysia’s GDP recorded a value of RM295.3 billion at constant prices and RM343.2 billion at current prices.

Services  sector  stepped  up to 6.5  per  cent  from  6.2  per  cent  in the preceding  quarter.    Wholesale  & retail  trade,  Finance  & insurance  and  Information  &  communication  sub-sectors  were  the  impetus  to  the  growth  of  Services  sector  in  this  quarter. Wholesale, retail trade and motor vehicle grew 6.8 per cent supported by wholesale and retail segment. However, motor vehicles contracted 0.5 per cent in this quarter.  Meanwhile, Finance & insurance sub-sector rose to 7.5 per cent, the strongest growth since Q4 2012 contributed by both Finance and Insurance which expanded to 6.7 per cent (Q4 2017: 5.0%) and 9.8 per cent    (Q4 2017: 7.8%) respectively. Information & communication increased to 8.3 per cent from 8.1 per cent in the previous quarter.

Manufacturing sector continued a positive momentum albeit at a moderate pace of 5.3 per cent as compared to 5.4 per cent in the preceding quarter. The growth for Manufacturing sector  was  led by  a steady  momentum  in  Electrical,  electronic  &  optical products at 6.0 per cent as compared to the fourth quarter growth of 5.7 per cent. Moreover, Petroleum, chemical, rubber & plastic products rose to 5.0 per cent (Q4 2017: 4.5%) supported by refined petroleum products and chemical products.

Construction sector grew 4.9 per cent (Q4 2017: 5.9%), while quarter-on-quarter seasonally adjusted registered an increase of 1.5 per cent from 0.5 per cent. Civil engineering posted an impressive growth of    15.4    per cent, the highest growth since fourth quarter of 2016. The strong momentum was mainly geared by transportation and utilities related projects. Specialised construction activities recorded growth of 7.3 per cent from 8.6 per cent in the preceding quarter.

Private Final Consumption Expenditure grew 6.9 per cent (Q4 2017: 7.0%), while on a quarter-on-quarter seasonally adjusted increased to 2.0 per cent. The growth was contributed by the consumption on food & non-alcoholic beverages, communication, restaurants & hotels and housing & utilities.

Gross Fixed Capital Formation (GFCF) eased to 0.1 per cent from 4.3 per cent in the previous quarter. The slower momentum in GFCF was due to the deceleration in Machinery & equipment (-3.6%) as well as Other asset (-0.2%). Nevertheless, Structure increased 2.8 per cent as compared to 3.3 per cent in the last quarter, in parallel with the growth of Construction sector.

Exports recorded a growth of 3.7 per cent while Imports registered a negative growth of 2.0 per cent due to the contraction in imports of goods and services.

Producer Price Index decreased to 2.3 per cent as compared 3.1 per cent in fourth quarter of 2017. The decrease was mainly due to the lower prices of goods in Agriculture, forestry & fishing (-13.1%). Average prices of Crude Palm Oil recorded RM2,462 per tonne as compared to RM2,628 per tonne registered in the previous quarter.

The current account balance recorded a value of RM15.0 billion as compared to RM13.9 billion in the fourth quarter of 2017. The highest surplus in current account was contributed by goods account with a surplus of RM35.7 billion while the deficit in the services account narrowed to RM5.8 billion (Q4 2017:  deficit RM7.0 billion). This high surplus was last recorded in second quarter of 2014.

The better performance of current account balance was attributed to the goods account. In this quarter, exports of goods was valued at RM237.6 billion, a growth of 5.8% on a year-on-year (y-o-y) basis. The main products which contributed to the increase were electrical and electronic (E&E) products which has the highest share in total exports at 37.1%, rising 1.8% to RM88.1 billion followed by crude petroleum ( 3.6% share of total exports) which expanded by 8.0% to RM8.5 billion.

In the first quarter of 2018, imports decreased 0.8% to RM204.3 billion on a y-o-y basis, compared to 14.4% growth in the preceding quarter. Consumption goods recorded an increase while intermediate and capital goods decreased.

Consumption Goods which accounted for 8.2% of total imports recorded an increase of RM383 million (+2.3%) to RM516.8 billion. The main component contributing to the rise was food & beverages, mainly for household consumption (+RM320 million, +2.3%).

In total economy, Compensation of Employees contributed 35.3 per cent while Gross Operating Surplus constituted 59.5 per cent. The remaning 5.2 per cent was net indirect taxes.

During this quarter, the unemployment rate dropped slightly to 3.3 per cent from 3.4 per cent in previous quarter