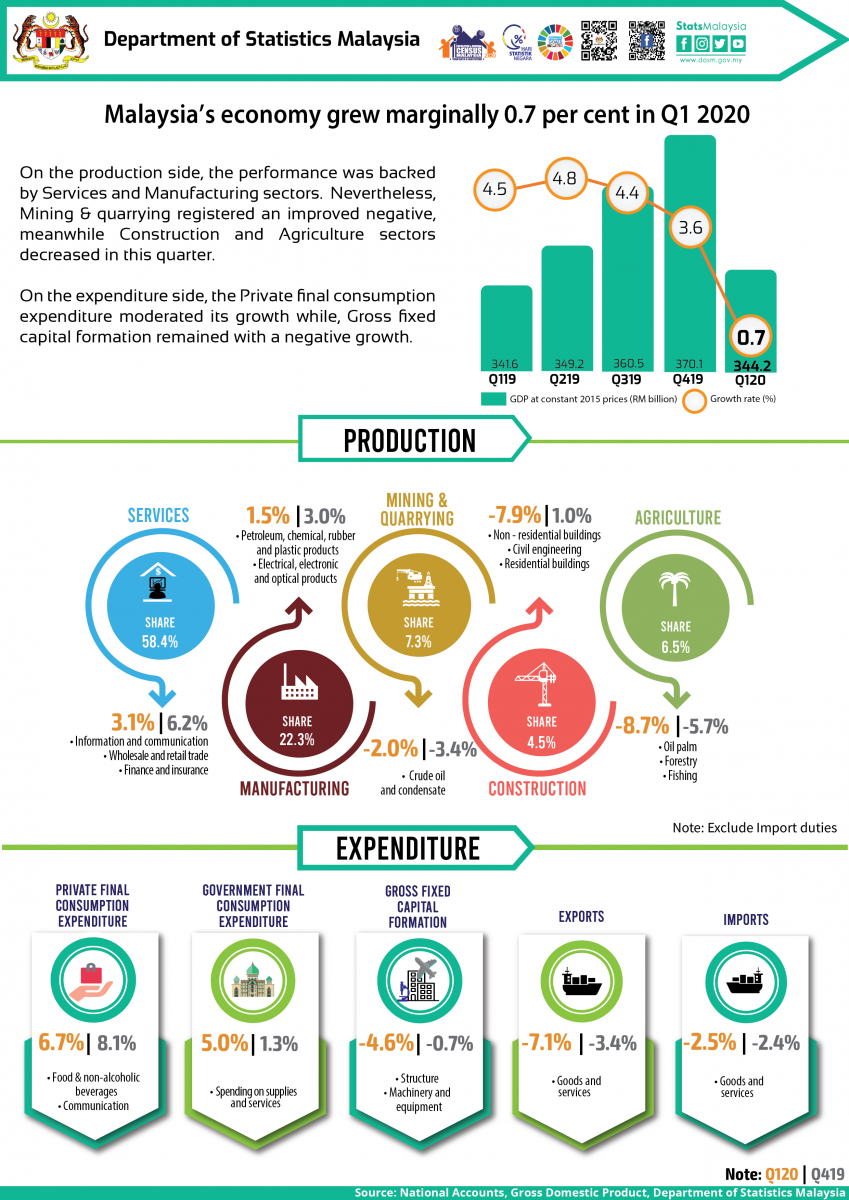 Malaysia’s GDP grew at 0.7 per cent from 3.6 per cent in the fourth quarter of 2019. This is the lowest growth recorded since the third quarter of 2009, negative 1.1 per cent.  The growth in this quarter was supported by Services sector 3.1 per cent and Manufacturing 1.5 per cent, while the other sectors registered negative growth. Private final consumption expenditure in this quarter was on essential products such as Food & non-alcoholic beverage, Communication and Housing, water, electricity & other fuels. However, household consumption reduced in Petrol, Travel, Recreation and outside food consumption. The lower expenditure by household has directly affected the industries related to food & beverage, accommodation, transportation, sport and recreations.  This is due to the inter-connection between the consumption and production of goods and services.

Malaysia’s economy value of RM1.4 trillion and being one the main trading country with an annual trade value of RM1.9 trillion, will definitely be affected by the global economic performance.

The value of Tourism sector for our country which is measured through the Tourism Satellite Account contributed 15.2 per cent to the economy with a value of RM220.6 billion and employed 3.5 million people. He is also explained there are 194 industries involved in the chain of the tourism sector. Thus, the spread of Covid-19 has unenviably impacted the tourism sector. Our exports to China also has begun to reduce severely beginning January 2020. Hence, simultaneously the services exports also shown a decreasing trend due to the decline in tourist arrivals to our country.

The decrease in Agriculture sector was mainly due to the decline in Oil Palm, Forestry & logging, Fishing and Rubber. Oil palm sub-sector further declined 22.0 per cent (Q4 2019: -16.9%) due to a contraction in the production of Crude Palm Oil (CPO).

The Mining & Quarrying sector attained a smaller negative of 2.0 per cent in this quarter (Q4 2019: -3.4%) due to the improved production in Crude & condensate and Natural gas. Construction sector contracted 7.9 per cent from 1.0 per cent in the preceding quarter and this was the lowest growth since second quarter of 1999 (-7.9%).

On the demand side, Private final consumption expenditure moderated to 6.7 per cent (Q4 2019: 8.1%). Meanwhile, Gross fixed capital formation posted a negative 4.6 per cent (Q4 2019: -0.7%) due to the sharp decline in all three segments such as Structure, Machinery & equipment and Other assets.

Based on the analysis in accordance to the System of National Accounts, produced by United Nations, World Bank and IMF, Malaysian Economy could have attained a higher economic growth in the absence of Covid-19. It is expected the growth of Malaysian economy in the first quarter to be in the range of 3.9 per cent to 4.2 per cent. With this, it is estimated the loss of RM22.8 billion in economic output for this quarter.

Malaysia’s Current Account Balance (CAB) recorded a surplus of RM9.5 billion in the first quarter of 2020 led by the surplus in Goods account and the smaller deficit in Primary income whereby foreign companies in Malaysia earned lower income of RM16.3 billion as compared to RM25.1 billion in the previous quarter.

On the other hand, Services account registered a wider deficit at RM8.0 billion mainly caused by the gloomy travel activities which was hit hard by deadly COVID-19 outbreak began late December 2019 in Wuhan, China, eventually led to global health and economic crisis. Travel recorded a lower surplus of RM2.1 billion in the first quarter of 2020, the lowest since third quarter of 2003 due to SARS epidemic.

Nevertheless, some components of Services account such as Telecommunications, computer and information and Other business services performed well in this quarter despite of this crisis.

Financial account registered a higher net outflow of RM13.3 billion in the first quarter of 2020 as compared to RM0.1 billion in previous quarter. This was primarily contributed by higher outflow in Portfolio investment due to redemption upon maturity and selling off debt securities by non-residents

Foreign Direct Investment (FDI) expanded to RM6.4 billion from RM5.4 billion in the previous quarter. The FDI were mainly from USA, Singapore and Ireland in Manufacturing, Financial and insurance; and Mining and quarrying. In the same time, Direct Investment Abroad (DIA) also increased from RM1.1 billion in the fourth quarter of 2019 to RM3.0 billion this quarter. The main destinations of DIA were UK, Indonesia and Canada which channelled to Mining and quarrying, Information and communication; and Agriculture sectors.

Malaysia’s export of goods in the first quarter 2020 was valued at RM238.7 billion, increased by 1.1 per cent compared to RM236.1 billion in the same period last year. Main products contributed to the growth were refined petroleum products and palm oil & palm oil-based products which increased by 43.0 per cent and 4.6 per cent respectively.

During the same quarter of 2020, imports also increased by 1.3 per cent to RM201.7 billion. By end-use category, imports of intermediate goods increased by 8.1 per cent followed by consumption goods (+4.8%). However, imports of capital goods declined by 26.8 per cent.

The near-term economic direction can be portrayed by the Leading Index (LI). The LI performance for the reference month of February 2020 expects Malaysia will experience a slower economic growth in the second quarter of 2020 following the COVID-19 pandemic that engulf Malaysia from 23rd January 2020 to date. This is supported by the downward movement under the long-term trend of LI beginning reference month of December 2019.

In line with the higher requirement for statistics to monitor the socio economy in facing the economic crisis, DOSM is in the midst of preparing new and latest statistics at more detailed level and at small areas. DOSM is also planning to produce GDP flash estimates to faciliate in measuring the economy in advance based on the monthly indicators and statistics produced by the Department. In this regards, the cooperation of data sharing from all relevant parties is very much needed for the purpose of national statistics. Hope this enables the country to come out from the crisis ealier and to achieve a higher socio economic well-being.