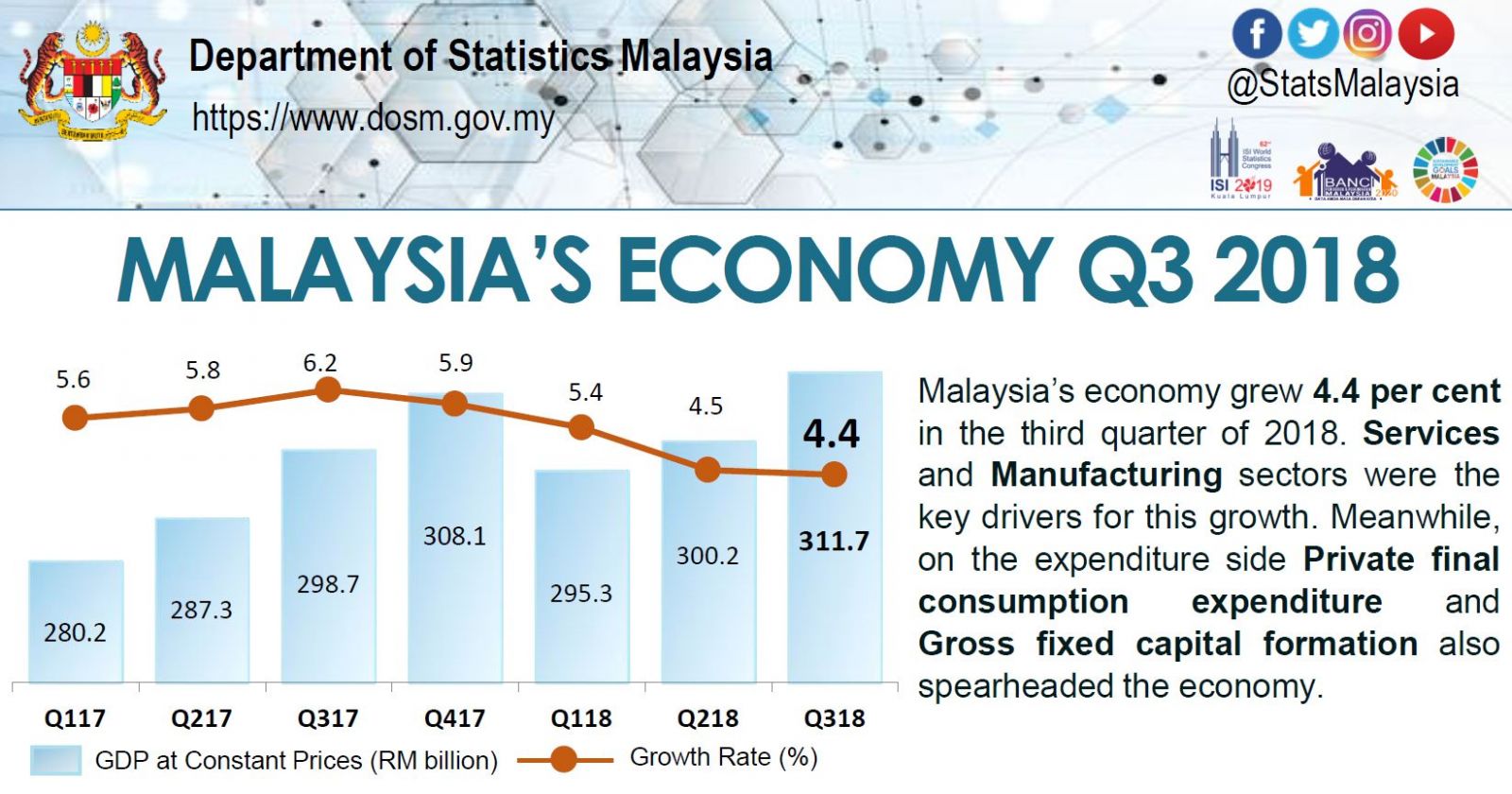 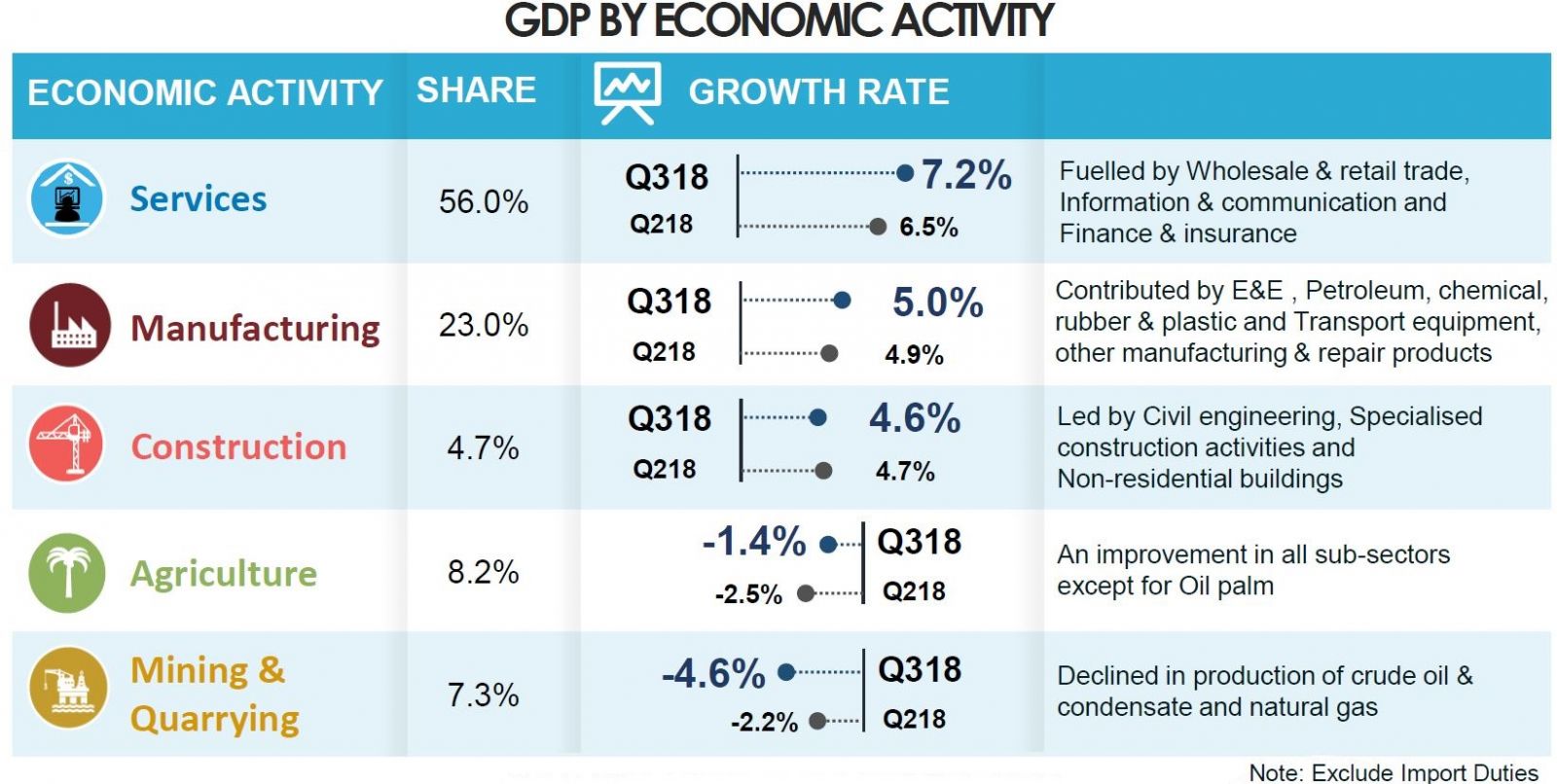 Services and Manufacturing sectors were the key drivers for this growth. Meanwhile, on the expenditure side Private final consumption expenditure and Gross fixed capital formation also spearheaded the economy. Nevertheless, the negative growth in Mining & quarrying and Agriculture sectors influenced the overall performance of GDP.

For the first three quarters of 2018, Malaysia’s GDP moderated to 4.7 per cent with a value of RM907.2 billion at constant prices and RM1,055.2 billion at current prices. 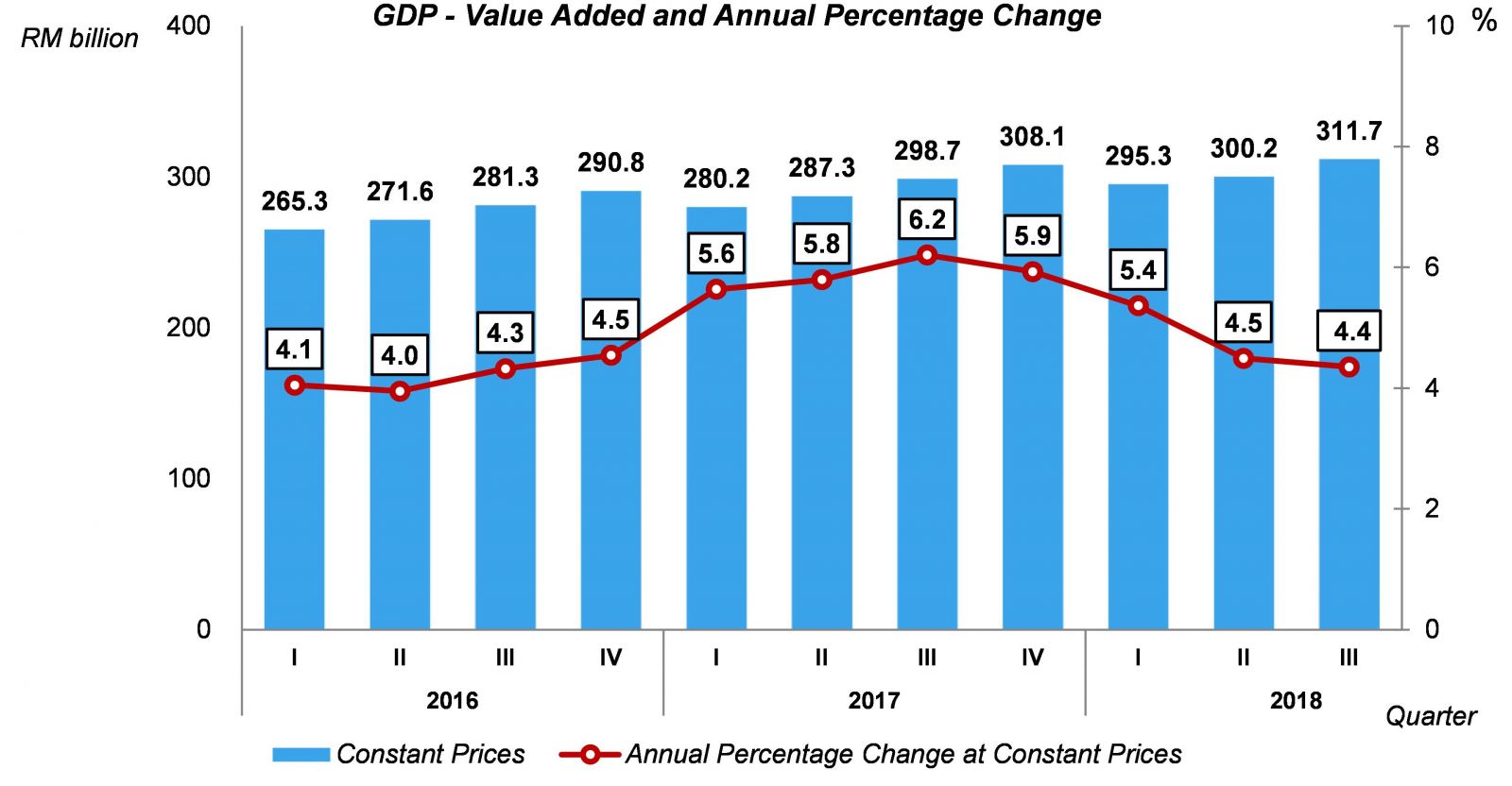 Services sector elevated further to 7.2 per cent and remained as the largest contributor to the economy. The expansion of this sector was fuelled by the strong momentum in Wholesale & retail trade and Information & communication. Wholesale & retail trade registered a higher growth of 9.5 per cent reflecting the outstanding performance in retail and motor vehicle. Furthermore, Information & communication posted a growth of 8.4 per cent contributed by communication and computer services activities. Meanwhile, Finance & insurance rose to 6.3 per cent from 4.9 per cent following a better growth performance in Finance and continued double digit growth in Insurance.

Manufacturing sector increased 5.0 per cent from 4.9 per cent in the previous quarter. The growth was mainly contributed by Electrical, electronic & optical products which strengthened to 6.4 per cent. Petroleum, chemical, rubber & plastic products registered a growth of 3.9 per cent supported by refined petroleum, rubber and plastic products. In addition, the overall performance of Manufacturing sector was also spurred by Transport equipment, other manufacturing & repair which increased to 8.0 per cent.

Gross Fixed Capital Formation (GFCF) increased 3.2 per cent as compared to 2.2 per cent in the previous quarter. The main contributor was Machinery & equipment which recorded a growth of 5.9 per cent in this quarter. Meanwhile, Other asset posted a marginal growth of 0.1 per cent after registering a negative momentum for three consecutive quarters.  In overall, GFCF was mainly supported by Private sector.

Malaysia’s current account surplus recorded RM3.8 billion as compared to RM3.9 billion in the previous quarter. The slightly lower surplus was largely attributable to the widening deficit in net primary income due to higher retained earnings by the foreign investors. 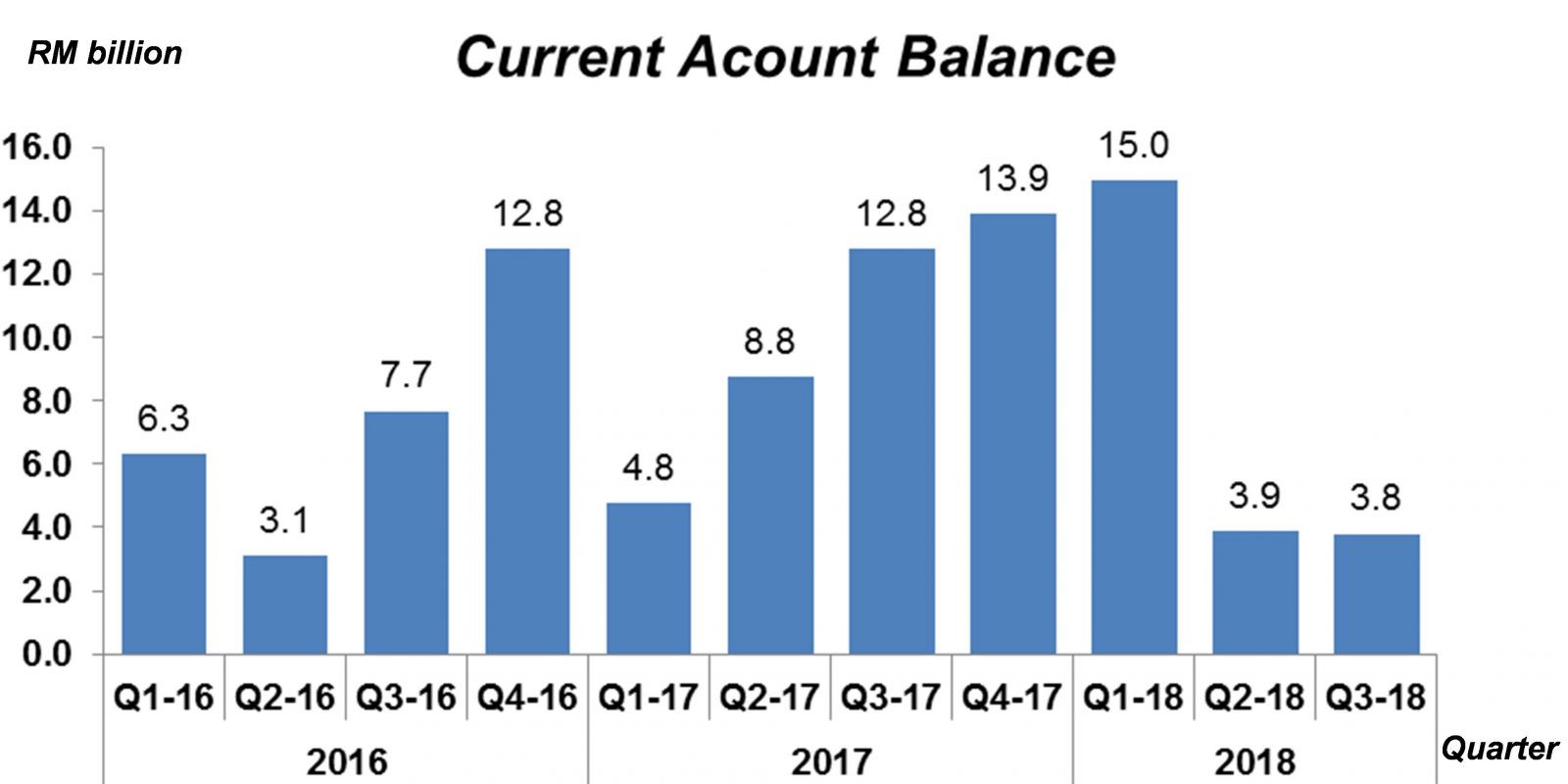 The financial liabilities position in this quarter increased to RM1,811.0 billion against RM1,762.7 billion in the previous quarter. Meanwhile, total assets recorded RM1,698.9 billion from RM1,683.0 billion in the second quarter. This translated to the higher net liabilities of RM112.2 billion as at end of third quarter 2018.

The international reserves of Bank Negara Malaysia stood at RM426.9 billion as compared to RM423.3 billion in the previous quarter.

Exports of goods in the third quarter of 2018 were valued at RM251.0 billion recording a growth of 5.2 per cent. The main products which contributed to the increase were electrical and electronic products which advanced 10.7 per cent or RM9.6 billion to RM99.4 billion followed by crude petroleum which rose strongly 70.6 per cent and refined petroleum products increased 2.8 per cent.

In the third quarter of 2018, imports also registered an increase of 6.3 per cent to RM225.8 billion. Both consumption goods and capital goods increased while intermediate goods decreased.

Consumption goods which accounted for 8.4 per cent of total imports expanded by RM980.1 million to RM18.9 billion. The expansion was mainly attributed to durables, semi-durables and non-durables.

Intermediate Goods which constituted 53.4 per cent of total imports dropped RM1.8 billion to RM120.6 billion. The decrease was mainly attributed to parts & accessories of capital goods.

Consumer Price Index in third quarter eased to 0.5 per cent as compared to 1.3 per cent in second quarter 2018.  Food & Non-Alcoholic beverages recorded a marginal increase of 0.5 per cent due to the tax holiday in this quarter.

In the third quarter of 2018, the Producer Price Index increased 0.1 per cent as compared to negative 0.4 per cent in second quarter 2018. The increase was mainly attributed to the higher prices received by producers for goods transacted in Mining (30.1%) and Electricity and gas supply (0.9%).

The employed persons recorded an increase of 2.6 per cent in third quarter 2018 to 14.9 million persons based on the Labour Force Survey.

The Leading Index indicates the direction of our economy in average of four to six months ahead has already given us the sign to expect that Malaysia’s GDP for the third quarter of 2018 to grow slower than the second quarter 2018.