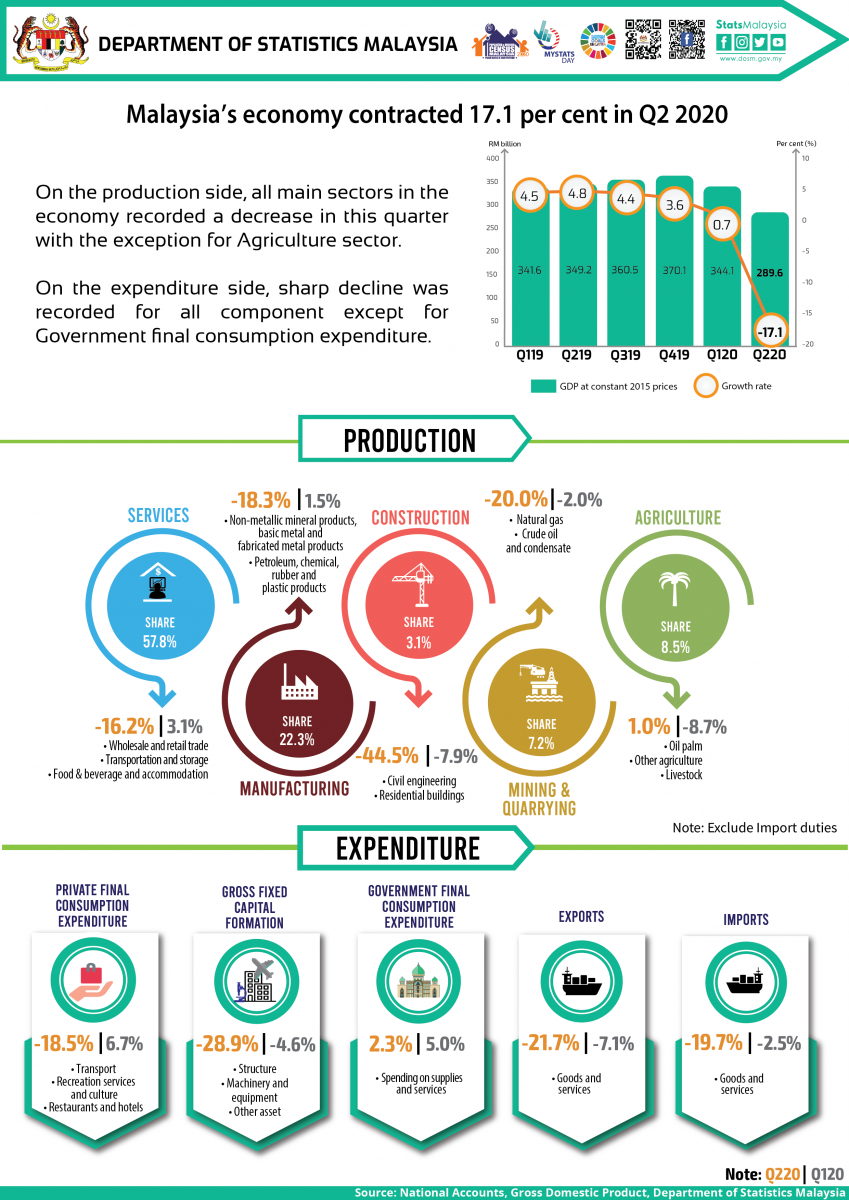 Malaysia’s GDP contracted 17.1 per cent from a marginal growth of 0.7 per cent in the first quarter of 2020. The performance for this quarter was the lowest recorded since the fourth quarter of 1998 (-11.2%). On the production side, all sectors recorded a negative growth with the exception for Agriculture sector. Services and Manufacturing sectors were recorded a negative 16.2 per cent and 18.3 per cent respectively. Construction sector plummeted 44.5 per cent while Mining & quarrying declined 20.0 per cent. On the demand side, all final demand components declined except for Government final consumption expenditure which recorded a positive growth of 2.3 per cent. Private final consumption expenditure decreased 18.5 per cent, Gross fixed capital formation contracted 28.9 per cent, Exports dropped 21.7 per cent while Imports declined 19.7 per cent.

The compilation of GDP for second quarter of 2020 has been further improvised with the additional estimation of monthly GDP in measuring the current economic performance. The initiative of this new statistics will provide more informative statistics for users. Based on monthly GDP estimates, the sharp decline in the economy was observed in April 2020 whereby GDP contracted 28.6 per cent, while the performance in May improved to negative 19.5 per cent and continued to further improve in June by registering a small contraction of negative 3.2 per cent. The slower contraction in June was observed in all sectors especially in the Manufacturing and Agriculture sectors which posted a positive growth of 4.5 per cent and 11.0 per cent respectively, while other sectors posted a slower contraction (Construction: -12.7%, Mining & quarrying: -16.4% and Services: -6.0%).

In June 2020, Malaysia’s exports performance signals recovery from the impact of COVID-19 pandemic by registering a positive growth of 8.8 per cent to RM82.9 billion resulting trade surplus attained RM20.9 billion, the largest value ever recorded. Meanwhile in May 2020, Malaysia’s trade contracted by 27.8 per cent year-on-year.

Tourism oriented sectors were among the highly contracted as such food & beverages and accommodation services, travel agency, transportation, host of conference, recreation and sport industries due to the travel restrictions and closure of national borders. International tourism expenditure contributes more than 50.0 per cent to national tourism sector.

Other indicators such as sales and vehicles registration declined sharply for April and May 2020 which impacted the performance of motor vehicles segment for second quarter of 2020. Meanwhile, government initiative in introducing full exemption for passenger car Completely Knocked Down (CKD) and 50.0 per cent for Completely Built-Up (CBU) models provide an advantage to the recovery of this segment’s performance.

As an open economy, Malaysia’s degree of openness is 123.0 per cent (2019) which is among the highest in the world. This is explained by the percentage of total trade for goods and services towards GDP. The GDP performance of second quarter was also affected from the weakened external sector due the spread of COVID-19 in 210 countries. Thus, the lethargic demand has affected the production of manufacturing for export-oriented based industries which declined 13.5 per cent that shaped 71.0 per cent of the Manufacturing sector’s value added. Total trade for this quarter declined 14.7 per cent as compared to the second quarter of 2019. The gloomy growth of Malaysia’s trade can be observed from the total transactions where 7.9 million transactions was recorded in second quarter of 2020 as compared to 11.4 million transactions from the correponding quarter of preceding year.

In this quarter, labour utilisation which was one of the factor of production in the economy was yet to reach the optimum level as business operations began to resume gradually following the implementation of the MCO. The slower performance of production due to lower labour demand have impacted the labour market. The number of employed persons in this quarter declined by 1.3 per cent to 14.88 million people as compared to the the correponding quarter of preceding year. In this situation, the smaller reduction in employed persons as against a significant decline of GDP is seen as a positive impact of the implementation of various initiatives by the Government, among others was the wage subsidy programme in the effort to ensure employees retention.

Although the businesses is keen towards the usage of technology, majority of economic activities in Malaysia are labour-intensive industries. This is reflected from the present labour market situation where more than half of jobs and vacancies are in the semi-skilled category.  Furthermore, 48.4 per cent of employment are in small and medium enterprises. Given this, remote working or working from home during the MCO was a challenge since businesses required some time to adjust to the new norm.

Leading Index showed an improve signal in May 2020 which is in line with the reopening of business activities under the CMCO starting from 4th May 2020 after economic activities “froze” in the previous month. The implementation of the stimulus packages Pakej Rangsangan Ekonomi Prihatin Rakyat (PRIHATIN), Pelan Jana Semula Ekonomi Negara (PENJANA) and the short-term economic recovery plan to cushion the COVID-19 impact are expected to alleviate further the economic downturn and is gradually the economy to pick-up in the third quarter of 2020.

Accurate and timely data are vital to create effective evidence-based policies. With the given information in this release it will be useful and beneficial to all key stakeholders and to the nation.