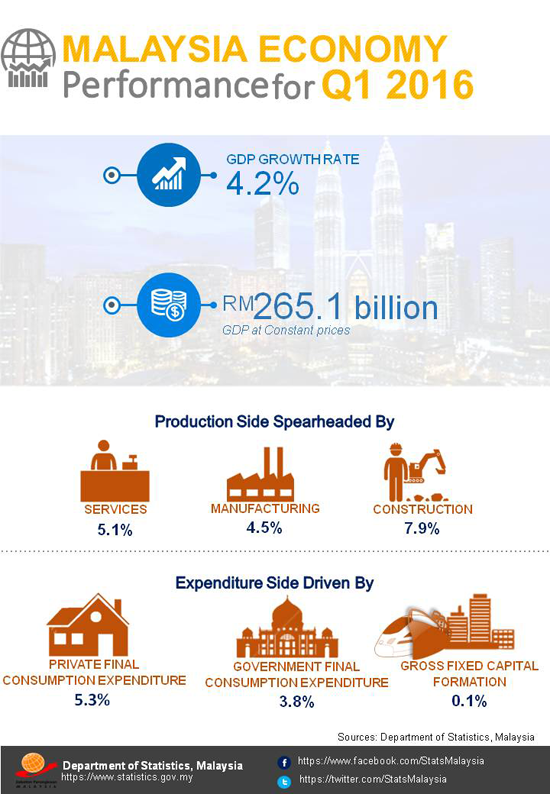 Malaysia’s economy registered a growth of 4.2 per cent (Q4 2015: 4.5%). On a quarter-on-quarter seasonally adjusted, the GDP for first quarter of 2016 grew 1.0 per cent.
In this quarter, all sectors on the production side posted a positive growth except for Agriculture. The continuous expansion in the Services, Manufacturing and Construction has led the growth and remained as the main catalyst.
On the expenditure side, the economy was spearheaded by Private Final Consumption Expenditure and Government Final Consumption Expenditure. The expansion in both consumptions has offset the sluggish performance in external demand.
Value of GDP in current terms for this quarter amounted to RM291.0 billion.

Manufacturing sector grew 4.5 per cent (Q4 2015: 5.0%) which was underpinned by Electrical, Electronic & Optical products (5.7%), mainly in semiconductors, computers and peripheral equipments. This sector performance was further supported by Petroleum, Chemical, Rubber & Plastic products that grew 2.7 per cent (Q4 2015: 1.4%) following a turnaround in Refined Petroleum products and expansion in Chemical and Plastic products.

Private Final Consumption Expenditure strengthened to 5.3 per cent (Q4 2015: 4.9%) which was stimulated by the consumption on food & beverages, housing & utilities, communication and transportation.

Exports decreased 0.5 per cent in this quarter which was reflected by the subdued momentum in exports of goods. Imports moderated to 1.3 per cent (Q4 2015: 4.0%) due to a contraction in imports of goods.

THE OFFICE OF CHIEF STATISTICIAN MALAYSIA
DEPARTMENT OF STATISTICS, MALAYSIA
13 May 2016