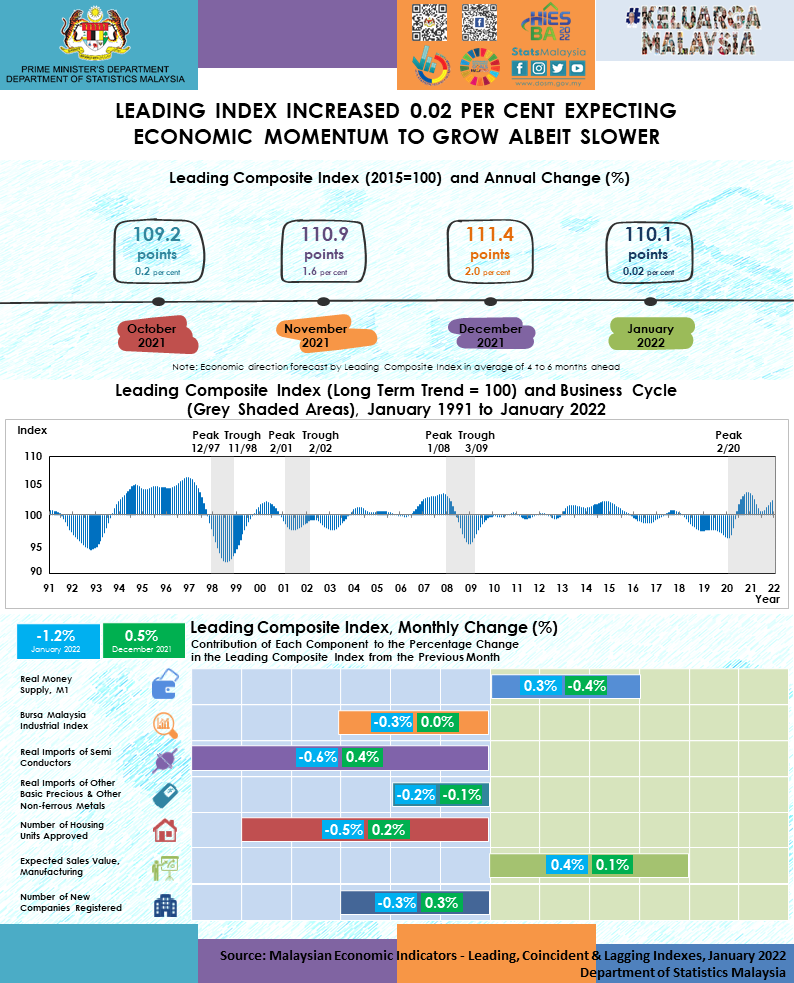 The performance of Leading Index (LI) held steady at 110.1 points in January 2022 with the year-on-year LI increased 0.02 per cent backed mainly by the Number of New Companies Registered. Looking into month-on-month perspective, the LI decreased 1.2 per cent as against 0.5 per cent recorded in December 2021. The decline was mainly influenced by Real Imports of Semi Conductors (-0.6%) and Number of Housing Units Approved (-0.5%). The LI which elucidated the direction of the Malaysian economy remained above 100.0 points and signalled a slower economic momentum in the upcoming months. The outlook is in line with the fully reopening of international borders as the country is entering into the endemic phase alongside the implementation of a new minimum wage to RM1,500 which are expected to increase consumption and support domestic demand. However, the geopolitical conflict and lockdown of China's major cities impose downside risks to the economic prospect if both incidents prolong.

The rapid spread of Omicron variant is not expected to pose a significant effect on the growth of Gross Domestic Product. Looking at the economic situation, the Coincident Index (CI) rose 5.5 per cent to 117.4 points in January 2022 (January 2021: 111.3 points). The same trend was also shown by the month-on-month comparison which recorded 2.5 per cent (January 2022: 117.4 points; December 2021: 114.5 points). The rise was driven by the incline in Capacity Utilisation in Manufacturing sector (2.7%), Volume Index of Retail Trade (0.2%) and Real Contributions to Employees Provident Fund (0.1%).

The full publication of the Malaysian Economic Indicators: Leading, Coincident & Lagging Indexes, January 2022 can be downloaded through eStatistik Portal.