Improvement of Investment Performance and Evolution of Capital Stock

Overview of Investment
Investment is the key indicator in determining the potential production in the future. Gross Fixed Capital Formation (GFCF) being an important indicator for investment measures the value of fixed assets in the economy of a country. Recently, investment in fixed assets shows a remarkable expansion reinforced by higher capital spending mainly on infrastructure. 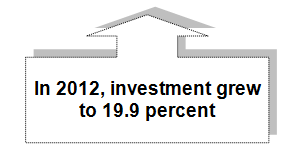 Investment by Public and Private Sector
In 2012, investment grew to 19.9 per cent with a value at constant 2005 prices of RM201.7 billion supported by higher public and private capital spending. Private investment was particularly robust, recording a double-digit growth of 21.9 per cent. Public investment also strengthened to 17.1 per cent driven by higher capital spending by public enterprises. 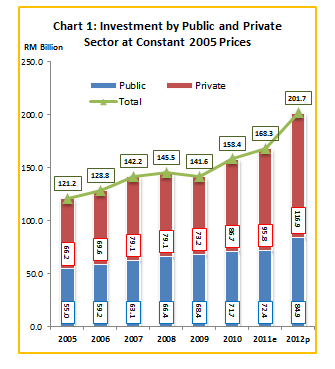 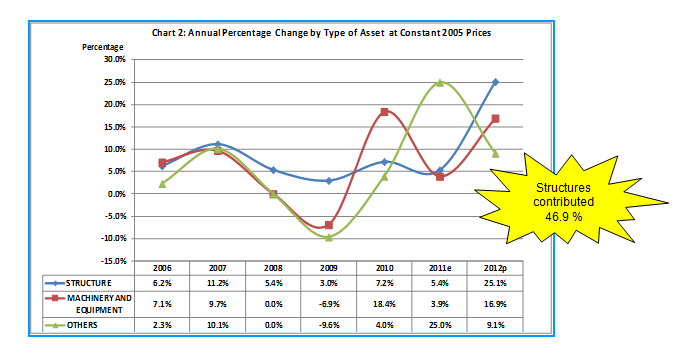 Accumulated Investment Increased 587 Times Since 1955
Accumulated investment in terms of fixed assets which is still operating in the country since 1955 is measured by capital stock statistics. Net capital stock which reflects the market value of the stock of fixed assets in the economy at constant 2005 prices evolved from RM2.3 billion in 1955 to RM1.3 trillion in 2011.
In terms of type of assets, Structure remained as the largest asset in the Malaysia’s economy with a share of 65.5 per cent in 2011. Machinery and Equipment registered RM264.5 billion (19.8 per cent) in 2011 as against RM248.9 billion in 2010. Continued expansion in investment will spur a positive spillover effects to Malaysia’s economic growth despite uncertainties in the global economy. 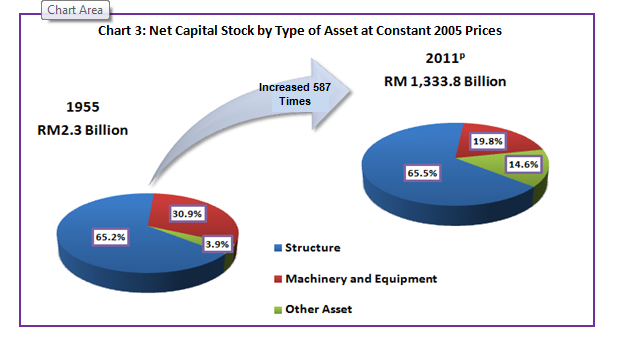