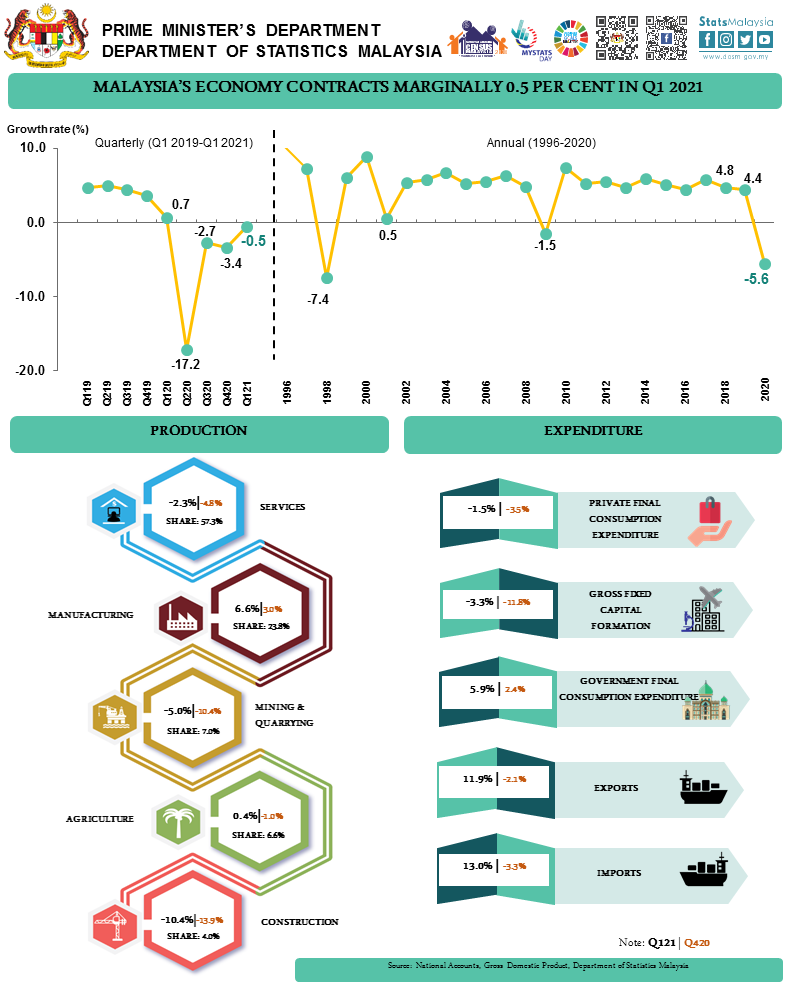 Malaysia’s GDP marginally decline 0.5 per cent in the first quarter of 2021, continues its recovery from a decrease of 3.4 per cent in the preceding quarter, as reported today in Gross Domestic Product First Quarter 2021. The economic performance was supported by the expansion in manufacturing sector and the rebound of agriculture sector. On the demand side, the uptick trend was attributed by the strong growth of exports of goods and services amid a smaller decline in household consumption and fixed asset investment.

In terms of Malaysia's monthly GDP performance, January and February showed a decline of 3.5 per cent and 3.6 per cent respectively and rebounded strongly in March 2021 to 6.0 per cent. For the quarter-on-quarter seasonally adjusted, GDP rebounded to 2.7 per cent (Q4 2020: -1.5%) in this quarter. The gradual recovery of Malaysia’s economy was influenced by the reopening of more economic activities during the Movement Control Order (MCO) 2.0 which is less stringent than the MCO that was imposed last year and also benefitted from various stimulus packages to steer the economic recovery. The economy also spurred by disposable income due to withdrawal of i-Sinar, i-Lestari and the increase in commodity prices such as oil palm and rubber.

The Manufacturing sector grew stronger 6.6 per cent for the first quarter 2021 compared to 3.0 per cent in the fourth quarter of 2020 driven by the Electrical, electronics & optical products (10.6%) and Petroleum, chemical, rubber & plastics products (7.3%). The robust growth of Electrical, electronics & optical products was due to the higher demand of microchips in electronic devices. Furthermore, Transport equipment, other manufacturing & repair expanded further to 8.1 per cent as against 6.9 per cent in the preceding quarter. The continuous positive growth was contributed by the export-oriented industries which grew by 7.2 per cent (Q4 2020: 3.4%) in line with the overall exports performance which recorded double-digit growth of 18.2 per cent in the first quarter of 2021. Similarly, the performance of the domestic-oriented industries increased by 5.3 percent (Q4 2020: 2.4%) for the quarter.

Services sector which was a major contributor to the Malaysia’s GDP, decreased 2.3 per cent from a decline of 4.8 per cent in the previous quarter. The slower decrease was due to the rebound in the Wholesale and retail trade sub-sectors which recovered modestly at 1.2 per cent (Q4 2020: -1.4%) in the first quarter of 2021. Moreover, Finance and insurance; and Information and communication sub-sectors continued its expansion to 11.3 per cent and 6.3 per cent respectively. Nonetheless, Services sector remained in negative growth partly due to the Food & beverage and accommodation sub-sectors which fell 29.8 per cent (Q4 2020: -35.3%), improved slightly from the previous quarter. The improvement of Food & beverage and accommodation sub-sectors was due to the easing of MCO 2.0 whereby restaurants’ operating hours have been extended and dining-in was allowed as well as interstates travel was permitted for states under the RMCO to encourage domestic tourism activities. On the same note, Transportation and storage sub-sector decreased 16.2 per cent (Q4 2020: -23.0%), influenced by the decline in all segments except for Postal & courier which recorded a double-digit growth due to the increase in online shopping during MCO 2.0.

All components of expenditure shows a sign of recovery. This was mainly led by Exports and Imports which rebounded to a double-digit growth mainly supported by the expansion in goods. Meanwhile, exports of services continued to decline as national borders are still closed for travelling activities.

Private final consumption expenditure which contributed the most on the demand component, posted a smaller decrease of 1.5 per cent (Q4 2020: -3.5%) influenced by the expenditure on essential items namely Food & non-alcoholic beverages; Housing, water, electricity, gas and other fuels and Communication. In addition, Restaurants & hotels; Recreation services & cultural; and Furnishing, household equipment and routine household maintenance which were non-essential expenditure indicated a slower decline in this quarter. As the battle of COVID-19 continues, the consumption on Health increased at a marginal growth after registering a decline for three consecutive quarters.

Gross Fixed Capital Formation (GFCF) or investment on fixed assets registered a smaller contraction of 3.3 per cent in the first quarter of 2021. The recovery of GFCF indicated an improving trend which was backed by the double-digit growth in Machinery & equipment after recording a contraction for the past nine quarters. The gradual improvement of GFCF can be seen as a catalyst for higher economic capacity to uplift the production of the future output. Furthermore, the Government final consumption expenditure rose to 5.9 percent (Q4 2020: 2.4%) due to higher spending on supplies and services in this quarter.

In Malaysia, the spike of COVID-19 cases following the new wave of infections since the fourth quarter of 2020 has prompted the reinstatement of CMCO in various states. Subsequently, the worsening of the pandemic has led to reimposition of MCO 2.0 in six states since 13th January 2021 and was expanded to almost all states. Nevertheless, MCO 2.0 allows more economic sectors to operate with strict Standard Operating Procedures (SOPs) and this may lessen when immunisation started in February 2021 by targeting over 26 million Malaysian residents. The National COVID-19 Immunisation Programme (PICK) is expected to restore business confidence and improve the country's economic growth. Likewise, short-term economic indicators namely Leading Index (LI) for February 2021 signals Malaysia is heading towards an economic expansion in the upcoming months.

The full publication of  Gross Domestic Product, First Quarter 2021 can be downloaded through eStatistik portal. 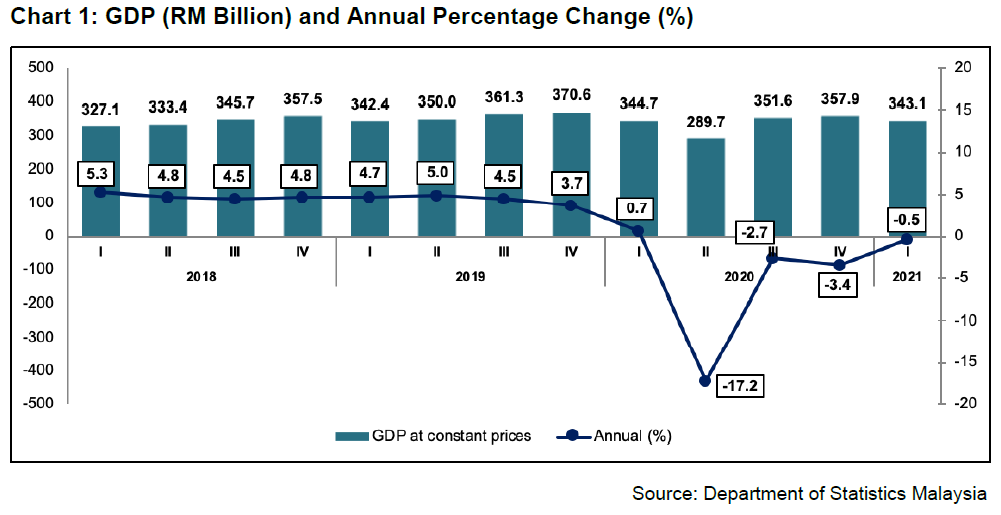 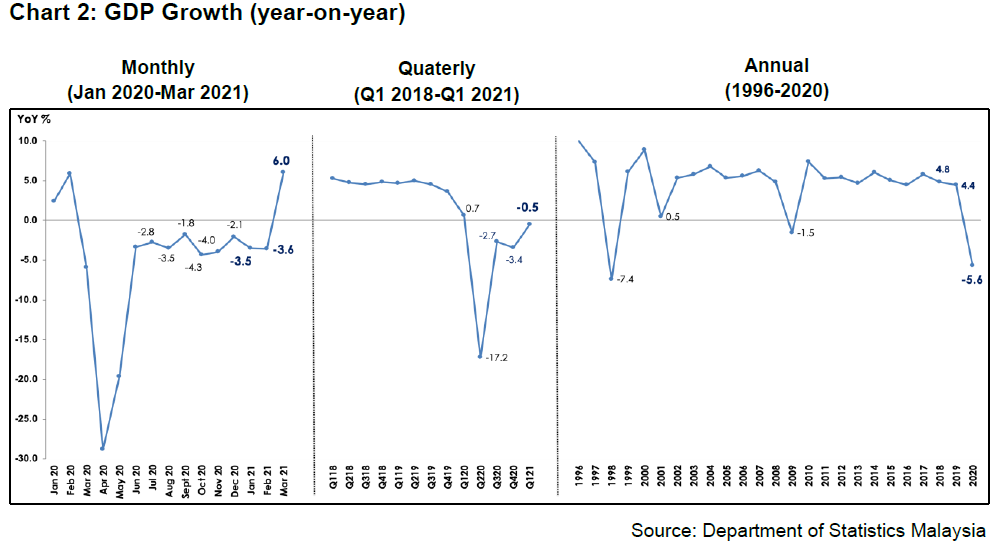